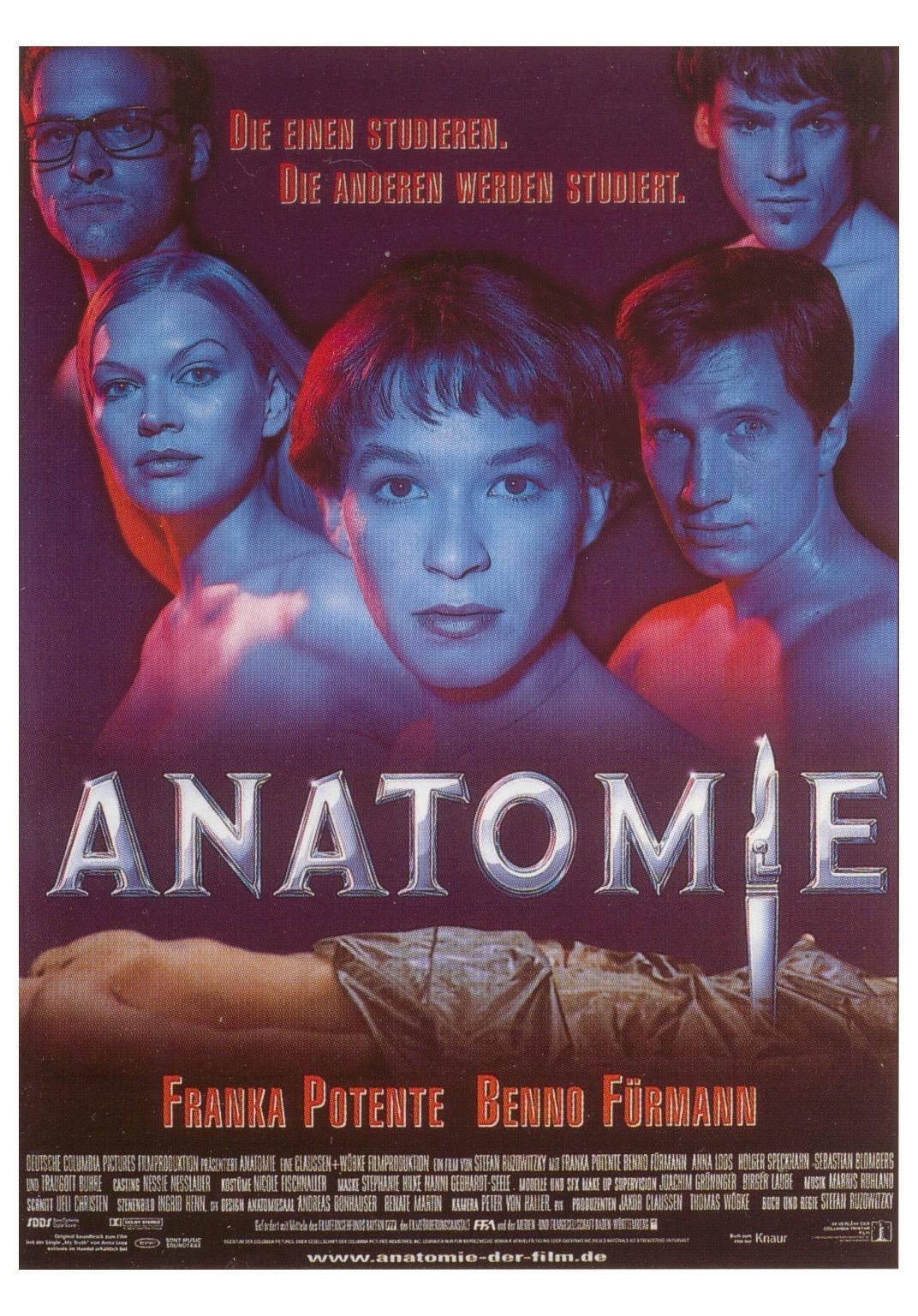 Once the slasher film left the 80's, it went to a very strange place. It died twice during the decade itself (once in 1983 and once in 1989) then lay dormant, rattling around in Direct to Video Hell until Scream dragged it kicking and screaming from its shallow grave in 1996. Thus was the beginning of the age of postmodern meta humor, take it or leave it. By the turn of the century, it was pretty uncool to be a straightforward slasher film.

In America, that is.

Not that "gravity" means "no exploitation." This is the slasher genre we're talking about.

Pretty understandably, Anatomy is all about the human body: Young college student Paula Henning (Franka Potente of the terrific Run Lola Run) is the top med student in her class. When she is sent to a  special summer program at a prestigious Heidelberg university, she is ready to buckle down and study harder than she ever has. The only problem is, her classmates are less concerned with the bodies on the slabs than they are with each other's.

Her roommate Gretchen (Anna Loos) is a bit of a woman about town, juggling hunky but sensitive RA Hein (Benno Fürmann) and the surprisingly buff nerd Phil (Holger Speckhahn), and her classmate Caspar (Sebastian Blomberg) won't rest until he can rub his weird soul patch all over her. To make her distraction even worse, she discovers that the university may be run by an ancient secret society known as the anti-Hippocrates: a sect which illegally experiments on still-living humans and turns them into plasticine exhibits with a fast-acting preserving agent called Promidal. 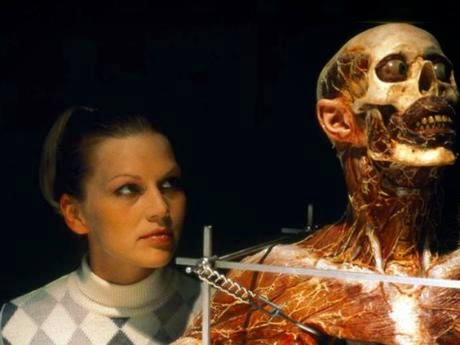 Anatomy is, on the surface, one of the most average horror flicks ever conceived. Its pretty, twenty-something cast is dispatched in gruesome ways but the gore is kept offscreen as much as possible, there's a sumptuous smorgasbord of fake scares, and a series of third act reversals spin the film 180 degrees so many times that it gets dizzy and collapses, the killer is still alive, quip, quip, and roll credits. But if you grab your scalpel and forceps and peel back the surface layer, there's some really interesting structures hiding underneath. Let's get to dissecting!

Adrenal System: The film is full of shallow, airbrushed scare sequences, but plenty of the rest is mighty chilling. The film's use of the fictional drug Promidal is perhaps its most effective invention, because it allows for a series of scenes where people fight their own stiffening bodies to try and find a way to survive. Also, the props in the body exhibit are exquisitely manufactured pieces of gorgeous grue, and a library scene in the third act uses the claustrophobic shelves to nail the audience to their seats, redeeming itself for its somewhat anticlimactic act 2 break, which mightily deflates the tension in order to allow Paula to take a train ride and find out a secret about her grandfather, who used to work at the university. Needless to say, it's no big surprise and we could have found that out in a 30 second montage instead of a five minute sequence.

But I digress. There is certainly enough material in Anatomy that works at a gut level to keep it lively and entertaining throughout.

Skeleton: The unequivocal best (and most consistent) elements of the entire film are the production design and the cinematography. The anatomy hall is given an imposing grandeur with slick, faceless metal walls that threaten to engulf everything within them, working with the camera to create immensely clean, precise, flowing images that are almost scientifically perfect. 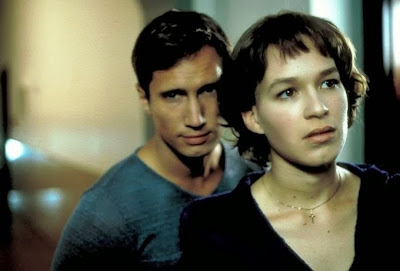 Heart: The Germans aren't exactly known for their humorous stylings, but the comic heart of Anatomy is top notch. The interactions between the students provide a warmhearted comic relief, with several preternaturally well balanced one-liners, my favorite of which is, "Do me a favor and let me know the next time you take your clothes off." That one is going straight into my repertoire.

Sex Organs: What the Germans are known for, however, is their unconventional sexuality, which Anatomy delivers in spades. I'll have to check with the film historians on this one, but I'm pretty sure this is the first time any two characters have hooked up on an autopsy table that was just used to dissect a ruptured spleen. I swear, nothing turns on Gretchen and her cronies more than the prospect of some illicit bangers and mash next to a couple dozen goggle-eyed corpses.

On top of its unerringly interesting approach to sex, Anatomy is also remarkably feminist. The Slut character turns out to be the top in her class, the women are fully in control of their sex lives (although the sniveling, hypersensitive men can't exactly handle it), and the film shows nary a single wanton breast, instead focusing on getting its male characters in and out of their shirts as often as possible. In this way it reminded me quite positively of Girls Nite Out, the single best purveyor of man meat in all of slasherdom.

My absolute favorite scene in the film is when a girl finally sleeps with her long-awaited suitor... to pass the time before a meeting.

This is the part where I thank Sergio for buying me Anatomy and its sequel to fill out his Amazon cart. (And get him off my back for not mentioning him a lot recently. I guess anonymity isn't as important as I thought. Hi Sergio!)

Brain: Although the third act reveals never entirely makes sense, Anatomy does have a keen brain hiding in its skull cavity. The throbbing undercurrent of the film is of generational discord. Paula wants to be a doctor to prove herself to her famous physician grandfather, ignoring her father's warnings about becoming too concerned with professional success. As she discovers the dark secrets behind the university and the city of Heidelberg, she realizes that the ancient atrocities committed in the town have never truly died away.

As Paula attempts to uncover the past and save lives in the present, she learns that there's no escaping history. The entire film is plagued by the sins of a past generation, mirroring the country itself, which will never be able to shake off the ghost of the Third Reich. It's really rather poetic and it adds a thoughtful, deeper meaning to what otherwise could have been an entirely boilerplate affair. 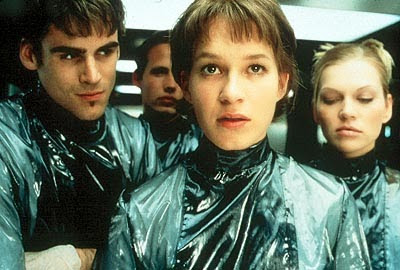 Grey's Anatomy with more stabbing, if you will.

At the end of the day, nobody is going to be busting out their Anatomy disc at parties or anything, but the film is a decent millennium slasher thrill, and worth checking out for medium-strength fans of the genre.

Champion Dialogue: "Don't worry, those red spots are only pubic lice. You'll be fine!"
Body Count: 7
TL:DR: Anatomy is a generic modern slasher thriller, but it has enough heart and soul to make it a thoroughly interesting watch.
Rating: 6/10
Word Count: 1293
Also sprach Brennan at 9:20 AM