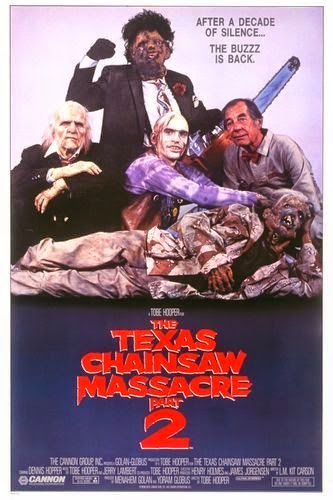 Is The Texas Chainsaw Massacre 2, coming out 12 years after the original film, one of the longest sequel gaps in recorded history? Actually, yes. It comes in at around number 21, beaten out by none other than the 46 year gap preceding Return to Oz, among a few additional elder statesmen of film franchises. But although it's not the most impressive hiatus in cinema history, I'd like to argue that it's one of the most impactful.

1974's The Texas Chain Saw Massacre saw Tobe Hooper as a hungry young filmmaker, eager to rattle the walls of the nihilistic and beaten-down 1970's with the oppressive heat of Texas. But as the years passed, the times drastically changed. Hooper failed to recapture the grubby magic of Texas Chain Saw in Salem's Lot and The Funhouse, saw creative control of Poltergeist wrested away from him by producer Steven Spielberg (exactly how much control he ceded is still the topic of furious debate and a topic far too complex for a mere frail parenthetical), and hit rock bottom with his high budget space vampire flop Lifeforce.

As Hooper's life-force (so to speak) was draining, the country itself was beginning to perk up. The economic downturn that permeated the previous decade had begun to reverse itself and the populace began to turn to rampant consumerism once more. Nuclear fears, Reagan's presidency, and the AIDS crisis were still occupying people's minds, but the nation had taken an upward tack that would spring them forth into the blissful 90's.

Even more significant to the film we are discussing today is the massive face-lift the horror genre had received since the original Chain Saw. The slasher boom had come and gone, rising like a phoenix from the ashes of Friday the 13th: The Final Chapter with the advent of the supernatural, heralded by A Nightmare on Elm Street and its soon-to-be comic superstar Freddy Krueger. The enduring popularity of the slasher formula ruled the silver screen, seeping into films to the point of exhaustion; by the mid-80's even ghost and exorcism stories had to have a supple teen cast picked off one by one and even movies completely outside the genre fell victim to this insidious disease.

The genre ushered into being by Texas Chain Saw soon found no use for its brutal, unappealing, nihilism and squalor, so Tobe Hooper was faced with a tough decision. A sequel to his immensely popular film could reboot his career, but there was just no space in the market for something so grim and intense. This post is getting a little long in the tooth and I haven't even mentioned a single character yet, so I'll cut to the chase. Let me direct your attention to the poster at the top of this post, then to the image below. Seem familiar? 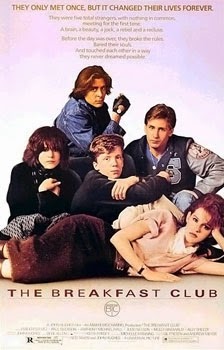 Unless you have the attention span of a Drew Barrymore character, it should.

I hope it has become immediately obvious that Hooper decided to adopt a comedic tone with The Texas Chainsaw Massacre 2. It's by no means an outright comedy, but it is light years more lighthearted than its predecessor. Filled to the brim with pop culture references (among other mentions, we get Rambo 3, the censored Beatles baby massacre cover, and enough rock and roll bands to fuel the cocaine market for a small country), silly props, and even - I kid you not - a couple puns. That's 100% more wordplay than The Texas Chain Saw Massacre.

It's an interesting decision but by no means a bad one. Trying to recreate the original film's mood would be like Will Smith having a kid - it wouldn't turn out as good and nobody would want to see it. Especially with the amount of story beats that are copied from the original, it's a definite bonus to have a new tone to chew on - it keeps things lively and entertaining.

But for all the repetition this film has (including an almost word for word recreation of the dinner party scene), there is a heaping helping of brand new elements that keep the films firmly planted in its new wacky atmosphere. Our new Final Girl (if any Chain Saw chick could truly be considered one) is Stretch (Caroline Williams - a genre veteran with appearances in Stepfather 2, Halloween II, and Hatchet III to name just a few), an Oklahoma rock 'n roll DJ with a passion for just about anything other than being stuck in a rinky dink booth surrounded by old records.

After a pair of prank callers (Who are two of the most poisonously douchey characters in the history of cinema. Never have I wanted a set of opening scene characters to die more and I lived through the anthropomorphic nuclear waste that is Harold and Edna of Friday the 13th Part 3.) are chainsaw massacred while phoning into the station from North Texas, Stretch teams up with Lieutenant "Lefty" Enright (Dennis Hopper), the uncle of Sally and Franklin from the first film (Though later he acts like an older brother, so who can be sure? Not Hooper, if the amount of pot he smoked in the 80's has anything to say about it.).

Lefty has been searching for the mysterious cannibal family for over a decade and uses Stretch as bait to draw them out into the open. 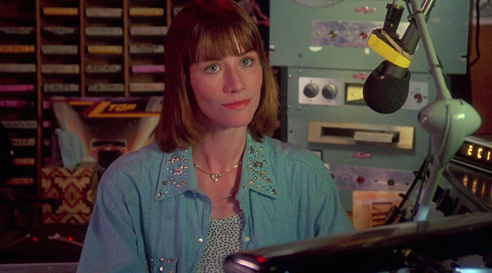 A brilliant plan - that sequined jacket is visible from space.

One thing leads to another and Stretch is trapped underground with the villainous Sawyers in their new abode - an abandoned theme park. Returning by popular demand are a rather svelte looking Leatherface (Bill Johnson), his even more withered grandfather (Ken Evert), and his father the Cook (Jim Siedow, the only returning cast member). And although Leatherface's brother the Hitchhiker found himself on the wrong end of a Mack truck last go-around, he finds a surrogate in Chop-Top (Bill Moseley, another genre veteran also in Texas Chainsaw 3D, Halloween 2007, Army of Darkness, Silent Night, Deadly Night III, and perhaps most notably, Evil Bong), an equally crazy Sawyer brother newly returned from his stint in Vietnam.

Despite the immense shift in tone which, despite not being an outright laugh riot, is quietly successful in its own way, Hooper is up to his old tricks but with a little more stylistic panache. That is to say, this film is more overtly styled than Texas Chain Saw, not that the aesthetic is any better. Although comparing the visual schema of that film and its sequel is like comparing apples and ball gags - they're both highly effective but serve entirely different functions.

In this film, Hooper indulges in a color scheme beyond brown and grey, splashing vivid reds, blues, and greens across the frame in broad swaths. Especially in the terrifically manic nightmare theme park set that contains the third act, this creates a sense of carnival thrills and spills, rather making up for everything that 1981's The Funhouse isn't. 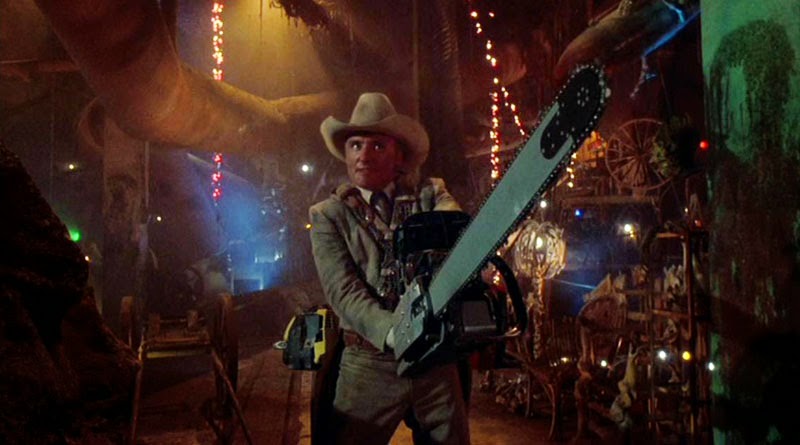 The Funhouse could have definitely used more chainsaws. Or more Dennis Hopper. Or more... anything that isn't me crying tears of boredom.

And in spite of everything, there are moments when Texas Chainsaw Massacre 2 is actually scary. Because the franchise is so palpably deranged and twisted, these moments rely more on character dynamics than jump scares so it's a tremendous boon that the replacement actors are almost entirely top notch. Johnson obviously can't do quite as much with Leatherface as Hansen could, but his performance darn near cuts it close, adding an extra dimension to the character in what could have been a tremendously clumsy love subplot using naught but his eyes and tongue.

Likewise, Bill Moseley is an excellent addition to the family, revamping Edwin Neal's frenzied Hitchhiker for the modern age and seamlessly straddling the twin tones of comedy and horror, milking each one for everything they're worth. And the gore (of course there's gore now, it's 1986 for crying out loud) is spruced up by maestro of the macabre Tom Savini. It's perhaps not his best work, but Savini on autopilot is still Savini, which means that the effects could still run circles around the dime store VFX artists of whatever the hell else came out in 1986 (which includes Sorority House Massacre and Killer Party - not exactly firm competition. Supple, maybe. But not firm.)

On the other hand, we have Dennis Hopper. Though nobody who's ever seen a single work of cinema would consider his performance "great" (unless, that is, Texas Chainsaw Massacre 2 is that single work of cinema), he brings a focused lunacy to the role that is captivating. This is a character that exists in quite a different universe than the rest of the film, brandishing chainsaws and screaming epithets at nobody in particular, oftentimes while standing alone in locations quite far from the action. He throws himself into the role headfirst, shaking up every idea one might have about the craft of filmmaking for better or for worse. 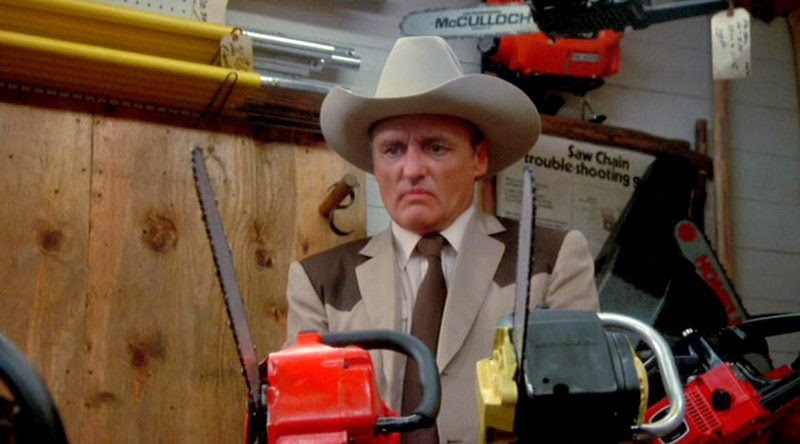 It's a legitimately tough call on that one.

So really, there's a lot to like about the film. However, it loses major points for its frequent reverting to tried and true story beats and the slower moments are a mite too slow, dragging the film like a half-open parachute. And although there's plenty to chew on about the effects of Vietnam and long-term poverty, the political fire isn't in Hooper's eyes as much as it was when he was 12 years younger.

But in spite of all that, The Texas Chainsaw Massacre 2 is a rousing success, plying the audience with legitimately great performances of iconic characters, legitimately ludicrous performances from a well-known actor, and enough Savini-honed nightmare fuel to keep the whole thing going down smoothly.

Killer: Leatherface (Bill Johnson) & Co. Pretty much everybody kills everybody else.
Final Girl: Stretch (Caroline Williams)
Best Kill: Buzz proves that his name is appropriate by getting his skull cap sawed off. 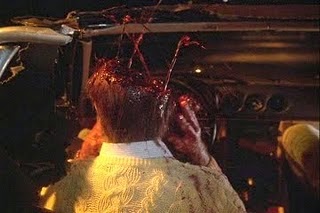 Sign of the Times: A picture can say a thousand words. Two pictures can prove my point. 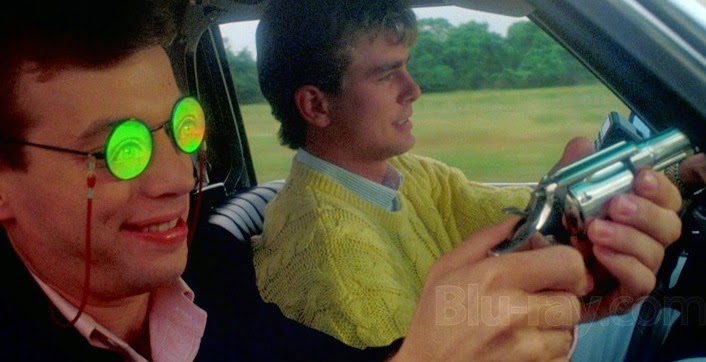