Come Back To Texas 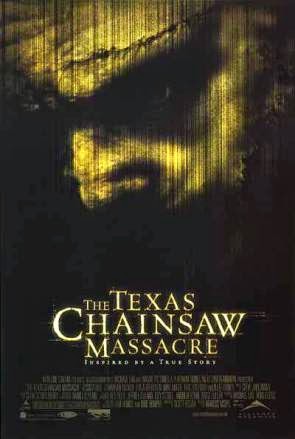 In the past decade, the horror community has been inundated with remake after remake after remake. These types of films have always been around, even in the 50's and 60's and back, but since the mid-2000's there has been an overwhelming glut of the tepid things. Just on this blog, I've covered a small army of them including Carrie,  Evil Dead, Fright Night, The Last House on the Left, A Nightmare on Elm Street, Prom Night, and The Wizard of Gore, and there's easily ten times that amount on the market today.

With most cinematic movements, it's hard to tamp down a true ignition point. There tends to be several films around the same time that coalesce into the beginning of a new wave of filmmaking, like how the proto-slashers The Texas Chain Saw Massacre and Black Christmas came out within weeks of one another in 1974. Luckily for us, the remake boom has one clear culprit.

In 2003, Michael Bay's new production company Platinum Dunes released their first of many many many low budget remakes - The Texas Chainsaw Massacre. As if you couldn't have guessed that already. 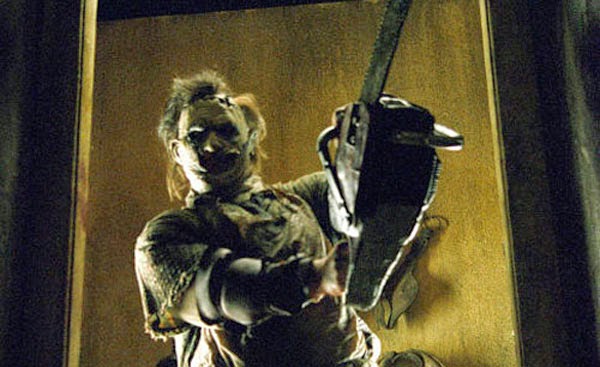 I really shouldn't bury the lede in reviews where I stick the poster on the top.

The film was such a sterling success that other studios immediately hopped on the bandwagon and began pumping out updates on their long dormant horror franchises, prominent and obscure alike (and if anybody has any insider information on how the hell Mother's Day got remade, please contact me immediately). What most of them seemed to miss was the fact that Texas Chainsaw was actually pretty good.

But we're not here to talk about the tsunami of crappy remakes. We're here to discuss their pretty good progenitor and the influence it has - for better or for worse - over the narrative and aesthetic stylings of the ensuing decade.

The first of these is immediately apparent. Though the characters in this film have no obvious analogue with the original Texas Chain Saw Massacre, they are exponentially more attractive. In fact, if we view beauty as the equation x=log2(3^10) with x being the proportional attractiveness of the current cast over the classic cast, the results would be math. 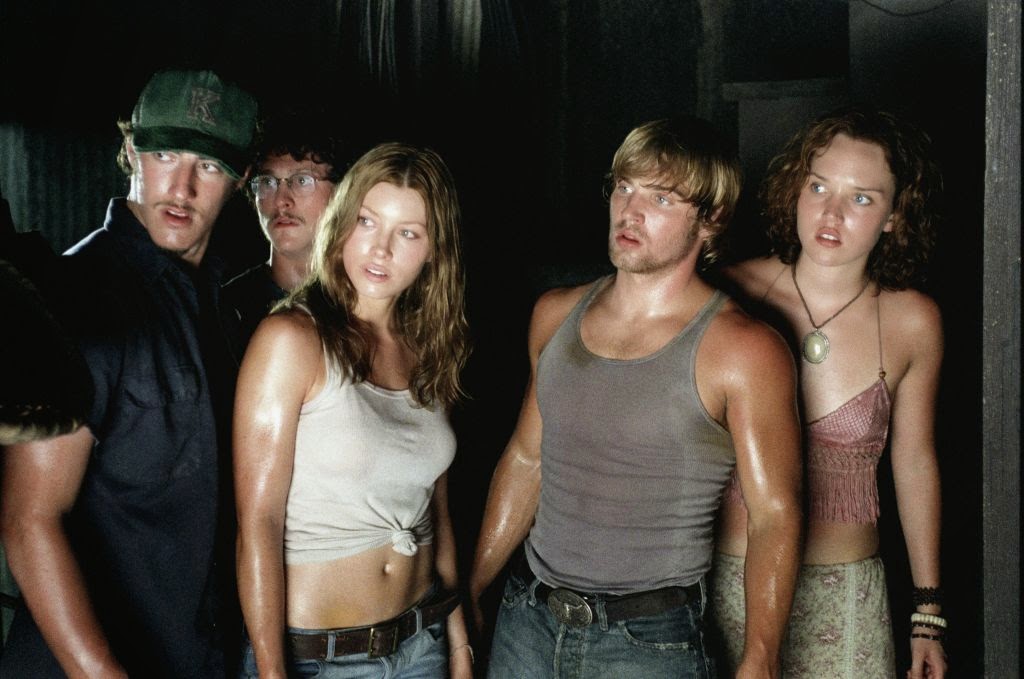 Our Meat for the evening, and by any definition, the film doesn't view them as more than that, are Morgan (Jonathan Tucker, also from The Ruins), a sexy nerd-stoner who combines the most annoying traits of both stereotypes and whose every line of dialogue sounds like vomit dribbling from the gaping maw of a mad drunk; Andy (Mike Vogel, the sexy outlaw from Under the Dome), the sexy rebel - a real stretch, performance-wise; Pepper (Erica Leerhsen of Book of Shadows: Blair Witch 2), a sexy hitchhiker whose thirst for Andy rivals Leatherface's thirst for blood; Kemper (Eric Balfour of the first episode of Buffy), the sexy hick with a chip on his shoulder; and Erin (Jessica Biel of The A-Team), the sexy girlfriend of said sexy hick - soon to be his sexy fiancée if he has anything to say about it.

The kiddos are driving through the countryside to a Skynyrd concert in Dallas. As if that wasn't tip-off enough, Texas Chainsaw is set in 1973, the same year as the original film. On their way they pick up another Hitchhiker (Lauren German), who blows her head off after shouting about her friends all dying. They pull off at the nearest gas station and are sent to a mill to await the Sheriff. As they wait and wait, they soon realize the nearby house will become their final resting place as Leatherface (Andrew Bryniarski), the Sheriff (R. Lee Ermey), and their family send them one by one to the basement workshop to be chainsaw massacred. 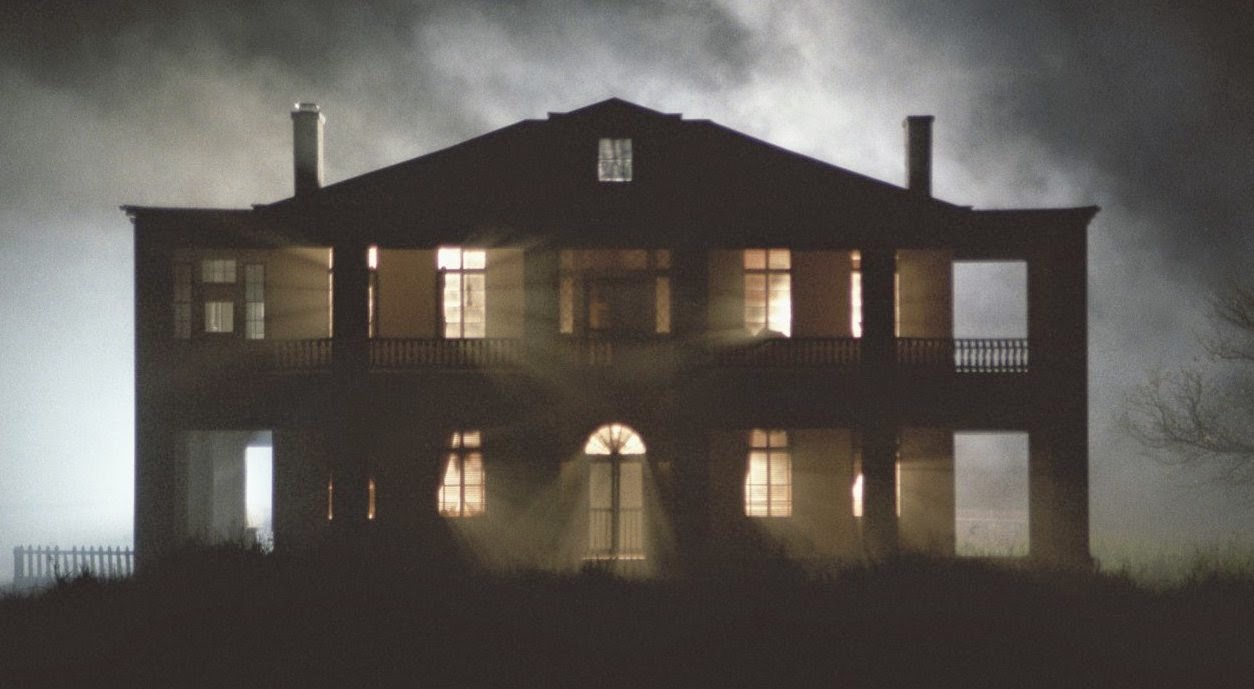 To be fair to them, how could this lovely home seem like there might be killers hiding inside?

The great thing about The Texas Chainsaw Massacre is that it can be taken on its own. Its plot intersects with the plot of the original at so few points, it actually becomes a distinctly separate movie. This is greatly to its favor, because comparing any single horror film to Texas Chain Saw is like flinging spaghetti at a dartboard and hoping for a bull's eye.

And there are even some cases where the film - I wouldn't say "improves on," but it... extrapolates certain sequences from the Chain Saw structure to great effect. It is debatable whether this film's increase in gore improves the horror (I personally don't find it to do so - it's suitably disgusting and wet, but I find the whole film to be a little too slick to get under the skin), but something must be said for a girl watching a hulking killer attack while wearing her boyfriend's face. And a sequence with a meat hook and a piano is delightful in a sickening kind of way.

The film isn't afraid to up the ante and in today's world of anonymous studio horror, that is a quality to be much admired. Texas Chainsaw allows us to explore the entire deranged town, visit the nearby slaughterhouse, and see just how far gore prosthetic technology has come since the last entry in the franchise in 1994 (or 1997, once Matthew McConaughey got his way).

This gleeful excess is mirrored in the deliriously drippy and wet production design, which seems to have been inspired by that time I walked to class on a rainy day and forgot an umbrella. That or the filmmakers' fervent desire to keep Jessica Biel as soaking wet as possible. It's hilarious. No matter where she goes it rains on her, whether it be literal rain or the inexplicable flooding of Leatherface's workshop. At one point she manages to find a refuge but Leatherface triggers the fire sprinklers because the teen boys in the audience would likely implode if she spent one second without her sopping bosoms flapping about. 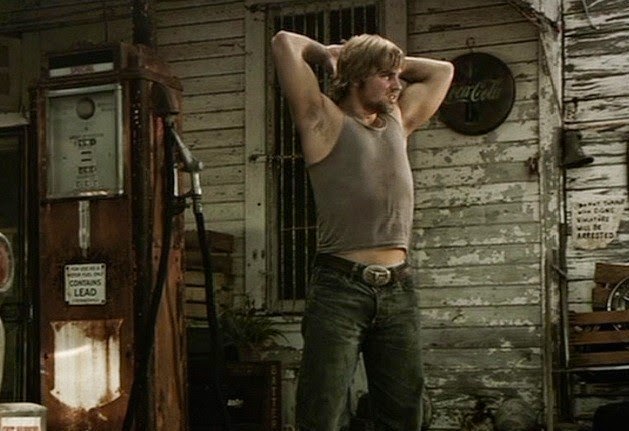 And yet this guy keeps his shirt on. Wasteful.

Joke all I might, I do enjoy my share of needlessly exploitative horror. It's always delightful to watch the filmmakers' obvious desperation to sexify even the most harrowing of scenarios. There's enough hot dudes around to not feel particularly misogynistic. But let me expound my theories on sexuality and exploitation in its own essay, I don't want to bog down this post like so much rainwater.

Here comes the part in the positive reviews where I dump all the negative things I have to say. Because, succeed as it might in distancing itself from Texas Chain Saw, this film is a remake and is thus beholden to comparisons. I've already mentioned the movie's distancing slickness, but the cold grey "gritty" aesthetic just doesn't do it for me in terms of this franchise's narrative universe. I associate Texas Chainsaw with oppressive heat and claustrophobia and that is just not the feeling this film gives off.

It's altogether shallow, and the film follows suit. Gone are the first films intensely angry political sentiments. It's understandable. 2003 was a wildly different societal climate than 1974, though the original time period has been needlessly retained (in fact, Erin's irritating moralizing stances, the fashion, and speech patterns actively disagree with the time period).

There's more gore but less personality, and it's not necessarily a lesser movie because of it. It has different aims than the decades-gone original. But it's certainly a more superficial one.

But in spite of these shortcomings, The Texas Chainsaw Massacre is certainly worth its salt. Its ability to be genuinely tense and creative paved the way for the battalions of remakes to come. Unfortunately but predictably, other studios followed the route of "slick and grey is cool" rather than "good horror movies make money" but what are you gonna do?

Watch Texas Chainsaw Massacre. The rest, as they say, is history. Let it confine itself to the books while you enjoy one of the most interesting reboots modern cinema has to offer.