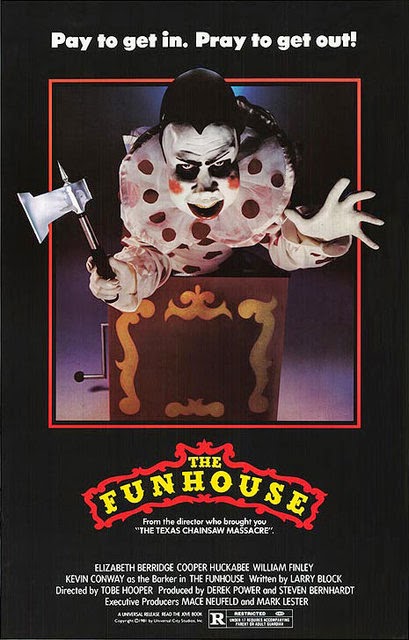 It's October, man! I'm quite excited to get into the swing of things with my Texas Chainsaw retrospective and a special crossover with my friend Hunter over at Kinemalogue (also expect reviews of Chocolat and Fiddler on the Roof because my friends/boyfriend are strange), but in this central month for horror, it wouldn't be good to skimp on my most terror-centric feature: Census Bloodbath!

Skipping ahead a little bit in 1981, today we're visiting another film by Chainsaw auteur Tobe Hooper, his pea soup movie The Funhouse. I call it this because while some people seem to love it, others despise it with a burning, fiery passion. I'm more in the latter camp, though it's a good sight better than some of the crap I've forced myself to watch this September, so you won't catch me complaining. 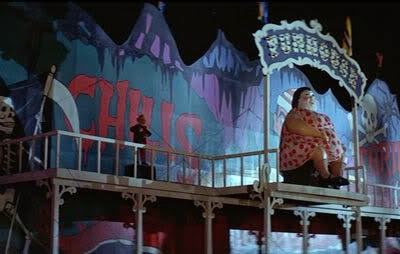 This one frame cost more than the entirety of The Outing.

The man who had a major hand in ushering in the slasher era with his 1974 masterpiece returns with this far more straightforward teen fright flick in the second year of the subgenre's boom. So straightforward, in fact, that the opening scene combines the three most prominent elements of the genre as it stood in the 80's - Halloween rip-offs, Psycho rip-offs, and dumbass fake scares. This is certainly not promising, but later on the film does lift itself up slightly from its slasher roots with a more involved B-plot than its uncouth peers.

Unfortunately, the A-plot is what we're stuck with, and a slate of Meat too undercooked to even be served as tartare. There's Amy (Elizabeth Berridge), the virginal and prudish girl who hates fun; Buzz (Cooper Huckabee), the annoying layabout who tries to impress Amy with his machismo; Liz (Largo Woodruff), Amy's best friend; and Richie (Miles Chapin of Pandemonium), her stoner boyfriend. The foursome decides to double date at the local carnival and spend the night in the funhouse against the objections of Amy for reasons of being annoying.

Although she does have a point, considering that once inside they witness the murder of the carnival's fortune teller at the hands of a Monster (Wayne Doba), the deformed son of the carnival Barker (Kevin Conway). When they get trapped inside, they must dare to face this twisted duo and yadda yadda, bad things, it's a slasher, you get it. 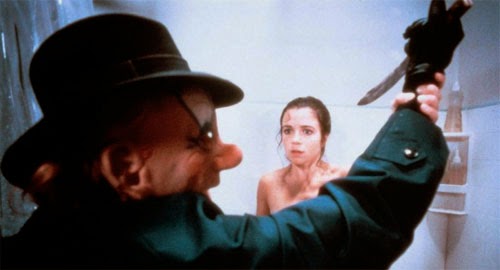 Just to make sure we knew that, they slipped in a shower scene in the opening because there's an unfortunate lack of bathrooms in carnival rides.

Although the film boasts a clever premise and a killer villain (pun intended), The Funhouse is an utterly flavorless genre picture. The first act stretches on into eternity as the bland kids wander around the carnival being douches, which slams into a dull second act with some admittedly grotesque special effects. The film doesn't truly pick up until the final showdown in the third act, at which point it is far too watered down to even come close to the kinetic finale of Chain Saw. It might as well be called "The House" because there certainly isn't any fun to be had here.

Perhaps it's not fair to constantly compare Tobe Hooper's later output with his magnum opus film, but the longer his career stretches, the more the film seems like a cosmic joke we haven't been told the punchline to. And truth be told, Hooper's twisted Texan influence can be felt throughout The Funhouse, but it shoots off in all directions rather than joining together in a focused, heaving mass of depravity.

Some choice picks from a sea of examples include a man who offers a young boy a ride in his truck, then points a shotgun at him, hooting up a storm, a mysterious Bag Lady (Sonia Zomina of Eyes of a Stranger) whose sole purpose in life seems to be covering herself in dirt and shouting at people, and the carnies, all of whom are alcohol-swilling degenerates with no qualms about the exploitation of themselves or others.

Each isolated person or event is creepy, but the aimless tone of the movie prevents them from ever forming a coherent whole. It's just a series of scenes, some creepier than others, that drift along until the halfway point, when the kids finally enter the funhouse and relieve that relentless itching that occurs while waiting for something - anything - to happen.

Step right up and witness the most horrifyingly uninteresting protagonist of cinema history!

OK, it's not all bad. The makeup on the killer is unforgettable. (I shan't spoil it here, but if you wish to take a peek, click this.) There's some interesting stuff buried beneath the surface about generational discord (if you're willing to dig a bit and maybe own an industrial drill), especially with the juxtaposition of Amy's relationship with her dad and the bond between the Barker and the Monster.

And Doba's performance as The Monster is quite thrilling, though coming so soon after the tonally similar Leatherface is a huge hurdle to jump. And once Hooper's style kicks into hyperdrive in the finale, throwing Amy into a hellstorm of rapid-fire editing and jarring color compositions, the shroud of tedium lifts for several sustained minutes.

But all in all, The Funhouse is a dull carnival ride with lifeless scares popping out on springs, but not enough heart to really sell them. The Final Girl is a useless mop who'd scream at her own shoelaces and the story resolves itself almost entirely by accident. There's a pointless subplot about her little brother Joey (Shawn Carson) that steals so much screentime that you're convinced something exciting or game-changing will happen with him. It doesn't.

Its production values keep the whole thing flowing together smoothly, but The Funhouse is far too drab for me to ever want to visit again.

Killer: The Monster (Wayne Doba)
Final Girl: Amy Harper (Elizabeth Berridge)
Best Kill: When Richie is hung by a noose, stolen money spills from his pockets, making it rain on his unwitting friends.
Sign of the Times: Amy uses a pay phone to call her mom. Can you believe people used to need an entire box to make a phone call? How demanding.
Scariest Moment: The Bag Lady emerges from her position crouching in the dirt to shriek at Joey.
Weirdest Moment: Joey apparently decorates his room with medieval weaponry.
Champion Dialogue: "I hate people who preach. Especially in bathrooms."
Body Count: 6

TL;DR: The Funhouse is a tremendous concept with utterly dull execution.
Rating: 4/10