Happy Halloween, everybody! I can hardly think of a better way to celebrate with you all than by reviewing the latest dumbass teen horror flick laboriously shoved into theaters to fill the recently-vacated Paranormal Activity slot. Last year we got the remake of Carrie, which was better than it had any right to be. This year we get Ouija - a film adaptation of a board game adaptation of an ancient spiritual device because Hollywood has devoured every last morsel of the horror pie and is now licking the tin.

Truth be told, it's not as bad as it could have been. But seeing as how its Bad potential was a bottomless pit of existential despair and its Good potential was - at maximum - a noncommittal shrug, this doesn't say much about Ouija. And by scraping its way to being halfway watchable, it ruins any potential camp value with its aggressive mediocrity. Oh well. Let's not pretend that modern teen horror was going to get any better than this. 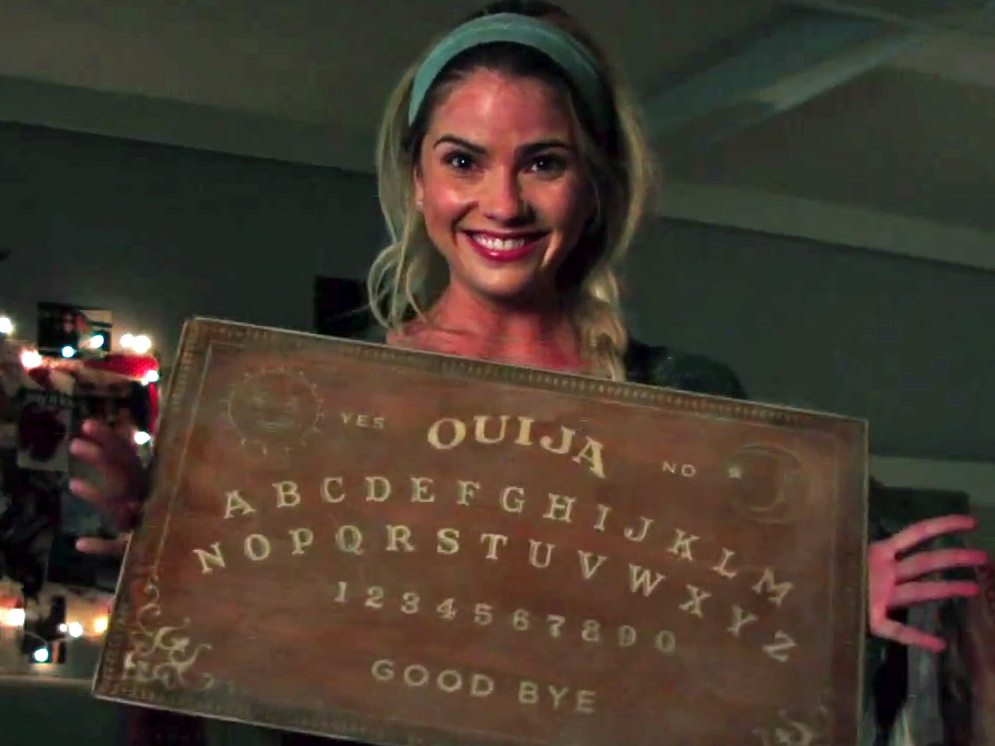 And nowadays we just communicate with the undead through Twitter, so this is sorely outdated.

Ouija's story is as old as the wise oak tree, but we'll run through it briefly anyway. Debbie (Shelly Hennig) and her friend Laine (The Quiet Ones' Olivia Cooke) used to play with the Ouija board when they were kids, but while their friendship has persevered, the tradition has not. But when Debbie is found hanging from her rafters on a string of Christmas lights like a macabre department store display, Laine suspects that a Ouija board in her room has something to do with it.

She gathers her smarmily hot friends to use the Ouija one last time in an attempt to contact her dead friend's spirit and find out what really happens. These friends include Pete (Douglas Smith of Stage Fright), Debbie's now ex-boyfriend; Trevor (Daren Kagasoff), Laine's unctuous beau who says totally rational things like "Don't worry about the noise. It's just an old house." and does totally normal human teen things like walk his bike through dark runoff tunnels after trying to contact the spirit of his dead friend; Isabelle (Bianca A. Santos), the requisite friend who doesn't want anything to do with this, you guys; and Sarah (Ana Coto), Laine's little punk rocker of a sister who she drags along in order to prevent her from hanging out with her much older (and presumably much hotter, though he unfortunately never appears onscreen) boyfriend. This character dynamic seems promising until it doesn't. 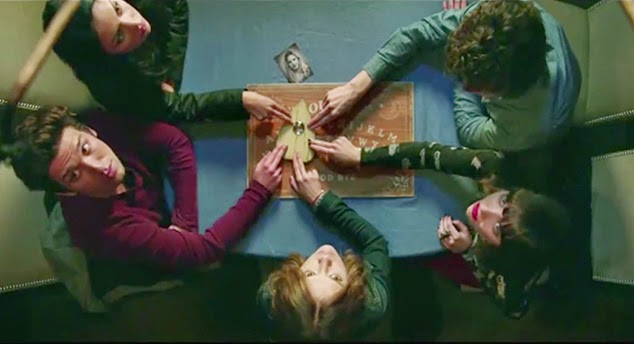 And let me tell you, spelling words one letter at a time just isn't as scary as they want it to be.

Obviously the spirit they end up contacting is something much less banal than Debbie's bland teenage ghost complaining about how bad the Wifi service is in the void. Rather, the entity they do come into contact with is the restless spirit of James Wan's The Conjuring, available now on DVD and Blu-Ray. With an evil old woman who opens her mouth wide and points at things and a supporting performance by Insidious' Lin Shaye, Ouija plumbs Wan and Whannell's playbook, mangling their favorite tropes for a healthy dose of paranormal insipidity.

This isn't necessarily a bad thing. Horror has always been recursive, bringing old elements into new stories to remix and refashion them. James Wan's films themselves are absolutely not free of borrowed elements. If cinematic influences were patches on a film's sleeve, The Conjuring would be that punk rock kid with the denim jacket that hated everyone in high school. But in Ouija its numerous borrowed tropes (including the morally dubious Magical Latina who teaches the teens about how not to screw around with spirits) are displayed with no aplomb, simply recycling what's easy and so shopworn it can't not be successful in some cases - at least in providing momentary, unexemplary thrills.

But the result of all this pilfering is that Ouija turns into a mixed bag of paranormal tropes and jump scares (a whole bunch of investigating strange noises and villains that you see too much of to be scary, with a little bit of found footage thrown in, cuz that's been popular lately), neither creating an effective atmosphere nor putting its own personal stamp on the genre. It's just the same old milquetoast genre fare that audiences are (hopefully) really starting to get tired of Hollywood spoon-feeding to them. 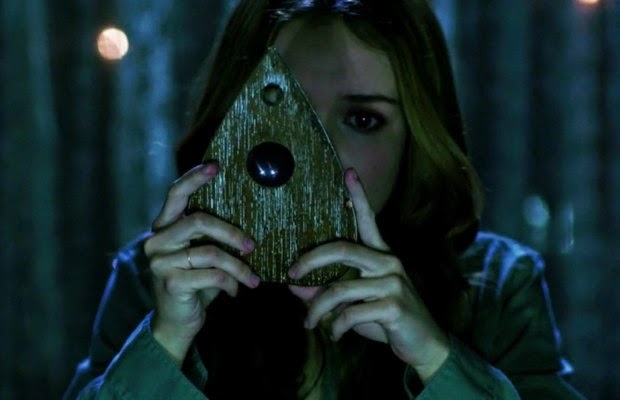 Wanna know another thing that's not scary? The word "planchette."

Everything in the film is half-hearted from the PG-13 gore on down. Once we reach the level of character, forget about it. Emotional beats are skated over at Olympic aptitude levels. Everyone is super sad Debbie died because that's in the exposition, but once Isabelle kicks it, her friends are all "Isabelle who?" And when Pete is inexplicably stricken with a case of floss-mouth - watch the trailer, it's nonsense - he's spirited away from the film with a single cryptic text message (the film makes an argument for the increased integration of modern technology in cinema but not enough to give it more than a passing nod, let alone a paragraph).

I can think of worse ways to spend 90 minutes than watching attractive characters make bad decisions for 90 minutes, but Ouija is so entirely toothless. It attempts to hide its deficiencies behind a couple decent shock scares, but there's no reason to seek out this film unless you are stricken - like Yours Truly - with Genre Completist Syndrome.

TL;DR: Ouija is nothing more nothing less than average teen popcorn horror.
Rating: 5/10
Should I Spend Money On This? No, especially not while the delightfully macabre The Book of Life is still in theaters. Or check out Daniel Radcliffe in Horns, out today!
Word Count: 977
Reviews In This Series
Ouija (White, 2014)
Ouija: Origin of Evil (Flanagan, 2016)
Also sprach Brennan at 3:09 PM