Hello everybody! It's that time of year again! The cogs of the Starbucks brand grind merrily along, lubricated by the tears of students preparing to face their midterms. As a film student I rarely get tested so for me, that means a rapid-fire barrage of projects and essays, which are arguably more challenging. I, for one, had fun, and would like to present you with my most recent essay on one of television's most unforgettable families - The Munsters!


Analyze one television show from the early or classical network periods of television in order to illustrate how the show reflects the social, cultural, industrial, and historical moment of its production. 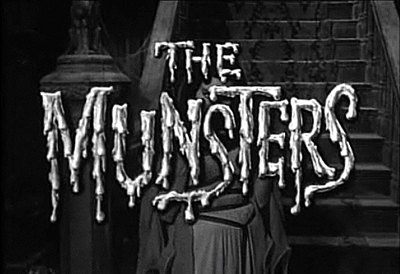 Since the very beginnings of broadcasting, the sitcom has been ever-present. Because of the familial nature of the genre, sitcoms have always been an avenue for female stars, of which there was a massive flux in the years leading up to the development to television as we know it. These women would play the matriarchs of “typical” suburban middle class white families, nurturing and kind, sometimes ambitious but always merrily sustaining her place - in the home, raising her kids and supporting her husband while he brings home the bacon. According to author Lynn Spigel, this depiction of home life in 1950’s sitcoms represented a “consensus ideology, promising practical benefits like security and stability to people who had witnessed the shocks and social dislocations of the previous two decades (Make Room for TV 2).”

However, due to the country’s economic turmoil (requiring women to take jobs outside the home) and large immigrant population (many American families were non-white and working class, especially in the cities), the media’s reflection of the “average” American family was largely fanciful. Although the standards and practices of television in the 1960’s were still largely conservative, by the middle of the decade, the television climate began to change. First came the hillbilly hurricane, a glut of shows depicting clashes between urban and rural families), which was soon followed by the advent of  “fantastic sitcoms,” which used “magical, alien, prehistoric, or ghoulish spin[s] on the American family” to combat and lightly satirize this idealistic perspective (Hilmes 222).

Perhaps the most incisive of these early satires (including Bewitched, I Dream of Jeannie, and The Addams Family) is The Munsters, in which the titular family is comprised of variations on classic Universal monsters. Taking great influence from gothic horror, Herman the patriarch is a Frankensteinian creation, and his wife Lily, son Eddie, and father-in-law are vampires. Only Marilyn, their blonde and beautiful adopted niece, looks anything like the typical member of a sitcom family. 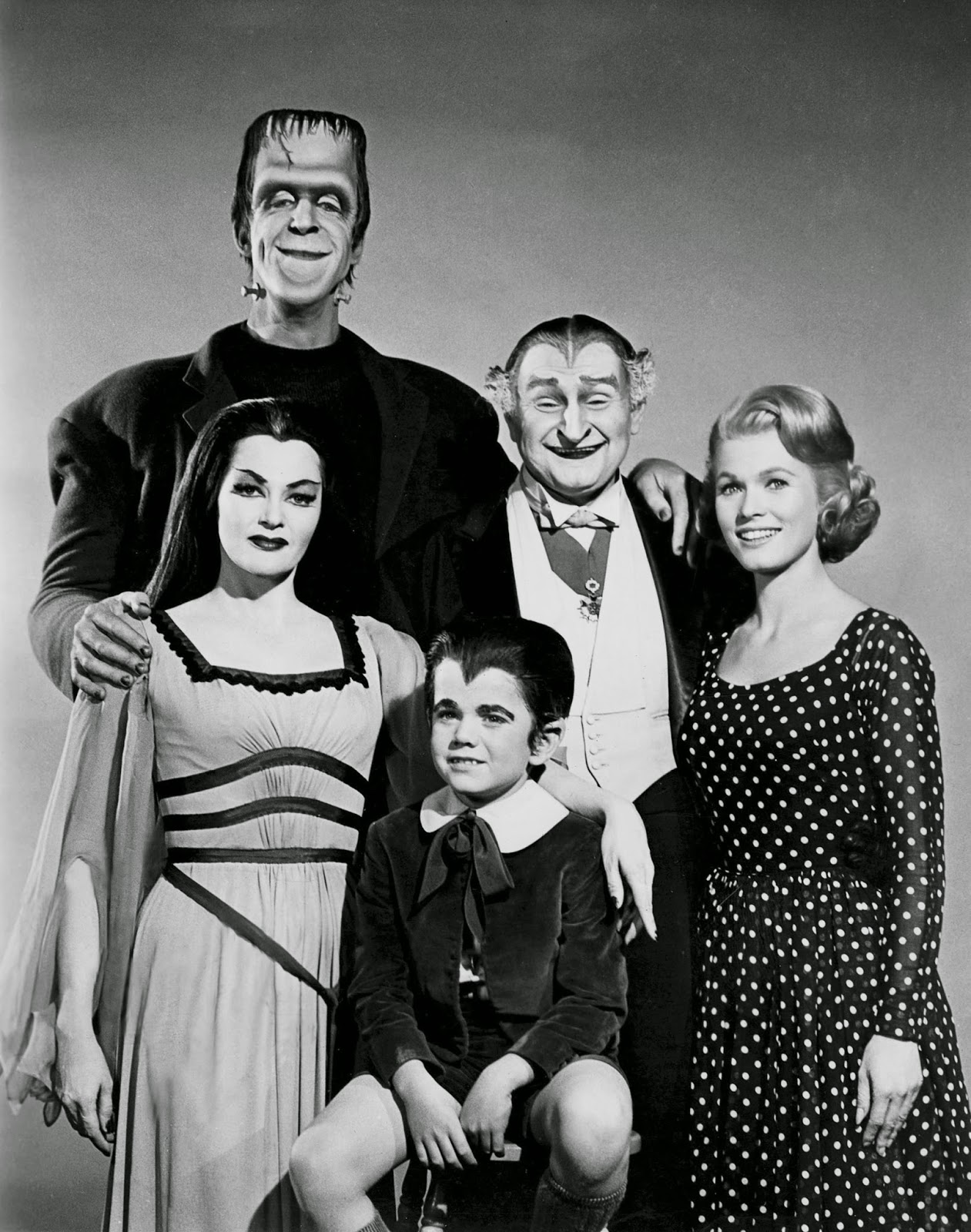 The break from reality that provides the central concept of The Munsters allows the show to poke fun at many cultural and suburban conventions indirectly without igniting fervor in the censors (Spigel, “Fantastic Family” 205-235), the most prominent of these undertones being the unsavory race relations of modern suburbia. Many of the issues the Munsters face in their day-to-day lives stem from the refusal of their neighbors (and society at large) to accept the differences in their customs, attitudes, and especially appearances, a struggle many non-white families faced during the tail end of the Civil Rights movement.

In fact, in an early episode – “My Fair Munster” – a neighbor remarks that “this was such a nice neighborhood until they moved in,” quite obviously drawing a parallel between the Munsters and racial minorities. The Munsters stand in for the unknown Other, merely trying to live their lives while constantly being on the receiving end of societal attacks. These offensives can be subtle, like Marilyn’s boyfriend’s elegant parents rejecting her when they meet her “weirdo” family in “Munster Masquerade.” In spite of her all-American demeanor, these bourgeois sophisticates can’t look past the surface level shocks provided by her monstrous-looking, yet well-meaning and polite family.

And it doesn’t end there. Some of the challenges the Munsters face can be quite harsh, including Herman almost being attacked and arrested for “terrorizing” a park during his nightly strolls in “A Walk on the Mild Side” and narrowly avoiding being murdered by fraudulent film producers hoping to collect his insurance policy in “Movie Star Munster.” Though the plots are fanciful and unrealistic, the Munsters and minority families are united by the universal scorn they unwittingly receive, as well as the instant fear and suspicion incited in society merely by the color of their skin. Whether it be brown or black or green, American suburbia yearns to scrub out any color that isn’t pure, glittering, “traditional” white.

An additional satirical dimension directly related to this societal attitude is that of class. Typically, suburban and especially urban minorities were viewed by the middle and upper class white families as a sort of lower caste - the working class, uncultured poor. Many immigrant families were penniless thanks to an unforgiving system, but even those minorities that could afford to move into the suburbs and live the “ideal” life were automatically downgraded in esteem thanks to the color of their skin.

The Munsters responds to this societal discord with fervor, depicting nearly every single authority figure in the town as either a bumbling buffoon or a conservative bigot. From the inept and crude gas company man in “Pike’s Pique” to the clownish doctors in “Rock a Bye Munster” and “Low-Cal Munster,” those who typically perform “superior” duties are viciously skewered by the show’s piercing satire. 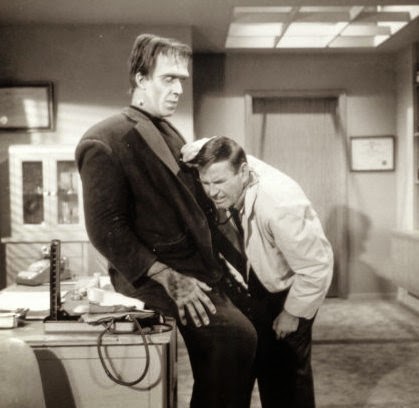 On the other hand, the other minorities which society at large also looked down upon tended to sympathize with the plight of the Munsters. Whether it be a group of hippies inviting the Munsters to sing along with them in “Far Out Munster,” a gypsy man overlooking Lily’s appearance to hire her for a job reading palms in “Herman’s Rival,” or teenagers welcoming Herman’s strange look and offbeat musical style, putting him on the top of the charts in “Will Success Spoil Herman Munster?,” the family always finds friends in societally “low” places.

Because The Munsters utilizes the Other family as its focal point and puts society on the outside, it exposes the animosity and stupidity of white culture at the time, painting them as the “bad guys” in a way that a more straightforward race relations television show could not possibly have portrayed with impunity (Hunzer 4).

In fact, this normalization of the Other is perhaps the single most important cultural impact of The Munsters and its fantastic sitcom counterparts. Although the Munsters may look strange, have bizarre customs (Lucy and Ricky weren’t exactly sleeping in coffins), and eat strange foods (lizard casserole and vulture egg omelets are some of Lily’s beloved recipes), they’re no different from any sitcom family.

They have a kind and loving mother, a bumbling father who worries about paying the bills, two kids, and a dog. In fact, in the episode “Family Portrait,” computer demographic analysis places them on a magazine cover as the “American Average Family of the Year.” They never seek to cause trouble, merely to live out their idyllic lives in peace and happiness. The trouble they do face is always brought to them from outside, from those who can’t see past their fear of the surface level repellence of the Other to understand the warmth and kindness inside the Munsters. 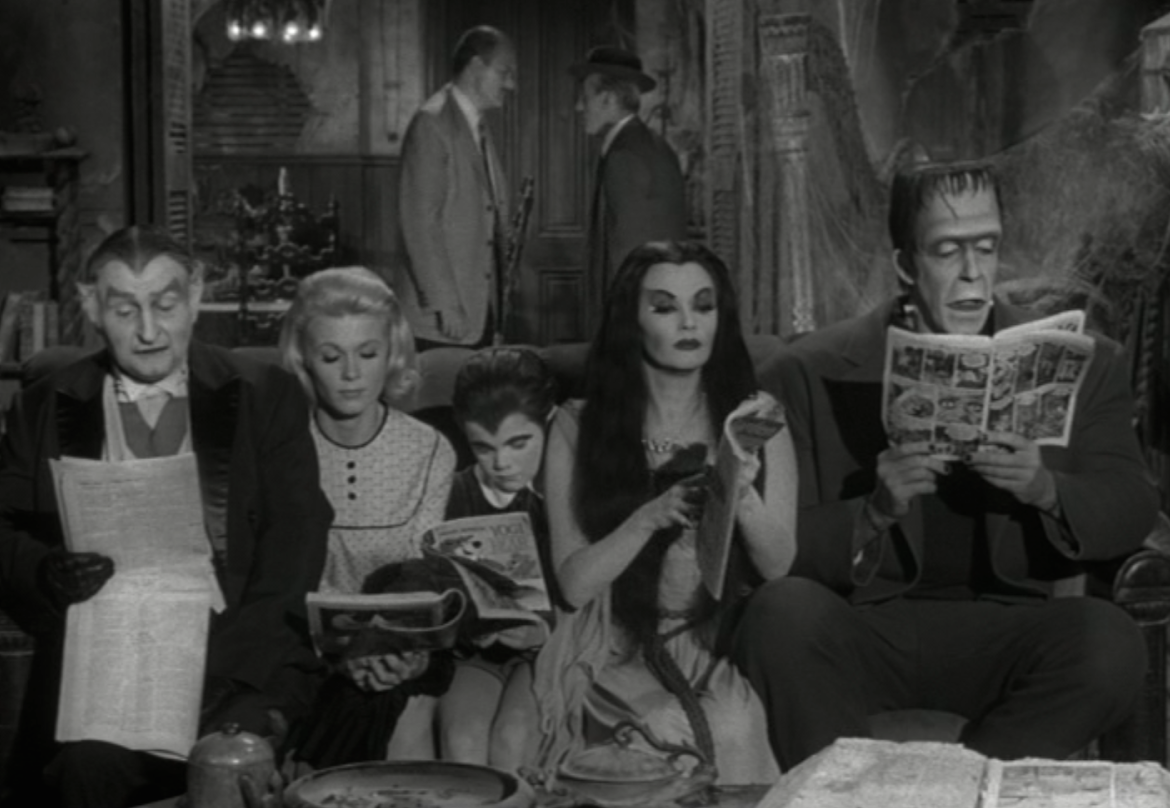 Audiences immediately understand how wonderful the Munsters truly are because the stories are told from their perspective. The subtleties of the discussion of race mechanics and bigotry in modern America that pulses beneath the show are recognized almost subliminally through the vantage point of this hilarious bunch. Again, this satirical intent could never have been accomplished through directly portraying a minority family. Thanks to the inherent racism of suburban, middle-class viewing audiences, ratings would have plummeted, rendering the show an abject failure.

But by allowing the viewers an access point through the wildly popular and well-understood medium of classic monsters, The Munsters brought its social commentary to the mainstream, becoming a massive success. In fact, the show was the 18th highest rated television program in the 1964-1965 season, alongside such similarly satirical programming as The Beverly Hillbillies, Bewitched, The Andy Griffith Show, and Petticoat Junction.

Together with these types of programs, The Munsters began to pave the way for a new style of media and a new way of telling stories. Television as we know it couldn’t have been possible without the contributions of this show and many others during the massive tide change of the 1960’s as minority classes struggled to break into a culture primed to ignore and even despise them. Although American media and culture still has a long way to go to be truly accepting and diverse, without the brave and subtle efforts of the showrunners during the transitory period of the 1960’s, we as a nation may very well have been set back several years, maybe even decades.

The prominence of the television sitcom allowed positive messages to be spread to the American populace through subtle, almost counter-intuitive channels, utilizing a format that promoted conservative values and middle class consumerism to further the efforts of hundreds of varied communities struggling to earn a name for themselves. The Munsters and the fantastic sitcoms of this period are often overlooked in modern academia, but their massive influence speaks volumes by itself. The gentle satire of shows like The Munsters paved the way for much more proactive movements, all through the simplicity of the most traditional unit of all – the American family.