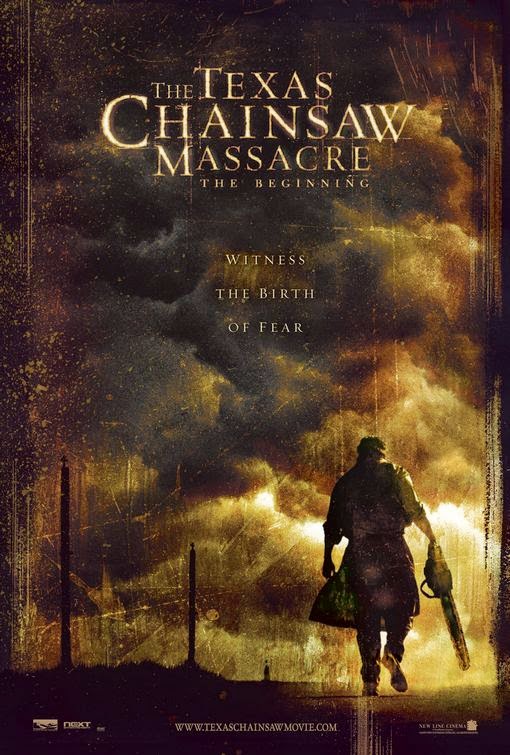 It's nearly unprecedented in this day and age for a remake to have a legitimate followup. The only even tangentially related films of the past ten years that come to mind are I Spit On Your Grave 2, Quarantine 2: Terminal, and Fright Night 2, all largely tangential direct-to-DVD sequels, as well as the planned 2015 Friday the 13th re-reboot, which I guess wouldn't even count. Only those sequels stand among the dozens of horror remakes that have been inflicted upon the world since the genre's Renaissance, kickstarted by 2003's The Texas Chainsaw Massacre.

It is a testament to how groundbreaking that film was that it received any sort of franchise connection at all, let alone a prequel with most of the same cast signed on to reprise their villainous roles. And thanks to the short hiatus between the two movies, the presence of Platinum Dunes at the helm, and the wild success of the remake, The Texas Chainsaw Massacre: The Beginning is actually the one film in the entire franchise to have more or less airtight continuity.

It's far from a masterpiece, but the fact that it doesn't require any mental acrobatics to clumsily shove Leatherface's daughter or Matthew McConaughey's Illuminati cyborg leg into the potential trajectory of a previous entry allows The Beginning to go down smooth as silk. 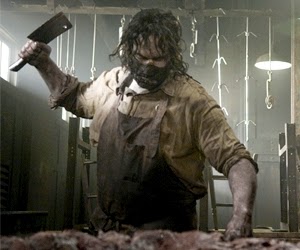 Or rough as steel wool, but we're talking about continuity, not content.

Set several years before the events of the remake (which was inexplicably set in the same year as the original), The Beginning takes place in 1969 during the height of the Vietnam war. Two sexy brothers, Dean (Taylor Handley of the under-appreciated gender-bending sci-fi-rom-com Zerophilia) and Eric (Matt Bomer, this film's requisite future celebrity), are taking a final road trip from LA to Florida before they ship out. Only thing is, Dean has no intention of following through, instead opting to dodge his way down to Mexico with his beautiful sexy girlfriend Bailey (Diora Baird).

After a car crash and a run-in with a man (R. Lee Ermey) impersonating the recently deceased Sheriff Hoyt (he passed away quietly in the road after a brief gunshot wound to the head), the kiddos are dragged away to a secluded home by the closed-down slaughterhouse. Left behind is Eric's girlfriend Chrissie (Jordana Brewster), who was thrown from the vehicle and hid in the bushes during the ordeal. Now she must find a way to save her friends from Hoyt, his cannibalistic family, and their enormous be-masked son who will soon find himself a relaxing hobby that leads to his new name - Leatherface (Andrew Bryniarski). 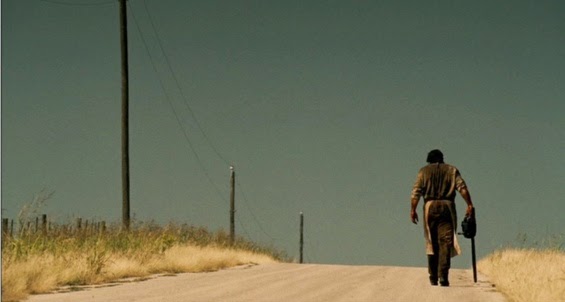 "Dusty Chainsaw Man" just doesn't quite have the same ring to it.

The best I can say about The Texas Chainsaw Massacre: The Beginning is that is is remarkably distinct from its predecessor - in equally good and bad measures. That which it improves upon is very much to my tastes, but its failures as a piece of cinema are certainly more numerous. But to start off, let's kick it into context with perhaps the single most important horror film of the 2000's - Saw.

The gore of the remake certainly made a strong statement, but in the post-Saw world the new slogan was "more is more." So The Beginning trotted out the big guns - a sexier cast (a feat I would have deemed impossible before seeing this film, but lo and behold - Platinum Dunes must have some kind of Stepford Wives jig going on), more grimy gore effects (including a disgusting birth sequence on the floor of a meat packing plant), more chainsaws, and - a first for the franchise as long as we're pretending TCM III doesn't exist - a heaping helping of traps and twisted games. 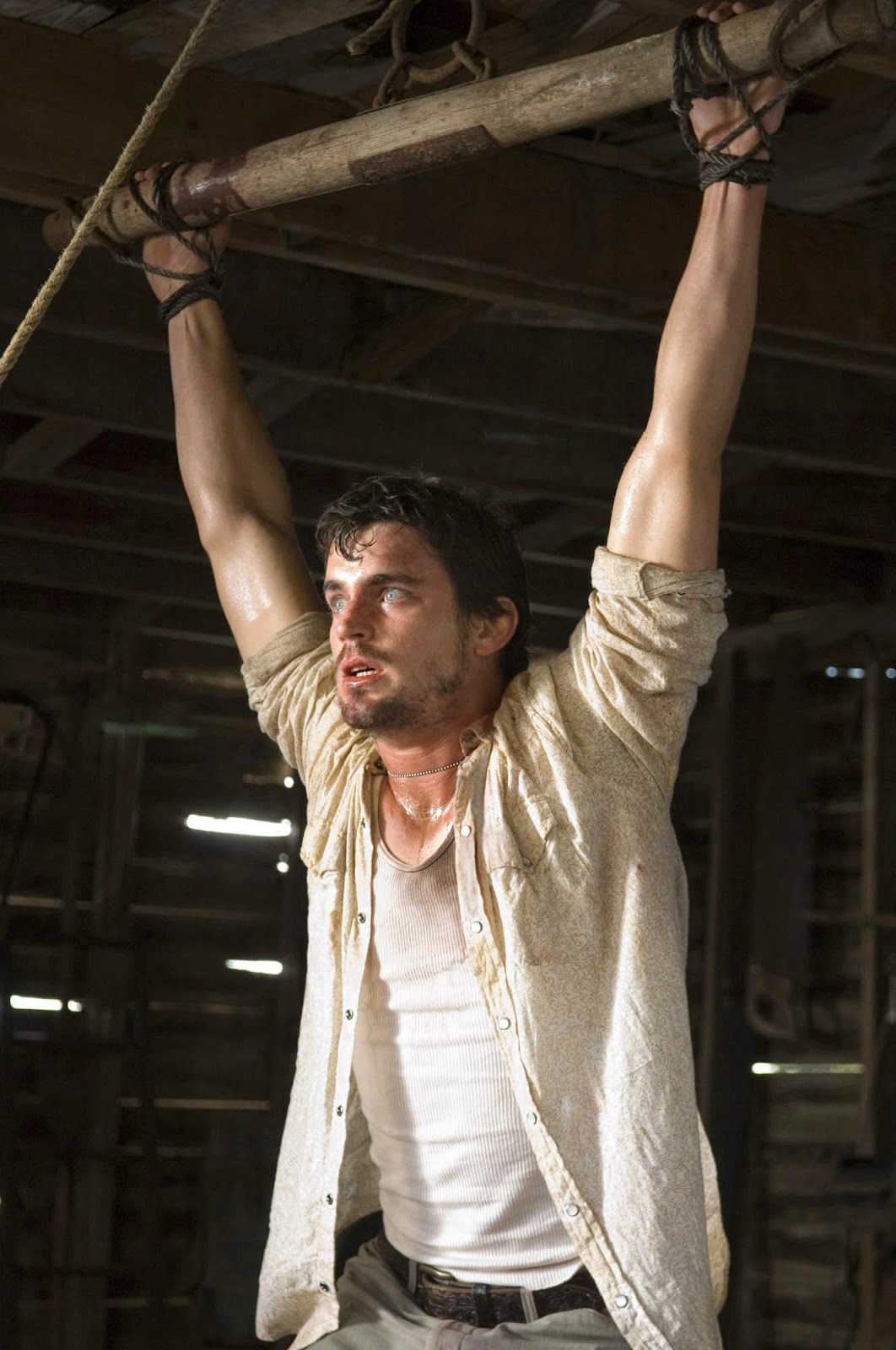 Overall, it's much more grim and bleak, perhaps the most depressing entry in the franchise since the original, though it by no means has that film's raw power. But it comes into its own with some utterly strange moments of humor that I would be loathe to spoil here, should anyone actually be interested in watching it (and, no matter how inept some of them might be, a Texas Chainsaw movie is generally always worth a watch for the morbidly curious bad cinema connoisseur.)

Along with it's newfound post-Saw energy, The Beginning separates itself from the remake with a grubbier aesthetic, more closely matching the original's grainy, yellowed, and decrepit visual style, removing the slickness that covered that film in a too-glossy sheen. And the film is far more political, covering topics as far and wide as draft dodging in the Vietnam era, the dangers of blind patriotism, the economic decline of the early 70's, and the burgeoning biker and hippie movements as well as their tensions with the older generations.

It misses more than it hits, but The Beginning has its heart in the right place, spilling over the brim with thematic fervor. And the exploitation meter finally hits both genders equally as we get firsthand knowledge of just how hot Matt Bomer can be in any given situation. 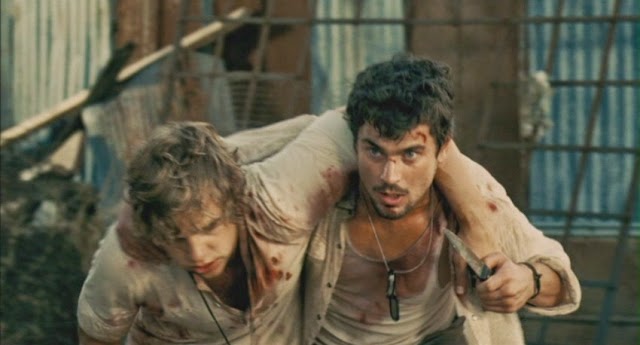 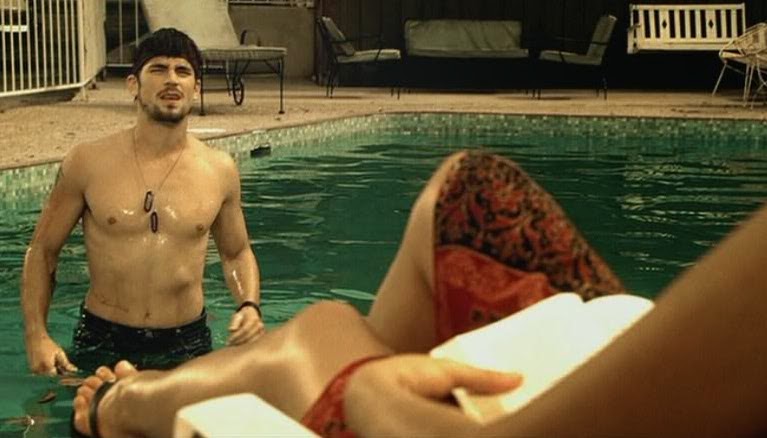 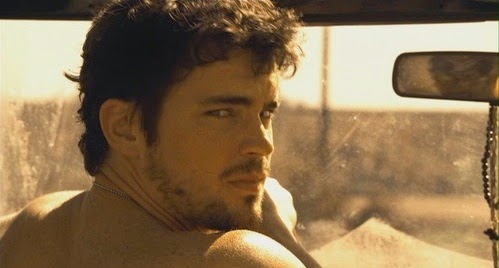 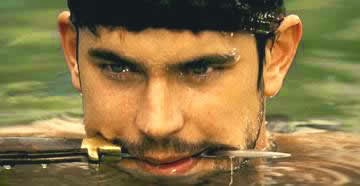 This is literally his first shot in the movie. 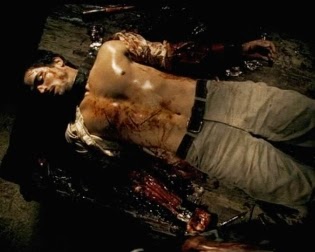 The perfect image to represent this film's incessant amorality and gleeful exploitation. But tell me - wouldn't you put on Matt Bomer's face if you got the chance?

So this is all fine and good, but the unfortunate fact remains that The Texas Chainsaw Massacre: The Beginning is a just plain average mid-2000's horror picture. Call the Texas Chainsaw movies anything you want (and I absolutely have), but they have never been average.

This film is saddled with a truly unfortunate plague of shaky cam that makes the whole thing feel like it was filmed in an earthquake, and just about every major character decision is the single dumbest possible outcome. I mean, for crying out loud, Dean burns his draft card in the car while he sits two feet behind his soldier brother and doesn't think that he'll notice. Next time you want to be discrete, maybe don't light a flame behind somebody's head in a moving vehicle.

And the cannibal family is utterly lackluster in this go-around. I've never been a big fan of Bryniarski's Leatherface, but he at least gets the job done. And R. Lee Ermey still pulls out all the stops as Sheriff Hoyt, but the weight of the entire film rests on his shoulders as the man who tries to convince his family to turn to cannibalism. He himself seems to have little to no motivation other than that he's just a big old psychopath. Yay prequels!

The fact that he is doing this against their will completely undermines the terror of the piece. Sure, a man trying to get his family to eat people would make a good feature on its own with more time to explore the psychology, but here it's hardly a subplot. If the family is resisting their urge to be evil, it's just not scary. I mean, I know it's supposed to be a prequel and all, but all this moral waffling gets in the way and even actively impedes what is a decidedly grotesque film.

The Texas Chainsaw Massacre: The Beginning is noncommittal, and that's the worst sin a movie this grubby and exploitative could have committed. But it's still a competent film with some major improvements on the remake. Though its overall net worth ends up somewhat lower than its forefather, The Beginning is yet another in a surprising run of decent Platinum Dunes remakes and you won't catch me complaining about that.