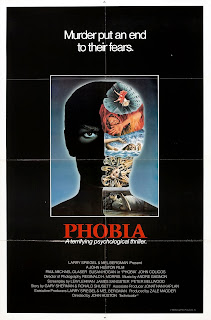 Yes, that John Huston. Director of The Maltese Falcon. Progenitor of this magnificent bird creature. 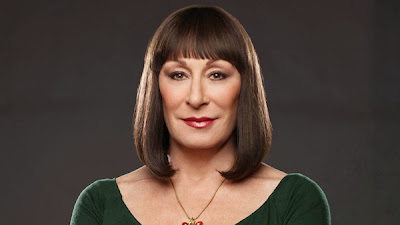 Rumor has it that when the Earth finally crumbles into dust, all that will remain is a puff of feathers and a receding shadow as a lonely hawk flies away, searching for a new world on which she can reign supreme for the next millennium.

Who knew that trudging through the sodden mush that is the slasher genre would yield such unexpected treasures? First we get Klaus Kinski in Schizoid and now Mr. Huston himself. What could possibly be next?

For the second film in a row we get a slasher that aims much higher. Again based on a therapy group, Phobia focuses on Dr. Peter Ross (Paul Michael Glaser - That's right, Starsky is in a slasher movie) and his five patients. He's experimenting with a new phobia treatment (namely, exposing patients to what they're afraid of in the hopes that they will... stop, I guess.) and all five of them are ex-inmates who have agreed to participate in exchange for parole.

The patients are Henry (David Bolt of Prom Night), who has acrophobia - fear of heights; Barbara (Alexandra Stewart), a sweet young woman with agoraphobia - fear of crowds and open spaces; Johnny (David Eisner, who would later play a minor character in Happy Birthday to Me), and it's never really clarified but we can assume he has claustrophobia; Bubba (Robert O'Ree), who has ophidiophobia - fear of snakes; and Laura (Lisa Langlois, also of Happy Birthday to Me), who as far as I can tell is afraid of being raped. Rapeophobia? Since when is that a bad thing?

One by one the patients begin to die according to their phobias and if that sounds pretty interesting, I regret to inform you that it's not very well executed. In fact, until about three deaths in it's not even clear that there's a killer at all and most of them seem to be incidental unless the killer had a Joker-sized level of premeditation.

Also on hand are his ex-girlfriend Alice (Patricia Collins) and his new girlfriend Jenny (Susan Hogan) and there's some tension between them but not enough to spark any sort of functional subplot. 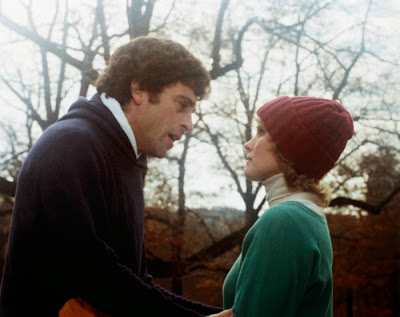 I'm trying! Can't you see that I'm trying to be a better plot device?

There's a lot of business where the police try to figure out who's perpetrating the killings and Inspector Barnes (John Colicos) is a huge dick to everybody he meets. When he suspects one of the members of the therapy group he straight up Jack Bauers him in an interrogation room, shoving him to the ground every chance he gets with childish glee like a playground bully. It's not necessarily obvious who the killer is but it's also definitely not the grand glorious Twist they were playing it off to be, which renders the investigation scenes even more unnecessary and a even little hateful.

The movie has scattered moments of real tension (especially in the scenes that have to do with one patient's specific phobia) but for the most part it is a toothless American cousin to the Italian giallo films. For some reason (Artistry, I guess. Ugh.), the filmmakers decided to keep the crime procedural aspect of the genre and ignore the hyperactive fantasy gore sequences.

All smoky glowing lights and twisting staircases and sinuous shadows, this flick would win best art direction of Census Bloodbath 1980 (so far) in a heartbeat, but it doesn't have a lot going for it beyond that. It's diverting for an hour and a half but I honestly can't think of a single situation where I would ever be compelled to watch it again.

I really can't wait until slasher movies start to get their act together and figure out the big man + sharp things = good times equation. I know it's tacky to fervently wish any of these films would adhere to formula, but it's gotta be established before it can be reasonably broken by the likes of A Nightmare on Elm Street or April Fool's Day.

And I'd much rather watch Kevin Bacon's arrow-through-the-neck scene from Friday the 13th for an hour and a half than this rickety and lackluster affair. 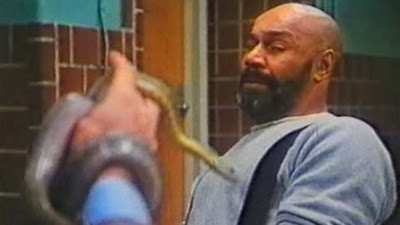 The snake scenes were cool though.

But it is what it is and I committed myself to sitting through the whole thing so I could be the most knowledgeable slasher scholar on the planet and by George I'm gonna share it with you so you don't have to do the same.

And despite not quite being a legitimate slasher itself, one of my favorite slasher elements can be seen sprouting tiny little roots. Themed killings never really became mainstream but gosh I do love it when the death scenes are tailor-made for each character. Happy Birthday to Me is full of these, with the kills reflecting the central characteristic of each victim (the biker gets his face shredded with a tire, the jock is squashed by dumbbells and so on). This kind of thing shows that more thought went into making the film than just "What part of this dude should the killer put his machete into?"

So all in all, Phobia wasn't a massive waste of time. I'm not about to bust out the ticker tape for that though.

Killer: Dr. Peter Ross (Paul Michael Glaser)
Final Girl: Jenny St. Clair (Susan Hogan), although she's not a Final Girl in the traditional sense.
Best Kill: I'm a big fan of the file cabinet that explodes.
Sign of the Times: Dr. Ross has a Converse poster in his office. 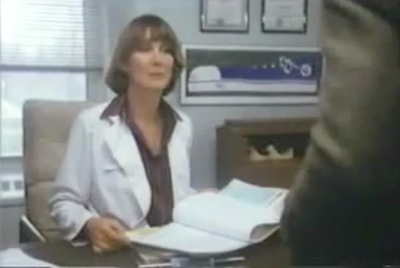 Scariest Moment: Barbara has a meltdown on a subway.
Weirdest Moment: There's a downright hilarious amount of scenes of Dr. Ross playing hockey.
Champion Dialogue: "Damn! I've got to get to the car phone!"
Body Count: 6; including the killer
TL;DR: Phobia is admittedly suspenseful but it's easy to see why it got lost in time.
Rating: 5/10
Word Count: 1138
Also sprach Brennan at 12:28 PM