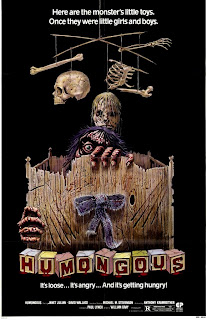 Well, happy belated Labor Day. But Henri and I watched this movie on the holiday Monday, I swear. This is authentic.

Seeing as I'm always keen on topical slashers movies, Humongous was the perfect film for this holiday because not only does it take place on Labor Day Weekend but it's a Canadian production, which gives me great pleasure for two reasons. One, Canadian slasher movies generally tend to be of a higher quality than American ones. Two, Canada doesn't have a labor day. In another desperate bid to fit in with their American brethren, this film takes place on a holiday that, to them, doesn't even exist. Basically, Humongous is a fantasy on the level of Lord of the Rings in Canada.

The fact that the entire cast speaks like they're two loonies away from becoming a Mountie is a source of unending joy.

The film opens with its most unpleasant scene (which, after extensive film major training, I have learned is a bad thing) in 1946 at a Labor Day Party on a remote island in the center of a large lake. A woman is raped by a partygoer, who is summarily eaten alive by her guard dogs (She may or may not have some sort of Dog Magic. This is unclear.).

Cut to 36 years (and one sitcom title card) later. 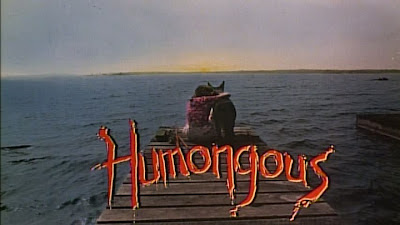 And of course she had the baby and of course it's hideously deformed and we also know it's a giant because it's in the title. A pat on the back for us on that one.

A group of teens who aren't as savvy as we set out on the lake to enjoy their three day weekend and they bring plenty of Meat. There's Eric (David Wallace), a handsome and sweet, if a little bland young man; his girlfriend, model Sandy Ralston (Janet Julian); his brother Nick (John Wildman), a toking pranking douche of epic proportions; and his girlfriend Donna (Joy Boushel), who provides the bulk of the nudity. Tagging along with them is Carla (Janit Baldwin), Eric and Nick's younger sister, and what a shrill, annoying, slut-shaming piece of work she is. With her thick glasses and virginal ways, you just know she's gonna be the Final Girl. Oh also there's this dude Bert (Lane Coleman) who they found adrift in a rowboat. 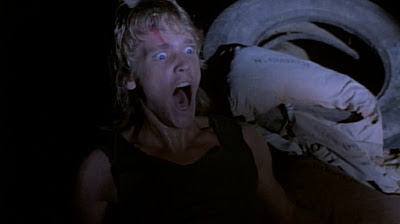 So here we have our castaways washed up on the beach and ripe for the picking. The interpersonal drama that ensues isn't quite captivating and the acting is uniquely terrible (Wildman in particular sounds like he tried to mark down which syllables to emphasize but spilled coffee on his notes), but it's charming in an 80's nostalgia kind of way.

The monster doesn't waste much time, nabbing Nick as he hides in a boathouse. We hear him scream, but he dies offscreen. Then he heads down to the sand and flings a Bert-straddling Donna to the ground. Cutaway.

And then I cry. You see, Humongous is utterly stingy with its gore sequences, which would have elevated a pretty OK movie into the stratosphere of 1982 slashers. Unfortunately, it is positively toothless and as such loses a lot of fuel. It sputters and starts for its middle third, puking up botched jump scares and tedious sequences where we learn that yes, there's a monster and yes, he wants to eat them.

Luckily, Humongous seems to become aware of what a low-fi crock of BS it is and picks up the pace for the Final Girl sequence. After an "I'm Your Mother" bit lifted directly out of Friday the 13th Part 2 (Somebody plagiarizing a Jason movie? Something is dangerously wrong here. It's supposed to be the other way around!), Sandy escapes the monster's lair and meets up with Carla at the boat house. Much to my delight, Carla gets her face crushed.

She wasn't too cut up about it.

What follows is a fairly routine final scene. Hiding in the Boat House, The Killer Isn't Dead, Oh Wait Yes He Is. But the one thing Humongous has going for it, and it's a fairly big one, is that Final Girl bait and switch. Allowing Sandy the luxury of survival is an unprecedented move. She's a model who shows ample cleavage (Well, she does what she can. We can't all be spectacularly endowed.) and we even see part of her butt in an early scene.

Allowing such a woman to live and killing off the virginal square is a huge step forward for the genre. It's perhaps a little too bad that it's this movie that makes such a remarkable leap, but this is what we get and Humongous is a better film because of it.

And though it may seem like I'm complaining a lot (And I am. To be honest, the movie wasn't very good at all.), this movie has a secret weapon. It's directed by Paul Lynch.

The hack auter behind Prom Night, Lynch movies are characterized by excessively dark night scenes (The final thirty minutes of the film are almost completely pitch black) and seedy low fi gore scenes that are few and far between, but somehow in spite of it all remaining absolutely lovable.

Filled with scenic ocean vistas and spurts of creative effort (the canted shots in particular show that at least he was trying), this film, much like Prom Night before it is hopelessly idiosyncratic and somehow more joyful than other slashers of its ilk. 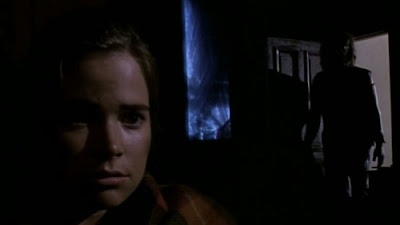 I think. It really is hard to tell what we're looking at. I may have been watching The Cosby Show the whole time.

Killer: Ida's Son (Garry Robbins)
Final Girl: Sandy Ralston (Janet Julian)
Best Kill: Eric is hugged to death by the monster.
Sign of the Times: Nick's outfit of choice is Daisy Dukes and nothing else.
Scariest Moment: The monster's eye is spotted through a keyhole.
Weirdest Moment: Donna collects blueberries in her cleavage.
Champion Dialogue: "You're not the only one who can do things!"
Body Count: 7; including the killer, but not the dog he stangles.
TL;DR: Humongous is overly dark (literally) and tame, but the presence of Paul Lynch makes it palatable.
Rating: 5/10
Word Count: 1145
Also sprach Brennan at 8:16 AM