As some of you may know, I'm currently enrolled in a class called "American Film Genres" that, by some sinister twist of fate, is focused on horror movies this semester. Hopefully this class will help me be able to enhance my blog by teaching me a lot more about the context in which classic films were made and ways to analyze horror's relevance to society.

Because it is relevant.

More than any other genre, horror reflects the tensions and mores of the society in which it was developed. Afraid of the implications of going nuclear? We got Godzilla. Afraid of the noblemen having too much power? We got the sinister Count Orlok in Nosferatu and the mad asylum director in Dr. Caligari.

Horror is catharsis that allows us to face our fears in a safe environment while at the same time receiving the thrills and chills that keep our adrenaline pumping (and our endorphine levels high). In this class, we're working chronologically through the development of the genre from German Expressionism in the 1920s all the way up to current Postmodernism.

I'll release a series of mini reviews as I go along, so you can catch up with the same horror classics I'm learning about in class! Here's what I've got for my first three weeks in this beautiful beautiful class.

The Cabinet of Dr. Caligari 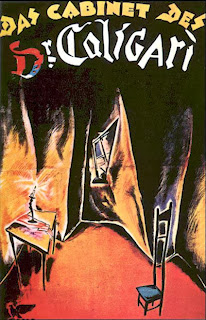 In the 1920s film was so new that you couldn't turn on a camera without doing at least three things for the first time. The Cabinet of Dr. Caligari. Widely regarded as one of the first horror films, it also featured one of the first cinematic twist endings. This was a studio mandated ending to avoid the "people in power are psychos" theme that I mentioned earlier, so this is probably one of the first examples of studio meddling too for that matter.

Perhaps the most notable feature of Dr. Caligari is the visuals. This film and the same year's Nosferatu ignited the period of German Expressionism in which the setting and costumes don't reflect reality, rather the emotions behind the characters. Caligari is filled to the brim with twisted, spiky scenery that instantly places the viewer in the mind of its less than sane protagonist.

The story really doesn't matter, it's all just in support of the lavish (and outrageously cheap - they were mostly painted backdrops) and surreal sets. So much so that the IMDb description of the plot can hardly  even be considered a sentence (and certainly not a coherent one).

At 67 minutes, the time doesn't exactly fly by but it mostly avoids the dangers of watching silent films in the modern era by being too short to be reasonably considered boring. Yes, it is slow, but that is more than made up for by its intense design and astoundingly creepy characters in Dr. Caligari and his somnambulist. It's hard to be scared by a film from this era, but there's a layer of chilliness that settles over the film that's quite unsettling.


The Bride of Frankenstein 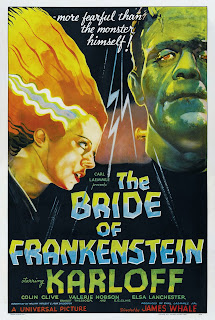 This one here is a load of firsts for me personally. I love all aspects of horror wholeheartedly, but frankly I've been very distracted by slasher movies and slacked on some of the classics (I've never seen Alien, eep!). That's one of the reasons I took this class. It's not "slasher class" so I'll have a more in depth knowledge of some of the genres I've been neglecting.

Anyway, this is both my first Boris Karloff movie and my first Universal monster movie! I know, I know. I deserve to be stoned to death in the parking lot of a Walmart for not having seen any of these.

Anyway, not that I have a frame of reference, but Bride of Frankenstein was an excellent place to begin. Yes, it's a sequel but I know enough about the original Frankenstein and the novel to piece together what happened. Baron Henry Frankenstein (Colin Clive - My first surprise. he's not named Victor. Who knew?) is alive but barely. He's being nursed back to health by his fiancée Elizabeth (Valerie Hobson) but ends up on the wrong end of Dr. Pretorious' (Ernest Thesiger) mad attempts to harness his discovery of manmade life.

Furthering the "man playing god" idea from the first film, this one extends even further, drawing heavily from the story of Adam and Eve.

The film draws heavy influence from German Expressionism and the sets are unbelievably evocative and gothic. My professor likes to say that sets are characters in the film and this one more than any other proves him right. From Frankenstein's sumptuous mansion to the baroque arches of the prison interiors, the sets draw more on a sense of old time majesty than realism.

The most stunning example of expressionism at work (perhaps in any film ever) is when Frankenstein's Monster is freed from his fiery tomb and left to wander the forest on his own. Birds are chirping, flowers are blooming, and the brook is babbling. Unfortunately happiness is always transient for the Monster and he is discovered by the villagers who chase him back through the same forest, now filled with dead trees, twisted and black.

Man oh man, what a great scene. This is why film historians should really pay more attention to the horror genre instead of treating it like a sideshow.

Not that the film is ever scary. It's a tragedy through and through, enhanced by Karloff's forlorn performance as the friendless Monster who tries so hard to be good, but nobody can see past his appearance. I think we all have felt like that at one time or another. Whenever he smiles, full of naïve hope and plaintive loneliness, I swear it will break your heart.

Bride of Frankenstein survives a sluggish first act to deliver a staggering tale of longing, heartbreak, and loss as told by a Monster.

I Walked With a Zombie 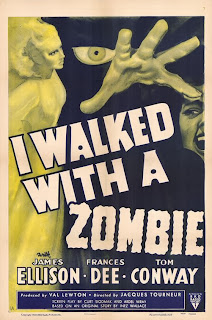 Let me set the record straight. This was 1943. The idea of "zombies" didn't exist yet. The flesh-eating, virus-having, shambling corpse variety wouldn't come into play until George Romero's Night of the Living Dead in 1968. Back then zombies referred only to undead voodoo slaves. Yeah, they're dead, but they won't hurt you. They just do whatever the voodoo priestess commands.

Does that sound pretty boring?

Betsy (Frances Dee), a nurse, comes to a lonely island in the West Indies to take care of Wesley Rand's (James Ellison) sickly wife (Edith Barrett). She's bedridden and comatose, only able to follow simple commands but not able to speak or interact with people. Can you guess what she is? Did you guess zombie? Congratulations! You did in 12 seconds what Betsy did in 45 minutes.

At a brief hour and ten, I thought the film would slip by, no matter how slow the plot was. I was wrong. Time passed like molasses to the point where I thought my watch was lying to me.

This film was produced by Val Lewton, one of the few successful horror filmmakers in the 40's, but it certainly does not feel like the best the decade has to offer.

I really don't have much else to say about this film, considering that I sat there slack-jawed for an hour struggling to stay alert and not slip across into the tantalizing realm of unconsciousness. I will say this though - I hate Betsy. She falls in love with Wesley with absolutely zero provocation despite having no chemistry and him being a huge douche to her the whole time.

She fell in love because she was in his proximity and this was the 40's.

Betsy is the worst.