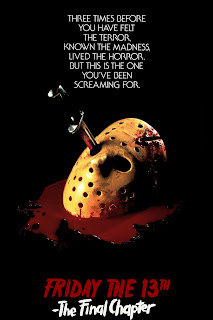 Here we are at the end. The MPAA had just about had enough of Jason and his exploits and the parental dissent turned from a grumbling to a roar. Theaters began to close their doors to slasher films and the great splatter tentpole of the decade, Friday the 13th, made the announcement that this next film would be their last.

Of course we all know that's a crock of sh!t now, but it was a big deal, I'm telling you.

In a grand explosion of effort, the forces of slasherdom pulled together to produce the quintessential Crystal Lake film to say goodbye to the now beloved hockey masked antihero. Tom Savini returned, reportedly so he could kill his the monster of his creation. He hated the sequels and wanted to be there personally to oversee the death of Jason. Regardless, the presence of Savini and the filmmakers' desperate awareness that this was going to be their last chance to make a splash in the horror genre combined to form the most exploitative, goriest, and most fun entry yet.

Again, this obviously wasn't the end, but nobody knew this wouldn't the final film of the series. And in a way, it kind of is. After this, the sequels become considerably less airtight in regards to continuity (which is shocking for such a continuity anorexic franchise) and many consider the first four films to be the "real" essence of Friday the 13th.

So. The fourth and last of the core Friday films. Here we are at the end. 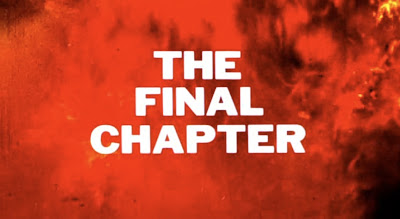 As represented by the 80's, in which it wasn't considered a movie if something didn't explode.

The film opens with a much more competent recap than the stock footage unceremoniously thrust into the beginnings of the previous two entries. With clips from the previous three films set to Paul's campfire story from Part 2, this sort of "previously on Friday the 13th" segment is a relative masterpiece of coherence simply by not being immensely tedious (Especially at a marathon where you're forced to watch the films back to back).

Slimy autopsy technician Axel (Bruce Mahler) flirts with sexy Nurse Rose (Lisa Freeman) and thus begins a verbal ballet of epic proportions transcribed in dutiful detail in the Champion Dialogue section. Despite her initial objections, Nurse Rose hops on Axel the first chance she gets - when he's watching a steamy aerobics video next to the covered corpse of one Mr. Voorhees.

The combination of inexplicably porny workout videos and the imminent threat of premarital sex prove too much for the poor corpse and Jason leaps back to life, performing a brief showcase of Tom Savini's work as he hacks Axel's neck with a surgical saw and twists his head around before stabbing Nurse Rose with a scalpel. 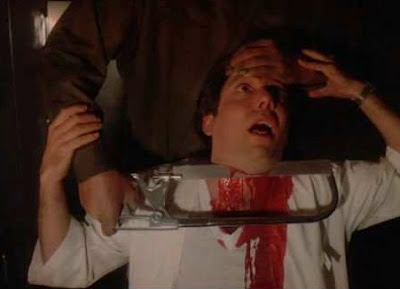 That Jason. What a pain in the neck!

With those two out of the way, he makes his merry way back home to the shores of Camp Crystal Lake which by this point is more like a sea considering the amount of property that lies upon it. This time we arrive at the Jarvis household, a secluded woodland hideaway inhabited by Mrs. Jarvis (Joan Freeman), a doting mother; her teenage daughter Trish (Kimberly Beck); and her young son Tommy (Corey Feldman), who is an expert maskmaker, a skilled handyman, and also is Corey Feldman. 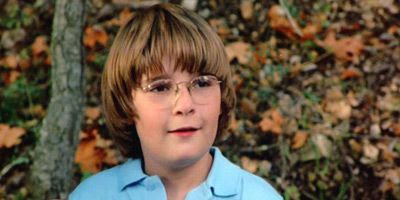 Obviously that's not enough people for Jason's fourth and final outing, but there's a huge tray of Meat being delivered to the house next door. Although the film doesn't bother to name them until about half an hour in, I (being extraordinarily committed to y'all) have compiled them here.

There's Paul (Alan Hayes) and Sam (Judie Aronson), the requisite couple who seem even less necessary than usual because they're one of the few pairs of teens who don't actually bone (this film is notorious for containing the most nudity in a film franchise notorious for gratuitous nudity); Sara (Barbara Howard), Sam's best friend and Grade A virgin who'd be a shoo-in for Final Girl if it weren't for those pesky Jarvises; Doug (Peter Barton, who got to play opposite Linda Blair in the future Census Bloodbath entry Hell Night), the object of Sara's affections who has no objections to being such; Ted (Lawrence Monoson), the prankster and they couldn't even try to hide the fact that he's transparently named after the prankster from Part 2 (Whose name is stolen from Ned in the original. It's all very incestuous.); and Jimmy (Crispin Glover, proving that it's impossible for this movie to get any more 80's), the lovable and lonely (read: horny) nerd.

So that's 3 Jarvises, 6 randy teens, and to top things off we get two sexy twins (Camilla and Carey More) and Rob Dyer (Erich Anderson), the brother of Sandra from Part 2 (about whom I remember nothing) who's on a Jason hunt in the woods. 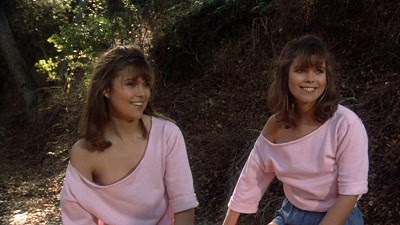 Basically the teens get freaky, go skinny dipping (legs and boobs akimbo), and swap partners faster than a square dancer on crack.

Although the teens can be hard to get track of, they're bumped off at a pretty steady pace that makes things much easier as time goes on. Between the mercurial teen relationships, Crispin Glover's rock steady and immensely sweet performance as the bumbling Jimmy (his death is the most heartbreaking - and don't pipe up about spoilers, this is Friday the 13th), and the most vibrant and fun character moments in the entire franchise, this does seem rather like what would happen if John Hughes decided to write a slasher film (seeing as this one seems to have been swept under the rug).

Really I have nothing groundbreaking to say about these sections because for once the disparate elements work in perfect harmony. The teen drama is alternately cheesy and sweet and outrageously raunchy in the best possible way and meshes weirdly perfectly with the darker register of some beautifully realized gore sequences. Tom Savini really pulled out the stops here and ironically, his massive success in this movie perpetuated the studio churning out more Jason vehicles than ever (the next film would follow this one by less than a year). 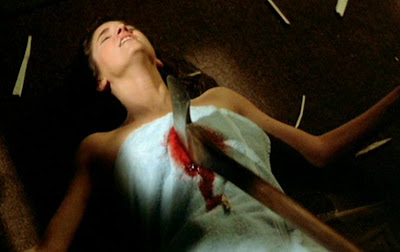 You have to be a special kind of awful to really be able to enjoy this photo but it's enough to bring tears to one's eyes to watch a master at work.

Friday the 13th: The Final Chapter is the quintessential slasher movie. Teen partying. Future stars slumming it. Copious nudity (spread across two skinny dipping scenes, two shower scenes, a changing scene, various sex scenes, and we're just getting started). And plenty of Karo syrup, just for good measure (and to give a hearty middle finger to the MPAA).

Now the things that go into making it a great slasher don't necessarily make it a great movie, which by no means this is. But as a slasher connoisseur it's hard not to expect a certain level of outlandishly exploitative cheese. Slashers being what they were (namely, cheap ripoffs and quickie cash grabs) and the MPAA being what they were (terrible, deeply unhappy people), this is ultimately hard to come by (especially in the post-VHS Hell we now live in) so to find a movie that meets and exceeds expectations is a dream come true.

Allow me to linger on the death scenes for two more paragraphs, because these are what set the movie apart. Forget what I said about the characters, delightful though they are, because they clearly only exist so we can watch them be brutally murdered. Friday the 13th had that figured out by this point so they weren't even trying to give them any sort of depth beyond the basic archetypical characterizations already established within the confines of the franchise.

The creative deficit of Part 3 seems like a distant memory as we see a hitchhiker stabbed through the back of the throat while eating a banana, Paul gets a harpoon gun in the crotch, Jimmy gets a corkscrew in the hand and a machete in the face, one of the twins is thrown through a freaking window, and now this is just a laundry list but it's really just the best sort of gleefully gory mayhem. And Doug's death (his face is crushed against the shower wall) holds up tremendously well both as a shocking gore moment and as a tiny miracle of sound design. 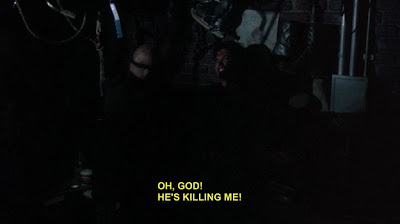 Also an instant classic line. This movie's full of those.

The teens get inevitably whittled down as Trish and Tommy hole up in their home. Jason bursts through the window, but they fight back with the force of a thousand hurricanes. For you see, this is the first film where Jason really and truly dies. And boy does he die. Savini makes good on his promise to destroy his creation and the final sequence is just one long gore setpiece and magnum opus for the massively talented maestro of violence.

Oh, also Corey Feldman shaves his head so he can remind Jason of what he was like as a child or something and that doesn't make sense but it's still alright because everything about the scene is freaking awesome. I can only describe it in fanboy terms because this movie is impossible not to love if you're in any way a Jason enthusiast.

Friday the 13th: The Final Chapter honestly would have been a great note to close on, but boy am I happy to carry on with the rest of this journey.

We'll follow Jason through Manhattan, into the bowels of Hell, and up into the vast reaches of Outer Space.

You ain't seen the last of him. 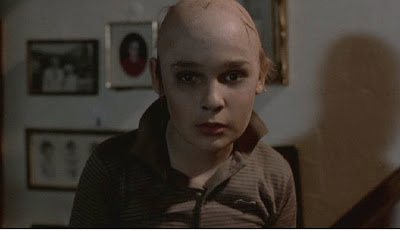 Killer: Jason Voorhees (Ted White)
Final Girl: Tommy Jarvis (Corey Feldman) feat. Trish Jarvis (Kimberly Beck)
Best Kill: Jason himself. He gets a hammer in the shoulder, a TV in the kisser, his hand is split in half, he gets a blade to the chest, and there's a sickening sequence of his face sliding down his own machete. Then he gets ruthlessly machete punched by Corey Feldman. What a way to go. 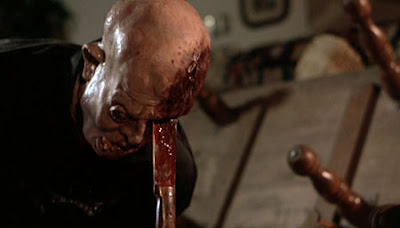 Sign of the Times: I have it on good authority (my notes) that Sara's shirt is very 80's. Unfortunately I remember exactly zero things about what it looked like. And this is the only picture I can find. 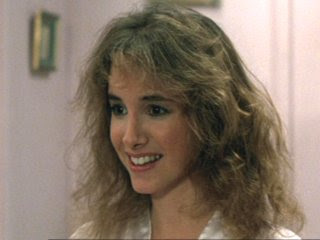 I'll just have to trust Past Me on that one.
Scariest Moment: I'm gonna stick with Doug's death on this one.
Weirdest Moment: THIS

Champion Dialogue: The entire exchange between Axel and Nurse Rose. Ranked in order from least to most hilarious:

Body Count: 14; for once including Jason himself. 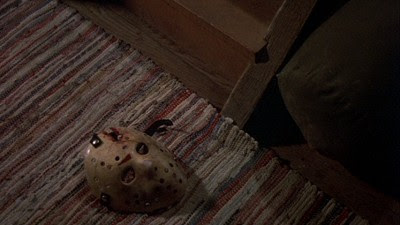