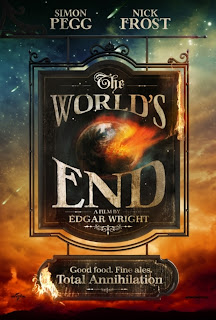 We as a culture are rather obsessed with the end of the world, aren't we?

Perhaps this is a reaction to the massively misplaced hated of the generation that has come to be known as the "millennials." According to web news outlets, BuzzFeed articles, and angry bloggers, we millennials are less intelligent, less informed, more selfish, and so detached from the world that we may as well exist on a planet called "Tumblr."

This is patently wrong, of course. This is the topic for a rather different essay, so I won't expound on my opinions quite as vehemently as I might in conversation. But nevertheless a greatly misinformed older generation is contemplating a future filled with idiots in power (I'm not gonna go there), an inevitable economic downturn, and various bits and bobs of outlandishly pessimistic terrors.

It's no surprise that the end of the world has transfixed our current tastemakers, especially with the appeal of the deliciously sensational Mayan Apocalypse theory of 2012.

Thus audiences were inundated with songs like Britney Spears' "Till the World Ends" and Jay Sean's "2012 (It Ain't the End)" and the less obvious "Give Me Everything," a song about getting' busy because "we might not get tomorrow."

And of course Roland Emmerich had to jump on the bandwagon (what with his predilection for exploding American skylines) with 2009's 2012. Evidently he struck a chord as his worldwide disaster film made $800 million globally.

Nihilism still runs rampant even after the imminent apocalypse has come and gone.

So that's how we can end up with two major wide-release summer comedies that center around the end of the world. This is the End set cinemas ablaze in June and summer was capped off by Simon Pegg and Edgar Wright's final entry into the unofficial Three Flavours Cornetto trilogy (Shaun of the Dead, Hot Fuzz, and...), The World's End.

The film follows the efforts of alcoholic Gary King (Simon Pegg) to reunite his childhood group of friends and complete a pub crawl they attempted just after graduation. Their hometown has twelve pubs (whose names subtly reflect the progression of the story in true Cornetto fashion) called the Golden Mile. Their plan to drink a pint at each of these pubs was derailed something fierce by a bad crop of... drug cigarettes,

Since then the friends have drifted apart. Andy (Nick Frost) is a bland teetotaler. Oliver (Martin Freeman) is a successful real estate agent (I mean "real estate crumpet," or whatever the hell they call it in England) with a bluetooth glued to his ear (a cliché that I'm not entirely sure still holds water). Steven (Paddy Considine) is a recently divorced man who spent his teenagehood in Gary's shadow, losing girls to him left and right - most painfully the beautiful Sam (Rosamund Pike), Oliver's little sister. Also there's Peter (Eddie Marsan), who... I don't even know. He's something. He's the least important.

As they go along their journey, they begin to realize that most, if not all of the inhabitants of their hometown have been replaced by murderous robots. 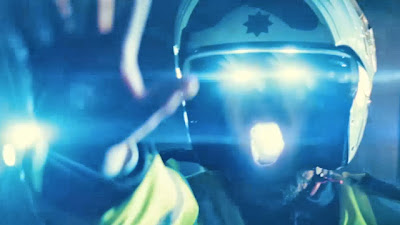 Either that or he accidentally broke open a glow stick. They warn you about that.

The trilogy's classic standard of rapid fire jokes and cuts is back in full force, but it is in support of a much more subdued narrative. There's a lot to unpack about The World's End, and while it's certainly the most intelligent and layered film of its brethren, this is at the expense of out and out hilarity. Where Shaun of the Dead is like being sprayed with a fire hose of comedy, The World's End is more like taking a warm bath.

There are some great and hilarious moments in here of course, that's to be expected for this team of artists. But Wright and Co. are a bit more grown up than in 2004 and commentary about growing up (and apart) and the "Starbucking" of society are more at the forefront. Global homogenization is a topic ripe to be skewered and it is done better here than anywhere else, but it's really just not as punchy.

Perhaps it's not fair to hold The World's End up to the light of the other two movies of what is only nominally a trilogy, but it's just human nature. Life is unfair. 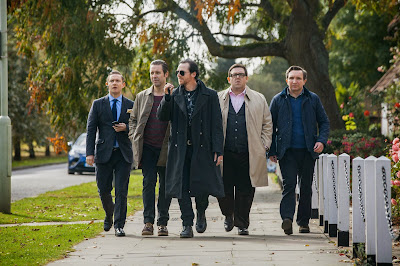 In a righteous world, we'd all have British accents.

So what we have here is an admittedly funny screenplay that's content to be more sober than its brethren. Pun intended.

But when the action gets kicked up a notch (and it does, oh believe you me it does) and the protagonists fend for their lives, the film shines bright as the glowing eyes of imminent doom. The robot fight scenes are truly inspired, filled with wacky slapstick, wry dialogue, and some truly impressive choreography. It plays like the daydream of every youngster who grew up through the Stars, both Trek and Wars, fantasizing about conquering planets in a galaxy far far away.

With these scenes to buoy the narrative, the film never drags. And, I need to make this clear, the movie is really pretty freaking funny all the way through (save one unfortunately repeated joke that relies too heavily on the phrase "WTF" and rings with all the clarity of the Liberty Bell).

The ending is pretty weird, but what are you gonna do?

All in all, The World's End is a film that really isn't meant for my demographic. It's a tender and human depiction of men growing up and entering middle age, which isn't exactly something I can relate to, try as I might. One for the parents, perhaps, with enough sizzling bite and snarky British comedy to propel any younger viewers alongside them.

Unfortunately, most of the adults I've talked to have been put off by one element of the film or another, most commonly the high octane robot angle. So The World's End is a trapeze artist swinging madly over the net, reaching for but never quite grabbing either side. And that's a darn shame. 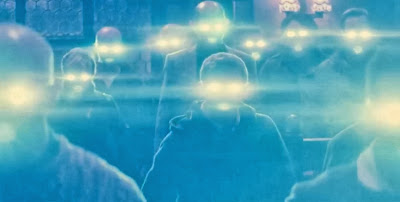 TL;DR: The World's End is content to be more sedate than its predecessors, but still packs a punch.
Rating: 7/10
Should I Spend Money On This? It's all but out of theaters at this point, but I'd say run out to see it while you still can. I want to be proven wrong about the film missing its demographic goals.
Word Count: 1104
Also sprach Brennan at 9:53 AM