CinemaBeach: God Save the Sluts and the Whores 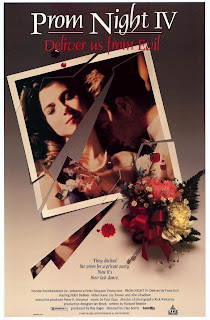 The Canadian Prom Night franchise is one of my absolute favorites. Having dedicated my life to watching a series of weird and terrible movies, these films always deliver. Why, you ask, did I decide to write about the fourth one when you, dear reader, almost certainly haven’t seen all of the others? Because, in the true tradition of direct-to-video slasher madness, Prom Night IV: Deliver Us From Evil has absolutely nothing to do with any of the previous films.
The original Prom Night is about Jamie Lee Curtis’ friends being killed one by one at Hamilton High’s prom on account of a crime they committed as children. Hello Mary Lou: Prom Night II completely ignores that, instead opting to be about the ghost of a Prom Queen who died in 1957 who returns to get revenge on her killers and reclaim her title. Prom Night III: The Last Kiss, the only film in the franchise with a returning character, features Mary Lou (still a ghost) stalking a cute boy and killing his enemies. This film takes a long look at its venerable and thoroughly bizarre history and decides to instead be about a mad preacher killing people who have sex in a secluded house in the woods.
Which, to be fair, is a pretty solid slasher concept.
Prom Night IV opens on Hamilton High’s prom in 1957 (a hopeless leap at continuity with the Mary Lou movies that actually muddies up the timeline even worse than before), where a crazed clergyman, Father Jonas (James Carver) kills a couple who are making love in the backseat of a car. The church decides it is more pious to sedate him for the rest of his life and keep him in a dungeon instead of calling the cops.
When young Father Colin (Brock Simpson, the only actor to be in all four movies of the franchise) is given the task of watching over the captive in 1991 (though the film was released one year later), he fails pretty much immediately and is killed by the stigmata-sprouting Father Jonas, who escapes to a mountain retreat that used to be an old monastery.
The monastery is now a house owned by Mark (J. H. Wyman)’s parents, and as fate would have it, he and his friends are having an anti-prom party (this is the film’s only connection to the “Prom Night” idea beyond the 1957 sequence) there that very night. Also in attendance are Mark’s girlfriend Meagan (Nikki de Boer), an overly pious and thoroughly annoying goodie goodie who is without a doubt our Final Girl for the evening; Laura (Joy Tanner), a naughty blonde Catholic schoolgirl who loves sex and rebellion, in that order; and her horndog boyfriend Jeff (Alle Ghadban).
Father Jonas takes the “sex = death” rule of slasher movies far too seriously and starts killing them one by one while whispering harsh diatribes against sluts and whores. The gross misogyny of the film is only leavened by the fact that we’re obviously not supposed to agree with the killer, but still it feels extremely unnecessary. Plus, whispering killers tend to be pretty cheesy.
Complaining about minor details is useless though, because even changing most of them wouldn’t alter the fact that Prom Night IV is a terrible movie. The most obviously direct-to-video Prom Night venture yet, the camera work is grainy and shaky and Paul Zaza’s score is characterized by sharp stabs of music that seem incidental to what’s actually happening on screen. The movie is bloodless, characterless, there are lengthy stalking scenes that go nowhere, a jump scare is so halfhearted that not even the characters are scared, the climactic chase scene spends about two minutes on a character in no danger climbing up a staircase, and the Final Girl is a shrill harpy who is stupid enough to take off her boots before entering a wine cellar where she has already cut open her foot on a shard of glass.

There are major plot holes, my favorite of which is that the killer has been in a coma for 33 years, meaning he’s probably around 60 years old. There is also an obvious body count padding death when Jeff’s little brother shows up outside, spying on the couples only to become the first victim of the angry Father. However, he has no car and the house in the woods is an hour’s drive from where he lives. It’s not worth it to put any thought into how he got there, because clearly the filmmakers didn’t.
Providing the cherry on top of the Sundae of Tears that is Prom Night IV, there are loads of missed opportunities that could have made this film better, perhaps even good. There is a cool shot of two characters’ heads as seen through loops in a statue, but nothing ever comes of it. Evidently the director saw an opportunity to make at least one artistic moment, but didn’t see fit to make it resonant with anything like a theme.
The most lamentable of these missed opportunities is Father Jonas’ stigmata. Whenever he enters a religious fervor, his hands and feet start to bleed, mirroring the body of Christ on the cross. This is a fairly well-known religious phenomenon, and an important part of the extremely prevalent Christian imagery in the film. At one point early on in the film, Meagan cuts her foot on glass and does the same thing again later in the film when she is hiding from the hissing Father Jonas. In the movie as is, this just shows Meagan is much too stupid to have somehow survived.
However, she could have utilized her injuries to convince Jonas that she has stigmata too, convincing him that she is as pious as him and allowing her safe passage. The fact that this doesn’t happen will forever be an annoying thorn in the side of the movie.
So, to conclude, Prom Night IV is flawed. But in spite of its many many many problems, I still love it wholeheartedly. Being a grubby cash-in slasher film is exactly what I expected of it, being the fourth film in a chain of increasingly low budget movies. This level of mediocrity and insipidity is something I expect and demand from most every slasher film I watch and it delivers in full force. This is a film only for the genre faithful, but it a prime example of the depths to which the slasher could sink but still exist in its purest form.
Killer: Father Jonas (James Carver)
Final Girl: Meagan (Nikki de Boer)
Best Kill: Father Jonas puts on a wig (or possibly a scalp) to look like Laura, kisses Jeff on the mouth, then crushes his skull.
Scariest Moment: When Mark is about to fall off the roof, he must hold onto the Father Jonas’ weapon as it pokes through the tiles, cutting his hands in the process.
Weirdest Moment: Father Jonas starts spraying holy water and things catch on fire!
Champion Dialogue: “Here’s to Prom Night!” “To Jamie Lee Curtis!”
Body Count: 8; 2 killed in 1957, the rest in 1991
TL;DR: Prom Night IV: Deliver Us From Evil is a disaster, but a pretty fun by-the-books slasher film.
Rating: 6/10
Word Count: 1292
Reviews In This Series
Prom Night (Lynch, 1980)
Hello Mary Lou: Prom Night II (Pittman, 1987)
Prom Night III: The Last Kiss (Oliver/Simpson, 1990)
Prom Night IV: Deliver Us From Evil (Borris, 1992)
Prom Night (McCormick, 2008)
Also sprach Brennan at 5:00 PM