Popcorn Kernels: There's A First Time For Everything

In this collection of mini-reviews, we cover two films discussed during the month of October on Scream 101 season 2: First films from famous directors that happen to be horror films.

Duel (For our Scream 101 episode about this film, click here.) 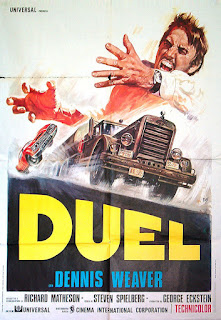 A businessman on a road trip is pursued by a mysterious tanker truck that wants to kill him.

If there’s anybody who should be retroactively expected to deliver a killer first film, it’s blockbuster titan Steven Spielberg. But, unfortunately, he was shackled with a TV movie budget and an impossibly short time frame, so the result is… spectacular. Yeah, Spielberg delivers big on Duel, a debut so preternaturally good that it would take a couple of years before he it that level again (with f**king Jaws. This guy doesn’t mess around.)

Duel, based on a short story by horror master Richard Matheson, does fall into some of the pitfalls of 70’s filmmaking and especially TV moviemaking, like a certain languid pace in its few offroad scenes and a kind of despicable voiceover that rudely intrudes on too few occasions to not be vexing every time. But I’m going to go out on a limb and say that Duel is maybe the most perfect adaptation of a short story ever filmed.

I’m not saying it’s the best movie based on a short story (Candyman, Brokeback Mountain, The Birds, and From Beyond are certainly in the competition). Though it’s probably still in the Top 10, what I’m saying is that, as a direct conversion from page to screen, Duel best captures the spirit of reading a short story. The characters and plot are simple, driven by a single instinct: survival. The story isn’t beefed up with elaborate backstories or random diversions; it’s just a taut, pared-down thriller that crackles at the base of your spine.

As the kind of faceless evil that would frequently haunt screens in the 70’s and 80’s, the truck is superb. Cutting a jagged shape across the dusty horizon of the American highway, it belches smoke and grins with jagged, license plate teeth (an excellently subtle bit of production design – suggesting the truck has kept trophies from its previous victims). And there’s a reason I say “truck” and not “man.” The faceless driver might as well not exist. He’s a tool bent to the will of Pure Evil, something that is never explained or revealed, merely understood as a force of crushing death.

Spielberg captures this chase in a pounding staccato rhythm with his endless coverage flashing between mirrors, dials, gauges, and the road to keep the tension buzzing. Star Dennis Weaver also contributes tremendously, hamming just enough that we believe in the heightened reality of his character. It’s a terrible challenge as an actor to deliver a legible performance with nobody to play off of, especially when they’re mostly confined to a single location, but he pulls it off with aplomb.

Duel is an auspicious beginning for an auspicious director, and it’s a miracle that Spielberg managed to stay this hungry and passionate about his film projects as he did. Duel is a winner, no contest.

Piranha II: The Spawning (For our Scream 101 episode about this film, click here.) 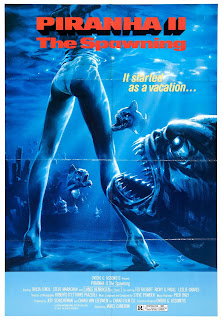 A scuba instructor and a policeman must save a seaside resort from a swam of genetically enhanced flying piranha.

If there’s anybody who should be retroactively expected to deliver a killer first film, it’s box office demigod James Cameron. But unfortunately he was saddled with a microscopic budget and a troubled production, so the results are… pretty deplorable.

To be fair, James Cameron was kicked off Piranha II: The Spawning after about a week or so and silentyl replaced by Italian schlock-meister Ovidio G. Assonitis (maybe he wasn’t credited because he didn’t want people to make fun of his last name). So we can’t blame him for everything we’re seeing, but there’s no denying he had his hands on parts of this film, and 100 percent of it sucks, so statistically speaking, he probably didn’t do a great job in his first go-round. But he followed this up with The Terminator, so I don’t care if his debut was Ass Munchers from Planet X, it was worth it.

And Piranha II: The Spawning isn’t, like, the worst thing that has ever happened. It’s a dunderheaded B-movie with a truly bananas monster (flying piranhas that can survive on land and burst out of people’s rotting corpses, but mostly just look like puppets tossed by some P.A. from offscreen), which is right up my alley, even if it doesn’t capture the sublime campiness and rip-roaring pace that marks the best of them.

In the first and third acts, there are a handful of scenes and character that belong in the bad Movie Hall of Fame (a sunbathing cougar and two topless female pirates are particular standouts), but the movie utterly fails to make anything of them. Most of the characters we meet in Act One don’t even die! We’re left with a second act slog tough plodding military intrigue before things pick up again with a fatal grunion run and the film’s single best scene: Lance Henriksen, who has been searching for his stranded son’s boat via helicopter, finds him and leaps out of the aircraft, letting it hit the water and explode behind him. You know, Coast Guard standard operating procedure.

But too much of the film is too dull to recommend watching it as anything other than as series of two minute YouTube clips. Piranha II’s complete lack of atmosphere smothers it in its sleep. It’s very Italian: A Jaws rip-off that tries vigorously hard not to be exciting except for its random leaps into absurdity. Endless stock footage, repeating effects shots, and buckets of dire conversation weight this unworthy sequel down and it quickly drowns.

A truly dazzling concept does not a good movie make, or even a bad-good movie make. I wish Piranha II did more to earn its best moments, but alas. This fish is fried.