The Devil Can Cite Blatty For His Own Purposes 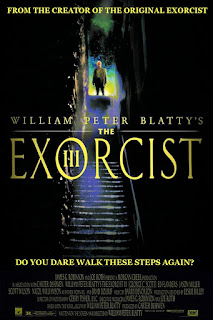 The telling thing about The Exorcist III is that even though it’s creatively compromised, it’s also a course correction for the franchise. That’s how much Exorcist II: The Heretic was a massive supernova disaster. Directed by original Exorcist author William Peter Blatty and adapted from his novel Legion, The Exorcist III has run the gamut between being unfairly ignored and inappositely exalted. Now that we’ve arrived at this stop on our tour through the franchise, it’s time for ol’ Brennan to set the record straight. 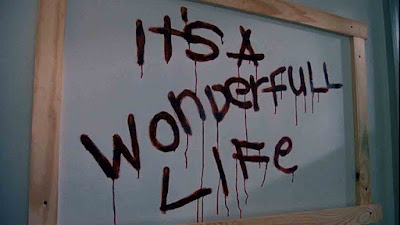 No movie is as good or as bad as anybody thinks it is. You can take that to the bank.

The Exorcist III follows to aged characters from the original film: Lieutenant Kinderman (George C. Scott), the detective who investigated Regan’s murder of a film director in 1973 – Spoilers? I guess. Look, you made it this far. – and Father Dyer (Ed Flanders, hi diddly ho), who was a close friend of young exorcist Father Karras (Jason Miller). The pair are now longtime friends, but Kinderman is being troubled by a rash of ritualistic killings that have broken out, imitating the exact M. O. of the Gemini Killer, who was executed 15 years ago.

Kinderman’s investigation leads him to a hospital where Dyer has recently been bedridden. As more people begin dying, his suspicion grows for a mysterious patient in the isolation ward (Brad Dourif), who seems to him to be the very spitting image of Father Karras… 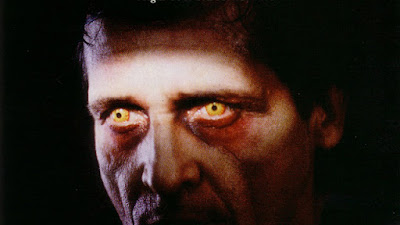 At least in the theatrical cut.

You may have noticed (or probably didn’t, because you have better things to think about) that The Exorcist III is actually a direct sequel to the NOVEL The Exorcist rather than the movie itself, continuing a relationship between Kinderman and Dyer that was in no way established in Friedkin’s film. This is one of many ways Blatty attempts to reassert his vision of the franchise, an impulse that would see him butting heads with the studio at every turn. His novel Legion is vastly different from the story of the MacNeils, and the studio pressure to link the two films is an oppressive presence over the film.

The fact that Exorcist III intermittently succeeds speaks to the strength of his core ideas, because the flick is stuck between a rock and a hard place. Not only was the studio being its usual bullheaded self, the truth is that Blatty really isn’t a very good filmmaker. He manages to craft some reasonably iconic scares here, but he frequently mistakes silence for tension. The most famous sequence in the movie comes at the tail end of a seven minute static shot that allegedly crates a rising sense of dread, but is so poorly framed and sedately performed that the boredom muffles the horror.

And the man has never been able to adapt his own novels. As we saw in the screenplay he wrote for The Exorcist, he has a tendency to abandon important details from the source material, resuting in a stunted narrative arc that leaves the audience behind in the proverbial dust. This problem gets even worse here, because his delightfully loony idea is that The Exorcist III is a theological murder mystery. More police procedural than horror film for the bulk of its runtime, this movie would be a fascinating turn for the franchise if it weren’t for one thing: most of the clues Kinderman uses to solve the crime aren’t actually in the script. That would be like Sherlock Holmes revealing that he knew the whole time that the killer had a key to the room but never mentioned it until the end. 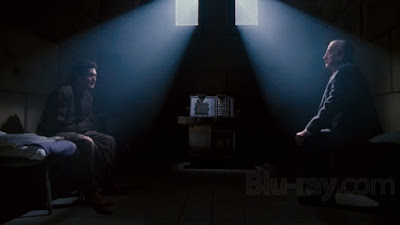 Or if Twin Peaks waited five episodes to even tell you that Laura Palmer was dead.

But in spite of all this, The Exorcist III has an unusual amount of power for a third film in a franchise. The nightmare imagery at play here is so disjointed (one dream sequence features a young Samuel L. Jackson and a cameo by Fabio – how’s that for eerie?) and the offscreen killings so viciously macabre, the film musters enough tingle to keep the spine occupied.

Plus, the movie has a secret weapon. Although the film brags about the return of Jason Miller (a late addition in reshoots, added to increase the link to the original film and play with Kinderman’s perception of the incarcerated killer), his role is only occasionally plastered over the man’s true face. That true face belongs to Brad Dourif, best known for playing the psycho doll Chucky. But here he displays not one drop of the acid sense of humor of the Child’s Play franchise.

No, Dourif’s Gemini killer is a literal demon walking the earth in human form- possession be damned. He is so downright terrifying in this role, with his callous voice slaloming through an unpredictable flurry of rage and calm, that I’m surprised he wasn’t considered for the next year’s Silence of the Lambs. He makes the entire movie without ever getting up from his cot! I’m almost certain that Heath Ledger had this film on a loop while he was preparing for the role of The Joker. It’s a tour de force of horror movie performance, one that argues against the Oscars ignoring the genre every year. 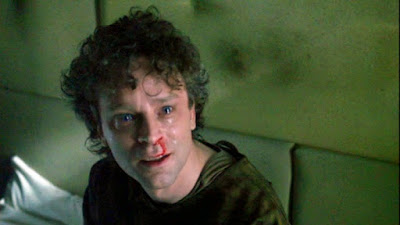 A dude from The Godfather Part III was nominated for Best Supporting Actor that year. You’re telling me we couldn’t have slipped a little Dourif in there?

With Dourif on board, this film could never be considered bad, and I suppose it helps that the dialogue is actually clever and engaging. The ending does devolve into a goody, studio-mandated exorcism that’s so shoehorned in, it requires a character who has no connection with the plot to suddenly teleport into the hospital with no provocation. There’s literally no way he could have known what was happening, unless he had Jean Grey psychic powers. 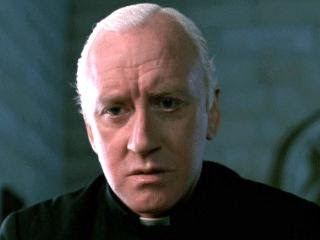 He doesn’t even go here!

After a bit of lovely deus ex machina (and, to be fair, isn’t that quite literally how all exorcism movies end?), the film quietly expires, blowing away like dust in the wind. It’s no classic sequel, but it’s good enough to till be in the conversation all these years later, even if the best thing about it is that it’s not Exorcist II.

TL;DR: The Exorcist III is a decent horror/crime-thriller, even if it highlights William Peter Blatty's weaknesses as a filmmaker.
Rating: 6/10
Word Count: 1091
Reviews In This Series
The Exorcist (Friedkin, 1973)
Exorcist II: The Heretic (Boorman, 1977)
The Exorcist III (Blatty, 1990)
Exorcist: The Beginning (Harlin, 2004)
Dominion: Prequel to The Exorcist (Schrader, 2005)
Also sprach Brennan at 8:59 AM