The Devil Is In The Prequels 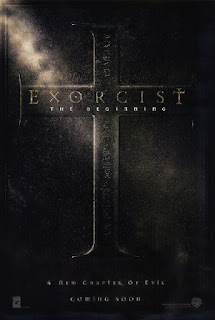 As we near the end of our Exorcist retrospective, we find ourselves with a franchise in a state of desolation. 1977’s Exorcist II: The Heretic was a napalm sandwich of suckage, and 1990’s The Exorcist III suffered at the box office, partly because Part 2 stabbed the franchise in the eye and left it to bleed out in the gutter, and partly because William Peter Blatty seized his opportunity in the director’s chair to eradicate every last element that people loved about the original film. There’s a reason it was 14 years before the franchise showed any signs of life.

The Exorcist, in its fourth entry, went where any cash-strapped series painted into a corner would go: The past. Exorcist: The Beginning took one look at the shambles that the continuity had become and retreated right into prequeldom. That way we can spend time with a character we already know and like, and we don’t have to follow around a 40-year-old Linda Blair as she tries to piece together a coherent character out of the broken splinters The Heretic left her with. 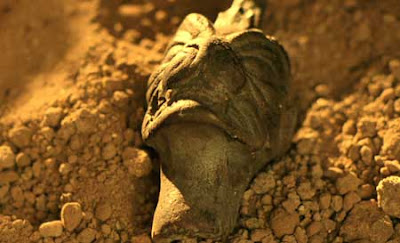 If you thought I was done bagging on that movie, you were dead wrong.

So. The year? 1949. The place? Nairobi, Africa. Father Lankester Merrin (Stellan Skarsgård), 24 years before he would join Father Karras in banishing the demon from one Regan MacNeil, has (guess what) lost his faith. Gee, where have I heard that one before? Surviving the Nazi regime took its toll on his belief, so now he’s an archaeologist skulking around in smoky bars, wearing fedoras and running away from giant boulders and stuff (presumably).

He joins the crew of a dig site that is working to unearth a strange church recently discovered buried in the desert. Unfortunately, it seems like excavating this church has unleashed an ancient evil that is attacking the camp. Little boy Joseph (Remy Sweeney) comes down with a case of the Shakes. And the Rattles. And the Blankly Watches while His Brother Is Devoured By Hyenas. On site doctor and half-baked love interest Sarah (Isabella Scorupco) tries all she can to make him well, but this problem might just need to be solved by an exorcist. Also, tensions break out between the British soldiers and the African workers, because this is a Renny Harlin movie, and if something totally random and loud doesn’t happen every fifteen minutes, he gets hives.

I mean, I guess it worked for Nightmare on Elm Street 4.

For a movie where so much happens, Exorcist: The Beginning is still bracingly boring. I guess that’s what I get for picking a prestige horror franchise this month, even if things went downhill art-wise pretty quickly after the original. There are a lot of nominally interesting or disturbing goings-on, but the movie presents them with such lackadaisical nonchalance that you almost don’t even register them passing by. I blame the editing, which is like a Bonnie Tyler music video gone mad, endlessly sideswiping its own material by cutting away to a flashback or (more likely) something entirely unrelated, cutting back, cutting away to that same thing (nearly unchanged and equally irrelevant), cutting back, and so on like the world’s slowest strobe light. Every scene is chopped into little pieces with all meaning leached out of them.

Of course, it doesn’t help that most of the actual content is a grab bag assortment of studio-mandate gross-outs that have nothing to do with each other. There’s literally a scene that repeatedly cuts to a disgusting birth sequence that takes place in an entirely different location with a character who will never be seen again. Sure, it’s shocking, but it doesn’t match the film we’re actually watching and it actively impedes the scene in progress. It feels like you’re watching this movie on TV, only instead of commercial breaks interrupting the flow, it’s excerpts from Renny Harlin’s dream journal. 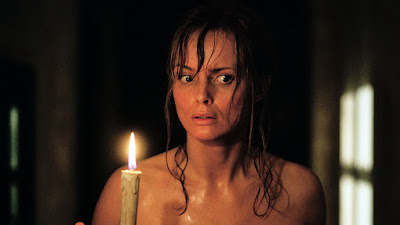 During the infrequent moments where the film settles into a scene for more than 20 seconds, things do get a little creepy. Although most of the effects are rendered with CGI that would look bad in a Pajama Sam game, for once the film’s overdark, murky cinematography works in its favor. Several scenes set around Joseph’s hospital bed provoke genuine fear with both subtle abnormalities and outré violence, much like the original film, though obviously at a much lower quality grade. Let’s not pretend Harlin could touch Friedkin with a twenty-foot, maniac-seeking pole.

The problem is that nothing in Exorcist: The Beginning is consistent. Its subtler scares don’t fit the howlingly bad screenwriting that has Father Merrin arrive at two separates conclusions about the same topic in the span of three minutes. Its weird affection for depicting the psychological aftermath of the Holocaust (Dr. Sarah is a concentration camp survivor) doesn’t jive with the bloodthirsty willingness to slaughter Africans and British soldiers in a shoehorned-in mutiny. And its faux-psychological overtones can’t support the stunted, forgotten arc about the priest’s faith. It’s like every outfit I wore in high school. Nothing matches.

And when it finally comes down to brass tacks (i.e. an exorcism), The Beginning restages the ritual a an Indiana Jones-esque romp through underground caves that involves a lot of punching. That’s how Harlin operates: in loud, carless inanities. It’s a massively muddled film that can’t make sense of itself, at best. At worst, it’s another useless cash-in strapped onto a franchise name that had already perished in destitution some 30 years before.