Cardboard Science: I Am Become Death, Destoroyah Of Worlds 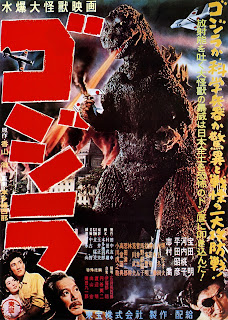 For the second entry of our October crossover series with Hunter Allen at Kinemalogue, the man was far too nice to me by presenting another 50’s sci-fi classic: Godzilla. Our first Cardboard Science feature not produced in the U.S., it’s not as different from the others as you might think. [EN: For the record, for this project I watched the original Japanese cut of Godzilla, which was unavailable in the U.S. until about a decade ago. I did NOT watch the American cut Godzilla, King of the Monsters!, which is fundamentally different and features reshot footage that shoehorns in Raymond Burr, because white people HATE it when everyone in their movies is a different color.]

The first and most important of the giant monster movies known as daikaiju eiga, Godzilla (AKA Gojira AKAゴジラ) ticks all the boxes I’ve come to know and love throughout this project: Giant, irradiated monster? Check. A weird preponderance of military board meetings? Check. A subtextual political agenda? Check. The frightened perspective of a country rocked by the nuclear bombings of civilian cities? 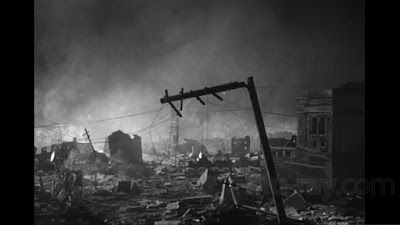 In Godzilla, underwater H-bomb tests awaken an ancient monster from the depths of the ocean: the almighty Godzilla (Katsumi Tezuka & Haruo Nakajima & Jiro Suzuku & Ryosaku Takasugi)!! He emerges onto the shore to crush various Japanese towns. The human beings involved really aren’t important, but we don’t have the budget to show Godzilla toppling buildings in every scene, so they’re a necessary evil.

These humans are Hideo Ogata (Akira Takarada), a Coast Guardsman, and his girlfriend Emiko Yamane (Momoko Kôchi). They work together with her biologist father (Takashi Shimura) and fellow scientist Daisuke Serizawa (Akihiko Hirata) to find a way to stop the rampage. 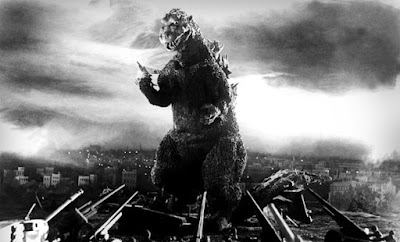 Speaking from Disneyland experience, if you punch a guy in a costume in the groin, that’ll usually slow ‘em down at least for a while.

Remember all those film scholars who say that horror films are a catharsis for societal fears and anxieties? Well screw them, the Japanese figured that out from Day One. Godzilla is such a gargantuan, demanding metaphor for the shadow of the atomic bomb looming over Japan in the wake of World War 2 that even its own characters figure it out before too long. You know I love me some political subtext in my horror films, but this might be one of the most affecting metaphors in genre history, considering it’s about one of the grisliest atrocities ever committed by humanity, from the perspective of the culture it was inflicted upon.

This is no goofy monster movie, like what the Godzilla franchise would become. This is a harrowing disaster film about a country being torn apart. Sure, Godzilla’s googly eyes might seem a little silly nowadays, but this is no laughing matter. These days people probably don’t associate kaiju films with deep national sorrow, but this is a film in which little girls watch their mothers die in front of them, brave reporters perish in the line of duty, and a panicked populace scrambles across the countryside, looking for anywhere safe. Godzilla is a monster, and he’s one that we brought upon ourselves.

And Godzilla’s swath of destruction is especially gut punchy because it looks superb. Sure, there are a handful of 50’s-isms like obvious toy cars crashing, or boats full of people looking completely abandoned in wide shots. And there really is no defending Godzilla’s unblinking plastic bug eyes. But the composite photography that allows Godzilla to share the frame with hordes of fleeing people is exquisite, and his relentless destruction of city miniatures is pretty damn convincing 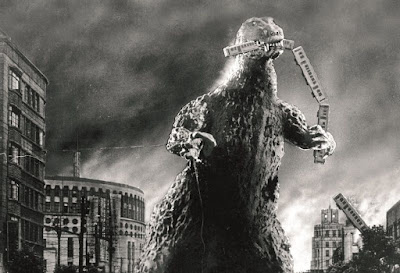 This is why we use practical effects, ladies and gentlemen.

Let’s get this out in the open right now. Every single point I’m awarding to the film is earned by the big lizard monster. The human element here is doing zilch for me. Ogata is kinda cute, but he’s a very reactionary protagonist who doesn’t do anything to drive the plot forward, and his endless scenes with Emiko almost always consist of them discussing some mundane drama with unnecessary vagueness so we can discover the details later, as if the revelations were actually important.

The character Serizawa is the lynchpin for the film’s thesis on weapons of mass destruction and the struggles between scientific good and political-militaristic evil but every other character could be excised and it wouldn’t have any impact on the film. If Godzilla had stomped the Yamane household in the first reel, I literally don’t think I would have even noticed. Godzilla operates better when it’s an Eisensteinian tale about the masses battling off evil, rather than the story of these particular individuals.

But in spite of its unfairly dull second act, there’s a reason the Godzilla franchise has survived for more than half a century. It’s both an impeccable effects spectacle (in fact, it was the most expensive movie ever made in Japan at the time) and a powerful horror film that taps into the collective subconscious of its people, but is broad enough to be understood by the world at large. Hunter has been very very kind with his selections thus far, so I am very very worried about the third and final film in his bag of tricks the other shoe has to drop sometime.