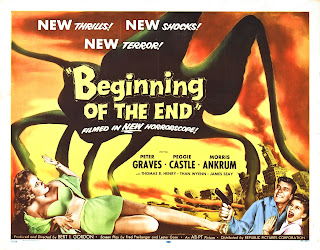 For our third Cardboard Science review in this Halloween crossover with Hunter Allen over at Kinemalogue, he couldn’t have picked a better title: Beginning of the End. And by “title,” I’m literally referring to the name of the movie, because for once this crossover is actually concluding on time, in the month of October. Bust out the ticker tape! I’m so proud. He could have picked a better movie, but Invasion of the Body Snatchers and Godzilla were so solid, I would have even been happy if the last movie was Rob Zombie’s Halloween. And – to be honest – while Beginning of the End is a bit of cliché waffle, it’s not half bad as a sugary slice of vintage entertainment. 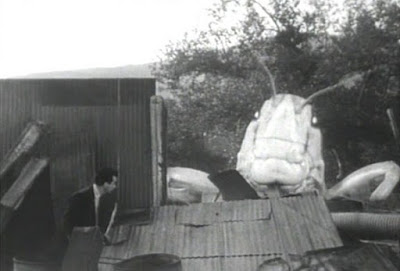 But hopefully not TOO sugary, or it’ll attract bugs.

In Beginning of the End, intrepid reporter Audrey Aimes (Peggie Castle) hits a road block on the way to a story. A literal road block. The national guard is preventing entry to Ludlow, Illinois as the town has been mysteriously leveled overnight, the entire population having vanished. She investigates the local agricultural research center to see if they caused it because Science is Bad, and teams up with the handsome entomologist Dr. Ed Wainwright (Peter Graves), whereupon they discover that giant, irradiated locusts are rampaging through the countryside. They must race to find a solution for this modern plague before the military drops a bomb on Chicago. 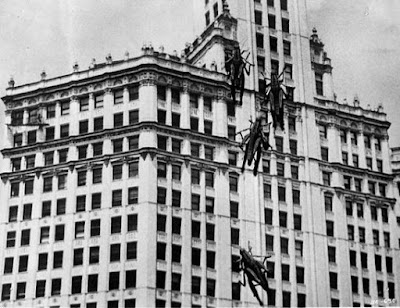 You know, as you do.

Beginning of the End is a thoroughly typical 50’s B-movie. Two patriotic civilians stand up to defend their country, badly composited creatures emerge from behind things on the horizon, and the strong female character is calmly tossed into a corner to twiddle her thumbs when the going gets tough. Been there, done that.

And what it does, it doesn’t do especially well. Giant insects were done better in Them!, a flirtatious couple solving a deadly mystery was done better in the first half of The Giant Claw, and radioactive subtext was already perfectly crystallized in Godzilla. Nevertheless, these tropes are put to work to create a reasonably fun exercise in goofy sci-fi. The living definition of “well, that escalated quickly,” Beginning of the End careens from its gonzo opening sequence (a classic make-out point sequence is interrupted by ten feet of mandibular death) to a town being destroyed (the military arrives less than 3 minutes in, a record time) to grasshoppers swarming the South side of Chicago, and it has a deliciously bonkers good time doing it.

As always, the best effects sequences are left to the imagination, ousted by the budget, and when they do arrive they’re pretty damn shoddy, even on the sliding scale of 50’s B-movies. But the flick, from schlock maestro Bert I. Gordon, is nonetheless resolutely charming. It pulls you in on the level of pure cheese (for the dozen locusts killed during the climax, they endlessly reuse one of three shots), but it does have a little to offer for the non-ironic viewer. 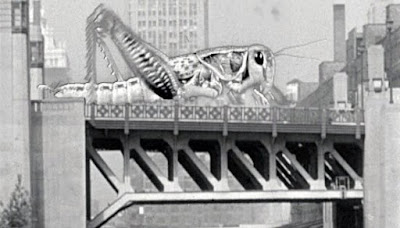 I’m thinking particularly of a scene where Our Hero is experimenting on a captured locust, trying to find the right frequency to lure its brethren to their doom. As the clock starts ticking down, he tries higher and higher pitches, the warbling siren getting more and more agitated, producing the same feeling in the viewer. It’s a truly effective bit of mood creation, and a wonderfully intense scene.

And I must admit, when the locusts interact with miniatures of buildings and city streets, the mostly spotty effects are quite convincing. That really helps increase the credibility of the insects as an actual threat, because their guileless, limpid grasshopper eyes are hardly menacing. Does this aid the feeble metaphor of America being visited with a modern plague in response to Science’s hubris? Hell no, especially considering that it lauds the very man who caused the problem in the first place, albeit inadvertently. But at least they work in any capacity.

Beginning of the End winds up being mostly forgettable thanks to its paper-thin characters, which are bland even by the standards of Cardboard Science (our leads don’t even kiss at the end, because in order to have a romantic subplot, you need to have any sort of chemistry with at least one character trait between them). But it’s certainly a trip down cinema’s memory lane that I didn’t mind taking. If the other two flicks we covered this month were like Steven Spielberg epics, Beginning of the End was at least a solid Peter Berg.