Arrow in the Head: Ripley's Believe It Or Not 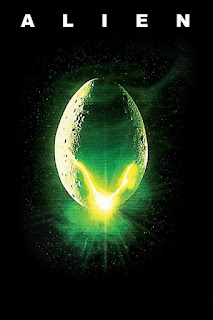 Read my full review at Arrow in the Head.

Additional Notes: I can see why they hired James Cameron to do the sequel to this film. Alien is a massive, unprecedented special effects spectacular that tests the limits of the gooey monstrosities you can show onscreen. And aside from an obvious cut replacing a dummy head with Ian Holm’s and a late wide shot that exposes too much of the Xenomorph’s “dude in a suit”-liness, the effects hold their glorious icky power to this day. H. R. Giger’s orifice-tacular design is gross enough on its own, but it’s realized with tremendous skill.

Like I said, design is what really counts in this movie. Although the basic interiors have lost their charm after years and years of rip-offs and copies, there are subtle elements that still stand out, my favorite being the hatches that swirl shut like a camera lens.

I suppose I should mention the cast, although the human element barely registers in this cold and (literally) alien film. They have solid chemistry and their banter is amusing, although they’re only given a handful of character traits between them. Sigourney Weaver isn’t, like, mind-blowingly good, but she retains her femininity while still presenting a tough, professional attitude, a balance that earns her all the credit she gets for being an iconic strong female character.

I really don’t have that much more to say about Alien, because at its core it’s devilishly simple. I respect what it does and how it works, but as the years pass I’m less and less sure that it’s Ridley Scott’s doing why it works so well. All I can say is, when compared to its proto-predecessor, the likewise Dan O’Bannon scripted Dark Star, Alien is a massive quantum leap forward for 70’s sci-fi.