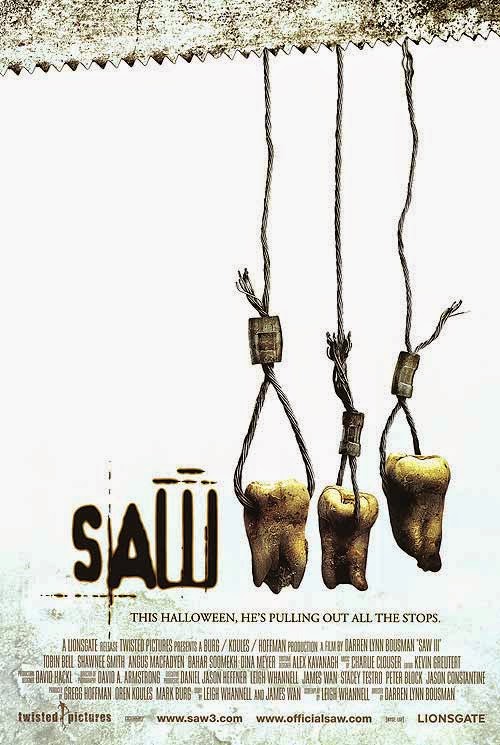 Well, Halloween is over, but the sheer amount of movies I watched at the end of October will give us an extra week of celebration as I get through those reviews during this first week of November. Not that it's not Halloween all year over here anyway, but it's still nice and festive. And what better movie to kick off our post-holiday candy buzz than Saw III, the second sequel spawned from James Wan's unexpectedly massive indie hit.

The franchise was a staple of the October season for nearly an entire decade, a decade in which I avoided the Saw films like chocolate-covered broccoli. I'm currently seeking reparation for that period of my life by marathoning all seven of the godforsaken things. I had a brief hiatus after summer ended because, hey, homework has precedence over torture films. It's a strange world we live in. But I'm back now and better than ever! Unfortunately the Saw films are only getting worse, so it will take all the strength I can muster to sally forth and reach the finish line.

But right now we have Saw III. Still early enough in the franchise that original screenwriter Leigh Whannell is sticking to his duties like a particularly tough strain of mildew. Saw II director Darren Lynn Bousman also reprises his duties here (as he would with the next year's Saw IV - this man put food on the table for three years by finding new ways to tear flesh apart), so if anything, at least the film has a consistent direction with the first and second films.

That direction is directly into the toilet, but at least it still has its integrity. 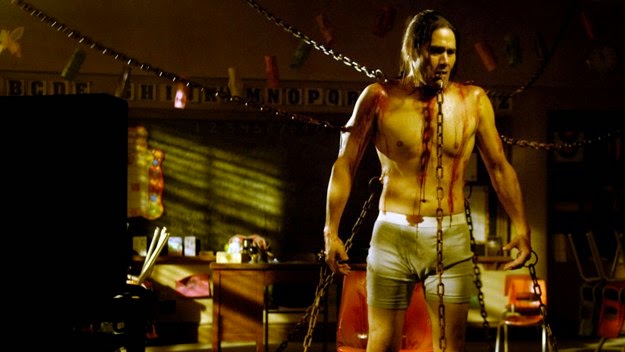 This is the only franchise where this image and that word can be paired together without irony.

The film opens with a perfunctory coda following up on the status of Detective Eric Matthews (Donnie Wahlberg) and his partner Kerry (Dina Meyer) - spoiler alert: it involves a lot of blood - but the bulk of the action revolves around two storylines that have heck-all to do with the events of Saw II. So that's fun. Or it would be, if distancing itself from Saw II didn't mean detaching the tether to the last good entry in the franchise.

The plot - and with each subsequent entry the strain on that word goes stronger - revolves around the ailing Jigsaw's (Tobin Bell) final test. His accomplice Amanda (Shawnee Smith) has rigged it so that if his heart rate drops to zero, the kidnapped Dr. Lynn Denlon (Bahar Soomekh) will be destroyed by an explosive device around her neck. Her task is to keep him alive until after the test is complete, the subject in question being Jeff (Angus Macfadyen), a man whose life is fueled by grief and vengeance after his son is killed in a drunk driving accident. Through a series of gory tests he must learn to forgive the people responsible and move on with his life.

Or he could stand around dilly-dallying and being a useless waffle while the few people he actively decides to save die off anyway because he's too much of a stubborn asshole to respect other people's humanity, even though saving them would do little harm to himself. Perhaps you could extrapolate from that marvelously veiled and subtle sentence, but none of the characters in Saw III are particularly likable, especially this dillhole who leaves a trail of unnecessary carnage in his wake like a chainsaw made of sharks. 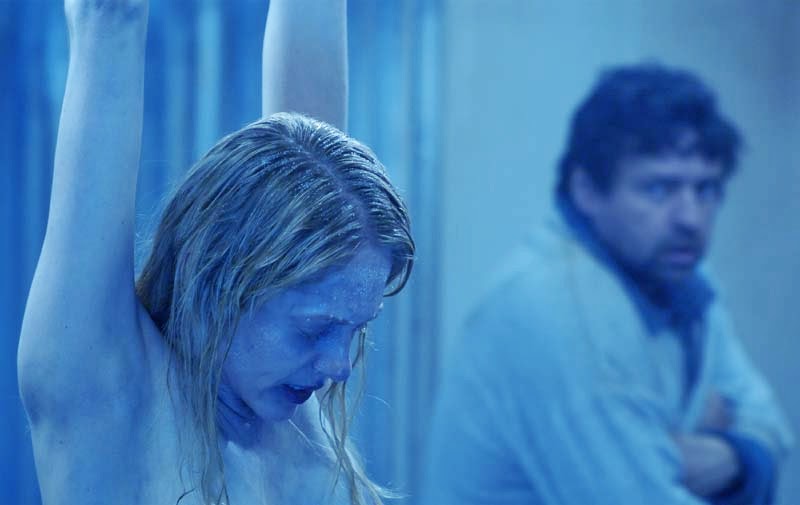 If only I could find a key to unlock this poor woman who is freezing to death. Like this one in my hand. Oh well, she's probably dead already anyway, it's not like I should bother about hurrying or anything. I'm just a loser who whines about his son while multiple human beings are flayed before my eyes. I hope someday people write blog posts about me to commemorate my heroism.

With such a toxic protagonist, it would be helpful if the film had a moral sticking point anywhere to be seen, but alas this is the third film in a franchise, so it's already crossed the line where the villains have become the main characters. Everybody else in the film is just a poorly acted, amoral sack of meat whose opinions, feelings, and aspirations couldn't matter less. They're just there as soulless fodder for the incredibly pornographic gore sequences (of which this film has so many slots to fill, it even included a surgery scene in amid the trappy festivities) - making this the first in the series to truly tip the scales into that most dour of genres: torture porn.

The traps are clever enough as devices with which to marvel at humanity's ingenuity and capacity for cruelty, but gone are even the tenuous links to character development present in the first two films. In lieu of actual human beings, the Saw aesthetic is honed and weaponized and becomes a character far more nuanced and present than anybody else in the entire film. The grimness sets in like a rot - every light that can possibly be tinged green is poured onto the set in a pile (turning everything the color of mucus that has been urinated on), the dubstep-video editing turns itself all the way up to the Skrillex level, and the production design combines all the best elements from all the highest quality dingy warehouses from the Dingy Warehouse Warehouse. The fact that this is the longest film in the franchise means that this cheery atmosphere is jammed into your skull again and again like a rusty jackhammer.

The filthy, low res video charms the eye with its grain the size of actual grain on the side of a Nebraska highway while the ear is delicately tickled with the splintery wood of Whannell's dialogue. I'd prefer not to think about Jigsaw mentioning that he will "sentence" a judge's soul to hell, so I'll divert attention by mentioning that a second act confrontation (and another in the third) devolves into a repetitive shriek circle not entirely unlike that scene in Rocky Horror where they all shout "Janet! Brad! Rocky! Dr. Scott!" on loop. There's a flashback that unnecessarily re-explains the context of the original Saw in a way that actually makes that film less interesting, a mystery in the first act that is easily solvable by anybody who was awake while watching Saw II, and the villains vacillate between Rube Goldbergian pre-planning and Barney Fifish vacuity. I mean, they actually challenge a doctor to keep a late stage terminal cancer patient alive with not much more than a set of Operation prongs and a handful of aspirin. 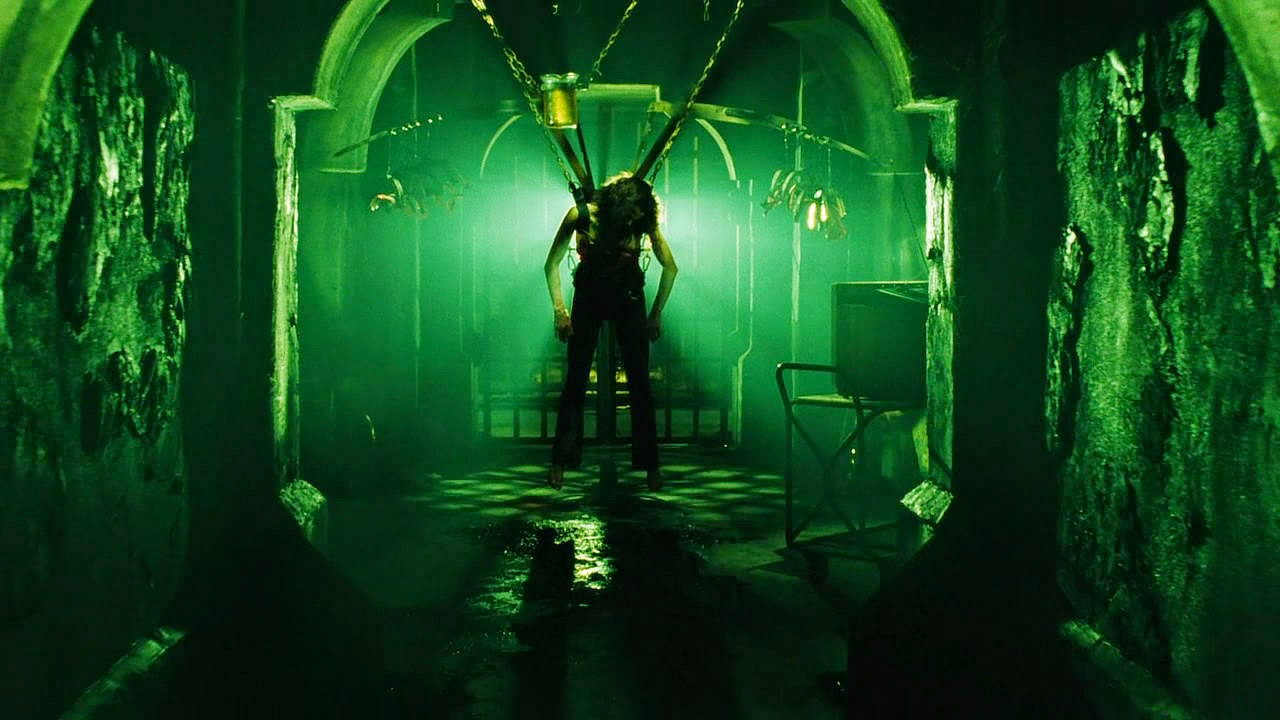 And yet their isolated warehouse/medieval torture device budget is alarmingly high.

But hey, it's not all bad. There's always at least one thing to redeem a movie (unless it's The Outing but the less we talk about that film that happier I'll be with my life) and the Saw films were big studio pictures so you can assume at least one professional was hanging out on set, maybe by the crafty table somewhere.

There is exactly one good scare involving a TV screen displaying a camera readout from a jarring angle. Unfortunately it follows a truly execrable mirror scare, but this is 2000's horror. You take the good with the bad. The most consistently valuable element of the film is the performance of both of the villains. Tobin Bell is always reliable as the ragged and angry Jigsaw, but Shawnee Smith really gets a chance to show off her chops with a much meatier role for Amanda. The character is still an obnoxious psycho, but Smith justifies her actions with a solid core of emotion that I'm grateful was there.

Smith is the film's anchor, preventing it from straying too far from the Saw universe even while it wildly careens in terms of quality. Saw III is never at any point a good movie, but thanks to the increased screen time of the only two talented actors in the entire wretched enterprise, there is a kernel of merit to watching that keeps me at least halfheartedly on the hook for Saw IV. And that's the most I can wring from my motivation, but it will have to be enough.