Out Of The Closet, Into The Fire 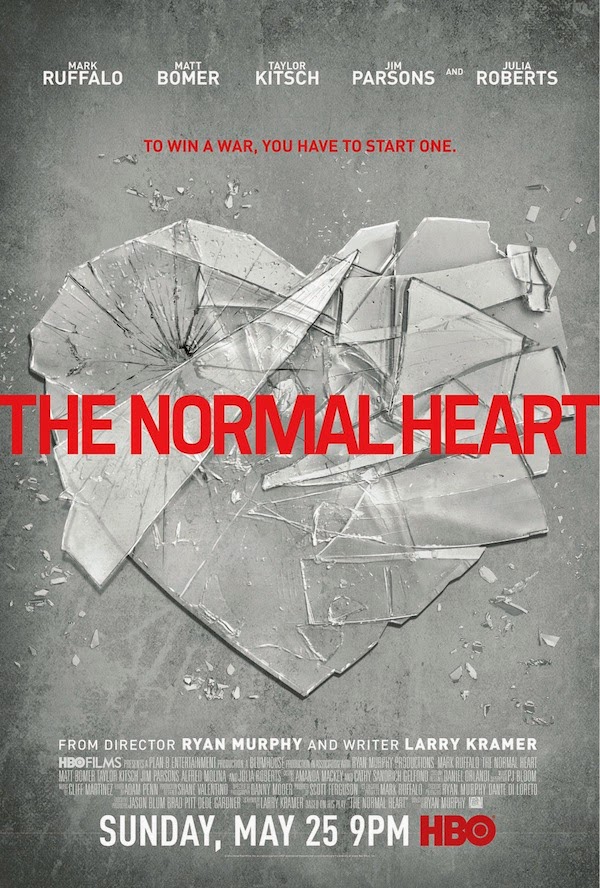 When Sergio first told me about wanting to see the HBO film The Normal Heart I thought "Oh yippee, another dreary gay movie about AIDS." You see, as a gay man it is always nice to see movies about people who think like you, act like you, whatever, instead of the boring heteronormative poobah you get everyday. But the use of AIDS has become such a tired trope that it has become a running joke that you can't watch a movie with LGBT characters without it becoming a tragedy.

So I was understandably wary. Especially considering that director and executive producer Ryan Murphy has a history of headlining ambitious but messy productions *cough* Glee *cough*. But The Normal Heart, a story of the AIDS crisis in the early 1980's based on a play of the same name by Larry Kramer, despite being almost exactly what one might expect in terms of frothy period drama, is also one of the most harrowing portrayals of the disease put onscreen to date.

This ain't no "straight man learns to love the queers" story like The Dallas Buyers Club or Philadelphia, nor is it a quasi-romanticized Bohemian art piece like Rent. The Normal Heart is a straight up medical horror film, depicting the queasy reality of life for gay men in the early years of the decade as they were being cut down in record numbers by a disease that nobody understood and struggling to find anybody willing to help them. 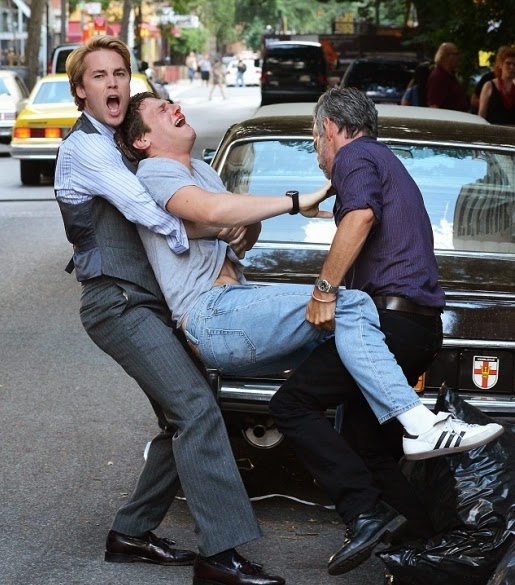 It's gonna be pretty hard to be funny in the captions on this one.

Ned Weeks (Mark Ruffalo) is a gay reporter/activist who, along with several of his close friends, begins the Gay Men's Health Crisis organization to try to spread awareness and promote AIDS research after the death of his friend Craig (Jonathan Groff). With the help of the scrappy wheelchair-bound Dr. Emma Brookner (Julia Roberts), he and the board of the organization work tirelessly to right the wrongs committed by the American government, who seem to be content simply allowing the gays to die in record numbers.

As more and more of his friends and acquaintances end up dead, Ned's anger grows until he is constantly lashing out at the establishment on the air and in person, always shouting, never pulling a punch where he can help it. He can't stand the inequality of a world where a plague that is killing hundreds of people can simply be ignored by their own leaders because they don't want to get their hands dirty with LGBT policy. Perhaps his approach is tiresome and alienating, but it is the exact response a crisis of this level deserves.

When he falls in love with the debonair LA Times reporter Felix Turner (Matt Bomer), he begins to soften until the fateful day that Felix begins showing symptoms. The film turns into a race against the clock as Ned pushes harder and harder for adequate research, drug importing, and social recognition in a world where dead gay men are given no autopsy and stuffed into garbage bags. He's shouting into a void, trying vainly to save everybody he loves from near total annihilation in the face of a new plague.

If that doesn't sound like a horror film, then you clearly haven't seen as many as I have (which, in all likelihood, is probably the case even if you agree). An alienated man with friends and loved ones dying all around him while people in positions of authority are either helpless or unwilling to give aid (pun absolutely not intended)? That could be any slasher movie. That could be any number of haunted house pictures. That IS Jaws.

Two scenes in particular, a wild beach party on Fire Island where Craig's healthy exterior begins to falter and a subway ride where a symptomatic Matt Bomer sees the impact of his condition, literalize that horror undercurrent in a strikingly obvious and resolutely impactful way through jarring editing and stunning cinematography, two of the most (and some of the only) visually impactful moments in a film that derives most of its power from dialogue and performance rather than framing and color. 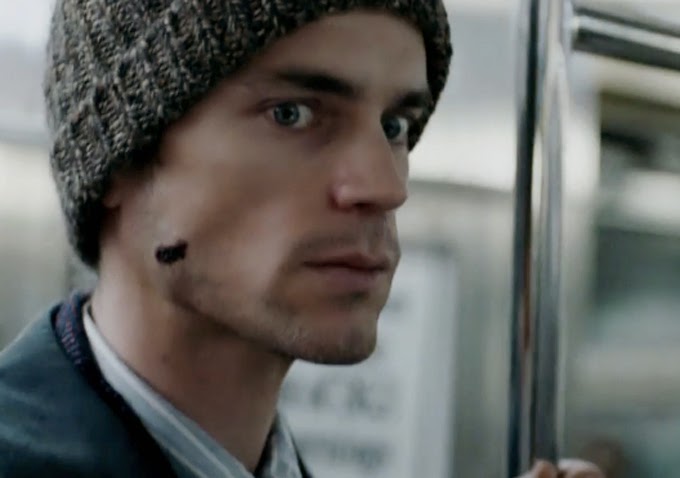 Unless you count skin tone.

Ned is met with opposition from both sides. Hey, you try telling an entire population of gay men who have fought their entire lives for the right to be physical with one another that maybe they should cool it on the whole "having sex" thing for a while while we wait for funding.

I rarely stick with movies over two hours long, especially ones that depict the political process in as much detail as this one, but The Normal Heart has an edge on those other films. It is an absolutely true story, a mind-blowing outrage that 1) Happened just barely over a decade before I was born - that's pretty modern if you ask me and 2) Has gotten nowhere near the amount of press that it deserved.

Sure, people will say that it's sensationalist, that there's two sides to every story. Maybe some straight people wanted to help. Whoop dee doo. They didn't. Not really. And it's hard to ignore the importance of the gay side of the story in the HIV epidemic, but that is exactly what has been happening for decades. 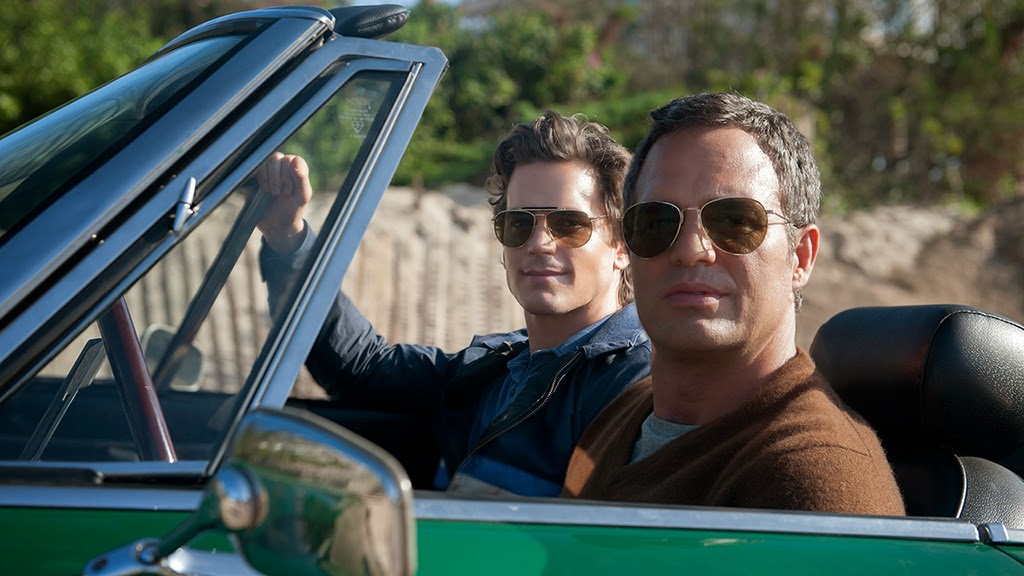 Which is clearly a mistake because: fabulous.

The film itself is haphazard, but strong. Ryan Murphy tips his hand somewhat with a lengthy series of bombastic and on-the-nose Awards Bait speeches and those surreptitious shifts in character that he is so known for. And the film, especially toward the end, has very little in terms of narrative thrust or momentum. The film can be aimless in terms of storytelling more often than it hits the mark. But man, can Mr. Murphy wield an emotional sledgehammer.

The sheer tortuous reality of The Normal Heart is an emotional wringer, operated by winning performances from A-list actors. Julia Roberts and The Big Bang Theory's Jim Parsons especially bring the film an emotional core that shakes your bones and keeps you thinking about the film, even days later. And Mark Ruffalo is a fine actor who turns in a terrific performance, but he pales in comparison to the actually gay actors bringing their all around every corner - most of them, like Parsons and Bomer, drawing upon recent coming out experiences to fuel their rage and alienation.

Even the minor characters bring it all to the table. In fact I'd argue that the little known Danielle Ferland, who doesn't even have a picture on her IMDb page, turns in the most harrowing and committed performance in a cast full of tremendous talents turning it up to 11. I'm not ashamed to admit that I was crying in the car the morning after thinking about her scene. And I'm emotionally sturdy enough to handle LA traffic every day on my way to work. 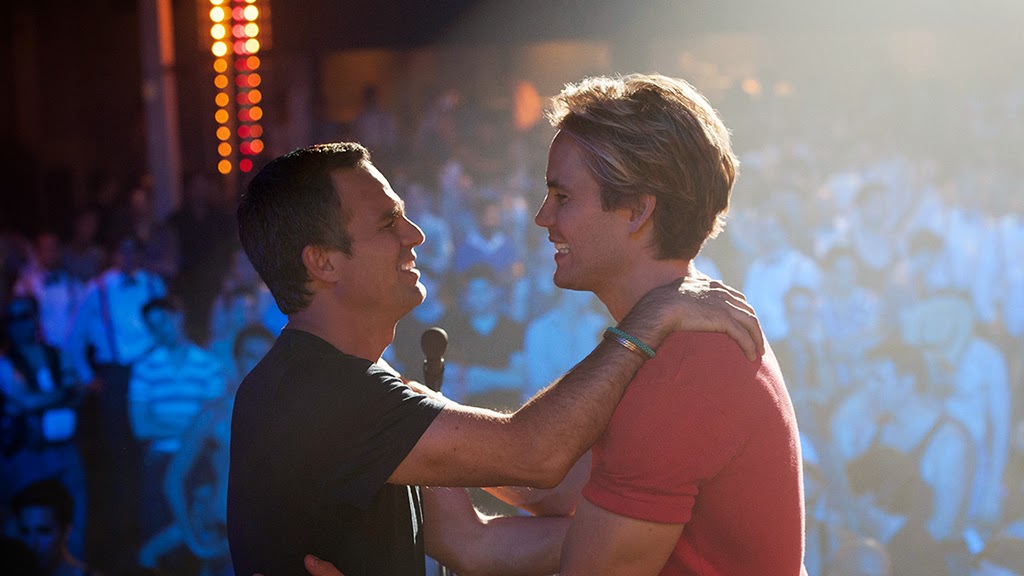 I really should be getting an award for that.

The Normal Heart is an utterly necessary film for our generation and it's lucky enough to have a wide array of stars that will hopefully draw in viewers from a much broader demographic than it might have. It's inelegant and at times overwrought, but there is no denying the tremendous importance of bringing history to life in the most tactile, emotionally raw format imaginable. And not just for gay people. For everybody.

Because this fight isn't over. HIV transmission in America is still at epidemic rates and climbing. It doesn't get the press that it used to once people chilled out about the gay panic and focus shifted to Africa, but everybody - gay and straight - is putting themselves at risk because of lack of awareness. Gay men are still at highest risk of transmission because they are naturally exposed to the top tier of risky behaviors by default, but this is happening everywhere. A quarter of new infections are contracted by heterosexuals yearly and the CDC estimates that, if we don't get more careful now, over half of college aged gay men will have HIV by the time they are 50 and the risk to straights isn't much less terrifying.

Maybe this isn't what The Normal Heart set out to do, but the bleak, terrifying depiction of real life events should spur a new generation to learn the risks and how to prevent them. Living in the sheltered 21st century, it's easy to reduce the impact of what history teaches us, but the film hits a nerve, bringing the horrors of the past to today like no other.

We need to see it, both to learn the true story of the AIDS crisis and to prevent another from striking. To win a war, you have to start one. And that, hopefully, is exactly what The Normal Heart is going to accomplish.

TL;DR: The Normal Heart can be clunky at times but it is a harrowing and utterly necessary film.
Rating: 8/10
Word Count: 1509
Also sprach Brennan at 9:09 AM