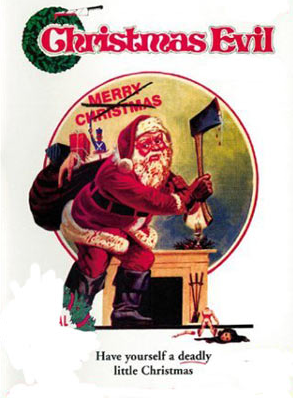 As I've stated several times before, I'm having trouble getting through the back end of 1980 in my Census Bloodbath project, and Christmas Evil, more than anything else, was the reason why. You see, I screened this film several years ago at one of my Christmas Slasher parties and it killed the mood entirely, proving itself to be a dreadful, uninteresting slog.

As such, I had some severe post-traumatic stress dealing with the fact that, according to the very strict rules I have set for myself to provide you with an accurate and entertaining Census Bloodbath, I had to rewatch it. It's hard enough putting on a film like Terror on Tour and pretending that the obviously murky production values could be hiding a good movie inside, but its downright torture staring at a film on the list that I absolutely know is going to be a train wreck.

Luckily Motel Hell provided me a boost of energy that allowed me to choke Christmas Evil down so I can get on with my life. And now that it's over, I never have to think about the film ever again. You know, once I get out this 1,000 word review about it. 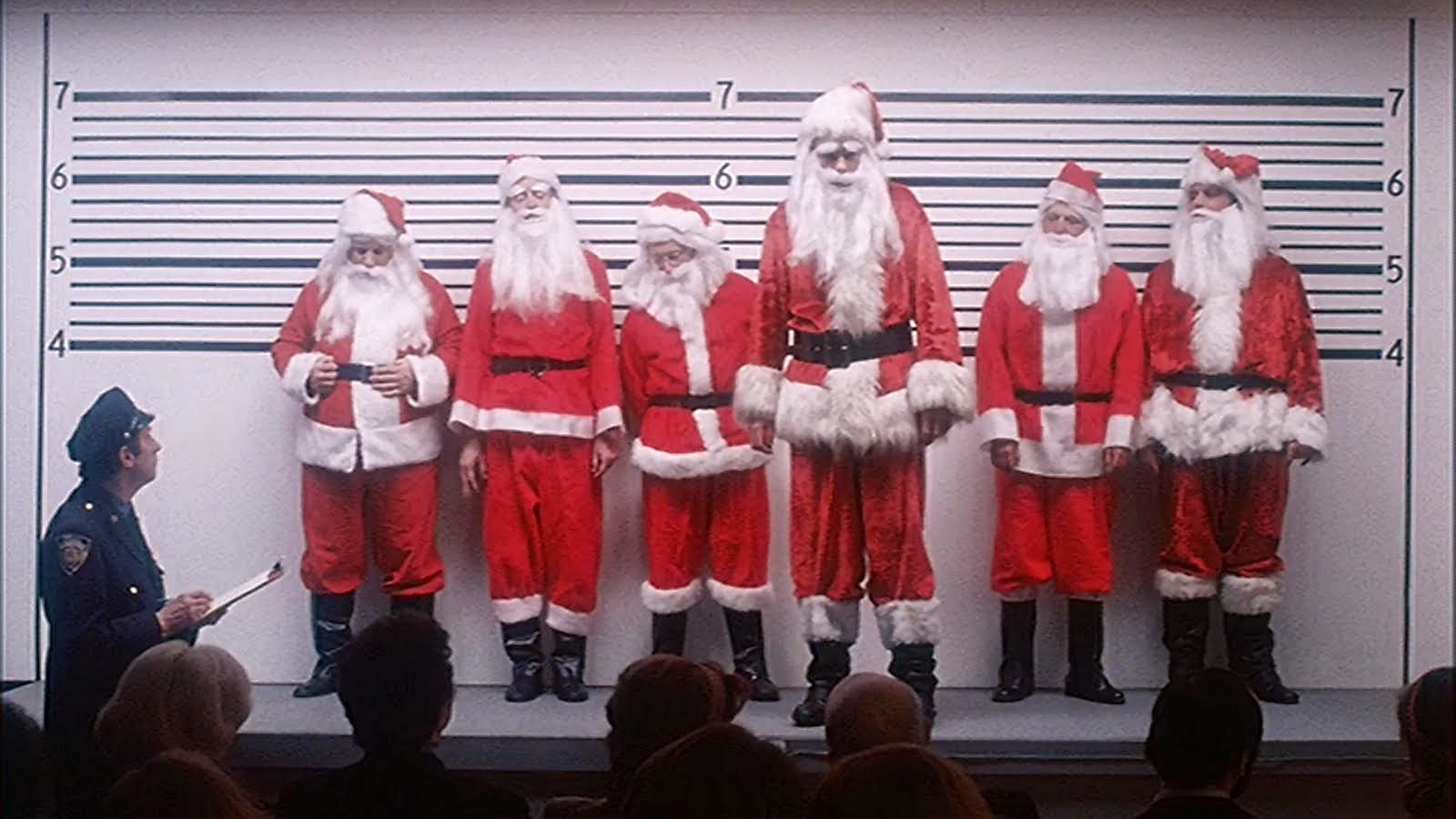 Holiday-themed slashers would soon become a mainstay in the decadent 80's subgenre (and were, in fact, quite firmly established before this film ever came out with Black Christmas, Halloween, To All A Goodnight, and Terror Train) with Christmas slashers especially emerging as a fan favorite, but unfortunately both of the Yuletide Fear movies from the first year of the genre's existence were an utter wash.

Our story begins on Christmas Eve, 1947 (and the further we get away from the 80's, the more ancient these flashbacks seem) when young Harry Stadling (played by Gus Salud as a child and Brandon Maggart as an adult) sneaks out of his bedroom to see Santa Claus, but instead sees his father dressed in a Santa outfit... trimming his mother's tree, shall we say.

The sex is tame enough for a film of this pedigree, but young Harry is mortified, especially considering that he doesn't realize that (SPOILERS) Santa doesn't exist and the man behind his beard is actually his father. Instead of posting a "That Awkward Moment" status on Facebook like a well-adjusted human being, Harry runs up to the attic and cuts himself on a shard of snowglobe glass. 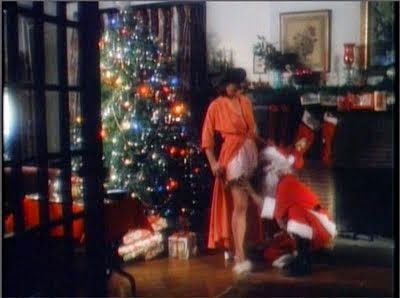 I must confess I had a similar reaction.

Cut to present day and it would seem that our Harry hasn't adjusted as well as one might have hoped. His apartment is decorated with Santa memorabilia, he keeps "Naughty" and "Nice" lists of the neighborhood children (Moss Garcia is the naughtiest of them all and - because there's nothing else going on - the primary antagonist of this supremely unfocused film) and, randomly, he channels Mr. Bean when shaving in the mirror. He works at the Jolly Dream toy factory and loves every minute of it until he realizes that two of his coworkers, the money-grubbing George (Peter Friedman) and the douchey ditcher Frank (Joe Jamrog), aren't partaking of the proper Christmas spirit.

All of this boils down to 45 minutes of Harry interacting with rude people, then returning to his apartment to overact while doing generically chilling things like play with dolls or use a crucible in a room filled with headless figurines. Reading that sentence is scarier than the actual scenes when you remember that Maggart is taking a page out of Rowan Atkinson's book rather than, say, Gunnar Hansen.

The second half of the film, which should for all intents and purposes be the more interesting of the two, is just as aimless as the first. On Christmas Eve, Harry dresses up as Santa and alternates between seeking goreless revenge on his coworkers and spreading Christmas cheer among the local children. Except Moss Garcia. Screw that guy. 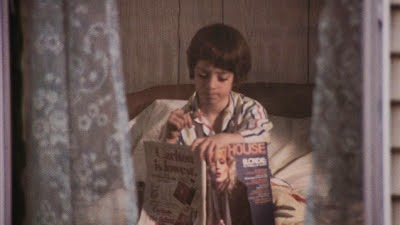 The most evil thing about him is that bowl cut.

There's some deeply embedded twaddle about "he's insane because parents don't believe in Santa/the spirit of the holiday" and "I'm gonna make them dance to my tune," but mostly the film dawdles on one lengthy pointless scene after another.

It's a little bit like taking the SAT, really. It's divided neatly into segments (Harry donates toys to a hospital; Harry kills three people at a church; Harry dances at a holiday party; Harry smothers Frank in his bed), all of them taking much longer than you feel is really necessary. Except, unlike the SAT where there's always a chance of a good score, there's no reward for watching Christmas Evil. Just endless pain and tedium.

The death scenes are confoundingly edited, presumably to hide the low budget prosthetics, but to the detriment of narrative efficacy, ruining the one thing that could have boosted the film up a grade or two. Alas, as it stands, the killings are few and far between (of the parsimonious four in the film, three occur within several seconds of one another and the editing is such that all but the most sharp-eyed of unfortunate audience members won't even realize it happened to multiple people until we see the aftermath) and the gore is underwhelming.

At least the murders are all holiday themed (we see a sack, a toy soldier, and a star put to good, bloody use), so that gives us a leg up on To All A Goodnight. Then again, merely having a lighting designer would give a film a leg up over To All A Goodnight so perhaps it's not something to brag about. 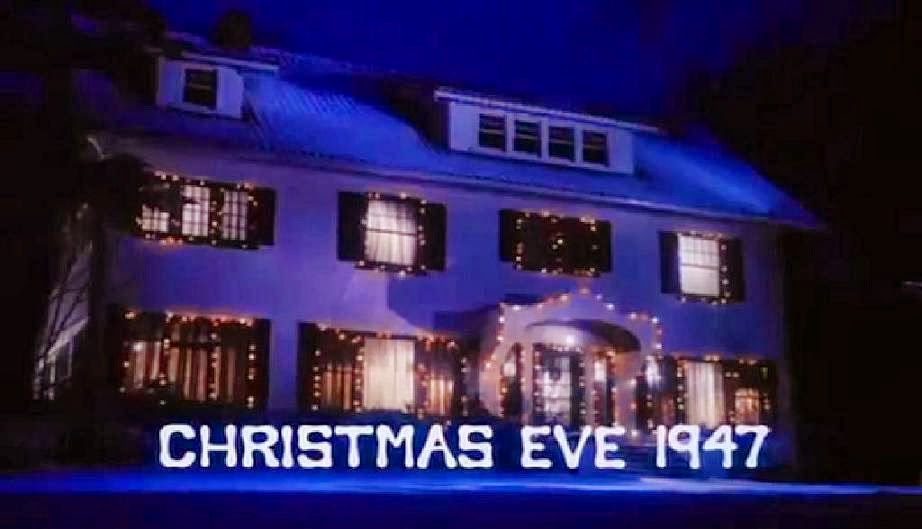 This frame cost more than that entire movie.

There are exactly three things that make the film worth thinking about, although I would argue that nothing makes the film worth watching. The first, and most important, is the music and sound design by Don Christensen, Joel Harris, and Julia Heyward. None of them have done anything of note (pun intended) since 1980, but their manic hellish soundscape is by far the most interesting thing the movie has going on.

When it's not resounding with atonal mockeries of traditional Christmas carols, the soundtrack is working overtime, filling the scenes with rattling sleighbells, jangling chords, and random bits and bobs that effectively propel the theme of one man's descent into madness even when the dialogue and performance do not.

The second is the presence of Jeffrey DeMunn (The Walking Dead's Dale) as Harry's brother Phillip. He's not particularly good and his hair makes me want to stab my eyes out with scissors (come to think of it, maybe that's what his stylist did before cutting it), but it's always interesting to see a well-known actor flounder through the B-movie slums.

The third and final element is the ending, and if you care at all - which hopefully this review has prevented, please feel free to skip to the next section. You see, the film ends with Harry driving off a cliff and flying his van into the night sky as he recites the final lines of "The Night Before Christmas." It's heartwarming and fantastical in a way that every single frame of the film that came before it patently isn't and it's delightfully, criminally insane.

So, in conclusion, never ever watch Christmas Evil. I've done so twice now and look where I am. Don't be me. Stay in school. Eat your vegetables. Never ever put Christmas Evil in your Netflix Queue.

Killer: Harry Stadling (Brandon Maggart)
Final Girl: This is the first and only slasher film I've seen in which there's not even a hint of a protagonist survivor, male or female. This break from formula does not improve it in any way.
Best Kill: A man is stabbed in the eye with the bayonet of a toy soldier.
Sign of the Times: There are actual human people working on a toy assembly line.
Scariest Moment: Harry smiles warmly at the children right after slitting their father's throat.
Weirdest Moment: The protracted scene in which Harry dances to accordion music with a little girl right after his church massacre.
Champion Dialogue: "I wished I was super magic."
Body Count: 4
TL;DR: Christmas Evil is uneven and dreadfully dull.
Rating: 3/10
Word Count: 1431
Also sprach Brennan at 10:25 AM