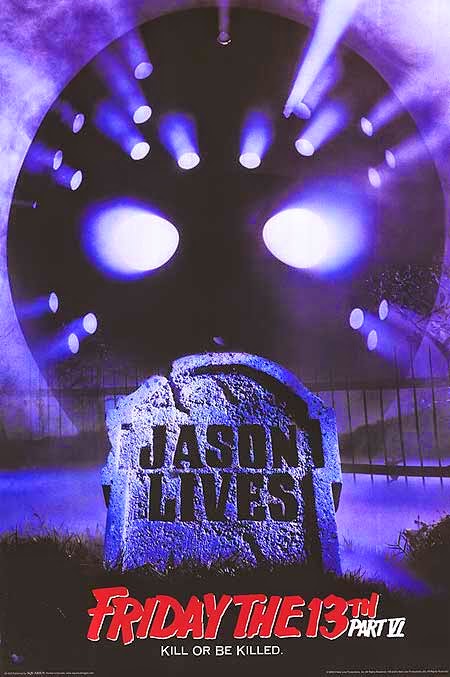 1985's Friday the 13th: A New Beginning was a pile of crap that outraged and alienated its core audience when the hockey masked killer turned out to be a particularly idiotic copycat (the utterly forgettable Roy the Paramedic). But, hey. It still made Paramount a solid 900% profit on its insultingly low budget, and they weren't about to throw that money machine away again.

So Friday the 13th Part VI: Jason Lives was given a slightly improved budget and a juicy summer release date. The one thing left to do was get that disgruntled audience back - hence the hilariously insistent title, Jason Lives. 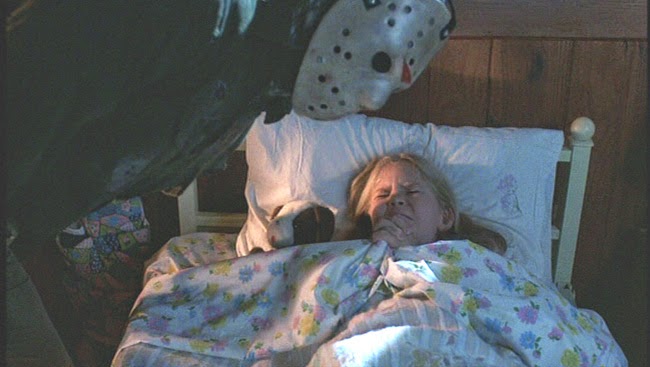 In fact, the entirety of A New Beginning is whisked away with some particularly vigorous retconning. Pam Roberts, enchilada poop, and the Ballad of Ethel and Junior are swept under the rug. And that ending where it's revealed that a grown-up Tommy Jarvis (John Shepherd) has become the new Jason? You must be thinking of some other Tommy Jarvis, because our sexy flannel-wearing hero could never hurt a fly. 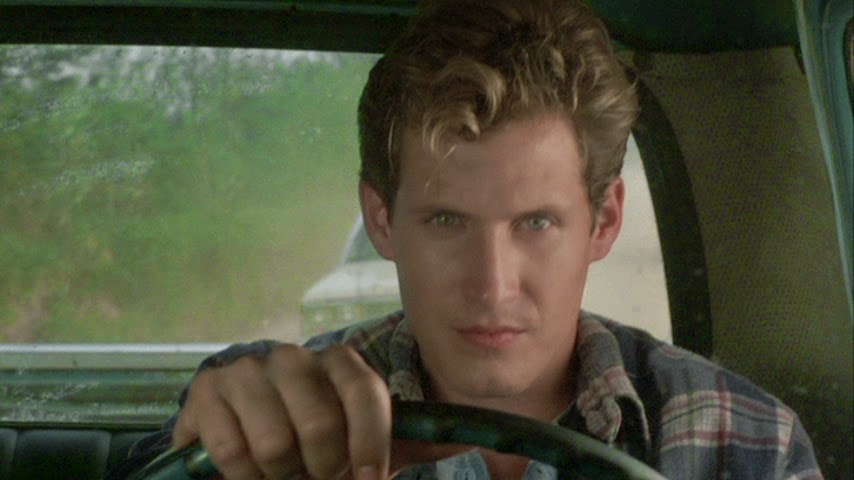 Tommy Jarvis (Thom Mathews) has ditched the institution (to which he has been committed since age 12 for some serious "being Corey Feldman" issues) and returned to the town of Crystal Lake - newly rechristened as Forest Green to help citizens and visitors forget all that nasty business with that pissed off goalie.

Tommy brings his friend Allen (Ron Palillo, one of the main characters on Welcome Back, Kotter) along for the field trip of a brief lifetime when he decides to visit the grave of Jason Voorhees (C. J. Graham) to make sure he's actually dead. You'd think chopping him in the head forty times with a machete would do the trick, but he's bounced back from worse. As indeed he does again when Tommy's ill-advised attempts to impale the corpse on an iron fencepost attract the unwanted attention of some lighting, electrocuting the steadfast serial killer out of his dirt nap.

Allen bites the dust with predictable swiftness in a gore effect (namely, his heart being punched out) that will make the gorehound in you sigh with relief after the uninspiring work in A New Beginning. Overall, Jason is much more ruthless this time around, dispatching his victims with wanton alacrity (including, in one memorable sequence, a notorious triple decapitation), as if hurrying to make up for lost time.

This same scene also showcases the other main characterizing feature of the film, which is also its most divisive - the humor. You see, after Jason kicks off his murder spree and Tommy disappears into the night, the camera zooms in on his eye, revealing a machete-weilding Jason inside reenacting the famous "barrel of a gun" intro from James Bond. This is perhaps the most on-the-nose pop culture moment in the film, but by far not the only moment that absolutely intends to elicit laughter. 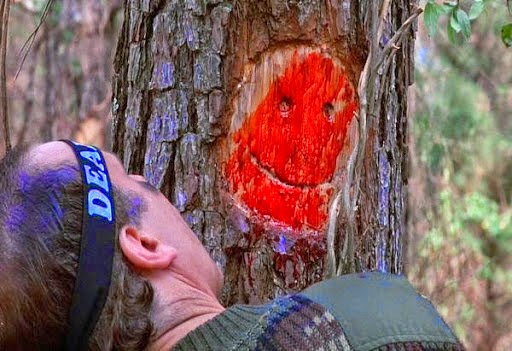 At least I hope so.

Some fans take issue with this, not wanting their horror to be sullied by a camp sensibility (pun not intended, but absolutely welcome). I however, accept this turn of events with open arms, largely because the humorous glint in the script was the brainchild of writer-director Tom McLoughlin, the closest the Friday the 13th franchise ever had to an "auteur."

With such a solid unifying concept and a driving passion behind it, McLoughlin brings a level of effort to the film that the series sorely needed, lest it stop dead in its tracks. His carefully constructed gags (the self-awareness of which may be a turn-off to some, but least of all me) give the film a level of craftsmanship that, while certainly not nearly historically noteworthy, make this entry much more cinematic than many of its predecessors. This couldn't have happened without being McLoughlin's baby and he takes care of it with the respect and grace it deserves. 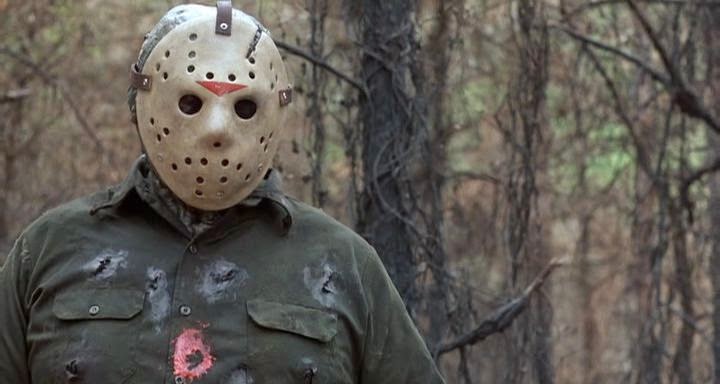 Which isn't a ton, admittedly.

So. With McLoughlin's humor comes a remarkable visual style and a deftness with plot that makes Part V look like a fool with its pants on the ground. You see, Jason Lives juggles not one but two simultaneous plotlines! Maybe that's not worth breaking out the champagne, but after the last film's revolving meat tray, any even mildly involving plot is like an oasis in the desert.

The two interweaving parts are as such:

1) Tommy Jarvis does his best to convince Sheriff Garris (David Kagen) of the return of the now mythical Mr. Voorhees, but ends up on the lam as the decreasingly bemused officer is convinced that Tommy is a crackpot roustabout.

2) The counselors at Camp Forest Green pull pranks, have sex, and most shockingly deal with actual campers. The presence of children provides an edge to the horror like no film before it, but obviously the focus is on our dear counselors. Shall we Meet the Meat?

First off, there's Paula (Kerry Noonan) who defied my initial expectations by not actually being the Final Girl, although in retrospect she makes far too many dumb decisions to deserve that distinction; then there's Sissy (Renée Jones, who has since been in - holy crap - 1,288 episodes of Days of Our Lives), the playful Not Quite Token minority, of which the Friday franchise has a surprising amount in these middle sequels; Cort (Tom Fridley, later of Phantom of the Mall: Eric's Revenge, one of the most excitingly titled 1989 slashers), our designated 80's ambassador with feathered mullet hair, a single ear piercing, holes in his jeans large enough to fit the entire Duran Duran discography, and who dies listening to Alice Cooper; and Megan Garris (Jennifer Cooke), the resourceful and fearless daughter of the Sheriff who has developed something of a thing for one Tommy Jarvis. 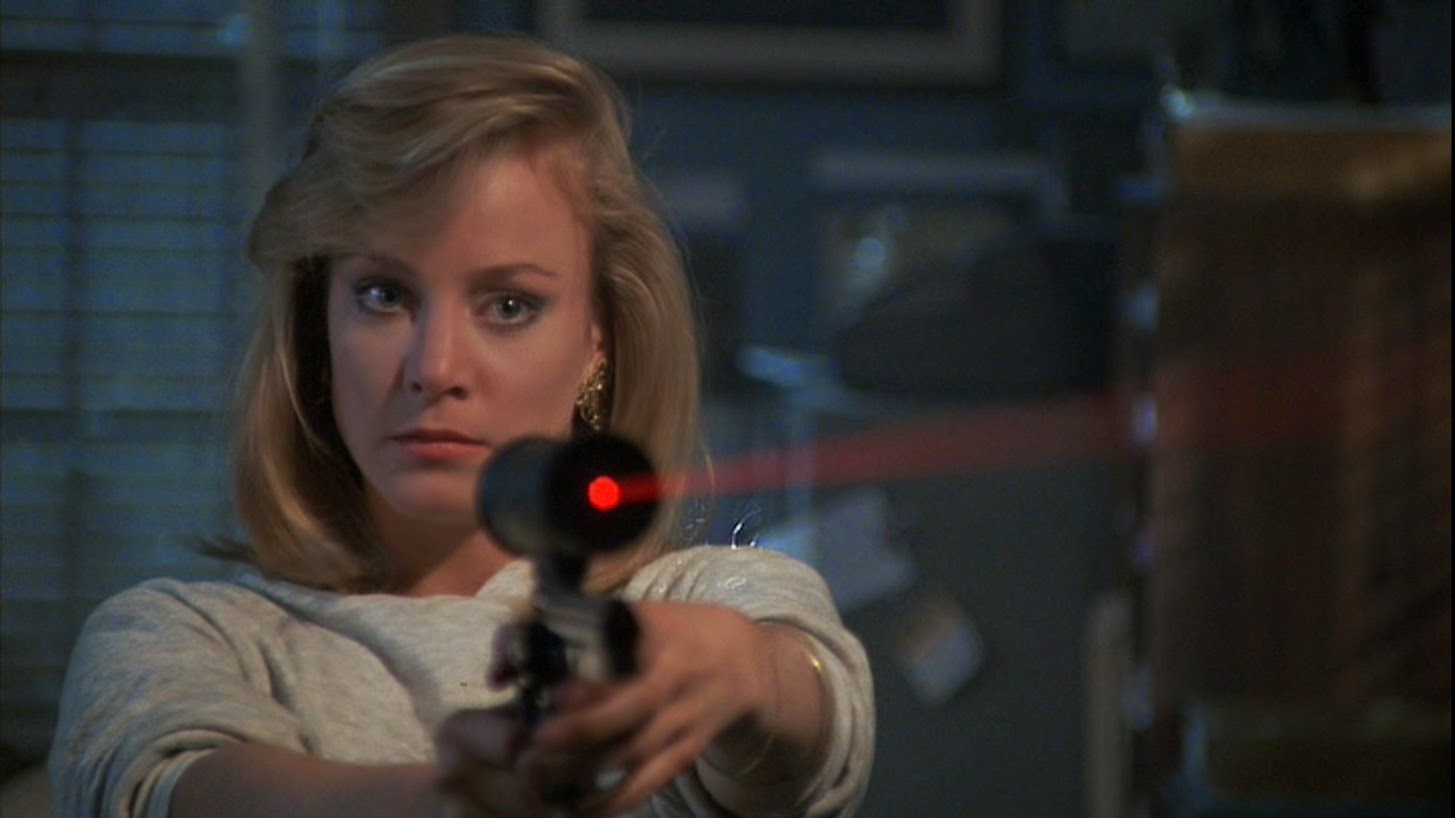 She also knows what to do with a laser scope. My kinda woman.

What's this? A last name, more than one character trait, and a relationship with both key members of the other storyline? Ladies and gentlemen, we have met our Final Girl. In fact, Megan will prove to be one of the better Final Girls in the franchise with her cleverness, bravery, and sense of fun. She's also the only person with enough narrative momentum to move fluidly between the two mostly separated plot branches, fitting in perfectly to the action adventure mold of Tommy Jarvis' flight from the cops and the spritely teen slasher that is occupying some other realm entirely up at Camp Crystal Lake Forest Green.

And she doesn't have sex during the film (which is wise, because she has far more important things to do), but she's a young woman with a clear libido who ends up surviving Jason's wrath, which is a huge step forward for gender representation in the franchise. 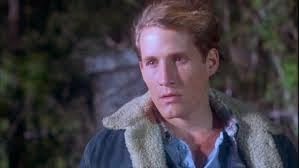 No wonder Tommy likes her - hey, I think I used to own that coat.

Jason Lives is one of the most idiosyncratic and special entries in the entire franchise, a delightful blend of post-Nightmare supernatural horror (Jason is quite decisively a zombie this time around) and pre-Scream meta humor.

The visual spectrum is 100 times wider than A New Beginning, the first entry in the second phase of the franchise, ever could have dreamed of with multiple shots that would be considered among the most graceful in the entire 12 film series. Most notable among these shots are one where Jason stalks a girl from outside the window of the cabin she's in and an early centered shot when he is menacing his first new set of victims after his resurrection. Again, I can't stress enough how that, in any other Hollywood film, this kind of visual effort would be totally commonplace, but here in the Fridayverse it stands out like Hitchcockian caliber perfection. 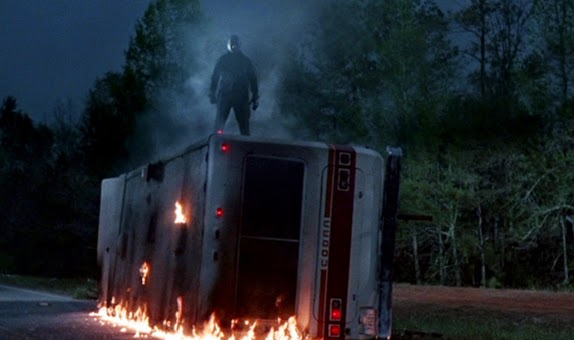 Jason = This movie. The RV = A New Beginning.

The acting here is also of a higher caliber than normal with even bit parts like the offed-early Lizabeth (played by the director's wife Nancy Mc Loughlin) bringing a warmth and easygoing charm to their roles. Mathews and Cooke especially have a lighthearted chemistry that complements the film's good humor tremendously.

At the end of it all, Jason Lives isn't quite a scary film - slasher films are never scary - but it is an immensely charming and well put-together sequel that could even be considered a slightly "good" film in a franchise known for overt badness. It's not quite as gory as the Savini-fueled original and Final Chapter and it doesn't boast the hilarious insipidity of entries like The New Blood or Jason Takes Manhattan, but it is certainly a top tier Jason flick that deserves a lot more respect than it typically gets.

Killer: Jason Voorhees (C. J. Graham)
Final Girl: Tommy Jarvis (Thom Matthews) feat. Megan Garris (Jennifer Cooke)
Best Kill: I'm a big fan of that smiley face one, which occurs when Jason smashes Burt into a tree.
Sign of the Times: Everybody, I'd like you to meet Cort. 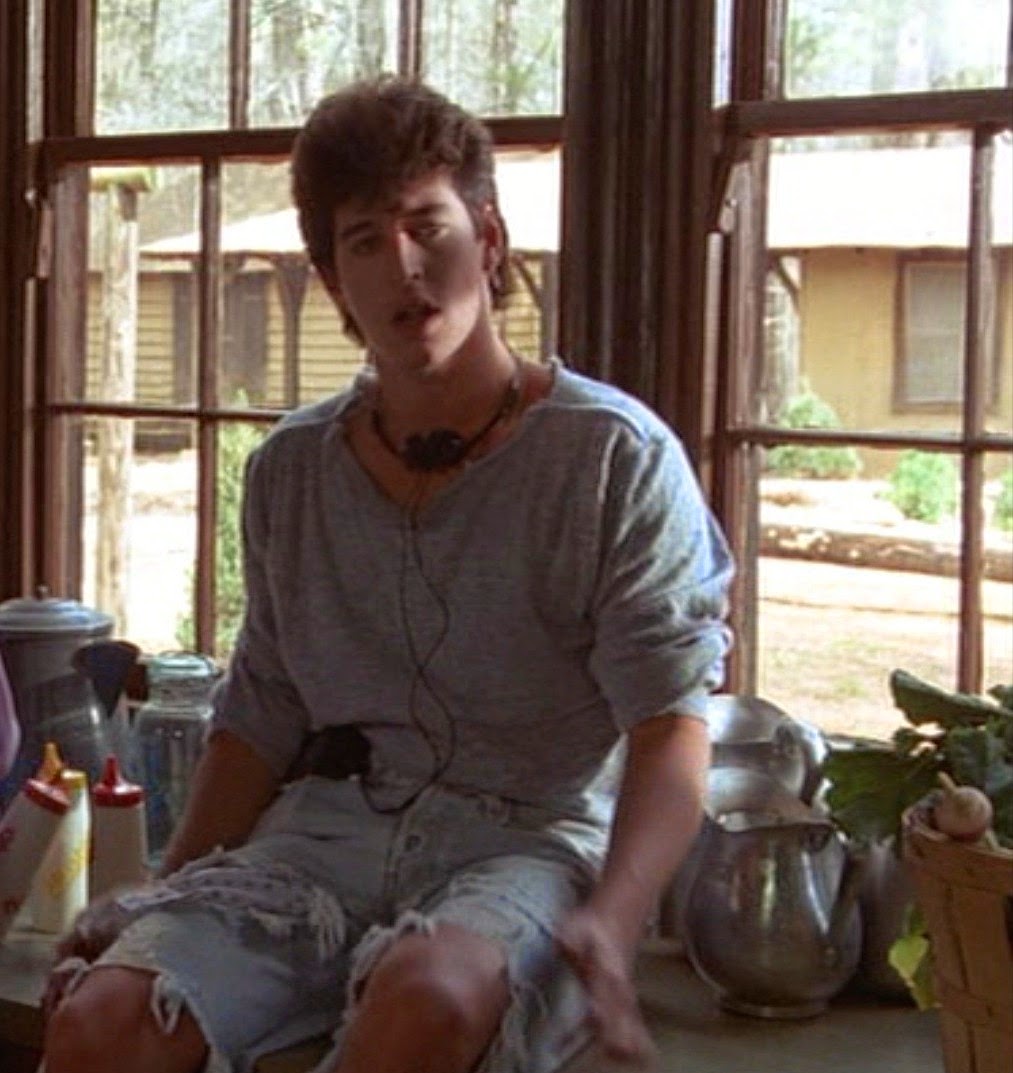 Scariest Moment: Jason stalks a counselor while she's walking among the children in the cabin.
Weirdest Moment: Two fully clothed people have sex in an RV.
Champion Dialogue: "He can't come to the phone right now. He's in the can draining his lizard."
Body Count: 18