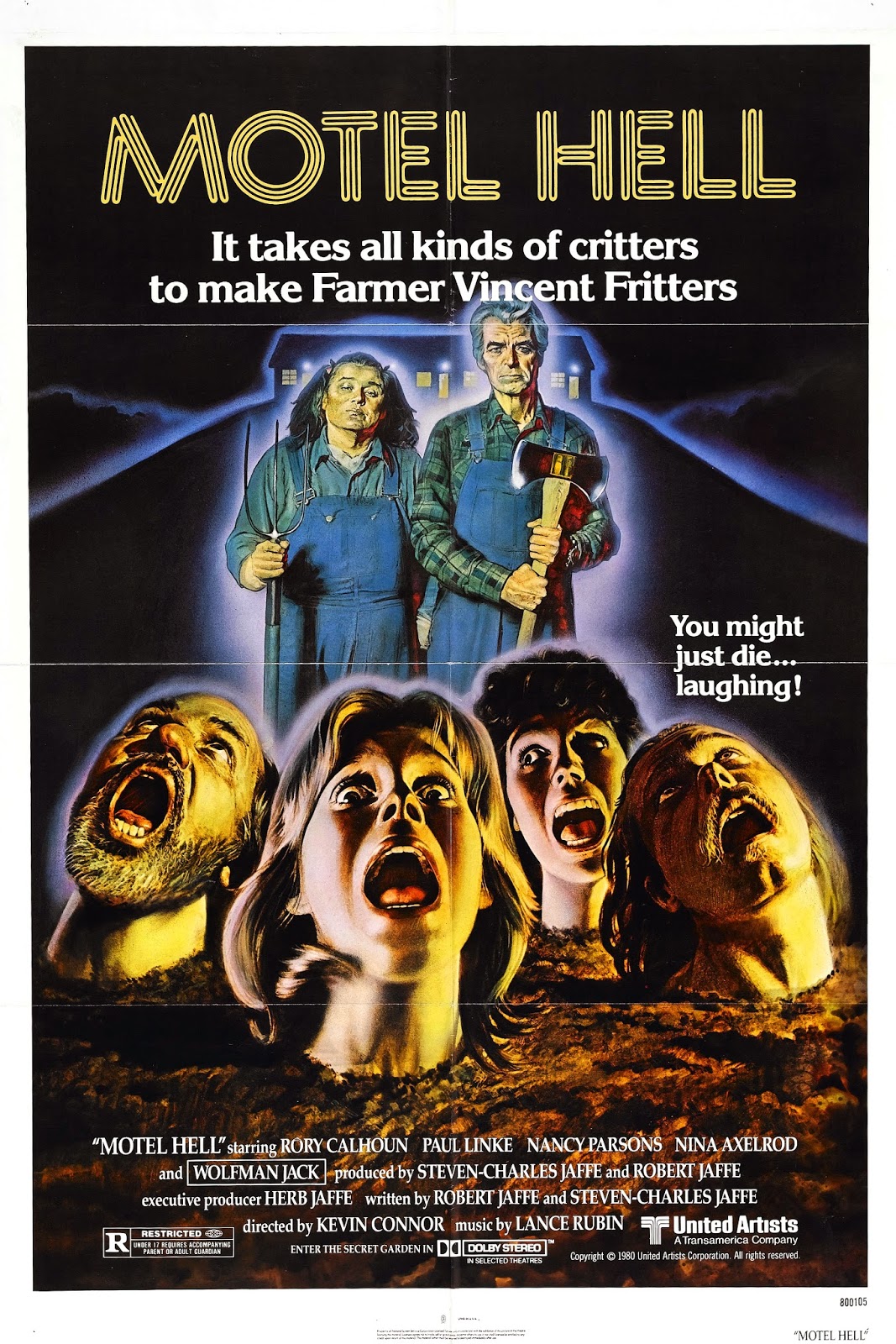 As it turns out, Motel Hell is barely even a slasher at all, but I sure am glad I watched it. This strange little film has a checkered past, beginning as a script passed around by Tobe Hooper in the late 70's fresh off of the queasy success of his masterpiece The Texas Chain Saw Massacre. It was deemed too dark and disturbing even for Hooper himself to direct so it was shopped around for years, changed into a black comedy, and given to up-and-comer Kevin Connor.

I can't speak for audiences in 1980, but after thirty something years, the comedy has all but aged out of Motel Hell (save one laugh out loud funny line toward the end). When held up against the mess of unintentionally hilarious films that came out between 1981 and 1989, the premise doesn't seem so absurd, not that the comedy was necessarily even a hit the first time around. Basically, it just seems like a particularly dumb horror flick played straight.

But the fact remains that, comedy or no comedy, this weird little grindhouse holdover is idiosyncratic to the extreme. It's almost completely goreless, but it wins you over with tremendously strange performances and, occasionally, surprisingly well-executed scare sequences. 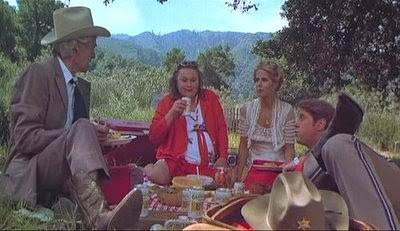 This is not one of them.

It goes like this. Farmer Vincent (Rory Calhoun, who was once a handsome young swain who shared the screen with no less than Marilyn Monroe several times over his career) and his sister Ida (Nancy Parsons, who holds the high distinction of being in all three Porky's movies) own a backwoods lodging, Motel Hello. One of the letters on the sign is burned out. Can you guess which one?

To pass the time, they ambush passing cars, bury their victims in the garden, cutting their vocal cords, feeding them through funnels to fatten them up, and serving them to community as Farmer Vincent's Smoked Meats. Hey, this was before the Internet. I mean, what else are you gonna do?

One day, when Farmer Vincent takes out a couple on a motorcycle in the middle of the night, he falls for the beauty of the girl, Terry (Nina Axelrod) and takes her in to recover against Ida's wishes (at this point I still thought she was his wife because their sibling relationship is not made clear until the least comfortable moment). When she wakes up, she is distraught to learn that her boyfriend Bo (Everett Creach) perished in the crash.

Little does she know that her boyfriend is closer than he seems. He's buried in the garden gurgling for help (seriously, that vocal cord thing is chilling) alongside Bob the Pig Inspector (E. Hampton Beagle) and a local rock band known as Ivan and the Terribles, one of whom is played by Pixar favorite John Ratzenberger. 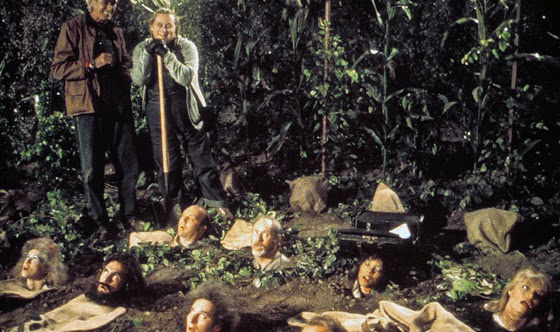 The more you know.

For the bulk of the film, Motel Hell ineptly juggles two tones - the horrific scenes that take place within the garden of heads while Vince and Ida trade idle chitchat and the "funny"/ idyllic country moments like when Ida and Terry go inner tubing or Sheriff Bruce (Paul Linke), Vince's little brother, chases lovers away from make-out point so he and Terry can watch a drive-in movie through binoculars.

Without a doubt the horrific scenes (like the one where the victims rise from the dirt like zombies) are much more effective overall, which is startlingly unique for the horror-comedy genre, which typically favors the funnier scenes. It's a good thing too, because without the interesting frights that Motel Hell provides, it would be a rudderless and bland flick with only a few strange elements thrown in for flavor.

Because, let me tell you, this movie is strange. At one point Terry tries to sleep with Farmer Vincent, easily thirty years her senior, and immediately accepts his proposal of marriage, presumably so she can take this withered old man to pound town.

Maybe she saw him in How to Marry a Millionaire and is willing to pretend.

Then there's the climactic final battle in which Vincent puts a pig head over his own and has a chainsaw fight with his little brother. This image is the most iconic from the film, but it's utter nonsense in context. There's no reason for him to cover his face because everybody involved knows who he is. Presumably, he can't see at all because a pig head is, you know, solid. And the chainsaw fight isn't even played for laughs. It's merely a happenstance with no musical accompaniment and very very poor fight choreography. 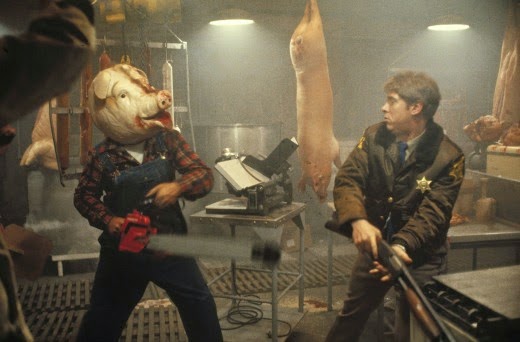 At least it looks rad.

Because of the chainsaws and the grindhouse premise, as well as the previous attachment of Tobe Hooper, Motel Hell has been commonly compared to The Texas Chain Saw Massacre. This isn't entirely inaccurate, but people are missing the point. Because there's an even better reason to compare it.

Both films are what I like to call Vegetarian Conversion Dramas, depicting humans being treated like animals in a slaughterhouse and used for food. Although it is obviously unfair to compare any horror film to Texas Chain Saw, especially something as inconsequential as Motel Hell, this is an important thematic through line in both films and should absolutely be addressed.

Obviously Hooper's grimy classic does it better, but Motel Hell isn't one to scoff at. One of the scenes where the horror and the comedy blend most perfectly is when Vincent and Ida hypnotize three of the Terribles, then snap their necks painlessly in a manner quite similar to how cows are typically offed. It's horrifying and it really makes you think about how you would feel if you were one of the animals trapped on a ranch and fattened up only to be killed, never given freedom or love.

Mind you, I'm not gonna stop eating steak, but the mere fact that the film implores you to take this position shows that it has more of a head on its shoulders than it seems. 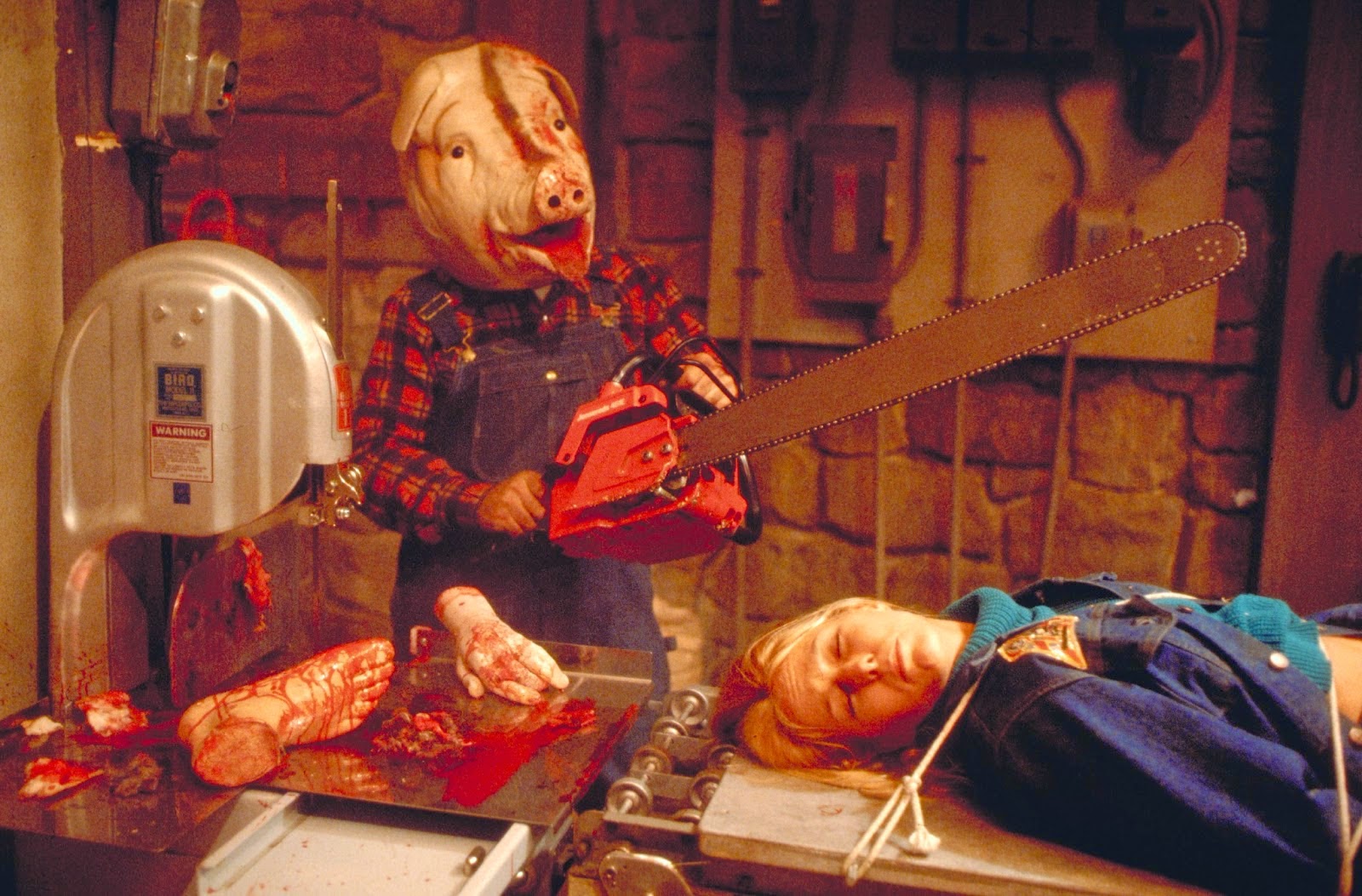 A pig head, to be precise.

So without a doubt it's an intriguing gem to mine despite its enthusiastically poor quality. The gore is not all there and the performances range from shriekingly unbearable (Elaine Joyce as a swinger who likes to use a whip) to hit-in-the-head-before-every-scene woozy (Nina Axelrod. Oh, Nina.). Luckily, the film can rely on Calhoun and Parsons to provide its hectic energy, but the production values aren't exactly impressive.

And let's talk about that Final Girl, shall we? Terry is a woman who, for absolutely no reason, decides to stay with the Smiths after her accident. Where was she even going before her motorcycle crashed? She has no internal drive whatsoever and is perfectly content to marry an elderly man she just met because, well, hell if I know.

She's a guileless airhead who manages to get herself knocked out at least four times over the course of the movie and ends up tied to a meat processing machine like a silent film actress on the railroad tracks. When your film has the exact same gender representation of a movie from the 20's, we're going to have an issue, you and me. I'm not even going to mention how she awards herself to Vincent and then Bruce as a prize to be won after saving her life.

Whoops, I mentioned it. I shouldn't let myself boil over about gender politics in a 1980's movie because goodness knows there's worse coming, but seriously? This is the best we can do for our female lead? Anyway, Motel Hell was OK. There's issues with gore, acting, visuals, you name it, but there's enough charm in the villains and enough fear in the whole exercise to keep it going down smoothly as one of the weirder late-period grindhouse works. 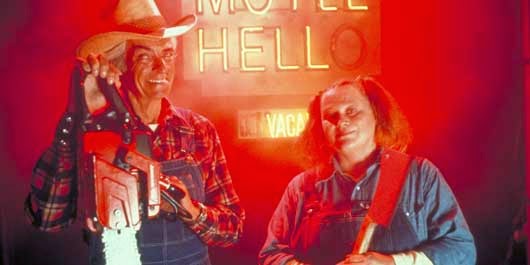 Killer: Farmer Vincent (Rory Calhoun) and Ida Smith (Nancy Parsons)
Final Girl: Terry (Nina Axelrod)
Best Kill: Ida gets what she deserves - namely, being buried headfirst in the soil.
Sign of the Times: Debbie's friend likes to dress casual when she drives. Nothing fancy, just her shiny silver jacket over hot pink pants. Throw in those white boots and you're traveling in comfort and style.
Scariest Moment: Bob the Inspector approaches a bag-covered object on the ground as it emits a guttural watery noise.
Weirdest Moment: Two swingers stop by and are too busy cracking whips at lamps, shaving themselves, and smearing nut lotion on each other to notice that Vincent and Ida aren't merely seeking some relaxing bondage play.
Champion Dialogue: "We'd like to continue to enjoy your meat, Mr. Smith."
Body Count: 7
TL;DR: Motel Hell is a strange little creature that's worth a look for enthusiasts of toothless grindhouse.
Rating: 6/10
Word Count: 1528
Also sprach Brennan at 12:17 PM