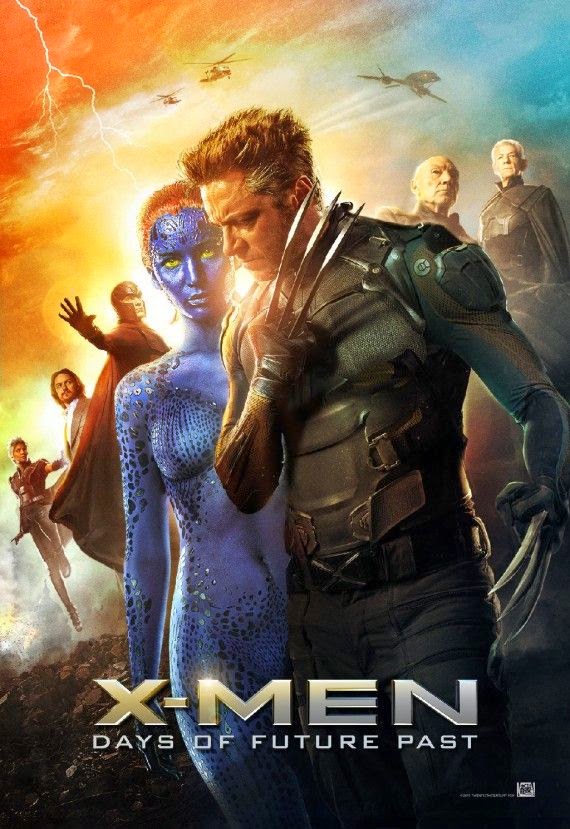 The X-Men film franchise has been going strong since its inception in 2000 with two sequels, two Wolverine spinoffs, and a quasi-prequel in 2011's X-Men: First Class. Because of the preponderance of alternate universes in comic books, which provide the source material for these films, First Class and its sequel Days of Future Past take place on an alternate timeline, which helps clear out some of the muck that has backed up over the years.

First Class was an interesting action exercise setting the origin of the X-Men into a historical context alongside the Cuban Missile Crisis. According to the sequel, this sort of mutant Forrest Gumping has continued for the following decade and our favorite heroes and villains have been involved in everything from the Vietnam War to the assassination of JFK. 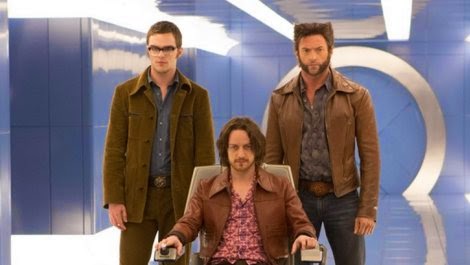 And the invention of the lava lamp (probably).

All of this meddling has inspired the mutant-hating Bolivar Trask (Peter Dinklage) to create the Sentinel Program, a highly advanced robotic system designed to trace the X gene and wipe out the mutants before they bring upon the extinction of humanity. When Mystique (Jennifer Lawrence) murders him in his office in 1973, instead of stopping his intolerant menace, it merely proves to the government that mutants are a threat and they use her DNA to create Sentinels capable of adapting to any mutant attack.

This sets off a chain of events that leads to more or less the destruction of the entire mutant race and the planet. On the Earth of today, cities are desolate wastelands and the mutants roam the rubble in hordes, constantly on the move to escape the Sentinels that track their every step.

It's a bleak and grey world, but the return of some of the original X-Men cast brings me too much joy to be as disappointed in the state of the planet as I should. Although the roles hardly amount to more than glorified cameos, we get Magneto (Ian McKellen), Professor X (Patrick Stewart), Kitty Pryde (Ellen Page), Storm (Halle Berry), and Iceman (Shawn Ashmore, my one and only) back together again.

It is enough to make any fan of the original trilogy weep tears of joy that wash away any and all traces of the emotional wreckage that X-Men Origins: Wolverine left in its path. 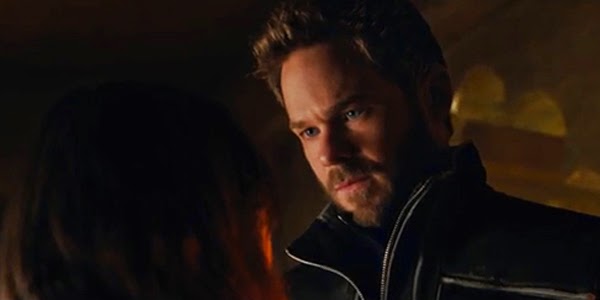 Kitty Pryde must use her newfound time traveling powers (if you have a complaint about this, please lodge it with Shannon) to send Wolverine (Hugh Jackman) back to 1973 and patch things up between ex-lovers friends Charles Xavier (James McAvoy) and Magneto (Michael Fassbender) to unite them in preventing Mystique from carrying out her murderous intentions against Trask and setting the world on a course that leads to ultimate destruction.

But time is limited, you see! The central conceit of the time travel this time around is that Wolverine is sent into a former consciousness, which means that he technically hasn't traveled backwards in time, merely into a shadow of his former self. So as time progresses in 1973, it does so in equal increments in the present day as the Sentinels draw closer and closer to their prey.

This is a genius way of creating a sense of urgency and raising the stakes, although it doesn't quite take until the second act, when cross-cutting becomes more of a prominent phenomenon. Although I do wish we could have spent more time with the original X-Men, this is a devoted sequel to First Class, remaining faithful to that film's characters, themes of discovering one's own identity amid the broad stokes of history, and sizzling homoerotic tension. 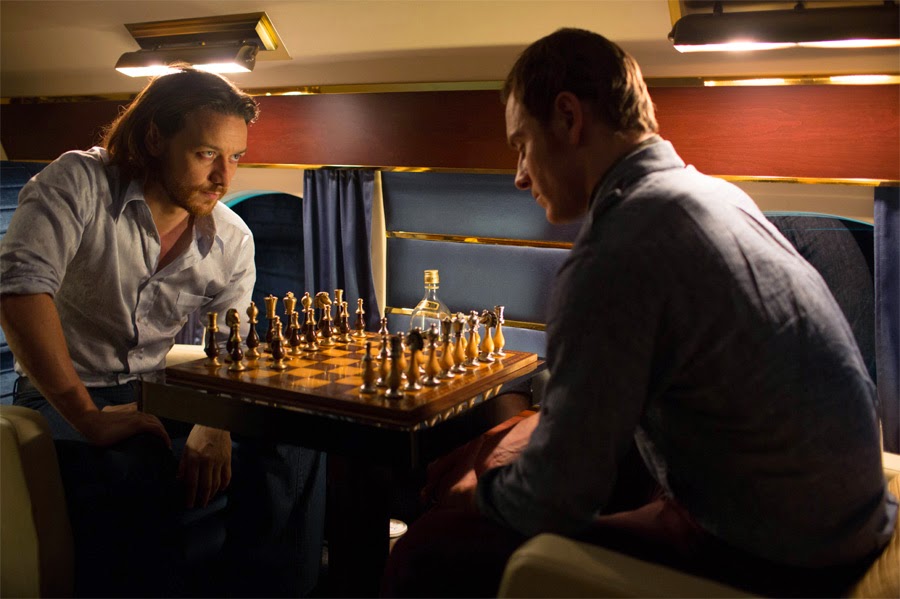 I'm serious. You can't make this stuff up.

The film is largely a success, deftly navigating through crackling action sequences and pithy humor with sure footing. In fact, the best scene of the film is a combination of both as the newly introduced Quicksilver (Evan Peters) uses his super speed to greatly amusing and powerful effect.

Before the film's release, it was doubtful whether Peters would be able to hold his own when performing alongside such giants as Jackman, McKellen, Stewart, and Fassbender, but the kid seamlessly inserts himself into the universe as an important and necessary comic relief. The American Horror Story darling isn't about to get an Oscar nomination any day soon, but he's certainly proved that he is worthy of being respected as a character in his own right and not a one-off annoying cameo. 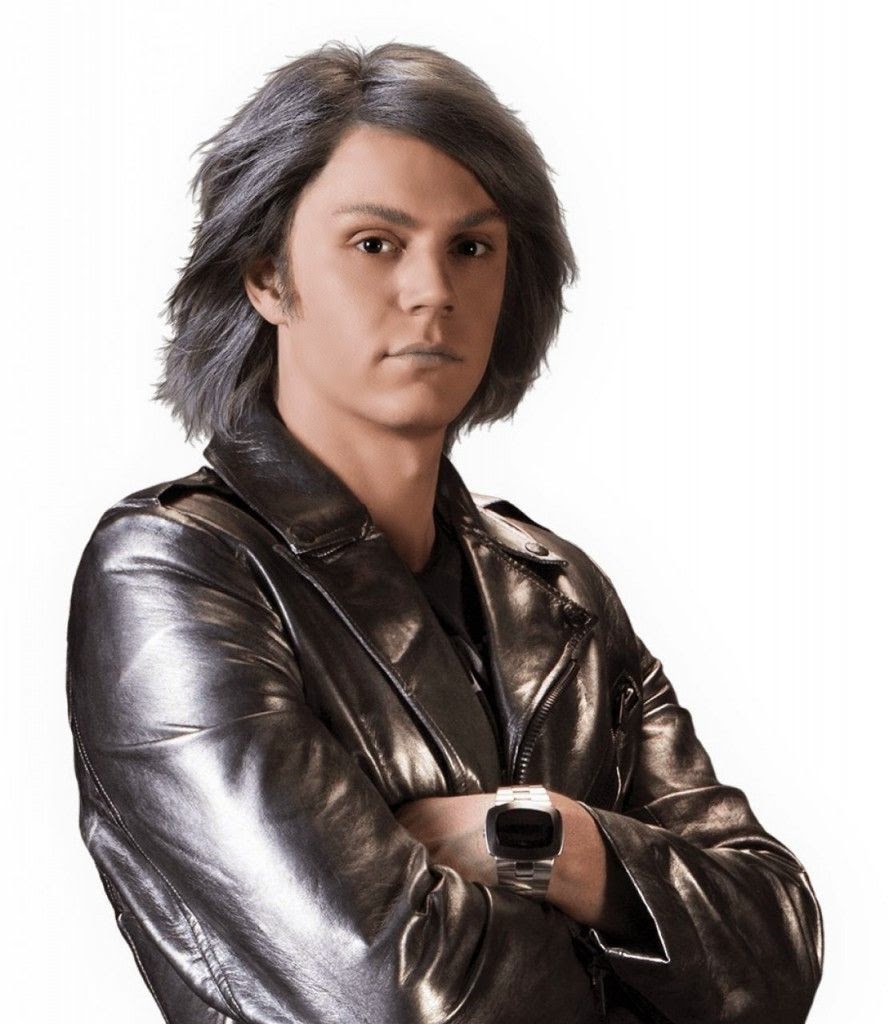 And that outfit doesn't look as stupid when it's within the context of 1973.

The film as a whole doesn't quite bring itself up to the level of First Class thanks to its reliance on generic screenwriting platitudes to drive the plot forward (there's lots of mumbo-jumbo about hope and the course of time and good vs evil and it's all been done before) and a penchant for overemphasizing certain plot points to make sure the audience gets it. But that doesn't mean that it's not an exciting and viable entry in one of the strongest (and longest-running) comic book film franchises of the century.

But before we go, a quick question. When did CGI get crappy again? We've been coasting along fine for years, but all of a sudden these last couple X-Men movies have been beholden to some truly questionable visual effects. It's not enough to take one out of the story, per se, but it's something to think about.

Let me just say that I am absolutely happy with what we got. A rad mutant power is a rad mutant power. But studios have gotta make sure they render before they export or something, because in a couple years, those plasticky-looking sentinel insides are going to get quite a laugh when viewed on Ultraviolet-restored Mega HD BluRay laser processors, or whatever the hell technology is coming down the pike.

But hey. It's X-Men. Sit back and enjoy the ride.