With the mass appeal of Friends, everybody wanted to jump on the bandwagon. A guest appearance next to the most famous sitcom "family" in the world could launch anybody's star into the atmosphere. Over its decade long history, plenty of big stars have come and gone in the purple apartment, but here are some of my favorites. 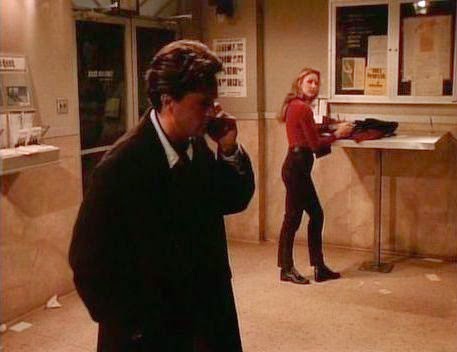 First Appearance: "The One with the Blackout" (S1:E7)

One of the few "big name" stars of the first season, Jill Goodacre got in on the fun before the world even knew how game-changing the show was eventually going to be. A model with very few acting credits to her name, she brought a friendly charisma to her cameo in one of the funniest Chandler storylines of the first season (except for Janice, of course). 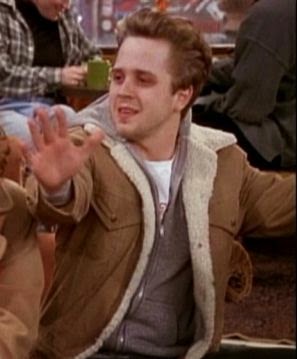 Although Giovanni Ribisi has had roles in popular movies as widely varied as Lost in Translation, Avatar, and Ted, he will always be remembered, at least by me, as Phoebe's spacey brother Frank. Ribisi's startlingly odd performance provided an edginess to the show that certainly helped to propel it through its second season into its Golden Age. 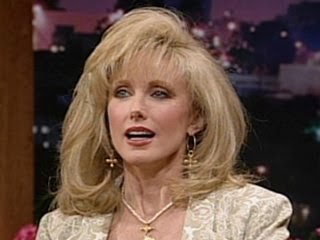 Morgan Fairchild is just plain regal is what she is. A television queen in her domain, she brings a smoky sensuality and riveting force to her character, Chandler's romance novel-writing mother. Her innate sexual power provides a hilarious antithesis to her son's gawky fumbling and self doubt. 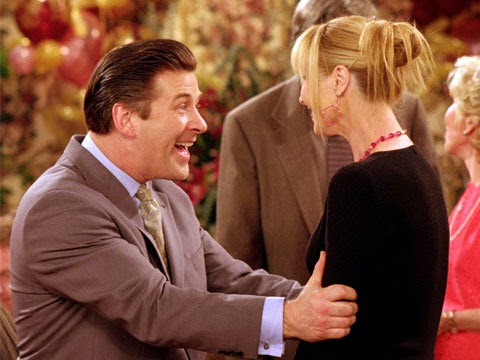 People were surprised when Alec Baldwin displayed his comedy prowess by starring in the class A sitcom 30 Rock, but they really shouldn't have been. Not when he proved it so extensively in season eight as Parker, Phoebe's endlessly enthusiastic and bubbly boyfriend. Some guest stars were just that - celebrities showing up on the show to play around. But by his second and final episode Alec Baldwin found himself fitting into the show's sharp comedy style like a glove. 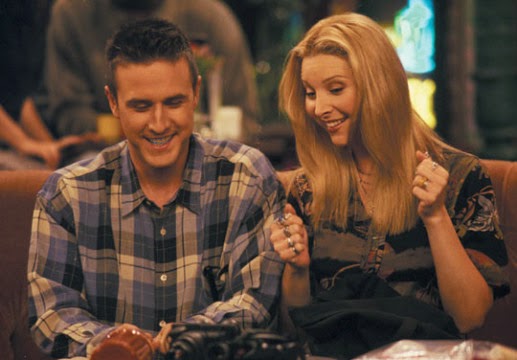 I have a perhaps unhealthy obsession with David Arquette. But don't let the fact that I own a framed picture of him and keep it on my bedside table distract you from his amusing cameo as a stalker who mistakes Phoebe for her twin sister Ursula. Despite his relationship with co-star Courteney Cox, he has a goofy chemistry with Lisa Kudrow that keeps the episode fresh and light, keeping the comedy at the forefront in what could have been an unintentionally dark subplot. 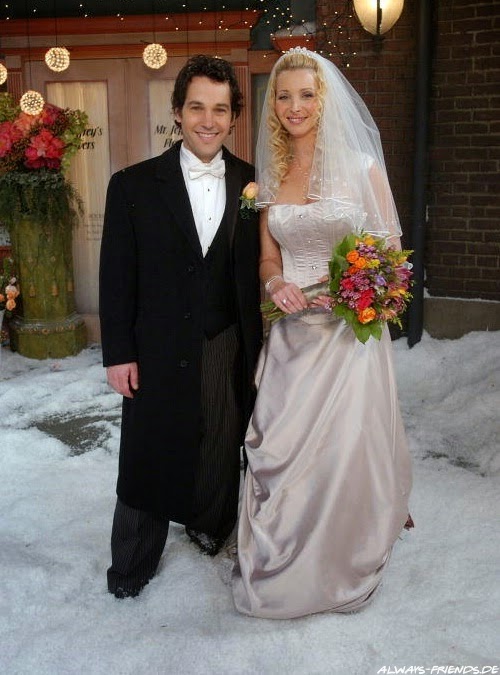 Who doesn't love Paul Rudd? Phoebe Buffay certainly does and she married him to prove it! Although he was introduced late in the show, Rudd's character Mike is so endearing that by the end of the show he feels like part of the gang, a Herculean feat considering what a pop culture titan Friends had become by the end of its run. 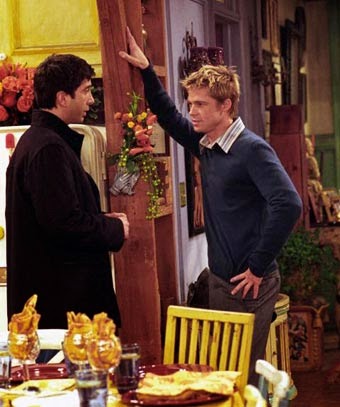 First Appearance: "The One with the Rumor" (S8:E9)

Although in retrospect it's a little bleak, the then-married Brad Pitt and Jennifer Aniston had a lot of fun as he played Will Colbert, an ex-fat high school classmate of Rachel's who hated her guts. Although their contentious split made her a tabloid superstar, it does somewhat diminish the humor although it's still a great inside joke in context. 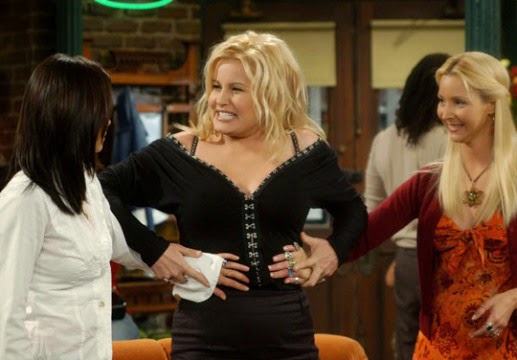 Jennifer Coolidge has the Midas touch for comedy, turning everything she's in to gold. Not that Friends needed it, but her one episode stint as Amanda, an egocentric old roommate of Phoebe and Monica's who has developed a hilariously fake British accent. Seeing her dance with wild abandon is worth every cent it takes to buy a TV to watch it on. 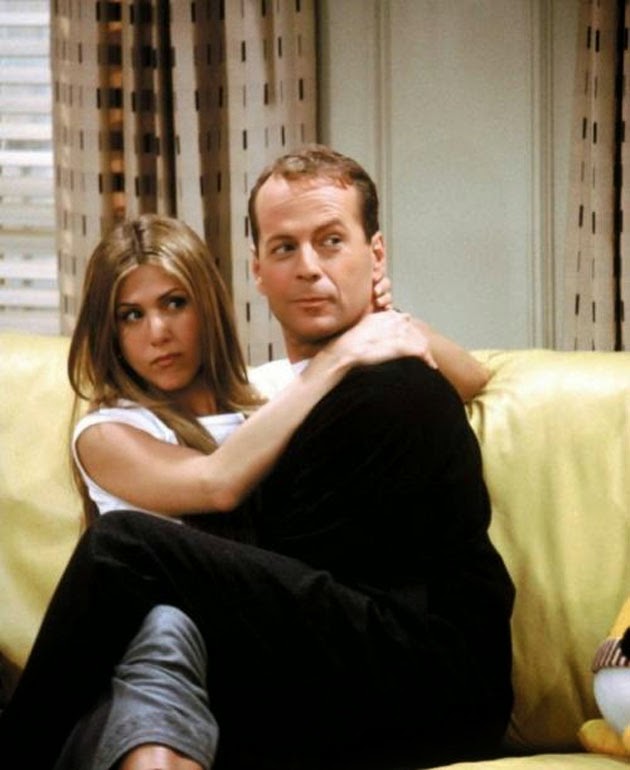 Bruce Willis actually appeared on the show for free because he lost a bet to Matthew Perry on the set of The Whole Nine Yards. If that's not the most awesome story you've ever heard, I envy your life. His stint as the manly father of the student Ross is dating is one of his best comedy roles as he reveals his emotionally stunted inner self. Paul's the man! 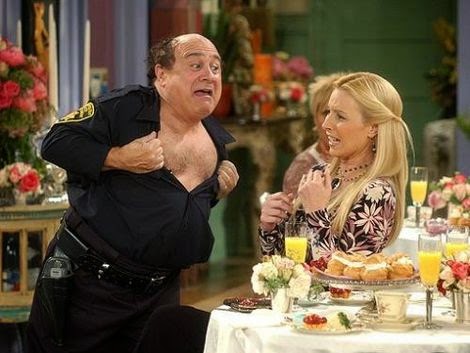 First Appearance: "The One Where the Stripper Cries" (S10:E11)

If there ever was a role Danny DeVito was born for, it's... Well, it's Frank Reynolds in It's Always Sunny in Philadelphia. But his role as Phoebe's bachelor party stripper is a close second. Please, invite him to all my future events.
Word Count: 916
Also sprach Brennan at 8:49 AM