Census Bloodbath: Dash Away, All 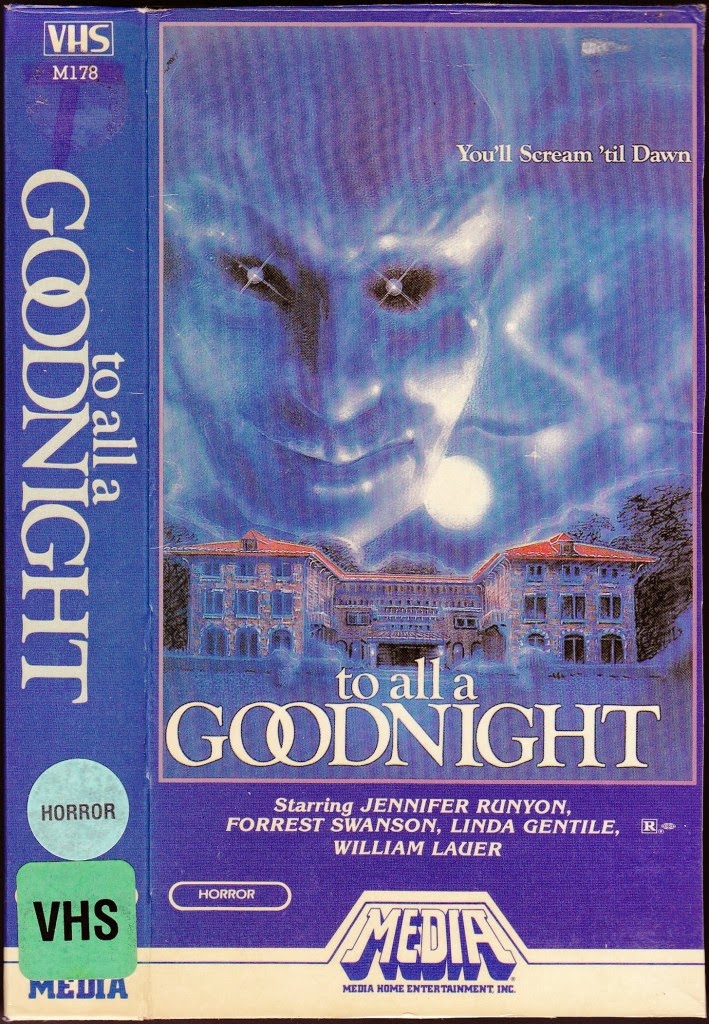 Holiday themed slasher films are always a huge draw. Centering the murders around a single unifying element helps the filmmakers find some great puns and kills that otherwise couldn't have existed. I'm just saying, nobody is gonna get their head shoved into a turkey or an American flag down their throat on a campground in the middle of August.

Christmas is a particular favorite because of the innocence and joy usually associated with the holiday. And nobody can resist the idea of a killer Santa. I mean, the man is omniscient. He sees you when you're sleeping. He sneaks into your house in the middle of the night. And he knows when you've been bad. The whole thing is pretty creepy without the help of a carving knife and minor key synth music.

Because of the sheer profusion of films of this stock, I hold an annual Christmas Slasher Movie Marathon at my house in the winter. We've seen gems like Psycho Santa, Satan Claus, Silent Night, Deadly Night and way way more. So when I began Census Bloodbath way back when last summer, I decided to skip over To All A Goodnight at first because I wanted to save it to watch with my friends during the holidays. I'm really glad I didn't.

Because they would have killed me for showing them another crappy-ass Christmas film just because the title sounded promising. 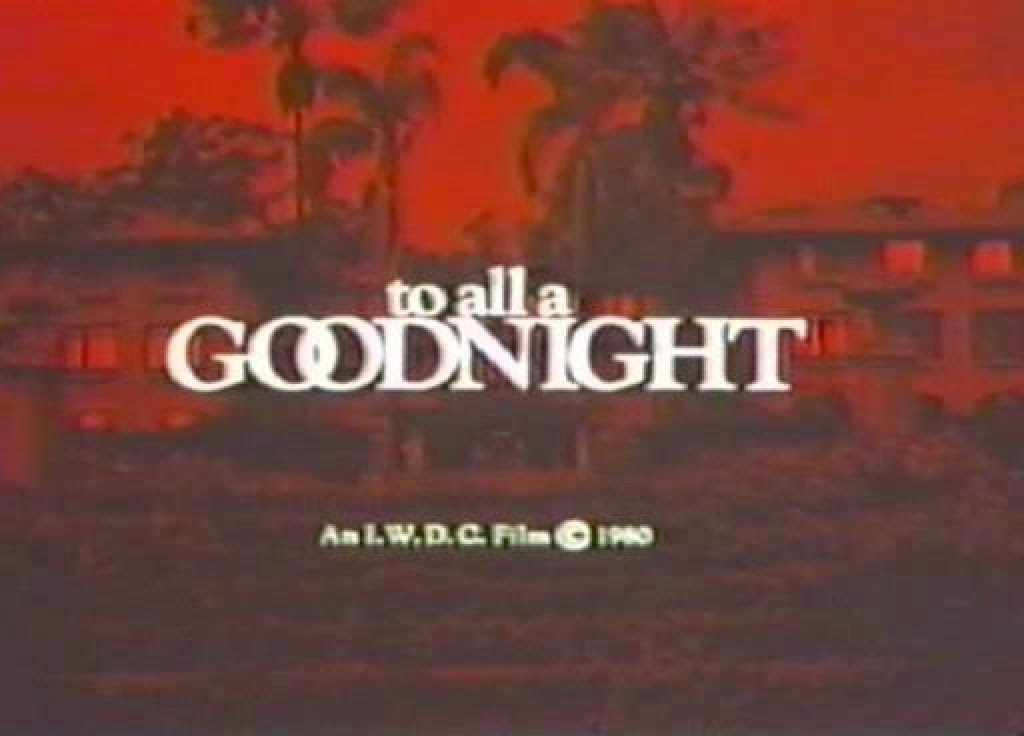 The film opens two years ago at the Calvin Finishing School For Girls, utilizing the hoary trope of "transgression in the past" to provide a motive for the murders, this time the accidental killing of a sorority sister (Maybe. It's never made explicitly clear that this is a sorority, but they look and act like one and the DNA of Black Christmas is too apparent to avoid drawing connections.) during a prank. This entire scene is alarmingly perfunctory, only lasting less than a minute.

It's astoundingly odd that this should be the case. A lot of later slasher films spent only a brief amount of time on this kind of thing, because they knew that audiences had already picked up on the patterns from watching so many similar movies and it was only necessary to provide a sort of summary of the transgression. The audience could do the rest of the heavy lifting.

But To All A Goodnight (I hate the grammar of that title more and more every time I type it) was the first slasher film of 1980, certainly too early in the game to be participating in any sort of self-assured truncation like that. Perhaps its just an indicator of the ubiquitous poor quality of the film, shepherded to ever more rancid degrees by director David Hess aka the rapist in The Last House on the Left, and quite obviously not a huge proponent of good taste. 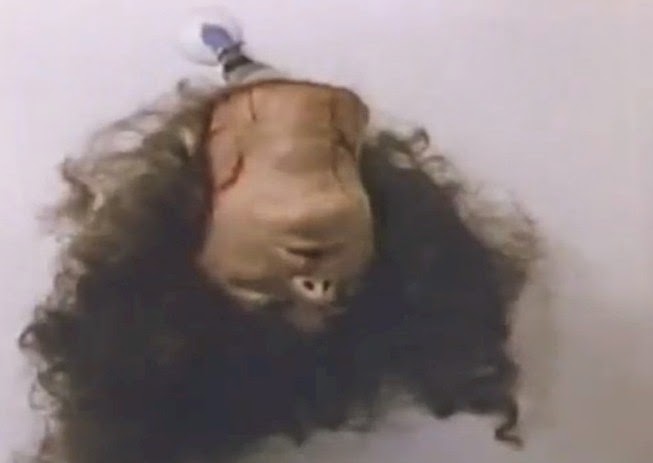 So here we are in present day. It's Christmas break and many of the girls have decided to stick around. The most prominent character is Nancy (Jennifer Runyon), a meek, mild, quiet, demure, snoozefest of a human being with a voice that hardly raises above a squeak. She is the Final Girliest Final Girl to ever exist, and not the last to bear that name. She's the only one who objects when the other girls decide to slip sleeping pills to their housekeeper, Mrs. Jensen (Katherine Harrington) and hold a party while she's sedated.

Cynthia's boyfriend is Paul (mysteriously, there is no actor listed under this name), who gets about three seconds of screentime before he is summarily dispatched; Trisha's boyfriend is T.J. (William Lauer), a lunkish jock and ringleader of the boys; Melody has grown attached to Alex (Forrest Swanson), a nerdy kid who is inexplicably obsessed with medical technology and is rather fond of Nancy despite the fact that a wet mop would be more fun to hang out with than Nancy; also there's assorted men and women who blend together too much for my poor fevered brain to focus.

Not a single one of these actors has ever been in anything else even remotely interesting for their entire careers (except, oddly enough, for the fact that several of them appeared in episodes of Diff'rent Strokes). In fact, a large portion of them would never act again. I hope they all had day jobs, because it's easy to see why they wouldn't be hired back. Every bit of dialogue plays off like they're fumbling to read off of cue cards printed in off-white ink on white paper. 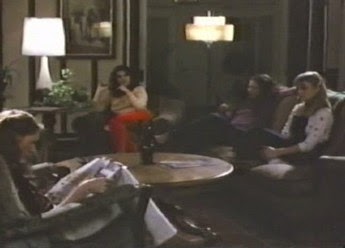 The partiers proceed to drink and screw and die and wake up and screw some more and die. In between all the boning, they are bumped off one by one by a homicidal maniac in a Santa suit. This is less interesting than it sounds, because absolutely nothing clever is done with the conceit. If it's Christmas and you're a slasher movie, at the very least I expect somebody to be strangled with tinsel. But no, our Saint Nick with his belly like a bowlful of helly makes do with a garden variety kitchen knife.

So, about the sex. I'm all for sleaze in my exploitation movies (in more of a hilarious historical interest way, not a lecherous one), but the entire film is essentially one long, ill-lit sex scene. It's like the seventh circle of hell with randy co-eds doffing their tops into eternity.  It's so relentlessly sleazy that it's boring, squandering its shock value and losing any ability to titillate,  merely becoming an incessant grinding gear of agony for everybody but the most perverse, tormented shadows of human beings. Also, the music rips off Jaws. 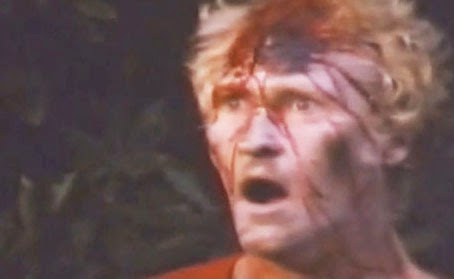 I wish the rest of the movie had ripped off Jaws. It would have been far more interesting.

The kills are uninspired and either to dark to be discernible or framed too far from the camera to have any sort of power. The only captivating moments of the scarcely 80 minute film are in the final scene, and that's only because that's the moment when the film shifts from being a tedious grind to powerfully strange.

I'm going to throw in a SPOILERS tag here just out of courtesy, but please read on. I actively desire to spoil the ending, hopefully preventing any bad movie buffs with piqued interest from becoming yet another of the film's victims.

So, it turns out that the killer is Mrs. Jensen, who was apparently the mother of the girl who was killed two years ago. So that's interesting. Female killers always give me a thrill, even though the genre is still too misogynistic to allow them to be anything but hysteria-driven monsters. And the fact that her nature and motive predicted Mrs. Voorhees in Friday the 13th is quite intriguing.

But we haven't even gotten to the strange part. This is all presented very plainly and the killer is shoved unceremoniously off a balcony with little effort on Nancy's part. The editing starts to get a little wacky here, and the movie loses its grip over what time of day it is and/or whether we're in a flashback and/or whether she fell off a balcony onto the lawn or into the living room. Just to spice up this little bit of manic editing dross, another Santa steps in, revealing himself to be the police inspector/husband of the killer!

And he attacks! And! ...is subsequently killed without a moment's hesitation.

Why introduce two killers in your final five minutes, only to have them both amount to nothing? Who actually killed all those teens at the party? Were they working together? Or was it just Mrs. Jensen and her husband stepped in to avenge her death? Why are they both dressed as Santa? It's not like the holiday played any big part in the film, except for some twinkle lights in the set design and sleigh bells on the soundtrack (which is ear-splittingly awful, by the way).

By now I have grown accustomed to nonsensical slasher endings, having been inoculated by watching the entire Friday the 13th franchise twice over, but what in Sam Hill is this movie even about?

You know what? It doesn't matter. I watched the entire thing, so I'll never have to sit through it again or waste another second of my time thinking about it. And neither should you. Don't watch this movie. There are a few scattered fun 80's moments, but they're just not worth all the digging it takes to reach them. 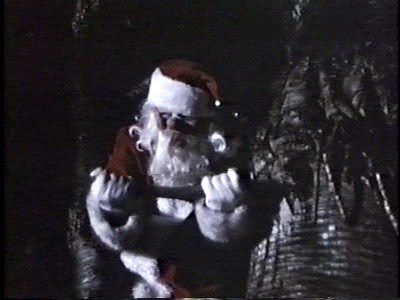 Tragically, this isn't the last disappointing Santa movie that will be featured on Census Bloodbath. Steel your loins.

Killer: You tell me. I'm just gonna split the difference and say Santa.
Final Girl: Nancy (Jennifer Runyon)
Best Kill: Santa kills two escaping partiers with an airplane propeller in a scene that has nothing to do with the rest of the movie.
Sign of the Times: The awkward moaning that ensues during simple acts like kissing is a uniquely 80's phenomenon.
Scariest Moment: The creepy groundskeeper and obvious red herring Ralph takes an odd liking to Nancy, crawling into her window and demanding that she pray for forgiveness.
Weirdest Moment: Leah does pirouettes with a cheese platter in a pre-coital moment.
Champion Dialogue: "I was just on my way to drink some milk."
Body Count: There seems to be some contention around this, but I feel comfortable sticking with around 15; including the 2(?) killers and their daughter. Also, I apologize for the lack of names in the body count but I just couldn't bring myself to rewatch the film to make sure I got them all right, even just skimming it.

TL;DR: To All A Goodnight is a worthless, sleazy trifle of a slasher film that wastes what should at the very least be a corny and entertaining premise.
Rating: 2/10
Word Count: 1852
Also sprach Brennan at 11:24 AM