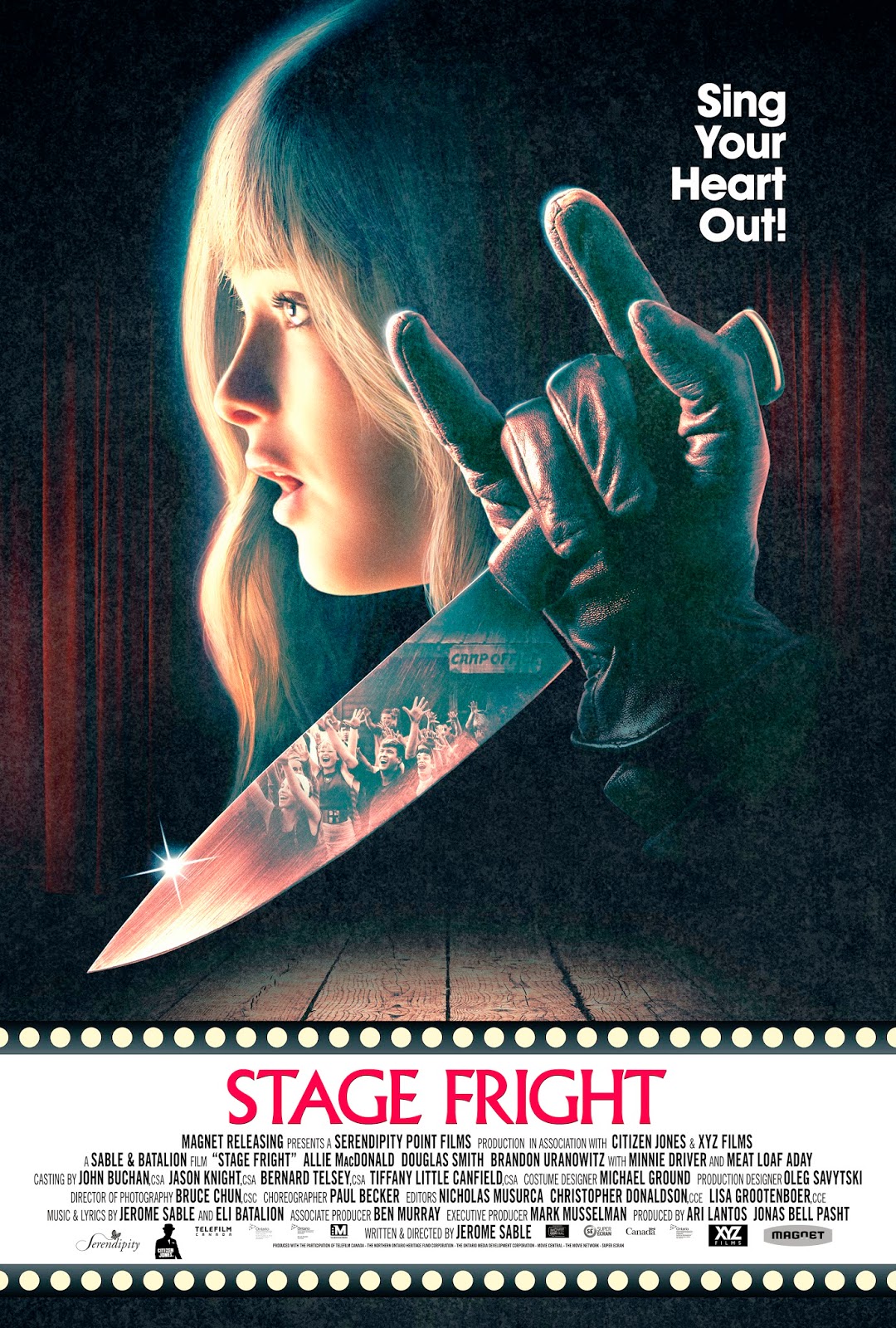 Much like happy families, modern slashers are all alike. And, oddly enough, the non-postmodern ones are pretty much like the rest of the 80's crap, only without the rough-and-tumble spark of that decade. These slick and anonymous films come crawling out of the woodwork with their classically-inspired poster designs and killer pun-intended ad campaigns, promising to bring a wave of cheesy nostalgia but instead crumpling under the pressure long before the Final Girl begins her inevitable face-off with another one of a crop of indistinguishable killers.

Stage Fright is perhaps even worse than these because it brings along another promise. You see, this Canadian splatter flick is a musical. Because I apparently haven't learned my lesson after the disastrously limp acoustic rock of 2010's Don't Go in the Woods, I was pretty excited to sink my teeth into it.

Little did I know what my poor teeth were in for.

Stage Fright tells the tale of one Camilla Swanson (Allie MacDonald), the daughter of a great actress (Minnie Driver) who was murdered on the opening night of a new musical, the halfheartedly copyright-coded Haunting of the Opera. That title only gets more annoying as the film goes along. Cut to ten years later where Camilla and her twin brother Buddy (Douglas Smith) are working in the kitchen of their adoptive father, Roger(Meat Loaf)'s theatre camp, Center Stage.

Thus begins the first of Stage Fright's lukewarm musical numbers as the arriving campers sing their praises about being able to finally return to the one place where they can be their true selves with no fear of rejection. It's choreographed amusingly enough but the large segment of the song dedicated to gay people as written by somebody who has clearly never met one is an early indicator of the questionable sexual politics that pervade the film like ants in a box of raisins.

When Roger announces that this year's musical is going to be a revival of the very play that her mother died performing, Camilla finds her true calling and auditions although you'd think she would want to avoid incurring the wrath of one of the many slasher villains with sharp knives and impeccable senses of irony. Unfortunately, this happens. 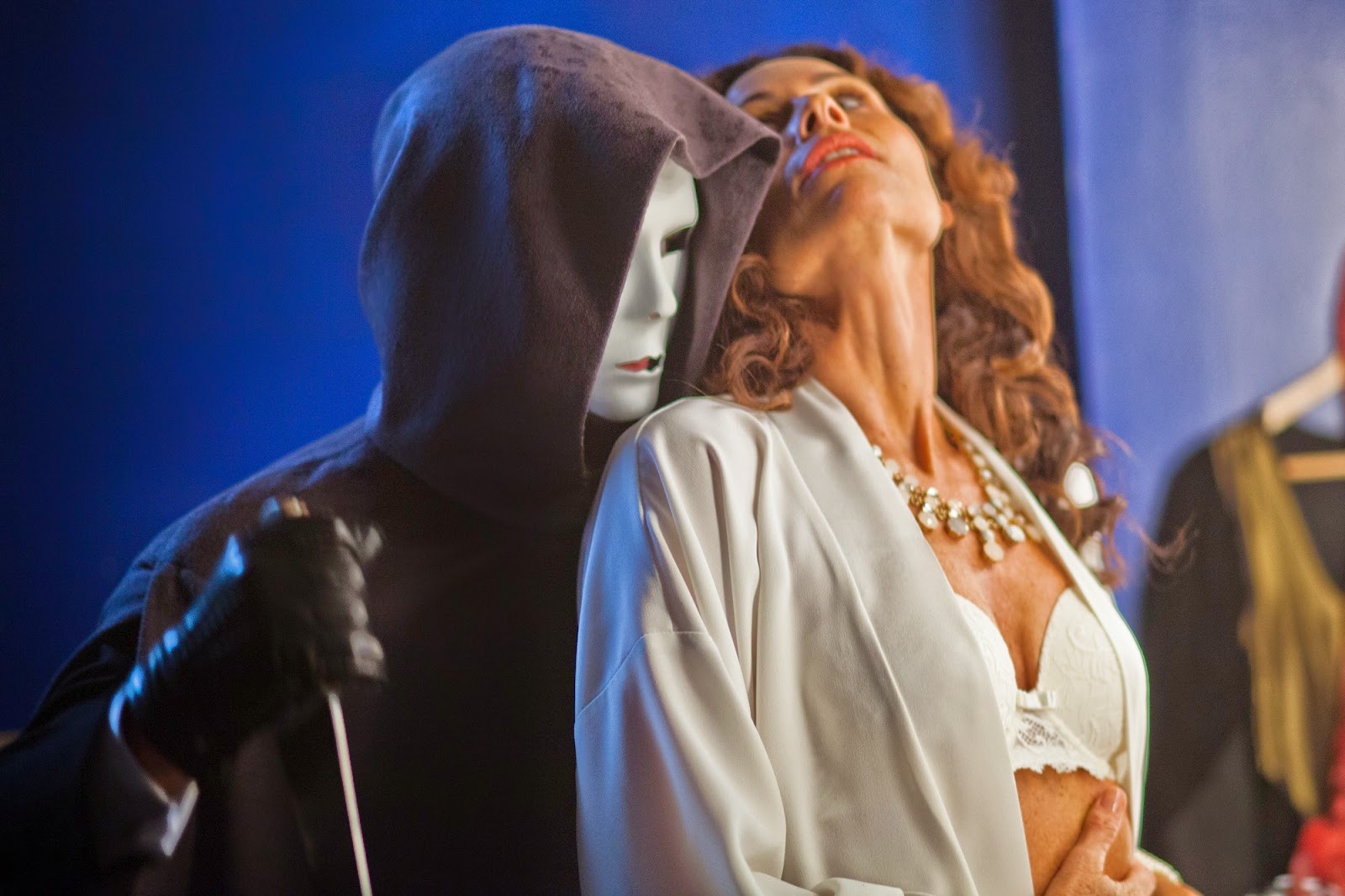 Perhaps fortunately. Things were getting slow.

This ends up having no real relevance on the plot except for setting up one of the approximately 800 red herring suspects for the slew of murders that inevitably occurs on opening night. No, wait. I lied. There is one other purpose and that is making the viewers extremely uncomfortable with its vilifying of sexuality, something I thought we had quite outgrown in slasher films after Neve Campbell got her rocks off with Skeet in 1996.

Anyway, the cast of the play starts getting bumped off one by one by a killer in a kabuki mask who wails puns in a hair metal voice and stays onscreen for as little time as possible to make room for the maximum capacity of tepid musical numbers. All the while he spouts off reprehensible puns stolen wholesale from the Nightmare on Elm Street movies, and not even the good ones.

It's shrill, it's nonsensical, and although the deaths are bloody there are not nearly enough of them to counterbalance the sheer surfeit of fun. In fact, for a summer camp flick, there's surprisingly little camp value to be found in Stage Fright, unless you count Douglas Smith's deranged performance in which he relies on vibrating his skull at increasingly rapid speeds in lieu of actually acting out motions and speaks like he just got home from getting his wisdom teeth removed. 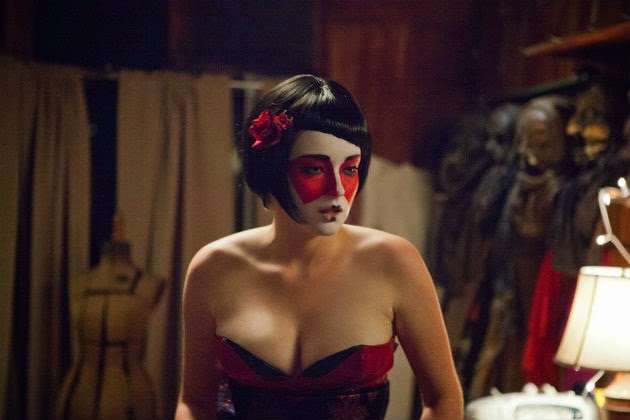 It's impressive that he managed to be the worst performer in a film that is essentially a kabuki fever dream.

The final reveal of the killer is simultaneously predictable and illogical, but I shan't cover that because I want to avoid spoilers and I actively don't care. At any rate, the more important aspect is the gore, which is perhaps more brazen than some of the more sanitized PG-13 slashers we saw in the late 2000's, but save for an impressive early scene, really isn't enough to wet my bloody whistle.

The killer shrieks every line with unmodulated venom like an Iron Maiden imitator in an American Idol audition montage and the entire film follows suit, loudly proclaiming its mediocrity and shoving it down your throat with every chance it gets, wasting the goodwill procured by the first couple scenes.

The backstage drama of the first half is minimally exciting, but the shallow horror of the second drives it straight into the ground, capping it all off with a truly pointless final scene that serves as an emphasis for how irrelevant the entire movie proved to be in the long run.

Oh well. At least people keep making slasher movies. That means that eventually a good one should come around, right? A million monkeys on a million typewriters...

Body Count: 7; including the killer but not including a severed head found in a dumpster because the mold was so poorly done it was next to impossible to figure out who it belonged to.
TL;DR: Stage Fright is obnoxious and stupid, wasting the premise of a slasher musical.
Rating: 4/10
Word Count: 954
Also sprach Brennan at 10:02 AM