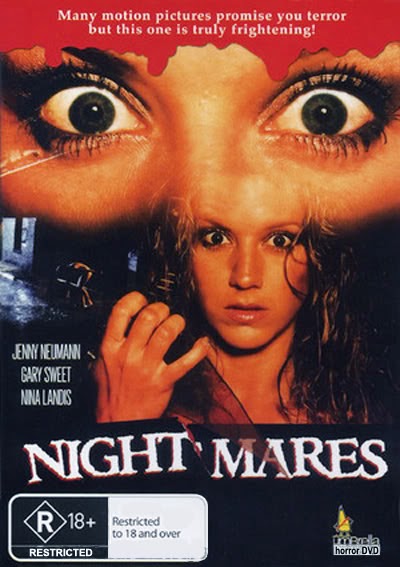 Though I haven't written as many entries into my Census Bloodbath feature as I'd hoped when I started it, I'm really trying to buckle down over summer break before school leaps up from behind me and pulls me back into the water à la Jason in the end of Friday the 13th. But with Nightmares aka Stage Fright forming my 30th entry in the long-running series and almost completely rounding out my coverage of the year 1980, I'm feeling pretty good about things.

It helps that Nightmares is closer to the tried-and-true method of slasher filmmaking than many of its brethren in the first year of the decade. As much as I enjoy the thematically intriguing, morally dubious Psycho riffs, they just can't compare to the down and dirty "boobs 'n guts" trashiness that makes the genre such a cheesy draw. It also helps that Nightmares marks the first Ozploitation film of the bunch. The Australian accents help ease the pain of how utterly dreadful the film actually is.

Slashers do have to be graded on a curve, because a lot of the fun comes from how cheesy and shoddily made they are. And Nightmares is certainly a lot of fun when it's not being ploddingly dull. There's ample flesh, both male and female (a staple of any solid exploitation flick) and plenty of people getting stabby stabbed.

The relentless filler, dubious character motivations, and uncreative weapon choice do put a damper on things in terms of quality, but sometimes it's quite nice to relax into the rhythms of an insipid genre piece and just let it take you on a ride.

The film opens on January 26th, 1963. A young girl catches her mother in the act. The film immediately cuts to February 23rd, 1963, because it apparently forgot when the actual plot was supposed to take place. The young girl is put in the back of a car to nap while her mother gets busy in the driver's seat. An ill-timed awakening leads to a car crash and a lifetime of sexual hangups.

Cut to present day and young Helen Selleck (the lovely Jenny Nuemann, who would appear in Hell Night a year later) as she prepares to audition for a local play. She meets the handsome Terry (Gary Sweet), an ex-soap opera star who is instantly enamored of her. She feels quite the same way, although she turns down his lunch invitation because of her SEXUAL HANGUPS!!! !!! !! !

Was that quite clear enough? If not, the ceaseless cutaways to Helen's mother and her lover doing the nasty will jog your memory. 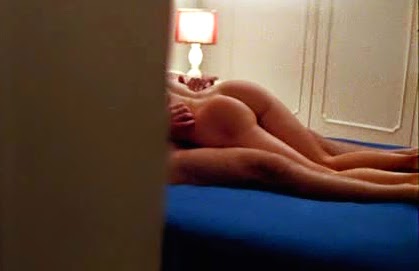 She hates sex more than Mrs. Voorhees, which is something I never thought I'd say.

She gets the part, despite her only acting technique being bugging her eyes out like a deer in front of an eighteen-wheeler. From then on, the other members of the theater company have sex or attempt to have sex before they are subsequently murdered. With some complete strangers thrown in there for good measure.

Note that there is not a fleck of a character trait in anybody but the director and the critic, played by two of the most esteemed actors on set. This would require a much more savvy knowledge of human psychology than writer Colin Eggleston could manage, especially since he was too preoccupied mishandling Helen's psychosis.

There's plenty of that old slasher standby of sex equals death, but with none of the what I shudder to call nuance of other slasher films. Helen seems to be using murderous rage to act out on her repellant sexual desires, all under the guise of Cathy, the girl she once was. But giving it a reading that straightforward is an insult to the author's original intent, because he clearly had no idea what he was doing, sending her from scene to scene without a care in the world as to internal consistency.

Except for the eyes. Always the eyes.

It's clumsy and the dialogue scenes average about ten seconds each while the POV stalking sequences can stretch as long as two or three minutes, sometimes never even showing a single human being.

The score attempts to up the atmosphere by working overtime, but there only seems to be about one musical cue that composer Brian May (no relation to Queen, although for one brief second my weary heart worried that it might be him) repeats ad nauseum.

Helen (and try as they might, the filmmakers can not hide the fact that she is the perpetrator) always kills her victims with a shard of glass but never plans ahead, so she ends up breaking a new pane for every kill. It's a miracle there was any glass left in the theater at all by the time she was done with the place.

It's a metaphor for my shattered soul, having watched this movie all the way through.

In fact, the entire film is quite startlingly bad, at times feeling like a random collection of outtakes from the cutting room floor of some other, better horror film. One memorable moment involves the killer's hand in close-up slashing down and to the left while cutting to a wide shot of the glass shard swinging down and to the right. But at 79 minutes, it's over in a flash and some of the more unique elements provide the film some historical interest for masochists like me.

First off, it's rare for every single speaking character save the killer to have shuffled off the mortal coil by the last reel, as it does here (Except, of course, for Sue (Adele Lewin), the assistant stage hand who vanishes halfway through the film with no explanation). It is also exceedingly rare for a film to have no Final Girl (even counting those who die in the last scene), as this one adamantly does not.

It perhaps shouldn't earn the distinct honor of being so aberrant from the form, but the fact remains that it was brave enough to play with what was already a hoary trope of the genre (Final Girls can be seen all the way back in 1974 with Texas Chainsaw and Black Christmas). The film that contains this impish experimentation is not a particularly memorable one, but it has enough sleaze and mindless killing to satisfy the slasher connoisseur.

Killer: Helen Selleck (Jenny Nuemann)
Final Girl: For the first time in all my years of doing this, there is nobody that even comes close to being a Final Girl. I'm just as astonished as you.
Best Kill: They're all pretty much the same, but I am partial to the one where Jenny slices a random girl's boob, causing her to cup it erotically. Slashers. Gotta love 'em.
Sign of the Times: Helen and Terry chill out in front of a Midnight Oil poster.
Scariest Moment: The nightmare that leads us from the flashback to modern day is a cluttered and stressful explosion of avant garde noises and pictures.
Weirdest Moment: Helen explodes into peals of weeping laughter during an acting exercise.
Champion Dialogue: "You are an actress's big brown freckle."
Body Count: 11; 10 by Helen's never-ending supply of glass shards, and one in a car wreck that she inadvertently caused.


TL;DR: Nightmares is not a great slasher nor a good one, but it plays with the genre enough to be of minimal interest.
Rating: 3/10
Word Count: 1427
Also sprach Brennan at 10:27 AM