Here we are again at the start of yet another promising and terrifying semester for Yours Truly. To cope with the sheer amount of work I have looming in the distance (including six consecutive 12-hour weekend shoots), what else is there to do but write reviews of crap we watched in my horror class (for which I am now TAing - the student has become the master)? And so it goes. 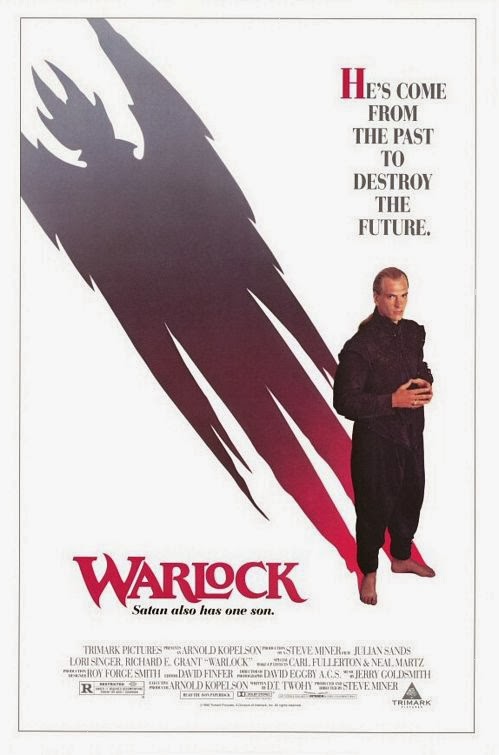 Dave Twohy, the director of the Riddick trilogy wrote the screenplay for this late 80's fantasy horror picture shortly after graduating from California State University, Long Beach. Evidently he was too lazy to return to his alma mater and talk about his early career. For that reason, there shall be no further mention of him in this blog.

I'd rather talk about Steve Miner, anyway. This man resolutely refuses to leave the hallowed halls of crap horror and has thus ended up on this blog more than any other director save Wes Craven. Although Miner is certainly less talented than Ol' W. C. (as House and Friday the 13th Part 3: 3D can attest), he is always a welcome presence around these here parts.

The plot goes like this - an evil Warlock (Julian Sands) is imprisoned in the 16th Century and the unpredictable magic he uses to procure his escape lands him smack dab in the middle of 20th Century Los Angeles - 1988 to be precise. Although perhaps we need not be so precise, considering that the girl who lives in the apartment he crash lands into looks like a cross between Run Lola Run and LeeLoo from The Fifth Element. 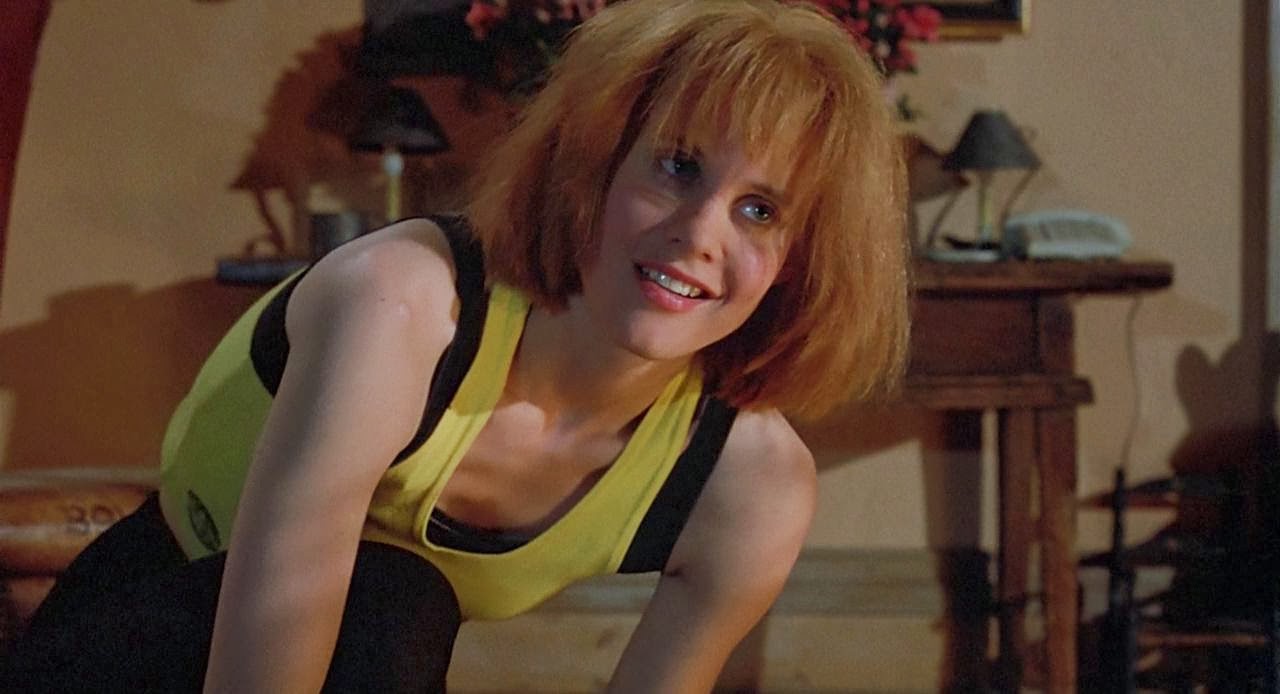 I don't normally post screencaps in mini reviews, but come on. How could I deprive the world of this?

She teams up with a 16th Century warrior (Richard E. Grant) sent to defeat the Warlock in order to lift the curse of aging he has placed on her. Also, there's a whole thing about uniting the separated thirds of an ancient tome that will reveal the true name of God, which - if uttered backwards - can undo Creation.

It's a whole thing, I won't get into it.

Original fantasy horror like this would soon be lining video store shelves in the early 90's (Leprechaun, anyone?), but Warlock is better than most. Sure, it's a hunk of cheese big enough to trap Mickey Mouse, but it's such a loveably batty and low rent thriller that it never fails to charm.

And for once in this kind of film the comic relief consistently lands, making up greatly for the tepid horror (which falls flat in spite of some frankly terrific original ideas). In fact, it can hardly be distinguished as a horror film what with the brightly lit setpieces and largely inconspicuous music. Only one scene can be counted as truly horrific, but it's a doozy - genre veteran Mary Woronov is possessed by some sort of orgasm devil and it is grand and melodramatic in the best way.

All in all, it made me excited to watch more crappy DTV horror, which is always a good(ish) time for me.

One last thing before we go: Apparently God's true name is Rakisha, which seems a little ghetto for an omnipotent deity but you won't catch me complaining. 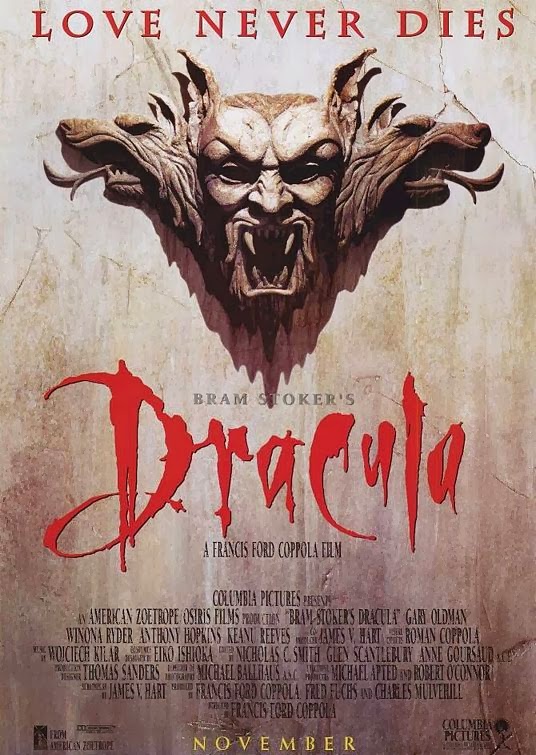 Why oh why does this kind of thing keep happening? The Dracula story is over and done, simple as that. The story is centered around a real estate agent and hops back and forth between Britain and Transylvania so many times that the characters spend more time traveling that actually doing anything. All the sex in the world couldn't spice that narrative up.

Sorry, I've been sitting on that one for a while now.

At least Francis Ford Coppola's retread of the classic work has a daring visual aesthetic that challenges and creates a thoroughly moody and lovely horror backdrop. Unfortunately I am not the type of film major that can be won over with visuals alone, practical effects or not (and yes, this film displays a truly impressive amount of in-camera effects - in fact, all visual effects but a screechingly obviously fake blue flame were done the old fashioned way and it's a major credit to Coppola that he stuck through such an arduous task around the beginning of the mainstream acceptance of computer generated imaging).

So yes. Visuals. And effects. Yay. And an immense theatricality which would be welcome in a movie with literally any other cast. Gary Oldman fares well as the aged and decrepit Count Dracula, but mysteriously falls flat as the handsome young swain he becomes. Winona Ryder fumbles hopelessly at the role of Mina and Keanu Reeves just plain never was going to work, was he?

Although he is perhaps the only actor alive at the time who could convincingly portray just how unfathomably stupid the character of Jonathan Harker really is.

It really doesn't help that Van Helsing was played by Anthony Hopkins in one of the first of his many subpar post-Silence of the Lambs roles. If every Van Helsing scene in the film was cut, it would still make just as much sense. And it would still be too long.

In a just world, Coppola's vision of a bloody, sexy, colorful, melodramatic Dracula would have been a smash success, but so many of the pieces fail to fall into place that the film is stuffy by the first minute and dull by the halfway point. A swing and a miss.

Interview with the Vampire 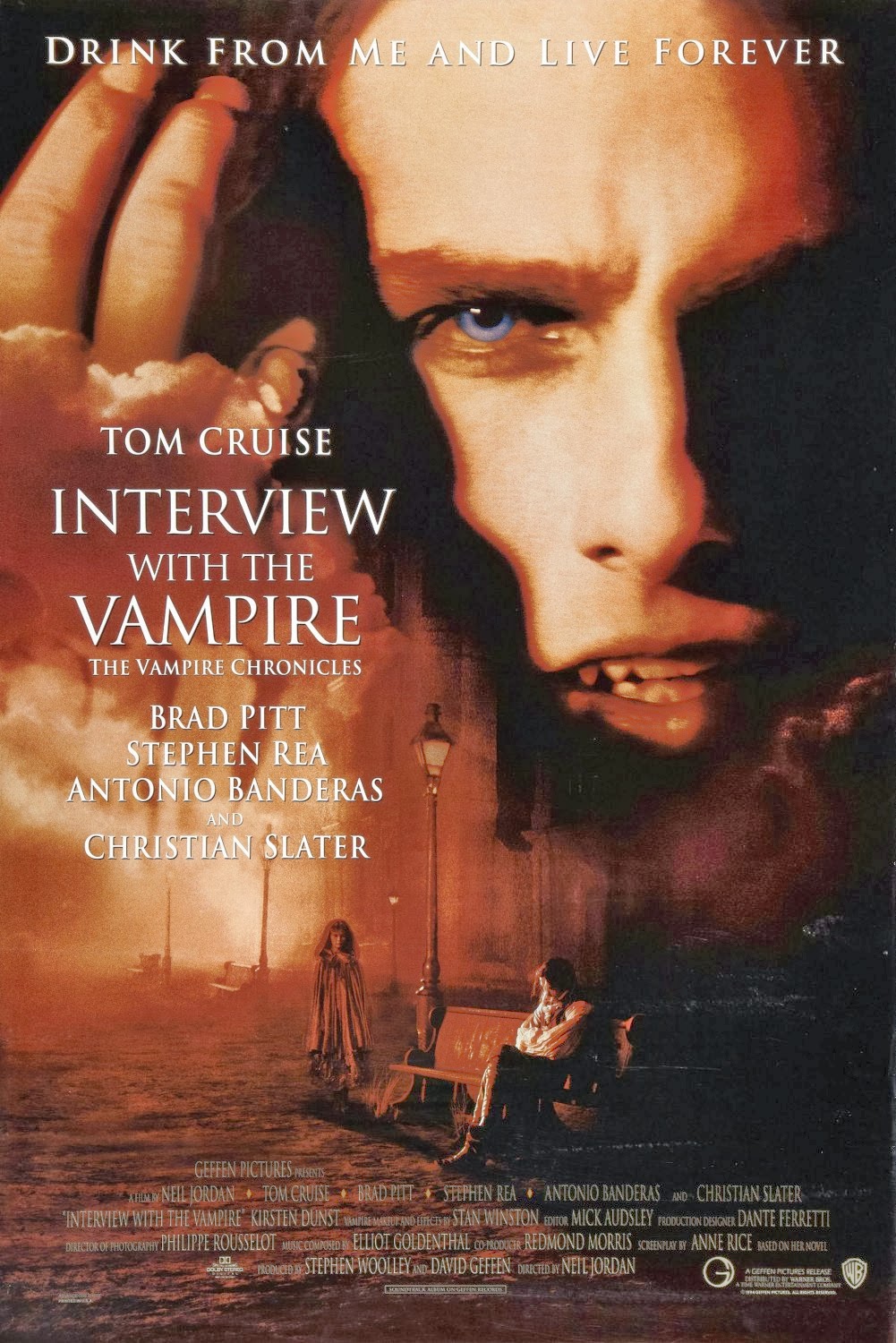 I watched this film for the first time in class on Monday. It's really quite interesting to see how many plot and character elements were lifted wholesale from this film and the novel it's based on to piece together the literary wreckage that is the Twilight franchise. But enough of that. It's uncouth to kick a franchise when it's down, no matter how repugnant or obnoxious it may be.

The most important takeaway from this film is that Kirsten Dunst is a BABY. Here I was obliviously expecting her to be a love interest, not having noticed the year on the back of the DVD case. But no. She may as well be a fetus. It's insane.

Interview with the Vampire tells the story of one Louis de Pointe du Lac (Brad Pitt), a grieving American colonist who succumbs to the curse of vampirism as offered by the fiery Lestat de Lioncourt (Tom Cruise). Louis struggles to accept his newfound thirst for sexy sexy blood and manages to avoid killing actual humans for a while, but finds that his Cullen-ness doesn't pay off in the long run.

Also Tom Cruise and Brad Pitt's hair colors are switched for this film and it trips me out something fierce.

The two enter a loving partnership long-term companionship that leads them across America and eventually to the creation of a vampire child, Claudia (Kirsten Dunst). Basically the first act is Dracula and the second act is a vampire version of The Kids Are All Right.

And the third act is Harry Potter Book Five, all angsty and brooding.

I'm really avoiding intense analysis of the film because it is a towering obelisk of pop romantic filmmaking. Interesting and pretty to look at, but lacking the depth that (possibly? I wouldn't know) might be contained in the books.

It's largely entertaining for what it is, although it does drag in it's second hour. Man, do I loathe second hours.

And I might just have to create a new custom tag for my blog posts - "homoerotic vampire movies" - because this is the most recent in a string of many, starting with The Lost Boys. Remember how the brothers in that film couldn't talk without staring into each others' eyes with the intensity of a thousand suns? Well Brad Pitt speaks directly into Antonio Banderas' mouth.