Happy Super Bowl, everybody! Although it would be uncouth of me to reveal my psychic powers on such an important day in sporting history, your jaw is gonna drop when the Seahawks win and you realize you read it here first.

For those of you (like me) who are merely impartial commercial observers who couldn't care less what the outcome of the game is, here's a couple mini reviews to help you pass the time. 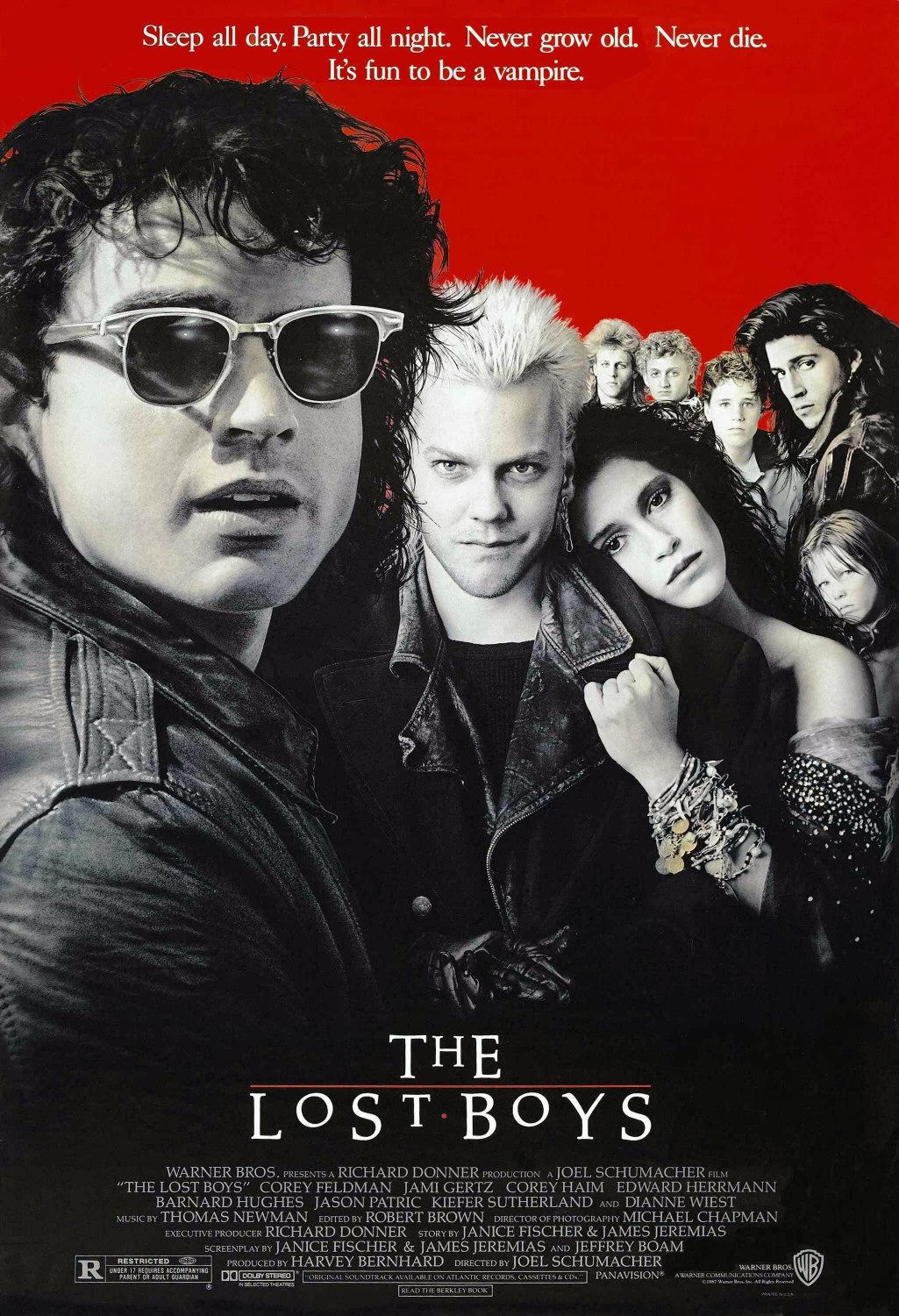 The Lost Boys is less successful as a vampire film than a snapshot of the excessively fabulous, mildly homoerotic, glittery electronic culture and fashion of 1987. Directed by Joel Schumacher of Bat Nipples fame, who could expect anything different?

Brothers Michael (Jason Patric) and Sam (Corey Haim) have just moved into the seaside city of Santa Carla (played with great distinction by Santa Cruz) with their mother (Dianne Wiest). Michael falls in with a biker punk crowd led by David (Kiefer Sutherland) and it's a legitimately tough question as to which aspect of his personality is more terrifying - the fact that he's an undead creature with a thirst for human blood or his bleached blonde mullet.

Because Michael is a dude who doesn't even unpack his suitcase before he starts lifting weights (As a matter of fact he doesn't even go upstairs. He just walks in and starts pumping iron in the living room.), he is irresistibly drawn to this buff and charismatic leader. Ostensibly he wants to join the group due to his attraction to Star (Jami Gertz), the sole female member, but it's quite obvious that he can't resist a man with a mane.

Also the tossed off love scene between Michael and Star reeks of post-production reshoots to give the character even a tiny glimmer of heteronormativity. This is a boy who drinks some of another man's bodily fluid (blood, you sicko) and becomes an uncontrollable thirst monster as evidenced by his newly pierced ear and leather jacket.

And though there is a plot in there somewhere, it mostly takes the backseat in favor of a sparkly explosion of 80's signifiers. With most horror films of this decade, there are some laughable pop culture moments or outfits, but The Lost Boys is literally comprised of them. We're talking Dynasty and Flying Nun references. We're talking Rob Lowe posters in a young boy's bedroom. We're talking a pre-insane Corey Feldman playing a young vampire hunter. We're talking a soundtrack that sounds like Cyndi Lauper after eating a bad burrito.

We're talking severe homoerotic tension between literally every single set of actors, even the ones who play brothers. Michael and Sam can only talk with their faces two inches apart, practically shouting into each other's mouths.

I rate it lower because the vampire action is lacking somewhat (although anyone who has seen the film's finale might beg to differ), but as a campy 1987 time capsule of the absurd, this film is number one. 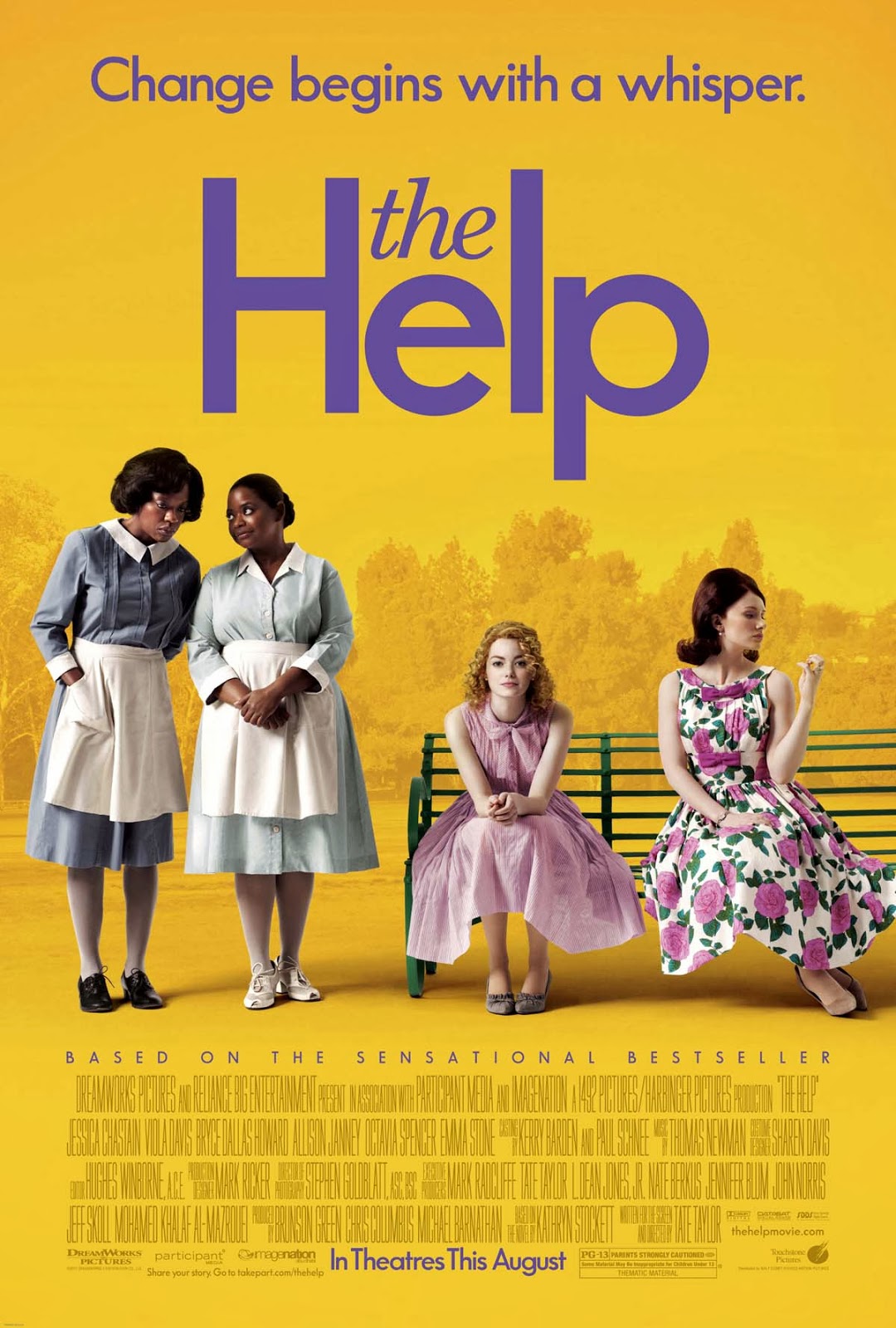 As much as I may resist it, I have to thank Sergio for making me watch Powerful Drama films. Without him, I'd certainly never have seen August: Osage County, Lee Daniels' The Butler, Mildred Pierce, and countless other esteemed pictures. I also thank him for his infinite patience when I turn into a whiny six-year-old after being forced to sit through a movie for longer than 100 minutes.

And although I don't have much to add to the discussion about the already three-year old period drama film The Help, I did enjoy it for what it was. Also I enjoyed riding down the sloped aisle of the classroom on my roll chair. Seriously though. I may get restless by the two-hour mark but the film wasn't a waste of time.

Emma Stone plays Skeeter, a young journalist who was raised by a black nanny during the time of segregation. As racial tensions begin to rise, she goes behind the backs of her hoity toity friends and interviews their maids (Viola Davis and Octavia Spencer) to get true life testimonials for the book she's writing. You get a shiny nickel if you can guess the name of that book.

Although The Help can't escape a lot of the pitfalls of the genre (White People Solve Racism, the Wise Old Black Character, an undeservedly bloated run time), it makes up for it where it counts. Bryce Dallas Howard shines in an enormously nuanced performance as a being of pure domestic evil, Davis and Spencer pick up most of the weight with their capable hands, the romantic B-plot about pretty white people is shunted to one side (exactly where it should be in a movie with this subject matter), and also Jessica Chastain owning a role that almost went to Katy Perry.

Although I would have loved to see that movie, this casting impacts the film undoubtedly for the better. For an Important film, it's never as dull as its brethren, but the story it tells is a thematically unraveled bastardization of what I hear is a vastly superior novel so as such it gets less points than perhaps it should have.