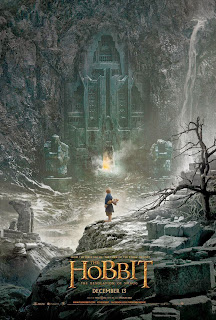 I'm not exactly the world's biggest Lord of the Rings fan, and even the biggest LotR fan isn't the biggest Hobbit fan, so the only way I could bring myself to care about The Hobbit: The Desolation of Smaug, the second film in this largely unnecessary trilogy, was by seeing it in 48 frames per second.

The high frame rate that Peter Jackson has been using to justify the existence of these three movies is a largely experimental technique of filmmaking. When I reviewed the first film, I commented on how exhibiting a film at 48 frames per second (as opposed to the industry standard of 24 frames per second) throws the film into a kind of hyperreality that plays mad tricks on your eyes and makes everything seem more staged.

Now that I've been taking actual real film classes, I can explain the process in a little more detail (and how it's a terrible choice for this film). It's all about shutter speed. To display a film at 24 fps, a camera (naturally) needs to shoot at 24 fps. This shutter speed is a little slow, which means that each individual image has a little bit of motion blur on it.

We don't notice it when the video is playing because we're used to seeing a little bit of motion blur in our everyday lives. Wave your hand in front of your face and you'll see what I'm talking about. But the thing with 48 fps is that the faster shutter speed produces absolutely clear frames without a trace of that blur. So the film is reproducing reality with a clarity that our own eyes don't even see and as a result it messes the hell with your visual cortex.

It's unnatural and nobody can really function properly until they get used to it. Motion sickness, headache, you name it. It's a kind of cool novelty but it's not really worth the price you have to pay. And the hyperrealism just isn't a good fit for a fantasy designed to lose yourself in. It doesn't help that, out of all of the Jackson Middle Earth films so far, this one is the stagiest. 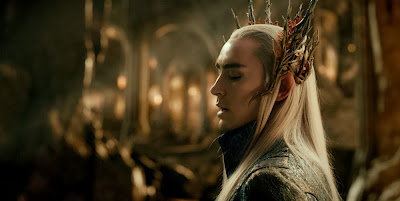 However, it is also the Lee Pace-iest.

Picking up where the last film left off, The Desolation of Smaug opens with Bilbo Baggins (Martin Freeman) and the host of dwarves (twelve interchangeable actors) led by their king Thorin Oakenshield (Richard Armitage) and guided by the great wizard Gandalf the Grey (Ian McKellen) about halfway to their destination, the Lonely Mountain, where the grand dragon Smaug (Benedict Cumberbatch) is jealously guarding his treasure.

Thorin desperately wants to retrieve the MacGuffin Stone from the dragon's stash because it'll make him king or something? I'm sure this is explained either in the prequel or some deeply buried Tolkein footnote, but it is certainly not clear in this film.

As they continue on with their enormously bloated adventures based on a book roughly the size of Chapter One of Fellowship of the Ring, they progress through several more video game levels as they approach Smaug, the Final Boss. They explore a haunted forest, an impoverished lake town ruled over by a tyrannical despot (Stephen Fry), and the Elf Kingdom ruled by Thranduil (Lee Pace) and populated by exactly two elves: Legolas (Orlando Bloom) and Tauriel (Evangeline Lilly), a character invented solely to create a love triangle between the shoved-in Bloom and the sexiest dwarf. Since Twilight cornered the market on vampire romance, why not give dwarves a try?

Do I even need to tell you that it's all unnecessarily drawn out and tedious? I think we should come to expect these things. The film is keen to explore the vast and limitless possibilities of Middle Earth politics and these exposition-dense scenes are infrequently interspersed with battling swarms of CGI monsters. It might as well be one big animated movie for all the care and attention that went into them. Honestly, a bunch of dudes in rubber suits would look better and probably save Peter Jackson a ton of money.

Smaug looks like someone forgot to render all of his scenes, Sauron's introduction looks like an Iron Butterfly music video, and the molten iron ore in the dwarf mines is hyperbolically humiliating. The fakiness of scenes can only be matched by their length as the film marches through disconnected setpieces with as much narrative thrust as an arthritic slug.

It's perhaps a little less "New Zealand Pony Parade" than the first Hobbit film was, but it's all kind of like watching somebody else play a video game - tedious and a little bit aggravating. 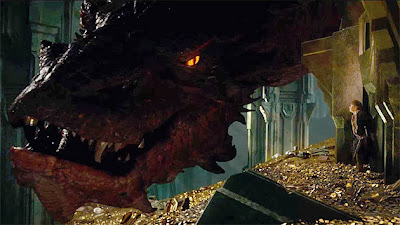 Although I would definitely play a game where Lara Croft and Smaug battle it out.

And the acting across the board is uninspired. Martin Freeman turns in a much less committed performance as Bilbo Baggins, largely because his character is given next to nothing to do, and Lee Pace was a good addition to the Middle Earth Repertory, but is underwritten in the few scenes he appears in.

Everybody falls into the mode of Fantasy Speak - vaguely British inflections that show how Epic and Important everything is but don't really require much effort to put on. It's all very demonstrative and broad, so no character really feels fleshed out as an actual being with thoughts or emotions. They are more Middle Earth tour guides than real characters.

Now really, it wasn't quite as terrible as all that. There's a tremendously well-choreographed river rapids fight scene that's sprightly and fun, and there's enough fantasy adventure to keep one occupied at a basic narrative level, but it's such a step down from the majesty of the original trilogy and even the adequacy of An Unexpected Journey that it's hard not to feel like it is deliberately trying to annoy you.