CinemaBeach: The Kids Are All Wrong 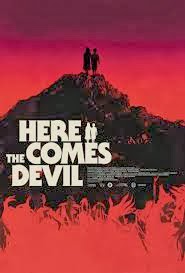 Because thanks to CinemaBeach, I'm technically a member of the press, I was allowed to view an advanced screener of a cool little indie Mexican horror film, Ahí va el diablo (Here Comes the Devil).

Mom and dad, I'm finally getting somewhere! When you were looking at me in that little hospital room in St. Joseph's, I just know you were hoping that one day that bouncing babe in your arms would be allowed to watch Mexican horror movies a couple weeks in advance.


When a horror movie opens with a lesbian sex scene, you think you know exactly what you’re in for, but in this manner Here Comes the Devil is surprising. This Mexican independent psychological horror film doesn’t quite land its psychosexual leaps, but makes a good argument for allowing a bigger budget production of the same story.
Married couple Felix (Francisco Barreiro) and Sol (Laura Caro) are on a trip to Tijuana with their two young children, Adolfo (Alan Martinez) and Sara (Michele Garcia). When the children go exploring on a looming hill overlooking the motel, their parents do a little exploring of their own. When Sol and Felix awake, night has fallen and the kids still haven’t returned. When they set off to resume the search in the morning, the police pull in at the last second with their offspring in tow.
They’re delighted, but Sol soon realizes that things aren’t quite… right with her children. They whisper to each other and share private glances and wander around with blank stares like automatons. Their psychologist suggests that perhaps they were victims of sexual trauma but once mysterious happenings begin, well, happening, around the house, Sol sets out on an investigation of her own.
A roiling sexual undercurrent drives the whole thing like a watermill – the childrens’ disappearance is timed with their mother’s orgasm, the entire incident is incited by Sara’s first period, Sol needs to discover whether the children are victims of sexual assault, demonic possession, or both. In fact there is so much sexual implication that it’s a real shame it doesn’t quite adhere to the plot in any particularly meaningful way.
It’s clear that there was a grand master plan with all of this, but unfortunately it gets lost beneath a massive pile of exposed breasts. With the opening lesbian sex scene, multiple shower scenes, a mysterious force pulling Sol’s shirt open, and a babysitter opening her blouse to show bruises on her chest, all combined with the shallow lighting and under-decorated flat sets, it all feels more like an exploitation film than anything with a true intellectual purpose.
It’s a real shame, because there is a lot to respect in Here Comes the Devil. We can forgive the film its predictable ending for the amount of tension it builds in the lead up to it. Here Comes the Devil has a foreboding atmosphere baked into it by the blazing Mexican sun and the oppressive heat that emanates from every frame.
It’s not often that a film almost completely devoid of shadow or darkness can be described as atmospheric, but there is real talent behind this film, despite the limitations of its budget. The real masters here are the sound designer and makeup artist, who more than make up for the limitations of the cinematography and production design at least in the scenes where their work gets to take center stage.
In some of the more intense moments, the audio goes out of focus, swimming in and out in a way that reminds one positively of the moments in [REC] where the camera is struck during a scuffle. It is immensely effective and creepy, and when combined with the hard rock music cues and some creative use of tribal drums, makes for the best scare scenes of the entire film.
The single most impactful moment of Here Comes the Devil, which I won’t spoil here, is a tremendous gore scene that seems to demur at first, but then throws itself full tilt into a truly disgusting, squelchingly visceral, immensely fun sequence that is the reason anybody will remember the film and it deserves it.
Because when it comes down to it, the film is all potential. The atmosphere, the curious but effective reliance on rack zooms, and the creative psychosexual spin on a genre that hasn’t been fully explored are all bogged down by the film’s microbudget, straining to escape but ultimately unable to rise above the mire.
This one gore scene contains everything that is right about the movie, and on the strength of that sequence Here Comes the Devil shows its worth as a piece of cinema. Although I am loathe to say it, this is a film that could flourish with a big budget American remake if helmed by a director dedicated to the project, much like The Ring in 2002.
Ultimately it’s definitely worth watching for fans of Mexican cinema, but if you’re just a casual horror fan I’d suggest not making the trip out to one of the few theaters that will be showing it. Here’s to hoping they have a good producer who’s shopping it around in Hollywood as we speak. ¡Buena Suerte!
TL;DR: Here Comes the Devil has good tension building and one terrific gore scene, but it is betrayed by its low budget.
Rating:  6/10
Should I Spend Money On This (When It Comes Out)? Pretty much no. Not unless you like technically dubious Mexican child thrillers.
Word Count: 962
Also sprach Brennan at 4:06 PM