Merry Christmas, everybody! I firmly adhere to the philosophy that you should never give a gift that you wouldn't want to receive yourself, so here is the second film from this year's Christmas Slasher Marathon! 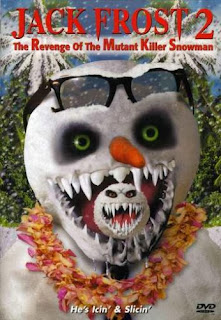 Right off the bat, Jack Frost 2: Revenge of the Mutant Killer Snowman does something most horror sequels don't have the smarts to do: show a survivor who has been psychologically affected by the events of the prior film.

After Jack Frost(Scott MacDonald)'s attack on the sleepy mountain town of Snowmonton, Sheriff Sam Tiler (Christopher Allport) is severely shaken and seeing a psychiatrist who mostly just giggles at his story of a killer snowman. Christmas is approaching, and with it comes the anniversary of the dreadful attacks.

His wife Anne (Eileen Seeley) decides it's best to get away for the holidays so she and Sam decide to accompany their friends Joe (Chip Heller) and Marla (Marsha Clark) to their Christmas wedding in the Bahamas and that's exactly how I want my future marriage to begin. 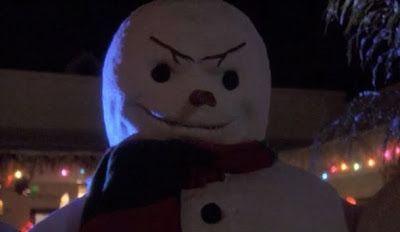 Jack Frost can be my best man.

Another thing Jack Frost 2 does right in terms of horror sequels is to bring back most of the original surviving cast. Not that this is a Scream level accomplishment, but it is worth noting that at least on paper, this is a great sequel.

Due to some sort of Rogue Science Brigade, Jack Frost is accidentally revived and stronger than ever. He can melt and freeze himself at will and follows the happy couples to their island resort.

And before I get into this, let me explain. This is in no way a well made film. It looks like crap filmed in somebody's backyard for twelve cents. But on the script level, this is quite an impressive film - on the heavily curved scale of holiday slasher films based around bad puns, at least.

But the fact remains that this is a campy slasher films with genuine moments of intentional comedy that is actually quite funny. There are a couple truly sweet, tender moments and a couple of big guffaws mixed in with all the gory holiday mayhem. 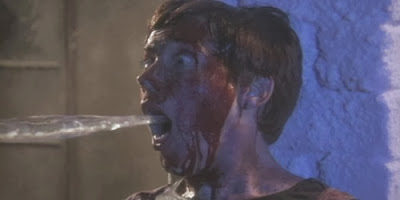 Of which there is plenty. Merry Christmas to me.

Of which there is an ample supply. Although they may be low on functioning telephone lines, the Meat Supply on the island is at an all time high. There's Rose (Jennifer Lyons), Ashlea (Shonda Farr - best known as Warren's girlfriend robot in the Buffy episode "I Was Made To Love You"), and Paisley (Granger Green), three college-aged girls on vacation; Dean (Brian Gross) and Ben (Jason Hall - another minor character from Buffy), two dumb but hot Cali surfer boys who have their eyes on the trio;  Charlie (Stefan Marchand), a fashion photographer, and his models Sarah (Melanie Good) and Cindy (Stephanie Chao).

There's also the staff: Bobby (Tai Bennett), the genre savvy Jamaican bartender who nearly survives the entire movie; Colonel Hickering (Ray Cooney), the British owner of the resort who we suspect has been alive since the British occupation of India in the 1800's based on his stories; Agent Manners (David Allen Brooks), the FBI agent from the first film who is now Head of Island Security; and Captain Fun (Sean Patrick Murphy), the party master and somehow not odious comic relief character.

With such a heaping helping of potential victims, Jack has a field day. Either the producers gave more money or less f*cks because the gore is wonderfully done and utterly bananas (sometimes literally). People are killed with icicles and snowballs and ice cubes and iced coffee and banana arrows and it's all just a wonderful explosion of the absurd.

Combine this with the actually genuinely good subplot elements the film carries along with it and you have yourself one of the best B-movie sequels I've ever seen. It's campy, hilarious, fun, and has cute little snowballs. 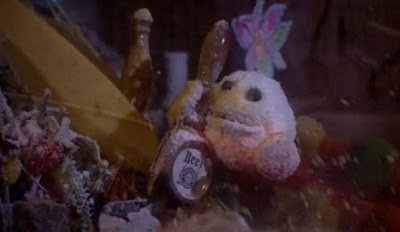 It's one of those hidden gems of the horror genre that I have dedicated my life to finding.

Killer: Jack Frost (Scott MacDonald)
Final Girl: Sheriff Sam Tiler (Christopher Allport)
Best Kill: One of the surfers gets his tongue stuck to a pole in traditional Christmas fashion. Jack Frost rips it off in traditional slasher fashion. One of the best combinations of two very campy genres I've seen yet.
Scariest Moment: A mini snowball dies in Jack's arms. It's terrifying how emotional this scene makes me. I shouldn't be having feelings in the middle of a slasher film.
Weirdest Moment: One of the models ices her nipples with a little piece of Jack.
Champion Dialogue: "You brought caulking on our vacation?"
Body Count: 22; Not including Jack Frost because come on.