I'm trying, I'm really trying to get my slate clean before the new year. I'd love to begin 2014 without any pending reviews to write, free to watch movies and write as I please. But as it happens, in the idleness of Winter Break, I've been watching far too many movies to keep up with. I am but a mere mortal. So, as per monthly custom, it is time to purge some of the less relevant films I've seen this month in a spate of mini reviews. Here goes nothing! 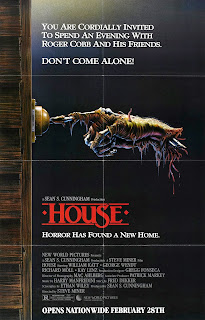 Our first target is 1986's House, not to be confused with the 1977 Japanese fever dream House (Hausu), or the 8 seasons television medical drama House, M. D., or the 2008 Michael Madsen thriller House. Or really any of those other movies that are exponentially better than this one.

From producer Sean S. Cunningham (Friday the 13th) and director Steve Miner (Friday the 13th: Part 2 and Friday the 13th Part 3: 3D), House is an alleged horror comedy in the vein of campy gore classics like Raimi's The Evil Dead or Gordon's From Beyond and Re-Animator. What those three movies share is a singleminded dedication to gleefully over the top gore and high camp in spite of the limitations of their poor budgets. Helmed by devoted and enthusiastic auteurs, these films looked cheap but made up for it with cleverness and fun.

House is yet another 80's cult classic where its reputation (largely derived from its sequel - House II: The Second Story) vastly exceeds its quality. Starring Norm from Cheers and William Katt aka The Greatest American Hero, House is a dull oddity about a struggling horror writer who is trying to write a memoir of his Vietnam experience in a house owned by his recently deceased aunt which turns out to be haunted.

In the grand tradition of cheesy B-horror, this film attempts to plumb a much deeper thematic vein than your average horror flick (namely the post-war reassimilation of veterans). Unlike its brethren, it is an unusually shallow and pointless exploration of such. There is some joy to be found in the monster in the closet and the gonzAno closing scene, but most of it is stifled with pacing as stiff as a corpse's joints.

There is a surprising deficit of actual comedy and the whole affair feels much longer than 90 minutes. It's plagued by a common 80's horror ailment - Fadeout Disease - and despite some of its more gleefully campy charms, it is better to let sleeping ghosts lie in this case. 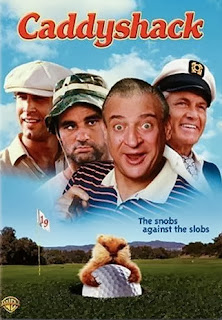 It is interesting that a comedy at least nominally about the young caddies at a golf course should focus so heavily on its older male characters, but as it is it's an interesting combination of upper class caricatures heavily intermixed with copious teen nudity and revelry.

A classic comedy that doesn't play quite as well today, Caddyshack is still a clever and charmingly batty look at life behind the scenes at a country club. Cast with a whole pack of comedy greats in their prime, classic line deliveries zing left and right.

The filmmaking of Caddyshack isn't the best thing in the world. In fact, it's quite grainy and washed out for a studio comedy of its time. It seems like something that could have been produced in the 50's, although this isn't necessarily a problem and lends a kind of wholesome feel-good atmosphere.

And though the script is well done, the teen antics pale in comparison to the veterans of the craft who are made of much sterner stuff. Allowing Murray, Chase, and Dangerfield a chance to run the show instead of placing protagonist duties on the young shoulders of Michael O'Keefe would have allowed the film more room to breathe and avoid the hijinks overwhelming the script.