This Monday was the last official lecture class in my Horror Seminar for the semester. It's a darn shame, because that class was the light of my school week. Anyway, I'm really excited to see a final exam with the phrases "Wes Craven" and "re-animated corpses" on it, so there's a silver lining.

This is the last set of mini-reviews for my class (I have two more big reviews coming - I've been a little backed up due to finals and the fact that I had a fifteen page script due today that I began yesterday) and as we drew closer and closer to my revered decade of the 80's, the more exciting everything got.

Village of the Damned 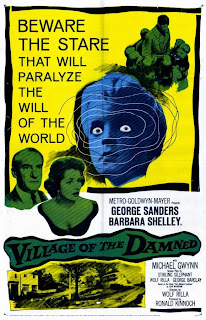 A massively successful British import, Village of the Damned is a slow boil, but is a lot more fun than the leaden horror fare the country cranked out for the entirety of the 50's. From German director Wolf Rilla (whose name sounds like it could be a SyFy Original movie), this tale based on John Wyndham's novel The Midwich Cuckoos is creative and enthralling.

One day, every single person within the town lines of Midwich falls unconscious for several hours. When they wake up, every single woman of appropriate age is bearing a child. These children grow quickly and their blonde hair and glowing eyes start to freak out the inhabitants. After a rash of mysterious incidents their parents must discover a way to save themselves while struggling with the idea of fighting their own offspring.

It's really a fascinating premise and although it's only explored in a genteel English manner, it still has the means to frighten despite the now supremely outdated glowing eye effects. Even though it's clearly a negative superimposed on a still frame, those moments remain spine tingling to this day. Perhaps not  film to recommend to most of the MTV generation, but any fan of classic horror could do worse. 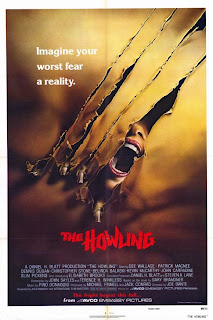 The first film screened during "Werewolf Week," The Howling was a film I was looking forward to greatly. My excitement was entirely predicated on that it was mentioned in one line in Scream, but it was genuine nonetheless. You can imagine my disappointment when it was really kind of terrible, and not even in the fun way.

Although my professor insists that The Howling is a horror comedy, I was hard-pressed to find a chuckle anywhere except the feeble wolf puns in the background (Somebody eats a can of Wolf chili. A man is reading "Howl.")

The opening scene is quite nice, in which an intrepid reporter (Dee Wallace) is accosted by a werewolf in the red light district. It was interesting to see a werewolf scene set smack dab in the middle of urban America as opposed to some creepy far-off woodlands.

The film does have some interesting things to say about werewolfism as a metaphor for hedonism and exploring your base animalistic instincts but it is weighed down by highly dubious (and inconsistent) alterations to the classic werewolf mythology, a screechy protagonist, and an early transformation sequence in which some VFX artist clearly just drew a wolf onto the frame.

Although I did like the ending. [Dee Wallace gets shot in the face.]

An American Werewolf in London 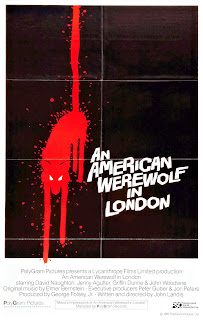 Now this is more like it. A violent werewolf movie influenced by A Connecticut Yankee in King Arthur's Court directed by the guy who did Animal House that opens to the strains of "Bad Moon Rising?" Already an infinitely better film than The Howling.

David (David Naughton), our young (hot) protagonist has his vacation in England hampered by a wolf attack on the moors that leaves his friend Jack (Griffin Dunne) dead and him in a coma for several weeks in a London hospital with a nasty bite on his arm.

When he is visited by the mauled ghost of his dead friend (complete with flapping jaw skin every time he opens his mouth - brilliantly disgusting), he learns that he is to become a werewolf and that if he doesn't die and end the curse, all werewolf victims are doomed to be trapped in Limbo for all eternity.

It's heavy stuff, but the film is hilarious. A pretty young nurse (Jenny Agutter) takes David home and they do it. A lot. This is a patient that every doctor in London is convinced is a mental case that this young nurse took home without telling anyone. But hey, there's no closed door in the world that beauty can't open.

One great werewolf transformation scene later, David is on the rampage across central London, making good on the film's title. For a lot of films that claim to take place in a major city (cough cough Jason Takes Manhattan), the city scenes feel brief and unsatisfying but David's mayhem in Piccadilly Circus is very worth it. 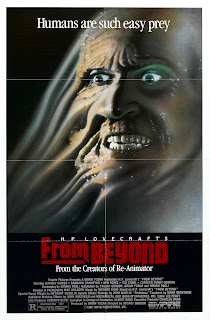 The first film in our double feature screening was Re-Animator, a fun cult classic that I have previously reviewed. From Beyond, another H. P. Lovecraft-based film from the same director, producer, and returning cast members Barbara Crampton and Jeffrey Combs seemed like it would be in the same vein, with silly over-the-top gore and pure camp splashed across the walls.

We did indeed get a silly, campy B-movie with some outdated effects, but one that was filled to the brim with flesh-twisting Lovecraftian horrors. Among the staff of the large make-up department was gore legend John Carl Buechler (who also directed my favorite Friday the 13th film, Part VII: The New Blood) and his incredible influence is truly felt.

I was nailed to my seat, looking up at the screen with a mixture of awe and abject horror. A Lovecraftian nightmare of incredible proportions, From Beyond tells the story of a machine that resonates at a frequency that stimulates the pineal gland in the brain, allowing those in its vicinity a sixth sense - the power to see into an alternate dimension that coexists with our own and is filled with bizarre monsters.

The only problem is that when the machine is on, they can see us, too.

Young scientist Jeffrey Combs and psychologist Barbara Crampton are investigating the effects of this machine and are drawn into a psychosexual nightmare of epic proportions, accompanied by Dawn of the Dead veteran Ken Foree.

A perfect mix of campy humor and gore and some truly terrifying and batsh!t insane effects pieces sent From Beyond into the stratosphere and I really can't recommend it enough. If you have one shot to explain to somebody the bizarre excesses of 80's horror, this film vies with John Carpenter's The Thing for the title of being that one film you should show to them.