Every December, while visions of sugarplums dance through your head, grotesque visages and blood-curdling screams dance through mine. For the third year in a row, I hosted my Annual Christmas Slasher Marathon, an attempt to plumb the most vile depths of holiday horror. Although I have forced my friends to sit through at least fifteen of the seasonal psychopaths, we have barely scratched the surface.

Today and tomorrow I will be posting the results of our most recent venture. 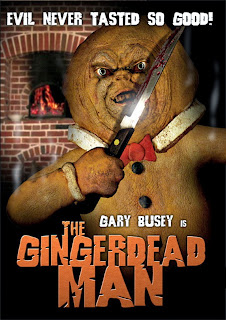 Did any of your jaws drop when you saw that this film was but a brief 70 minutes? Well I have news for you. Of that fateful hour and ten, roughly 14 of those minutes were credits. And with the way the plodding narrative pukes along, it could stand to be even shorter.

I'm embarrassed to admit that this film is the product of several of my favorite horror craftsmen. The director Charles Band is the producer behind some of my favorite 80's B-horror works, From Beyond and Re-Animator. It would seem that his dedication to throwaway low budget horror has brought him to a dark place.

And special effects designer John Carl Buechler has worked with some of the best and the brightest on films such as Halloween 4, A Nightmare on Elm Street 4, and... From Beyond and Re-Animator. He also directed one of my favorite Friday the 13th films: Part VII, where Jason fights a telekinetic teen. 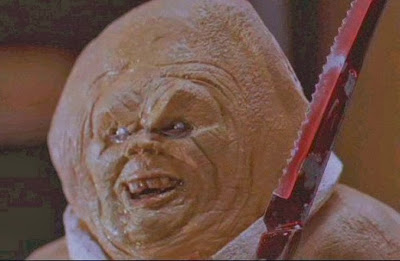 My, how the mighty have fallen.

The Gingerdead Man opens in a diner as the terrifyingly named Millard Findlemeyer (played by the ewually terrifying Gary Busey) robs a diner and shoots the patrons without blood or intrigue. Cut to two years later as the sole survivor of his bloodbath, Sarah Leigh -geddit?- (Robin Sydney, who has the dubious pleasure of being the only woman who can brag to have been in three Gingerdead films and every Evil Bong film) celebrates the murderer's recent execution by electric chair.

She works at a Texan bakery owned by her mother (Margaret Blye) and staffed by Brick Fields - Do you think his mother is the famous Mrs.? - (Jonathan Chase), an amateur wrestler known as the Butcher Baker and Julia (Daniela Melgoza), a Latina sterotype who defies expectations by surviving the entirety of the film.

When a mysterious package of gingerbread seasoning is dropped off at the door by a cloaked stranger, Sarah doesn't think twice about mixing it into a batch of dough and letting Brick bleed all over the bowl. It's a long story, but it turns out that they've baked Millard's ashes and now he's a vicious cookie puppet with a psychopathic bent.

To make things worse, a visit by competitor's daughter Lorna Dean -geddit?- (Alexia Aleman) and her studly boyfriend Amos Cadbury -the puns, they burn- (Ryan Locke) leads to a catfight that releases him from the oven, free to wreak havoc among the buns and frosted delights. 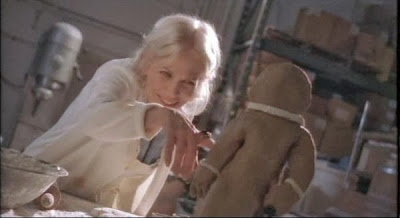 And to be mysteriously adorable from behind.

He's not really successful, killing a pitiful two people in largely bloodless ways, shouting at a rat, and making puns so weak they couldn't even hold up the wafer-thin plot.

The characters are only in danger because they stupidly refuse to just get the hell out of the bakery, the one set is barren and empty, people are rarely killed and mostly just bonked on the head and knocked out for a bit, and the blood is thin on the ground. For all the gore this movie has to offer, it might as well be Santa and the Enchanted Cookie.

It's not campy enough to justify the butt stupid premise and despite the promise of a seriously deranged Gary Busey, managed to almost put me to sleep on several occasions despite its perfunctory 56 minute net run time. 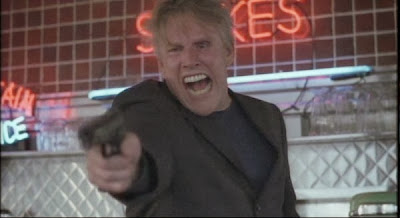 I'm not entirely sure how much acting he's doing here.

Killer: Millard Findlemeyer aka The Gingerdead Man (Gary Busey)
Final Girl: Sarah Leigh (Robin Sydney) and like three other people
Best Kill: Um... No?
Scariest Moment: Amos has an eyebrow ring.
Weirdest Moment: Sarah decorates the cookie before she even puts it in the oven. Laura: This is what happens when you predecorate your cookies."
Champion Dialogue: "Wherever you are up there, I hope they have strippers."
Body Count: 6; including the killer and the 3 in the diner opening sequence.
TL;DR: The Gingerdead Man does not make good on the title's promise of low budget camp.
Rating: 2/10
Word Count: 817
Also sprach Brennan at 1:50 PM