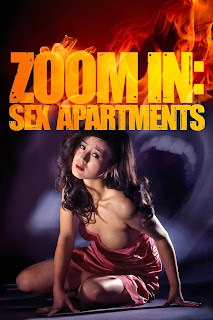 Year: 1980
Director: Naosuke Kurosawa
Cast: Erina Miyai, Keijirô Shiga, Yôko Azusa
Run Time: 1 hour 8 minutes
Through the course of this project, we have encountered the ever-elastic slasher film tradition melding with all different kinds of subgenres, from Italian cannibal film to Lifetime movie women's picture to National Lampoon laugh-em-up to Bollywood musical. And while the average slasher film is always in danger of fully crossing the line into softcore, 1980's applies the formula Zoom In: Sex Apartments somewhere that was probably inevitable: the Japanese pinku eiga or "pink films."
I am far from an expert in pink films, and the definition is wider or narrower depending on who you ask, but in essence this subgenre was a set of largely independent softcore and exploitation films that were popular in Japan from the mid-1960's through the 80's. In fact, Zoom In is technically part of a larger franchise (though every movie in the series was completely unrelated, and all the other ones were called Zoom Up), even if it's the only one to take this particular giallo-inspired tack.

It's not surprising that the giallo eventually got roped in, considering the constant unmotivated sex scenes in that genre. All you have to do to make a pinku into a giallo is add some black gloves.
Of course, being a pinku, the plot of Zoom In: Sex Apartments is wildly fucked up. While her biker husband is away at a race, housewife Saeko (Erina Miyai) is raped by a mysterious assailant while on a bike ride. Also, a serial rapist and murderer is stalking the grounds outside her apartment complex, assaulting women and setting them on fire.
This all rattles her, understandably, but doesn't prevent her from striking up an affair with Takaya Nakabayashi (Keijirô Shiga) the ex-boyfriend she abandoned five years ago, who has just returned from America. And also having some chillout sex with her best friend, shopkeeper Sachi (Yôko Azusa) and Sachi's husband Keigo (Ren Seidô). "Sex" meaning lots of boobs flapping around and extensive licking of every body part that isn't an internal organ, including almost no full frontal nudity. 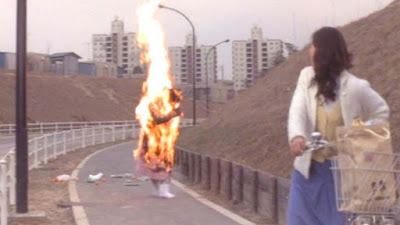 Never show this woman 28 Days Later.
Also, weirdly, of the softcore slashers I've covered recently, Zoom In actually has the most focus on its slasher subplot than any of them. It's not particularly good (the killer drops his case of evidence and it explodes all over the floor no fewer than six times), but at least it's committed to what it's doing! And this film came early enough that it owes more to the films of Dario Argento than those of Sean S. Cunningham, leading to some truly beautiful camera compositions in the narrative moments.
The design of the no man's land of arid dirt and garbage around the apartment complex creates a spectacularly alienating setting, and there are at least five shots that I'd call "beautiful" without hesitation. My favorite is a shot of Saeko's eye reflected in her open compact, which has fallen in the dirt, but here's another memorable one:

This aesthetic instinct comes to the fore most prominently in the final ten minutes, when Saeko descends into a pyschosexual phantasmagoria of madness where her erotic desires leave trails of flame behind her, culminating in a hallucinogenic sex scene with a pair of Takayas in a burning-down room. It doesn't make a lick of sense, but hey, neither does Suspiria.
The aesthetic is unfortunately the only interesting thing in the movie, however. I was toying with giving this a score that was one point higher, but then I remembered that a sex murder movie where the sex is either alarming or boring and the murder is either alarming or offscreen probably isn't worth rewarding.
Killer: Takaya Nakabayashi (Keijirô Shiga)
Final Girl: Saeko (Erina Miyai)
Best Kill: None of these kills are pleasant to watch, but during the murder of the Piano Sensei, there is a cool aesthetic moment of hands punching through the paper panels of a shoji sliding door.
Sign of the Times: One of the girls swans about in a pair of skintight pink leggings and a shiny silver jacket.
Scariest Moment: Saeko's attacker runs a piano hammer down her face, threatening to pierce her with it.
Weirdest Moment: A young woman who witnesses one of the murders at the local dump starts to eat food out of the garbage like it's popcorn while she's watching.

Champion Dialogue: "Take a good look! I'm a killer rapist now!"
Body Count: 6; and I'm including Takaya, even though the ending - which is most likely a fantasy - isn't exactly clear about him.
TL;DR: Zoom In: Sex Apartments is a particularly tasteless sex murder movie, but it has an unusual commitment to interesting imagery in its narrative moments.
Rating: 3/10
Word Count: 1124
Also sprach Brennan at 7:50 AM