Year: 1983
Director: Norbert Moutier
Cast: Robert Alaux, Françoise Deniel, Pierre Pattin
Run Time: 1 hour 30 minutes
Ogroff AKA Mad Mutilator is a strange duck. It's the first 80's slasher entry from France, for one thing. If you can call it a slasher. If you can call it a movie. The thing about Ogroff is that it defies classification. Even though it is abjectly terrible, its pared-down approach seems to appeal to cult cinemaholics looking for a hypnotic (read: drug-fueled) experience. 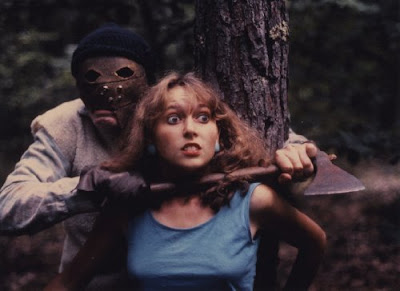 It's so pared down, in fact, that none of the characters have names, and are thus impossible to properly credit. My apologies to the alarming number of French people who read this script (presumably printed on a Post-It) and said "yes."
So. There's an axe-wielding cannibalistic killer wandering the forest off a highway in France. Presumably his name is Ogroff (director Norbert Moutier), but the only name that's actually spoken aloud in this movie is Leticia, and it's unclear if that's referring to the young boy that was just sharing the scene with the man speaking it, or the woman waiting by an unrelated car who never interacts with him. In fact, Leticia is one of the only words spoken in the film. More on that later.
Throughout the first act, Ogroff madly mutilates people with no names or character traits. The second act goes a bit Snow White, when a potential victim falls in love with him and they clean up his slovenly hut in the woods. The third act begins when she opens the trapdoor to the basement and a bunch of zombies emerge, triggering a zombie apocalypse that sends undead corpses shambling through the French countryside to wreak havoc. 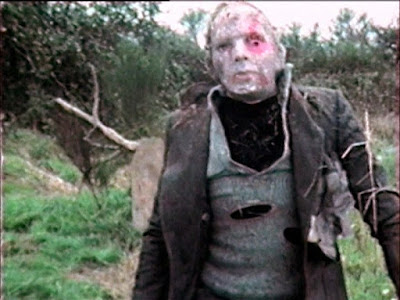 Behold! The very face of terror!
As you might imagine, the experience of watching Ogroff is certainly a journey. Sure, it's a journey through a vast desert with vultures circling overhead, but there's certainly a lot to see. For the first two acts, I was toying with giving this film a flat out 1/10. It's a punishing slog, the kind of slasher that eschews plot or character in favor of delivering the murders, only the murders here are poorly conceived (they pretty much all deal with various extremities one might chop off with an axe) and terribly executed (most of the kills occur just out of frame so we only see the aftermath, which is much easier to do effects on). When the only draw of your movie is papier-mâché gore splashed with red tempera paint, most of it so poorly shot and edited that it's difficult to parse out what exactly is happening, it's hard to summon any sort of interest.
The movie at this point was playing out like Blödaren but with less interesting characters, which I literally didn't think was humanly possible. However, once the Z-grade slasher wanes and the Z-grade zombie film kicks into high gear, Ogroff at least has the good sense to become a weird bad movie, which I'll take over a mediocre movie any day. It slaps us across the face with rapid-fire images and ideas that are sort of aggressively madcap. 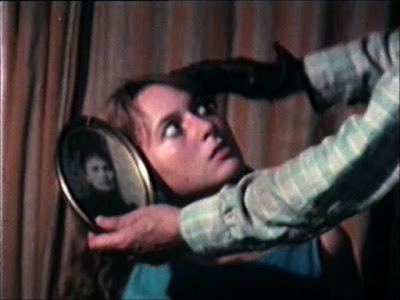 Oh yeah, there's also a Psycho homage, because we were apparently still stuck on that in 1983.
Ogroff wears its influences on its sleeve. Ogroff himself is clearly modeled on Leatherface (check his penchant for bone art and unearthly squealing) with a dash of Italian cannibal cinema. But, inexplicably, the filmmaker whose work Norbert Moutier seems to be pulling from the most is one Charles Chaplin. Ogroff is actually not dissimilar to Modern Times, as loathe as I am to say that. Most of the action is presented in a deliberate exaggerated pantomime, with only about seven lines of actual dialogue scattered throughout the entire thing.
None of it is effective, certainly, but there are enough haphazard impulses flying out of the screen at any given moment that they at least make one curious about what the hell was going through these filmmakers' heads as they lovingly constructed Ogroff. I would trade all of this vague interest for never having seen Ogroff in the first place, but at least it's something.
Though I have nothing genuinely nice to say about Ogroff, I suppose I shall end as positively as I can get. Moutier has a penchant for showing the POV of victims as blood is dripped directly on the camera lens, which is kind of fun. And this is certainly the first movie I've ever seen where a living person has eaten the guts of a zombie, so that's at least unique. Yay?
Killer: Ogroff and then zombies
Final Girl: N/A
Best Kill: There's an excellent "axe in the face" gag that rises above the rest.
Sign of the Times: Well, this movie wouldn't have any sort of cult if it was made today.
Scariest Moment: A zombie hand reaches through the wall to grab the girl, in a scene so oddly similar to a moment from Day of the Dead two years later that it makes you wonder if George Romero happened across this movie in a dusty basement one day.
Weirdest Moment: Ogroff places the axe between his legs and masturbates it.
Champion Dialogue: "Walking does you good... What a stupid bitch!"
Body Count: 12; not including a couple dozen zombies who are variously shot, dismembered, impaled, etc.
TL;DR: Ogroff is pure trash, but it's weird trash at least.
Rating: 3/10
Word Count: 1026
Also sprach Brennan at 10:48 AM