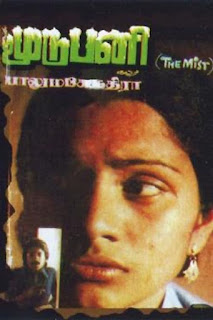 Year: 1980
Director: Balu Mahendra
Cast: Prathap Pothen, Shobha, Malasia Bhaskar
Run Time: 2 hours
There is a slight issue I come across sometimes in my journey to watch every single slasher movie released during the 80's: foreign countries like to make movies too, and sometimes if you want to watch a slasher released in a language you don't speak over 40 years ago, you have to take what you can get. And sometimes subtitles aren't a part of that package. So it's entirely possible that the screenwriter of the Indian Tamil-language film Moodu Pani (AKA The Mist) is the next Shakespeare. We're not here to review the story today, we're here to look at the 1980 porto-slasher as a purely cinematic and visual object, which is kind of the point anyway, wouldn't you say? 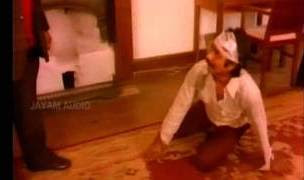 ...This still might not be the best movie to do that with.
Moodu Pani is another "hero killer" movie, like that same year's Maniac, centering around the psychology of its twisted protagonist Chandru (Prathap Pothen). Chandru hates women because his dad cheated on his mom, as far as I can tell. I will give that motivation the benefit of the doubt that maybe it's given more layers in the actual dialogue. But, knowing the state of the slasher film in this period, it probably doesn't. Anyway, he either is a taxi driver or frequently poses as a taxi driver (because he also works on a film set at one point, though never again), and he visualizes many of the women in his car as his dad's mistress and attempts to strangle them. There's also a woman who spends a full hour of the movie sitting on a porch chatting, and he's in love with her for some reason so he kidnaps her, leading to a prolonged series of escape attempts. 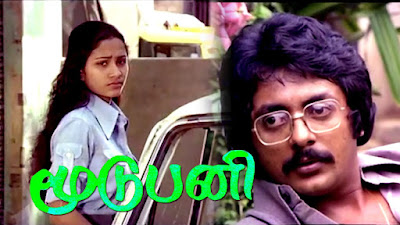 To be fair, I would probably be just about as confused about the plot if I could understand everything.
The film would probably be much more successful at delivering any kind of atmosphere if its killer wasn't one of the most milquetoast screen presences in the history of cinema. Pothen plays Chandru like a stammering geek, and while I understand this approach is meant to highlight the vastness of the evil living inside him, the (infrequent) killings are staged in a way that highlights their artificiality and don't pack the visceral punch of something like Maniac. That said, I could at least understand a woman initially trusting Chandru, rather than Joe Spinell's Frank in Maniac.
There are only two moments where Chandru seems like an interesting cinematic figure in any way, and both of them use the same technique to heighten the fright. Chandru seems to get stuck on a single phrase, begging a character for something he wants, repeating the same words over and over and over in an increasingly shrill plea. It's an outward expression of how he gets stuck inside an obsession and compulsively must act out his urges no matter what anybody around him thinks.
Unfortunately, I'm going to have to cut this review a little shorter than I prefer, because there's literally nothing else about Moodu Pani to talk about. Other than the novelty of being made in India, which has a gorgeous landscape and architectural tradition, the film has absolutely zilch to look at. It's understandably low budget, considering it doesn't even have the backing of the Bollywood machine, which wasn't as flush with cash in 1980 as it is now. But there isn't even a single angle the camera takes that makes a choice beyond merely staging the action in the center of the frame, lit with even, sanitized sitcom brightness.
It also does the thing that some Indian musicals do where they only justify shoehorning in music numbers during diegetic performance moments, which limits the fantastical inspiration that they usually are capable of exhibiting. While Moodu Pani has a performance or two, it couldn't really be classified as a musical in the way that the Hindi slasher entry from 1980 - Saboot - could. This prevents the film from wasting even more time, because those numbers wouldn't have been any good, but as such it lacks even the basic spark of joy that something like Saboot's swoony romantic number during a search for the corpse of the singing woman's father.
Killer: Chandru (Prathap Pothen)
Final Girl: Blue Shirtdress Girl, who if I had to guess based on who gets top billing is probably Rekha (Shobha)
Best Kill: Pass. But if I had to choose, as my article word count demands, I suppose the first strangling, which is rendered amusing by the fact that the lady's hands somehow end up super bloody despite her not being stabbed.
Sign of the Times: Chandru is rocking the mustache, clear glasses, ring tee vibe.
Scariest Moment: In one scene, a character is talking to Chandru but their voice is drowned out by a screeching in his own head.
Weirdest Moment: Again, maybe I'm misinterpreting events, but Chandru appears to solicit a prostitute via a six-year-old pimp.
Champion Dialogue: N/A
Body Count: 2
TL;DR: Moodu Pani is a movie I didn't get to experience in full due to a lack of subtitles, but I don't think it would have made much difference in me finding it aggressively bland.
Rating: 3/10
Word Count: 899
Also sprach Brennan at 9:13 AM