Census Bloodbath: Oh, Let Me Be Your... 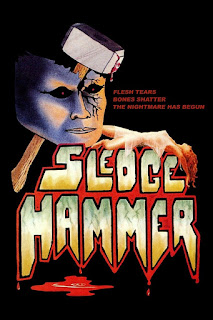 Year: 1983
Director: David A. Prior
Cast: Ted Prior, Linda McGill, John Eastman
Run Time: 1 hour 25 minutes
We've been spending a lot of time at the tail end of 1983 mucking about in the corners for some very off-kilter stuff, but it was still a shock how much of a relief it was to return to the familiar warm embrace of a shot-on-video movie about a group of teenagers drinking, doing impressions, having sex, and being picked off one by one. I'm sure I won't feel this way once I'm in the trenches of the late 80's, but in these early days of video (the very first SOV slasher - according to its publicists at least - is Boardinghouse, and that came out the very same year) it's still almost refreshing to come across something so straightforwardly craven. 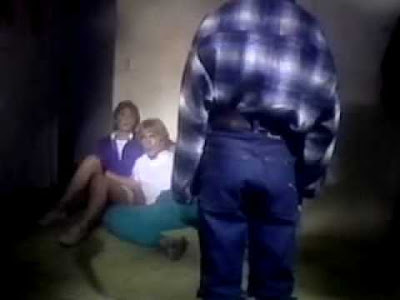 I'm trying my best to drive myself mad. Is it working?
Sledgehammer has a story that will be intimately familiar to any slasher enthusiast. Once upon a time, there was an abused kid (Justin Greer) who was locked in a closet so his mom could get it on with a mustachioed schlub in a ratty hotel robe. He (or some random maniac, it's not actually clear) promptly murders them with a sledgehammer.
Ten Years Later, a group of teens have decided that the best thing to do with their hard-earned break from college is to go to this very same house and drink a lot. They have a seance, which seems to resurrect the killer, who is alternately a kid and a giant hulking woodsy madman. The intervening time certainly isn't enough for this child to have gained this kind of mass, especially if he's a long-dead ghost, but I'm going to assume he can change size through the power of his convictions like Jet Jaguar in Godzilla vs. Megalon.
The Meat can be laid out thusly: Chuck (former Chippendales dancer and Playgirl centerfold Ted Prior, who would also team up with his director brother for the vastly superior shitty slasher Killer Workout in 1987) is ripped as fuck but also an enormous asshole, a pair of character traits that there is absolutely no precedent for in human history; Joni (Linda McGill) is his girlfriend who, rightfully, is upset that he proposed to her, backed out of the wedding, and yet insists that she still stay with him and tag along on this terrible vacation where he dumps mustard on her head and then talks to his guy friends about getting a "throbber" from looking at some random girl. This is the 80's and she has short hair, so Joni is of course depicted as an unbearable shrew.
The co-conspirators of this sex crime of a vacation are John (John Eastman), a loutish daddy bear; his girlfriend Mary (Janine Scheer), whose hobbies include being brunette and getting absolutely railed by John; Joey (Steve Wright), the prankster who dies first but not before pretending to die a half dozen times; Carol (Sandy Brooke, who had herself quite the Census Bloodbath run: we'll catch up with her in Bits and Pieces and Terror on Alcatraz), who really wants to have sex with her boyfriend Jimmy (Tim Aguilar), who really doesn't want to have sex with her for reasons she doesn't understand. 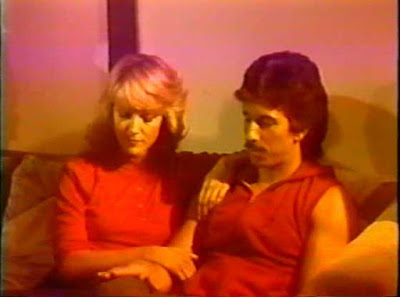 This conflict is one of the major arcs of the film, and it is never resolved. Well, it is resolved, but "she asked enough times so he had sex with her eventually" isn't worth all the Big Soap Opera Secret buildup we were given! I'm gonna go ahead and assume he's gay, because it's a free country.
There is a clear supernatural angle here, which mostly just serves to make the film more illegible (both visually and narratively), but it's at least something that prevents it from ending up like Blood Lake, a film that is similarly obsessed with exhaustively detailing every millisecond of the boring party games some white kids get up to. Does it make any sense? Of course not! But when your otherwise boring killer sometimes becomes a child who slaps the shit out of a Chippendales dancer, that's when your movie is getting somewhere!
OK, that's not fair. The killer presents a startlingly large, lanky physicality and also has a pretty stellar mask: a clear plastic jobbie with a painted-on smile that creates an uncanny valley where it almost doesn't seem like a mask at all, even though it certainly can't be a human face. 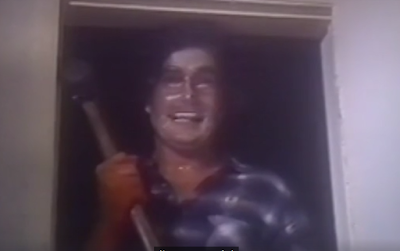 Say cheese!
The murders this killer enacts, however, generally leave something to be desired. They're a notch above what one might expect from your standard SOV fare (the gashes the sledgehammer creates have a pleasant almost three-dimensional effect, though they're always described with much more visceral language than what we actually see), with one truly terrific sequence (more on that later). But Sledgehammer still relies on silhouette and implication more than anything to get the message across.
At least the use of silhouette shows that director David A. Prior knows a single goddamn thing about film language, because the evidence of the rest of the movie doesn't look good for him. This 85 minute movie is so crammed with needlessly prolonged establishing shots and slow motion filler that it boggles the mind. When the exterior of a barn stays onscreen, unmoving, for 35 seconds, I thought my player had broken. Reader, it hadn't.
When a slow motion, sound and score-free shot of Chuck and Joni walking through a field and giggling with one another went on for a full minute, I was sure it must be a joke. When it continued for another full minute, I was sure it wasn't. When it continued for another twenty-six seconds after that, I realized that I had committed a grave sin in my life and Hell was giving me a free sample.
A broken clock is right twice a day, however, and the ample slow motion really serves the film's one good kill, where the killer inserts a knife through the side of Joey's neck. The intensely drawn out process of this kill forces you to reckon with the unnatural angle of the knife and just how nasty it might feel to be on the receiving end of it. It really sends heebie jeebies crawling up and down your skin. So that's a compliment for Sledgehammer! Don't get used to it!
The movie at least gave me the junk food experience of a formulaic slasher that I've been craving at this point in the project. It's very extremely bad, but that just comes with the territory, dunnit?
Killer: The Killer (Doug Matley)
Final Girl: Joni (Linda McGill)
Best Kill: That knife through the neck gag is very delectable.
Sign of the Times: Jimmy looks like John Oates on mullet pills.
Scariest Moment: A cloud reflected in a window pane looks like a mushroom cloud, which led me to ponder the implications of nuclear proliferation.
Weirdest Moment: While everyone is sitting down to sandwiches, Chuck squirts mustard into Joni's hair. She retaliates by smashing a cream pie into his face. You know, one of those lunch cream pies everyone always has lying around.
Champion Dialogue: "A seance, you know, talking to ghosts and goblins, raising the dead, stuff like that."
Body Count: 7
TL;DR: Sledgehammer is at least delivering the bare minimum of what it needs to be a slasher, but it's still some pretty gnarly shot-on-video trash.
Rating: 3/10
Word Count: 1288
Also sprach Brennan at 7:42 AM