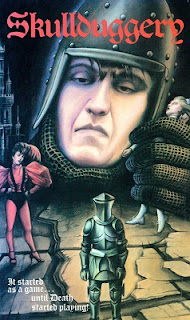 Year: 1983
Director: Ota Richter
Cast: David Calderisi, Thom Haverstock, Wendy Crewson
Run Time: 1 hour 35 minutes
MPAA Rating: R
We do tend to take it for granted around these here parts that Canadian slashers are on average of a higher quality than their American counterparts. One must remember that there are exceptions to the rule, but that's how one gets an average, folks! Even the shittiest Canadian movies tend to have a handmade feel, however, which is quite nice. And there's a sense of camaraderie you don't get from the states. Because the Canadian film industry was so small at the time, there are always familiar faces lurking around behind and/or in front of the camera. Any Canadian slasher from the early 80's feels like a big group of friends putting on yet another show for you. It'll be interesting to see how well any of that holds up to Skullduggery, which is so egregiously terrible it defies all reason. 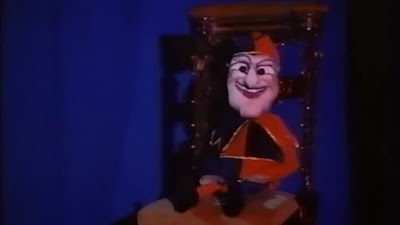 Maybe that was mean, but I'm American, baby! Expect it.
Skullduggery was clearly born from the impulse to exploit the satanic panic of the 80's, in which god-fearing, red-blooded American parents worried about pop culture turning their kids to Satanism through music, film, and (shudder) Dungeons & Dragons. This is essentially a Canadian counterpart to the Tom Hanks TV movie Mazes & Monsters, the anti-tabletop game propaganda piece that had come out the year before. The big difference between this and that pedestrian work is that Skullduggery doesn't make a lick of goddamn sense.
Sure, it's ostensibly about Adam (Thom Haverstock of Terror Train), an allegedly charismatic young man who gets overly invested in the unnamed role-playing game he and his friends play in the back room of his workplace, the Sluszarczuk Costume House. He begins to have a hard time separating fantasy and reality, and carries out the violent missions of his character out there in real life. Oh, and it's implied that he's a member of a cursed bloodline that resulted from a magician's coup in 1382 Canterbury, though that figures so little into the plot that they might as well have cut all that stuff and spared me a good 7 minutes of wasted time.
The other players of the game get about 15 seconds of screentime every 30 minutes or so (it's an extremely peculiar move that they are neither corrupted by the game or on the chopping block), but some notable characters who pop up during Adam's sojourns into the "real world" (this film's idea of reality is about as Lynchian as it gets) are Simco the Magician (James Coburn of Mark of Cain and NOT The Great Escape), who creepily wanders around performing shitty sleight of hand to the awe and delight of everyone; Madame Kardos (Denise Fergusson of Killer Party and The Incubus), a fortune teller who predicts his woeful path; and Mike, who isn't actually important, except I wanted to mention him because he's played by Michael Tough of Prom Night.
Adam also has a best friend/quasi-girlfriend Barbara (Wendy Crewson, also of Mark of Cain) who does less than nothing, though she frequently does it in this outfit that makes her look like she's delivering a message that will self destruct in ten seconds. 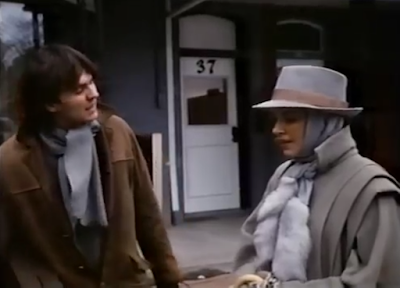 She might also watch someone through a pair of eyeholes cut into a newspaper, should the opportunity arise.
Skullduggery wants to do a lot. It probably should have started with executing its basic premise properly, but there's no use crying over spilled blood. Not content with just being about the danger of Dungeons & Dragons, it also sees fit to fold in the wickedness of the "devil horns" hand gesture and that urban legend about razor blades in apples on Halloween. As if its focus wasn't split enough, it also has the sickening urge to be a wacky comedy.
Too too often, they crank up the circus music as they drop puns about the Brooks Brothers or murder suspects being covered in ketchup rather than blood. This lack of investment in committing to neither pure horror nor pure comedy is ultimately what deflates Skullduggery to a withered husk of a film. The tones melt together into an incomprehensible mash, sending poor Adam spinning deliriously through an endless barrage of strange, disjointed sequences that have no relation to each other, the world we live in, or the language of narrative film as we know it.
Take the sexy nurse, who is in the predictable slasher situation of being screwed by a doctor on top of a gurney. It's not until the post-coital cigarette that we learn the doctor is dressed in a full-body gorilla suit, at which point he does a Humphrey Bogart impression and vanishes from the movie, save for a brief cameo later on. This certainly is random, but it isn't funny. And Skullduggery approaches "scary" even less than it ever does "funny."
There are quite a few kills in the movie, but all but one of them are ridiculously poorly conceived. Adam will brandish a knife so tiny it's invisible to the camera lens, lunge it vaguely toward an unidentified body part, and then the owner of that body part falls over. My body count section is an absolute hash, because it's nigh-on impossible to tell what's actually going on. 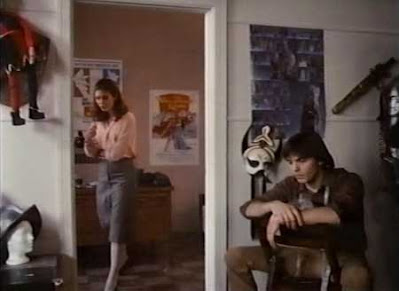 In his defense, he does wear a bunny suit during one of these moments, at least.
Really, Skullduggery just leaves us with a lot of questions: Why are we forced to watch a full 25-minute local talent show? Why is there so much Adam and Eve imagery? Why did this movie need its very own original theme song and who paid for it? And dear god why is there so much business about Barbara having a rash on her ankle when it doesn't actually come to anything? The one thing I have no questions about is the pre-talent show shot of two men in sailor suits carefully applying lipstick on one another. That can stay.
I don't think I've seen a more incoherent slasher film, and clarity is at the bottom of this genre's list of strong suits. At least we can rest easy that Skullduggery is much more effective anti-Dungeons & Dragons propaganda than Mazes & Monsters, because it makes the game and its players seem unspeakably boring.
Killer: Adam (Thom Haverstock)
Final Girl: Barbara (Wendy Crewson) is a girl and she lives so I guess that counts
Best Kill: Unfortunately the lead-in to this kill is an attempted rape, but Adam does one-up Bay of Blood and Friday the 13th Part 2 with an unprecedented triple skewer sex kebab.
Sign of the Times: Two of the gamers show up to a session with fake arrows through their heads, proclaiming themselves to be "wild and crazy knights!"
Scariest Moment: Adam chases a nurse around her apartment, spraying steam at her from her iron.
Weirdest Moment: When a nurse is running for her life, she screams for help at the window, but the man inside, who is playing the organ in a sparkly red Liberace jacket, ignores her. 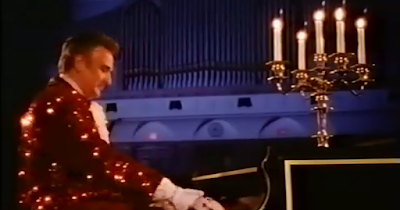 Champion Dialogue: "I've got a raccoon in my pants, would you like to set it free?"
Body Count: 17; not counting three people who walk through a spooky neon door and may or may not have been found dismembered in a fish tank later. That's by far the most unclear murder moment so I won't commit to categorizing any specifics. Oh, also there's a body that swings down from a doorway at some point that is either a previously unseen murder victim or the killer in disguise. This is also super unclear, but the body count is really big enough as-is.
TL;DR: Skullduggery is an incoherent, unfunny, unscary collapsed soufflé of a horror-comedy.
Rating: 2/10
Word Count: 1418
Also sprach Brennan at 9:00 AM