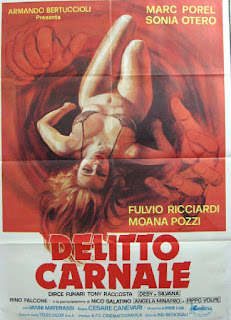 Year: 1983
Director: Cesare Canevari
Cast: Marc Porel, Sonia Otero, Fulvio Ricciardi
Run Time: 1 hour 32 minutes
The Italian giallo genre was waning by the time the 80's rolled around, but it certainly still had its fair share of entries. A lot of them tried to adapt the tropes and look of the American slasher, like Madhouse or StageFright Aquarius, and some kept their Italian flair, like Dario Argento's Tenebrae. I suppose today's topic, Cesare Canevari's Killing of the Flesh, is in the latter category. 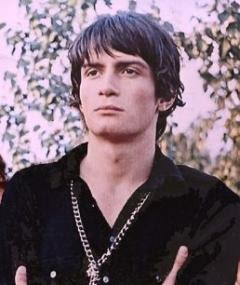 It certainly doesn't fit any slasher formula I've dealt with, and I've seen it all baby.
Killing of the Flesh is clearly trying to go for an And Then There Were None vibe. A group of family members and their sex partners (I'd say "romantic partners" but that might count as libel) have gathered in an old hotel after the death of their Uncle Domenici (for the record, not every character is credited on IMDb, so some people won't have listings unfortunately). They are prepping for the funeral and arguing about who will get the money, though there's no indication that the will reading will be happening this weekend.
There are around 10 different people holed up together, but the only ones who matter in any way are Jimmy, a frustrated artist who was promised funding by Domenici; Max (Marc Porel), who has the most screentime but about whom I can tell you nothing; Elena (Sonia Otero) a ravenous bisexual with a curtain of unruly ginger curls; and Martine (Moana Pozzi, the porn star whose name famously forced Disney to change the title of Moana to Oceania in Italian markets), a former prostitute who Elena has chosen to be her special companion for the evening. Once everyone is gathered, they all fuck each other. Then one person is murdered, the cops force them to stay in the hotel while they investigate, and they all fuck each other again, but in different combinations. Maybe there's another couple murders on the way, too. 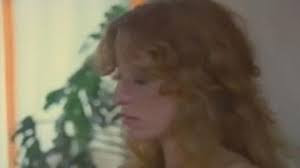 That's a big maybe.
Killing of the Flesh might be masquerading as a giallo whodunit, but it's transparently only interested in being a softcore porno. An orgy at a family reunion sounds like it might at least be fodder for something scintillating and taboo-demolishing, but I assure you it's boring as sin. Literally, I suppose. I'm sure aficionados of vintage pornography will have some measure of interest in random people's asses bobbing up and down in front of the camera, or the 20-second shot of two sets of breasts having whiskey slowly dribbled on them, but I do not count myself among that number.
Sure, as a gay man, this is not the type of stuff I'm in the market for, but I can appreciate the aesthetics of sex I'm not invested in. Bound is one of the hottest movies ever made, and I have no vested interest in any of those sexual proceedings. It also has an extremely questionable approach to consent and violence against women, but honestly that's par for the course for Italian horror (in one of the film's most bizarre scenes, a man walks by a man performing oral sex on a woman - he drags the man's head backward, makes the woman stand, slaps her, and then walks off and allows them to resume). On top of that, Killing of the Flesh has a workmanlike approach to sex, assuming that pointing the camera at any cross-section of writhing flesh will cause a viewer to sweat. And sex is all it has to offer.
The film is a resounding, catastrophic failure as a giallo film. There are only two scenes that might be considered genuine body count kills, and one is a bog-standard "woman notices something spooky offscreen and then it cuts to black." The other is a moment that literally cuts from an unrelated scene to a woman already being strangled, in medias death. And that's it! Forget And Then There Were None. Try And Then There Was 80% of the Cast and They Were Too Busy Fucking to Notice.
So between the bad sex and no death, Killing of the Flesh is brain-twistingly boring. There's a scene where a man is just sitting there playing solitaire and I was so jealous of all the fun he was having. 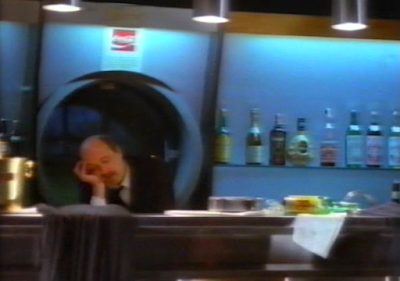 Pictured: Me about halfway through the film.
Oh, and just as a kicker, the infrequent dialogue scenes are incoherent (characters are introduced far too late for them to impact the plot in any way) and mostly comprise glowering stares anyway. But I suppose I should say something nice about the film, so here goes. There are a couple non-sex shots that are quite nice. There's a very James Bond-y moment where Elena is framed by Martine's open legs which is nice, and there's a moment where one of the women is making out with her beau and sees a vision of the late Uncle Domenici appear in the corner of the room. Oh wait, those shots were both just in the preamble to sex scenes. You see what I'm saying?
Killing of the Flesh is a tragic waste of time. At least it's not a waste of potential, because it didn't promise any potential to begin with.
Killer: Billy
Final Girl: Everyone and No One
Best Kill: In the final minute of the film, when we learn of the existence and then death of the hotel staff member Ms. Margerita, we are also treated to a flashback of her tea being poisoned, which is only unique because it was foreshadowed by a damp teabag on the table in an earlier scene, the only moment to actually feel like a clue to a murder mystery.
Sign of the Times: The music playing at their disco party sounds like a bunch of white people listened to disco and asked "what if it was quieter?"
Scariest Moment: The moment I saw there were five minutes left in the movie and only two people had died so far.
Weirdest Moment: Elena walks through a stable talking to the horses. She flirts with one of them, reminding him how she used to ride him commando.
Champion Dialogue: "Drink it, sweet sponge."
Body Count: 4
TL;DR: Killing of the Flesh is a languorous sex "romp" that is utterly disinterested in being a giallo, effective or otherwise.
Rating: 2/10
Word Count: 1097
Also sprach Brennan at 8:23 AM