Census Bloodbath: Run Of The Mill 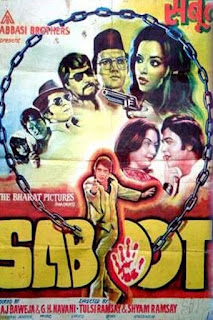 Year: 1980
Director: Shyam & Tulsi Ramsay
Cast: Navin Nischol, Vidya Sinha, Kaajal Kiran
Run Time: 2 hours 12 minutes
Well, hello there 1980. Now that we're done covering all the films of 1983, I figured the time was ripe to swing back around and catch somme films that I missed in my first pass of slasher research way back in 2013. I have now completed my second and third (hopefully final) pass at that research, so I've discovered a whopping 18 films from '80, '81, and '82 that I missed in my initial investigation, and thus we need to swoop back and cover. A lot of those films are foreign titles that slipped past some America-centric lists I was starting with, and the very first one we're here to cover, Saboot (AKA The Evidence),  is indeed an entry from the grand old land of Bollywood! 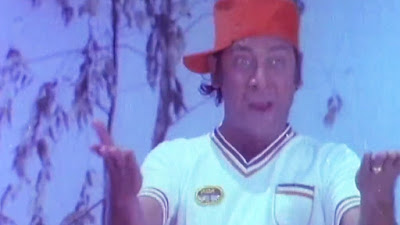 This does of course mean that there are some musical numbers in this one, and I truly think pretty much every slasher could be improved with the addition of musical numbers.
Being a pre-Friday the 13th slasher film, and one from the Bollywood sphere that is more interested in drama and romance anyway, Saboot is a very unique hybrid with a particularly labyrinthine plot. I'm gonna try to get us through just the basics as quickly as possible.
Asha (Vidya Sinha), is married to Vikas (no actor listed in English credits), who dies in plane crash. Then her father Dharamdas (no actor listed) is murdered by Dhanraj (Prem Chopra), the man who wants to buy Vikas' mill, but was turned down after taken out a massive loan. His accomplices are the sexy singer Rita (Padma Khanna), former mill manager Ashok Gupta (Narendra Nath), and former secretary Manmohan Saxena (Roopesh Kumar).
Naturally they begin to die one by one after witnessing what appears to be the undead corpse of Dharamdas, which is being investigated by Inspector Anand (Navin Nischol) - Vikas' childhood best friend, who is currently deep in the process of falling in love with Asha's sister Kajaal (Kaajal Kiran). Comedy cops Constable Dukhiram (Rajendranath Malhotra) and Constable Sukhiram (Paintal) are also on the scene to help in no way whatsoever. Ajit Roy (Om Shivpuri), who is either the sisters' uncle, or one of the many elder men respectfully called uncle, is the main suspect, and he doesn't do much in the way of clearing up that suspicion. 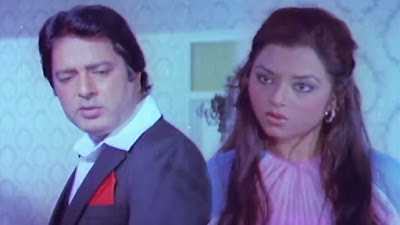 Not that Anand is noticing much of anything that isn't Kajaal.
Now I will be the first to admit that I know next to nothing about Bollywood cinema before 2000. I don't have a lot of context for what the industry may have looked like outside of this particular film at the time, but from what I understand, Saboot is structured pretty traditionally and is a teensy bit more low budget, but by what degree I couldn't begin to guess. But what I do know is slasher films, and Saboot is certainly doing something interesting even if it isn't particularly focused on being one.
The kills themselves aren't particularly well-executed (it's a lot of the "blood splatters on the wall" type cutaways), but the thing is that they all take place in some pretty great setpieces. We start from the murder on the train car, peak at a victim in a falling elevator (sure, it's no Damien: Omen II, but you gotta love a falling elevator kill), but don't drop too far when that one is followed by a death in a frozen storage facility full of Stonehenge-like blocks of ice that turn everything into a prismatic funhouse.
There are even some moments that are - dare I say it - kind of spooky! It's not a scary movie (maybe 1 in 100 slasher films actually are), but there is effective macabre imagery left and right, largely as the image of Dharamdas's corpse - which is basically just a zombie mask over bloody clothes - is tastefully abstracted by shadow and lightning or viewed through a kaleidoscopic block of ice. There are also some effective nightmare sequences involving a shower head spraying blood, and a severed head under a tea tray. 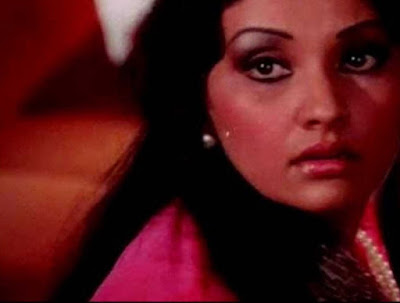 This is not a picture of anything I'm describing, but it turns out that still frames from a 40-year-old Bollywood horror movie aren't just littered around Google.
So that's the horror part. But we're dealing with Bollywood here, so there's a lot more to talk about.
Saboot is also an action film. This is another area that has its major flaws (notice how every attacker has their move blocked, then stands perfectly still waiting for the counterattack), but is saved by superlative Bollywood flair. These scenes come out of absolutely nowhere, but anytime your horror-slasher can be livened up by the hero beating up four purse-stealing vagabonds out of nowhere is a good scene.
Saboot is also a comedy. This is the thing it is worst at being, at least across the oceans of cultural standards, personal tastes, and shifting values across time that bring it to me. Comic relief cops are standard in cinema across eras and all over the world, and while Constables Dukhiram and Sukhiram aren't any worse than, say, the ones in The Last House on the Left or Halloween 5, they're certainly not characters I want to spend any time with. Take the joke where Dukhiram offers to cook for Anand. He opens a tray and a live chicken comes flying out. Get it? Isn't he so bad at cooking? It's just not to my taste.
Saboot is also a musical. I've already stated I love the insertion of musical numbers pretty much anywhere, though the ones this film has to offer are pretty anemic. This is the first Bollywood musical I've seen where I haven't wanted to add at least one of the songs to my iTunes library. The one big choreographed production number involves the constables and thus sucks, and the rest is mostly scattered love ballads where the lovers in question smile wanly at one another from across negative space (although one such number is staged in a spooky misty forest while they're searching for the hidden grave of her father, so that's... well it's something).
Saboot is a lot of things, but it doesn't really have the budget to achieve one of them perfectly, let alone all of them. For instance, this is a movie where time wantonly slips from day to night like our characters are a bunch of Billy Pilgrims unstuck in time. At least some of the mistakes fit in with the heightened Bollywood storytelling style: ie. a scene of a lawyer stepping into frame three different times in three consecutive cuts is certainly on purpose and it is terrific, and thus the scenes with random blue or red tint that is probably an accident feel of a piece with it. It's certainly interesting to watch, but with the typical 2 hour plus run time of Bollywood, it's just not fun enough to sit with it quite that long.
Killer: Ajit Roy (Om Shivpuri), though most of the body count deaths are accidental
Final Girl: Kaajal (Kaajal Kiran), I guess - it doesn't really apply here
Best Kill: I can't help it, I love me an elevator kill.
Sign of the Times: While mixing a drink at home, Manmohan sings "Venus," but not the one by Bananarama because it didn't exist yet.
Scariest Moment: The shriveled corpse of Dharamdas appears outside the elevator grate as Manmohan is going downstairs.
Weirdest Moment: Constable Dukhiram goes investigating in the rain while wearing a pair of goggles with little windshield wipers on them.
Champion Dialogue: "Rosy, my darling, my chicken pieces..."
Body Count: 5
TL;DR: Saboot is attempting to be a lot of things, but doesn't really have the budget to achieve any of them.
Rating: 5/10
Word Count: 1349
Also sprach Brennan at 8:02 AM