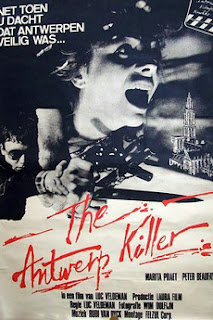 Year: 1983
Director: Luc Veldeman
Cast: Peter Beaufays, Eric Feremans, Michel Follet
Run Time: 50 minutes
1983 really was the year the slasher hit the wider world! This is the fourth film we've covered in two weeks that is the very first entry from a new country! The slasher in question is The Antwerp Killer, which as you might imagine is from Belgium. I don't speak a word of Dutch, and the copy of the film I was able to scrounge up had English subtitles that seemed to have been translated by a dartboard (see the Champion Dialogue section for my particular favorite mistranslation, though there were many to choose from), so there are certainly some nuances I missed. 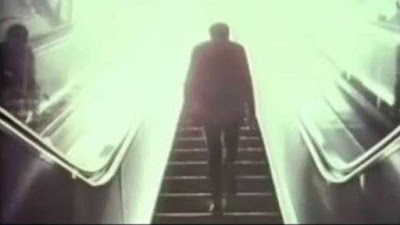 But I don't know how much nuance a 50 minute film about a slasher killer popping around corners and stabbing women really had to offer in the first place.
The plot, as far as I can tell, seems to be about a killer in Antwerp. He kills some people (not enough), a cop tries to find him (not hard enough), and some random unrelated crimes happen in between 3-5 minute chunks of filler, and then everything ends abruptly when a man who I can only assume to be the killer is shot. 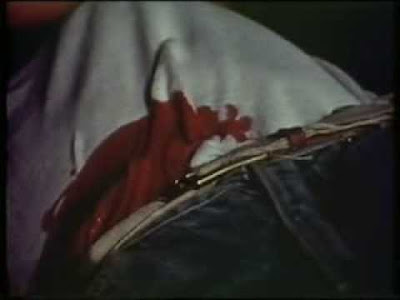 Good riddance too, he spilled ketchup all over my favorite shirt.
The thing I can say about The Antwerp Killer is that, while it is bad in just about every way it is possible to be bad, it's not - like - painfully bad. It's too brief to really stir up any sort of emotion, and at least it has the good sense to be slightly off-kilter, so while you're not enthralled by it, at least you can stare at it with your head cocked.
If what I've read out there on the big bad Internet is true, this was directed by a 17-year-old, and... well, actually it doesn't show. It's bad in a much zestier way than something like Blödaren was, and that was made by a grown-ass human adult. One thing I can say about Belgium is that they teach their kids early about filler. I'm glad their educational system is so robust, but I do wish that the film had been its true length of 35 minutes and didn't strap us in Clockwork Orange style for such extensive, frequent explorations of the various buildings and neon signs that Antwerp has to offer.
However, the most egregious filler moment is at least dynamic. It's a five-minute nightmare sequence that is created by whatever ribbons of outtake film they found in the cutting room dustbin, featuring random shots from scenes that have already played out and scenes yet to be shown. There's even a shot prominently featuring a crew member brandishing the film's clapboard slate, right there in the middle of the frame! 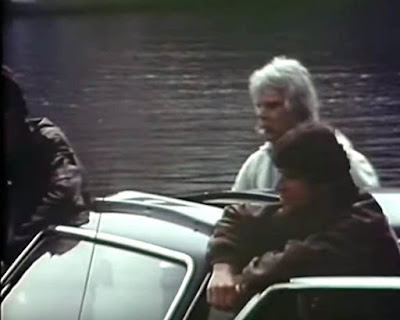 So that part is obviously also shitty, but at least it's shitty in a way that also made me wonder if I was going mad.
The film's disinterest in its own kills is a sin that I have no defense for, however. There are only two murders that can be considered part of the body count: one stab in the gut in a wide shot, and another stab in the gut that occurs offscreen because maybe they only bought a retractible knife halfway through filming? Who can know. Also, as little as we see the cop investigate the killer anyway, there's no whodunit involved because we see the killer's face the entire time.
I'm so glad this kid had the passion to make The Antwerp Killer a reality, but it begs the question why this particular project was the one that so caught his imagination. The only thing in this film that's remotely adjacent to quality is the score, which settles into something tolerable after an opening scene where it amuses itself by hitting the same shrill, high-pitched note over and over again. The synth used to create the score is certainly cheap and tinny, but at least the orchestration is layered and robust in a way that most cheap slasher productions can't boast. Even if the composer's peak moment is a direct rip from John Carpenter's Halloween.
So, there you have it! The Antwerp Killer is a slasher film that exists so I watched it. Let's not bother ourselves any more with it.
Killer: Moordenaar (Peter Beaufays)
Final Girl: N/A
Best Kill: Staging a murder on the stairway out of a subway station is a great concept, even if it's executed poorly.
Sign of the Times: A potential victim is wearing the most aggressively striped jacket I've ever seen.
Scariest Moment: The killer reaches his knife-bearing hand through the window above a woman's bed.
Weirdest Moment: That filler nightmare sequence is truly something to behold.
Champion Dialogue: "Darling tonight Ronnie and the Ronnies chicken roast sticks."
Body Count: 3; not including about a half dozen people who are killed in a shootout following a drug deal gone wrong.
TL;DR: The Antwerp Killer is inept in pretty much every way, but at least it's brief.
Rating: 2/10
Word Count: 871
Also sprach Brennan at 8:31 AM