Reviewing Jane: I Love You, Most Arf-ently 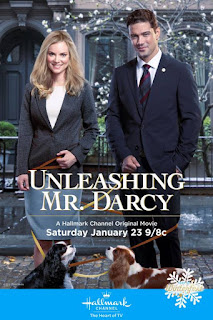 After almost two centuries of comfortable, quiet general admiration of her work, the world spontaneously decided to go absolutely nuts over Jane Austen in the mid-1990's. Not that I mean to discount her massive importance in the literary sphere, but it was honestly a little inexplicable and random how it happened. However, now that it's here, it certainly doesn't show signs of stopping anytime soon. As recently as two years ago, there were no fewer than four of said adaptations within a matter of months!

Of course, the Hallmark Channel had to get in on this enduring trend, so they got their grubby little hands on one of the many many many Jane Austen reinterpretations (see: fanfiction) that have been published in the intervening decades, and thus Unleashing Mr. Darcy was born. 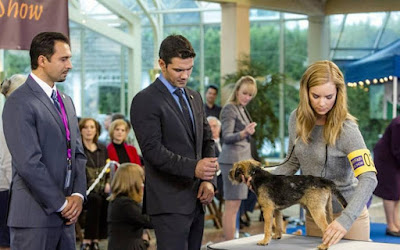 Don't get too excited. That title is just a dog show pun, he's not gonna become like the Incredible Hulk or anything.

The plot of this movie should be pretty familiar at this point, but as with any modernization of a classic novel, it's always interesting to see how characters get chopped and screwed, remixed, and decontextualized, much like the same year's Before the Fall. Of course, given how the back of the DVD credits the illustrious "Jane Austin" for its source material, maybe the changes happened just because they didn't actually read Pride and Prejudice that closely (more evidence to the fact: There is a character named Mr. Bingley, but he shows up as a featured extra for one scene, and the guy who falls for the older sister is in fact somebody completely different).

Nevertheless, have a plot this movie does, as brutally simplistic as it might be. High school history teacher/dog show contestant Elizabeth Scott (Cindy Busby) has been suspended from her job after Grant Markham (Ken Tremblett), who is - and I quote - "a lobbyist for Wall Street," attempted to bribe her to give his lacrosse jock son a bette grade. His wife is on the Board, so Elizabeth certainly has a right to distrust rich people, wouldn't you think?

Enter Donovan Darcy (Ryan Paevey), a dog show judge whose brusque and businesslike treatment of Elizabeth's dog Bliss. He's unbearably sexy (though only shirtless in one scene, because Hallmark likes to waste my time), but she finds his behavior and wealth distasteful. Unfortunately they are thrown together quite a lot when she take a job as a dog handler for her friend Gabrielle (Elizabeth McLaughlin). Thus begins a "romance" where Donovan acts out a hilariously transparent female fantasy - at one point he literally pays her to play with puppies - and Lizzy snipes at him constantly. Seriously, she is so mean for zero reason.

The biggest obstacle to their burgeoning love - other than how horrifically brutal she treats him - is his aunt Violet (Frances Fisher), who dearly wants to force him to marry his best friend's sister Felicity (Courtney Richter). 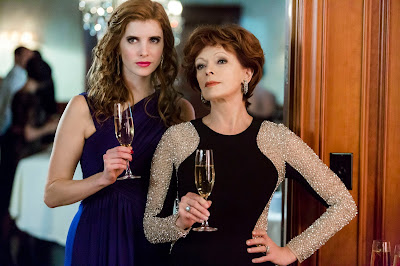 Their relationship makes no sense, but you can't just go around trying to get cousins to marry each other anymore, so I DO get why they changed this particular part.

I always think watching a Hallmark movie will be a hilarious good time, but then I remember that I'm confusing it with Lifetime. The soapy drama and sublimated sexual fervor of the latter makes for some highly stimulating trash. Hallmark, unfortunately, is only committed to toothless, run-of-the-mill trash, which just isn't the same.

There are a few spurts of campy fun - mostly whenever Frances Fisher is onscreen, turning up to devour the scenery and crank the drama up to 11 in her cream-colored turtleneck - but Unleashing Mr. Darcy is mostly a repetitive slog that fails to recreate anything remotely recognizable as human behavior. Seriously, I can't get over how brutal this Lizzy is to this Darcy. The proportions are all off: She's more Lizzy Borden than Lizzy Bennett. His offenses are too slight to deserve a movie's worth of disdain, and her constant mockery of him completely ignores every action he's ever performed.

She's attempting to push back against a wholly imaginary straw-man character she has created in her head, to the point that the movie feels less like a romance and more like a psychosexual horror film about a paranoid schizophrenic. 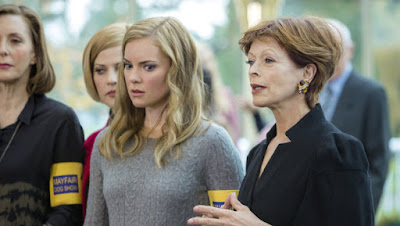 Actually, that's not a bad idea... Fetch my script-writing pen!

And obviously, with the exception of Frances Fisher, the acting just isn't up to snuff. Cindy Busby fails to find a character in the ball of simpering aggression that is Lizzy Scott, and all the women around her seem to have been directed to talk... As slowly... As possible. Paevey is perfectly fine, as the Darcy role pretty much requires any actor to glower sexily and be completely impenetrable. As far as that goes, he does the job, although nearly every line out of his mouth comes at a machine gun pace, as if he's making up for the time we lost with everybody else. And as for the dogs? They're cute I guess. I'm not a dog person, and clearly neither is anybody else in the movie given their stiff, reluctant handling of the poor creatures. It's OK though, because the movie forgets it was ever about dogs about 35 minutes in.

The gentle thrum of mediocrity that is Unleashing Mr. Darcy might not provide the dramatic heights I was hoping for, but at least there are a few satisfying filmmaking lows. Between the classroom set that is clearly a Hallmark Channel office conference room tot he fact that roomfuls of white people feel compelled to clap every time Lizzy and Darcy kiss. This isn't the worst way to while away the time riffing with some friends, though there's obviously much better material to do this with. But if you have the same Venn diagram of Jane Austen fandom and bad movie love as I do, you might as well see if it captures your interest. It's short as hell, at least.