In anticipation of Upgrade, which is directed by modern horror maestro Leigh Whannell, I'll be reviewing Next of Kin, an early slasher entry that also hails from the great land of Australia. 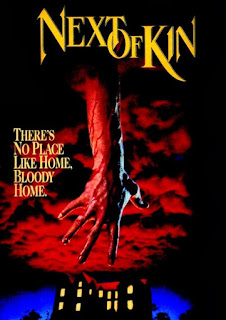 Australian slashers certainly don't have the track record for quality of Canadian slashers. For every Road Games, which is just shy of a masterpiece, you get a Lady Stay Dead, which is just shy of bottom-feeding garbage, and a Nightmares, which is deeply mediocre and forgettable. But it's always interesting to step outside of the American horror milieu for a bit, and there was always a chance that Next of Kin was going to be more of the former than the latter, right? 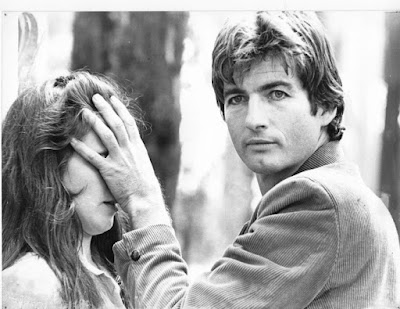 Next of Kin follows Linda (Jacki Kerin) as she returns to her hometown for the first time in years after the death of her mother. While she tries to figure out what to do with her property and assets, she also must maintain operations at Montclaire, the retirement home her family ran. One day, when she's off canoodling with rekindled flame Barney (John Jarratt, who has apparently been working looooooong before Wolf Creek hit the scene), one of the residents is found drowned in the bathtub.

This horrifying discovery finds Linda uncovering a link between past evil deeds in Montclaire and the present day, in which that evil might be operating once more. While she attempts to care for her doddering father figure Lance (Charles McCallum), she discovers that she might just be needed to solve a decades-old mystery. 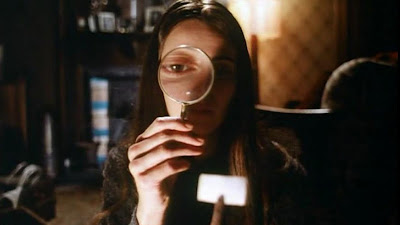 Something she is very capable of doing, I'm sure.

Honestly, there's a lot to like in Next of Kin, only none of it is actually related to being a good slasher movie. Like a lot of Australian genre flicks, there's an off-kilter weirdness that dominates a lot of the character moments (we're introduced to Linda having a conversation while building a tower of forks), and all of that culminates into a truly bonkers Final Girl sequence that mixes a screeching sound design with a deeply unpredictable chain of increasingly explosive events (similarly, Lady Stay Dead comes alive during the third act chase, becoming leagues more cinematic in the process).

And then, every 25 minutes or so, some imagery kicks in to totally knock you out of the film you thought you were seeing and into a surreal nightmare that lingers in the consciousness long into the succeeding scenes. These elaborate shots use slow motion with intention and purpose to create a phantasmagoric atmosphere, creating a sense of pain and violence more than actually showing it. These scenes take their time and fill you with a slow, creeping dread that's tremendously effective. Unfortunately, that's about five percent of the film. 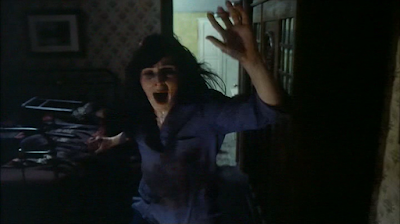 At the very least, it would be a great six minute short film, I suppose.

The other ninety-five percent is composed of a variety of boring, milquetoast genre elements that don't really cohere into a satisfying whole. The mystery at the center of the story is malnourished at best because we barely spend any time with the side characters, and they're certainly not fleshed out beyond maybe a name if we're lucky. Linda herself is barely a character, stuck dwelling on a past we don't get much of a sense of and refusing to betray any sort of personality in the present. She has good romantic chemistry with Jarratt, but this is still a slasher movie willing to dispatch him at any second and deflate any emotional payoff we may have gotten.

Really, the fact that this movie came out in 1982, knee-deep in the slasher boom, is probably its biggest stumbling block. Everything it is and everything it could have been is hobbled by its need to stick to the slasher formula, even though it clearly wants to be an entirely different movie. The body count below seems high, but all but two of those deaths occur offscreen and all but one of them occur in the last fifteen minutes. There's no rhythm to these kills, and that prevents the mystery from having any ticking clock whatsoever. Until the very end of the third act, the stakes are extremely, painfully low. When you're more invested in whether or not Linda will attend the Bush Fire Brigade party than solve a mystery that threatens her life and the lives of a dozen elderly people, there's something wrong with the movie's priorities.

Next of Kin certainly has a sense of abandon when it lets loose that is formidable, and director Tony Williams gets to show off in some intensely spooky sequences, but the film's failures ring loud and clear at almost every point, drowning out everything good about it. It could have been a great haunted house story or a great mystery, but it chooses to be a mediocre slasher. That's the plan that must have made business sense at the time, and it's certainly the only reason I approached this film in the first place, but it really demolishes every ounce of potential, grinding it into a fine dust.

Killer: [Aunt Rita (Bernadette Gibson)]
Final Girl: Linda (Jacki Kerin)
Best Kill: There's not a ton to choose from here, but come on: any murder involving something shoved through a keyhole is gonna win.
Sign of the Times: Frankly, Australia always seems like it could be anywhere from five decades ago to two decades in the future, so I don't have one of these this time.
Scariest Moment: In a nightmare, Linda imagines a drowned old man outside, tapping on her window.
Weirdest Moment: When hiding from the killer in a local diner, Linda sits down and makes a tower out of sugar cubes. Which, frankly, I find extremely relatable.
Champion Dialogue: "There's something evil in this house. Something that lives; breathes the same air."
Body Count: 7; not including a body discovered in a flashback.
TL;DR: Next of Kin has its fun, weird moments, but it's mostly a milquetoast mystery attached to an even more milquetoast slasher.
Rating: 5/10
Word Count: 1102
Also sprach Brennan at 9:17 AM