In anticipation of Deadpool 2, which sees Josh Brolin returning to the world of Marvel as the villain Cable mere weeks after his universe-threatening appearance as Thanos in Avengers: Infinity War, I'll be exploring an 80's slasher where the lead villain also played double duty. In 1989 Robert England continued his landmark role as Freddy Krueger in A Nightmare on Elm Street 5: The Dream Child, but he also played another infamous villain in that same year's The Phantom of the Opera, which we'll be discussing today. 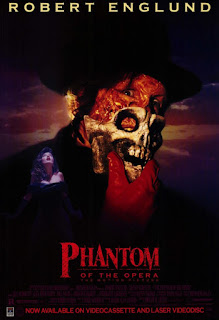 I don't know what it is about classic French literature and pop culture, but two of the most adapted novels in the world are Victor Hugo's Les Misérables and Gaston Leroux's The Phantom of the Opera. Both books have received the movie treatment more than a dozen times apiece, not to mention TV specials, comics (seriously), and modernizations, as well as one extravagantly popular Broadway musical apiece.

Phantom is pretty explicitly a horror novel (though certain people choose to highlight the romance over the monstrous element), so it's not shocking that the genre got its grubby little hands on it, as early as 1925. But what's even less shocking is that 80's horror got a swipe in at the property, because if there was one thing genre filmmakers of the time loved more than a new concept for a slasher movie, it was a well-known property already in the public domain. And why not get Robert Englund, for whom playing a man with a hecked-up face was his bread and butter, and who could at least get some literary cred from playing the role? Toss in the director of the exceedingly solid Halloween 4, the special effects guru behind Chucky, the Crypt Keeper, and Freddy himself, plus 80's shlock mega-producer Menahem Golan, and it's a match made in heaven. 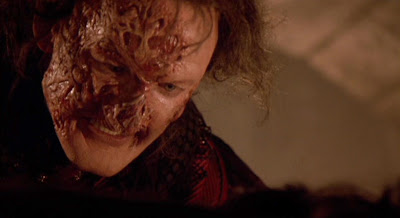 Or hell, if you will.

So, the plot should seem pretty familiar, give or take a couple little embellishments. We start off in the 80's for no clear reason other than to gently ease its viewers into a period piece slasher film, following Christine Day (Jill Schoelen, the queen of late 80's/early 90's B-horror, who at this time was fresh off The Stepfather and Cutting Class) as she scours a rare bookstore for material to use during her opera audition. She stumbles across a battered copy of Don Juan Triumphant, and during her audition is hit on the head with a sandbag (?), which sends her back in time (?) to nineteenth century London, when the piece was first written by Erik Destler (Robert Englund, who was by that point a worldwide cultural phenomenon - that very year he was appearing in Freddy drag on MTV left and right).

Christine doesn't seem to realize that she has been transported back into the past, so this whole thing is pretty pointless. I guess they're going for a Mummy-esque reincarnated love thing, but let's call a spade a spade and not pretend it makes a lick of sense. She is a young soprano understudy for the diva La Carlotta (Stephanie Lawrence), but she receives voice lessons from a mysterious angelic figure known as the Phantom, who murders the piss out of anybody who gets in her way. Anyway, it turns out the Phantom is Erik (duh), who has sold his soul to the devil (?), as portrayed by a little person (?), which has made his face all burned and scarred (??). Cue a lot of bad opera and mediocre slashing. 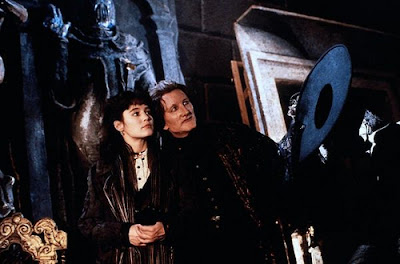 And makeup that's even frightening when it's supposed to seem normal.

Yup, this is one of those cases where the slasher stars seem to have aligned, but alack, those stars got crossed somewhere along the line and it was not meant to be. Phantom of the Opera wants to be a legitimate adaptation of its literary source material and the trashy B-slasher it was always meant to be, but it can't have its cake and stab it too. The slasher elements undercut any ability to take it seriously, and the serious elements make the slasher a bit of a tedious slog.

At every opportunity, Phantom cuts itself short. You can tell it wants to have the quippy punnery of a Freddy Krueger adventure, but then it would tip its hand too far in the "stupid slasher" direction, so it contents itself with some light, playful japing that glances right off the scene and immediately out of one's memory. And it very clearly desires to be an icky, gross-out horror flick, at which it only intermittently succeeds.

Thanks to Kevin Yagher, the moments where the gore comes to the forefront are spectacular. Especially any time we see the Phantom either assembling or dismantling the false skin he wears to get around in the world, it's stomach-churningly gooey grue that lights up the screen. This sensibility is also applied to a certain number of the deaths, especially in the early going, but for some unfathomable reason the bulk of the murders are rendered as run-of-the-mill gut stabbings that completely lack flair and barely shed a drop of blood. 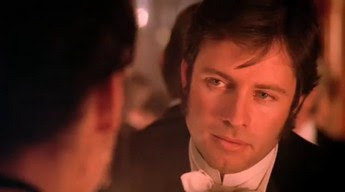 It's telling that this is about the most dynamic screenshot I can find.

That lack of flair isn't isolated to the murder scenes, unfortunately. Although Halloween 4 did sometimes have the tendency to look a bit like a TV movie, at least it had atmosphere. Here, the lighting scheme wouldn't be out of place at a community center bar mitzvah. See, a huge production is made out of candlelit rooms, and the fact that the Phantom lurks in the shadows to hide his twisted visage. But whenever he blows out a candle to hide his face, the room is still so blasted with light that it looks like he's on the set of King of Queens. If anything, the room seemed darker before the candle blew out. The lighting is so conspicuously inappropriate that it drags you cornea-first out of the movie, undermining the character to a ruthlessly extreme degree.

This is a real shame, because Robert Englund clearly cared about this character. The apathy that defines his Dream Child performance is completely absent here, and he's trying his darnedest to assemble something resembling pathos from the role. It all falls apart like a sand castle too close to the tide, but it's not his fault. There is hardly an inch of plot to hang this performance on within the repetitive (yet somehow infrequent) slashings and endless scenes of Jill Schoelen lip syncing to a deeply milquetoast opera track with English lyrics that feel like they were ripped from a seventh grader's songwriting journal.

I dearly wish The Phantom of the Opera had been much better than it was. Period piece horror films aren't exactly a dime a dozen, and when one gets a chunk of change significant enough to make that a reality, I always hope for the best. Unfortunately for the slasher genre in 1989, "the best" was never really an option. It's Robert Englund's best film of the year by a country mile, but that's praise so faint it can't even muster up the energy to damn anything.

Killer: Erik Destler (Robert Englund)
Final Girl: Christine Day (Jill Schoelen)
Best Kill: Most of the kills are pretty bog-standard, but during the Phantom's first kill, blood covers his face as it contorts with orgasmic delight, which is pretty intense. Also eventually the body is hung up in a closet, sans skin, which is likewise rather intense.
Sign of the Times: When she returns to present day, Christine discovers the completed version of Don Juan Triumphant on a floppy disk.
Scariest Moment: When Christine first discovers the pages of the opera and sings them aloud, the notes on the page turn into drops of blood.
Weirdest Moment: Christine's best friend in the framing sequence is played by Molly Shannon in her first film role.
Champion Dialogue: "Better submerged in bathwater than mediocrity."
Body Count: 10
TL;DR: The Phantom of the Opera is an admirable effort, but grafting a slasher onto classic literature rendered both of those things not particularly interesting.
Rating: 5/10
Word Count: 1493
Also sprach Brennan at 8:14 AM