In anticipation of Overboard, a gender-swapped remake of the Kurt Russell/Goldie Hawn vehicle about a handyman who lies to a rich woman after she gets amnesia, this week I’ll be seeing what other hijinks blue collar workers can get up to in the 1988 French-Canadian not-so classic The Carpenter. 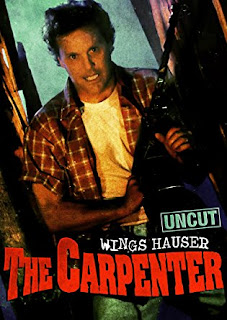 Among the slasher fan community, it is a truth universally acknowledged that the Canadians were damn good at making slasher films. Many established classics like Happy Birthday to Me and My Bloody Valentine came from the Great White North, but I'm here to tell you what I've learned from my many adventures through the subgenre, which is that we might want to localize even further because French Canadian slashers are where it's at.

The two Québécois slashers I have stumbled across have left a lasting impression, immediately rising above the muck of the hundreds of garden variety slashers. First was Visiting Hours, an uncharacteristically character-based hospital slasher that interacted directly with the idea of violence and misogyny and horror in a manner simultaneously horrifying and thoughtful. Now we have The Carpenter, which I cannot wait to talk to you about, so let's get started with that sweet sweet plot! 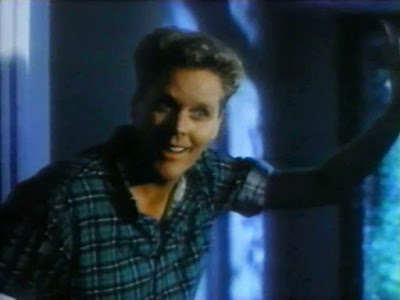 It's not often you get to use the phrase "a Wings Hauser vehicle."

The Carpenter finds its lead Alice Jarrett (Lynne Adams) in the middle of a nervous breakdown, busily slicing up all her husband's suits with a pair of fabric scissors. She is hospitalized and when she's released, she finds out that her husband Martin Jarrette [sic - this is literally how the credits spell it, incomprehensibly] (Pierre Lenoir) has bought a brand new fixer-upper house in the country. She loves it at first, but begins to feel trapped when she realizes that Martin won't let her do anything, from picking out wallpaper to making her own decisions regarding her medication.

There is a team of construction workers remodeling the house during the day, but she discovers one sleepless night that there's an extra carpenter (Wings Hauser) who works late hours, all through the night. He doesn't seem to be working for the other crew, and whenever anyone threatens Alice's well-being, he has an annoying tendency to murder them with construction tools. Nevertheless, she begins to fall in love with him, being the one man who can actually see her worth. Thus begins a twisted tale of romance, revenge, and people being drilled in the f**king throat. 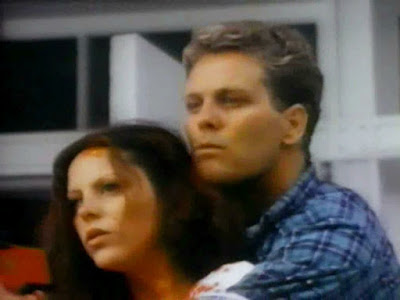 As I hope you can see from the synopsis, The Carpenter is very much about the women's sphere becoming a sort of prison, and the quasi-feminist subtext of the plot is front and center throughout the film's entire run time. I'm not kidding when I say it reminded me a great deal of Rosemary's Baby, although I think it goes without saying that the general filmmaking quality can't touch that film. But who gives a crap about filmmaking quality? This is Census Bloodbath we're talking about!

The Carpenter doesn't cast as much doubt on Alice for potentially hallucinating the Carpenter as I thought it might, which would mirror the way society dismisses women's genuine concerns as "hysteria." But it's still unmistakably about a woman who's trapped between two forms of equally toxic masculinity: one who is keeping her trapped in this house, and one who more or less literally is the house (it later becomes clear that the Carpenter is the ghost of the man who originally built the house, and was a bit of an obsessive about doing all the work himself). 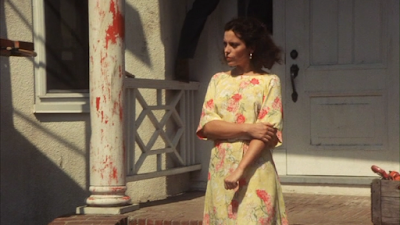 This came out the same year as Cheerleader Camp, so let's just say I'm surprised to find any subtext at all, let alone such a rich vein.

But in addition to its political subtext, which you know I'm an easy lay for, The Carpenter has more uncanny, eerie imagery per pound than the rest of the films in the year put together. The film has a perfectly dreamlike quality that hadn't been captured in North American filmmaking since the first Nightmare on Elm Street four years earlier. Take the opening scene. After a slow motion shot of a buzz saw descending onto a piece of wood which is treated with the cinematic reverence of the obelisk in 2001: A Space Odyssey, we're treated to an absolutely silent scene of Alice's ennui as represented by a truly alarming number of dissolves between different angles on her face. When she finally takes the scissors to her husband's suits, it's a welcome relief to being trapped with her depression for what feels like an eternity, and the rapid cuts of fabric being slashed in different directions is physically satisfying with an intensity that just shouldn't be there.

It's like The Carpenter has harnessed its own filmmaking incompetence to plunge the viewers into a reality entirely unrecognizable as their own. Seriously, that many fades would probably get you a D in a film school project, but in here it just works. The film is full of elements like this that gently suggest a world gone horribly wrong around the fringes of the story we're watching. For example, not more than ten minutes later, when Alice is being released from the hospital, she and her husband check out while in the background an old woman covered in blood is being gently daubed with a washcloth. It's quietly menacing in a way that's truly hypnotic.

This uncanny element sinks deep into the fabric of the film, even infecting the minor characters, from a neurotic paint shop owner to a one-scene sheriff with a manic laugh (played by Ron Lea, who had a small part in Happy Birthday to Me). By the time the Carpenter indulges in a terribly cartoony gimmick in his second scene (as Alice talks to him, every time it cuts back to his side of the conversation he's working on something else, whether it's sawing a 2x4, splitting a brick, or even painting a birdhouse - he's like f**king Bugs Bunny) it makes perfect sense and just serves to underscore the bizarre atmosphere with which the film is already deeply permeated.

After 70 minutes of this, if you're in a receptive mood, once you get to the point where Alice sits in front of a paint can shaker slowly weeping as red paint is splattered across her face, you will be utterly transfixed and horrified. 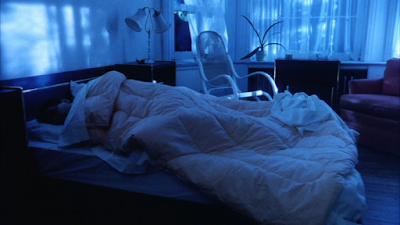 Basically I'm saying The Carpenter is what would happen if Suspiria was remade by Canadians.

Is all of this good? Even now I'm not sure. But it sure is weird, and that's good enough for me. I don't want to give the impression that this is a masterpiece work of art. Take the soundscape, which is very frequently patchy and cuts out roughly in the transitions between scenes. But it also uses the repetitive noises of carpentry to layer over almost every scene and highlight just how off-kilter and insane Alice's perception is starting to be. Is it mediocre? Is it genius? I say it's both.

The only part where The Carpenter slightly fails in my eyes is as an actual slasher, which is a bit of a disappointment. The pacing is a bit mellow, which works for the uncanny atmosphere which is so fascinating, but the kills are few and far between, accompanied by very low rent post-Freddy quips. They're not groaner puns like so many Freddy rip-offs, but they barely make any impression at all because of it. And the gore is undeniably weak, looking like a Monty Python sketch in its best moments. So if you're coming to The Carpenter for a satisfying hack-n-slash adventure, you're not going to be satisfied.

This is one of those movies where I'm not sure I can recommend it. Maybe it was only meant for me and the exact mood I was in the day I watched it. But I dearly, desperately want someone else to see what I saw. It's a film I haven't stopped thinking about in the days since I watched it, and those just don't come around quite as often as I'd like these days.

Killer: The Carpenter (Wings Hauser)
Final Girl: Alice Jarrett (Lynne Adams)
Best Kill: The Black Knight-esque death Roland is doled out, which sees him lose both arms in quick succession.
Sign of the Times: There's an extended scene of Laura Bell slowly easing herself into pants that could easily fit three of her side by side.
Scariest Moment: When Alice walks into the paint shop to apply for a job, the manager is using two brushes as drumsticks as she approaches and keeps pounding as he stares off into space.
Weirdest Moment: In what may or may not be a dream sequence (the way things shake out, I'm going with "not"), the Carpenter unzips his pants and we hear the sound of a drill buzzing.
Champion Dialogue: "Mister! That is a lady you're smacking around!"
Body Count: 5
TL;DR: The Carpenter is a completely uncanny mess that had me transfixed from start to finish.
Rating: 8/10
Word Count: 1604
Also sprach Brennan at 11:12 AM