Everything You've Heard About Me Is True 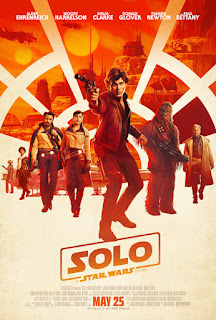 Before we dive in, I want to say a few words. As we can obviously see from the example Marvel is setting, maybe franchise fatigue just doesn't exist anymore, but I think we should remove that argument from the table completely anyway. Disney might be cravenly pumping out sequels in the MCU and the Star Wars universe, but the fact that somehow Hollywood has decided to turn two redheaded stepchild genres (superheroes and science fiction) into massive blockbuster tentpoles every six months or so is not a bad thing. We're living in an unprecedented time for effects spectacle filmmaking and we are very lucky we get to have what we have. That said, Solo: A Star Wars Story kinda sucks, but that's definitely not because I'm fatigued with the genre. It just happens to suck. 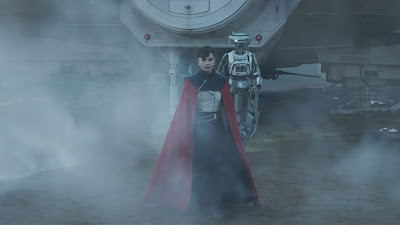 It's OK, it happens to the best of us.

Well, you'll get the answer to all these questions and about twenty million more in Solo: A Star Wars Story. We follow young Han Solo (Alden Ehrenreich) as he escapes from the planet of Dickensian orphans he was born on, unfortunately having to leave his girlfriend Qi'ra (Emilia Clarke) behind. He joins the army with an aim toward eventually earning enough to buy a ship and come back to save her. While he's away and she's not onscreen, he has the opportunity to pretend they actually had chemistry.

Anyway, he falls in with rogue bandit Tobias Beckett (Woody Harrelson) and gets involved in a chain of double-crossing criminal syndicates to pull off a major heist with the help of Chewbacca (Joonas Suotamo), Lando Calrissian (Donald Glover), and the equal rights activist droid L3-37 (Phoebe Waller-Bridge).

This makes even less sense in practice than on paper, but she's still the best character in the movie.

To be completely honest, the one reason I was even remotely interested in watching this movie in the first place was Alden Ehrenreich. Although he certainly doesn't need help getting noticed considering that he made his feature film debut in a Francis Ford Coppola movie (granted, it was Tetro, but still), his true star-making role was in the Coen Brothers' Hail, Caesar!. That movie was barely a movie, rather a series of disjointed shards of humor, but he stole each and every one of those shards like he was in an Ocean's movie, owning the screen for every millisecond he was on it.

Unfortunately, such is the soul-sucking power of Solo that not even Ehrenreich could do anything with the Everest of a role he was handed. He's still charming and does more with it than probably any other actor his age could have (consider Valerian, in which Dane DeHaan was given a very similar role to much lesser effect), but this Solo as written barely resembles the person we met at the beginning of Star Wars, and forty years of nostalgia mixed with the general magnetism of young Harrison Ford just can't be captured by an impression, however solid it may be. And it's not like I'm even a huge fan of the character, so I'm not being precious about his arc or consistency or whatever. But forcing poor Ehrenreich to imitate a well-known badass outlaw while reading the lines of a Skywalkerian young dreamer just doesn't get results. 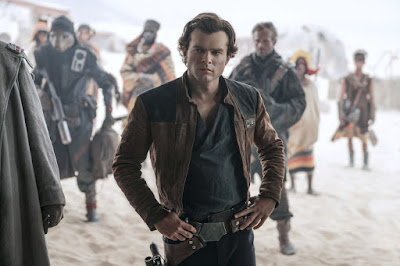 That hair is still working for me, though.

Unfortunately, nobody else seizes their opportunity to steal this movie. Everyone is completely functional in their roles, but there's not a standout among them, not even Donald Glover, who is perfectly fine in his interpretation of Lando's bluster and bravado, but not exactly blowing the roof off. And Emilia Clarke is just inches away from slipping completely into the background.

Everyone and everything is burdened with a script that is abjectly terrible, with scenes falling into place with sickeningly predictable thuds, obliterating subtlety along the way. In addition to committing the worst sin of soft sci-fi (the Aaron Sorkin-esque dialogue the Star Trek movies indulge in so much, in which an entire soliloquy of gleep-glop spacebabble gets split up between five people as if they're having a conversation instead of just reading a paragraph directly from Wookiepedia), this script pulls in an alarming number of hackneyed crime thriller tropes ("If you get into this life, you're in it for good.")

There's not an ounce of finesse to be found. The exposition sprays in every direction like shrapnel, the plot beats and double crossings are hampered by the film's limited scope, and for a movie that's primarily concerned with explaining every single element of Han Solo's character - from his name to his gun to the way he ties his shoes - it opens up an abundance of plot holes that make the whole affair intensely confusing in addition to being infuriatingly stupid. 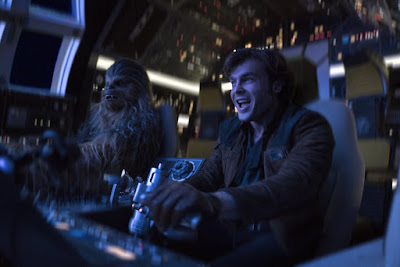 Another of my favorite bad movie tropes is present in spades: Han does something kind of simple and unimpressive and other characters feel the need to comment, "Wow, what a great pilot this kid is!"

Now, there are some good things about this movie. The goofy character design of the Star Wars universe is continued with gusto here, including an awesome old lady space worm and some sort of robot creature that drips orange goo from his mouth pipes. I will always appreciate any movie that embraces the kiddie matinee quality of these films, and there is one terrific action setpiece involving a magnetic train that feels the appropriate amount of popcorn-munching fun. And maybe the most important thing: this is probably the closest we'll get to an acknowledgement that Chewbacca's son Lumpy from The Star Wars Holiday Special is canon.

Really, the worst of Solo is just how mediocre it is (the only wholly terrible thing is the choir of children who burst in on the score from time to time). Even the much storied Kessel run is a jumbled, overstuffed waste of time when it so clearly should have been a sleek, bad-ass race through a meteor field. At every opportunity, Solo takes the safest, blandest route, never pushing itself to do anything but gently nod at Star Wars fans, saying "You know how there was dice before? Here's the dice. Do you see the dice? Make sure you notice the dice. Didn't we do a great job?" I'd warn you away from seeing it in theaters, but judging from that Memorial Day weekend box office pull, that's not something I should be worried about.